"I was attracted to the company’s learners and adapters," Anderson tells Dallas Innovates. "They're a team of people that when you have a problem, they are unencumbered in their ability to innovate to solve the problem."

Dallas-based Spacee is transforming retail businesses with its HoverTouch interactive experiences and tracking inventories with its Deming shelf-mounted robots. So who better to add to their advisory board than a former Best Buy CEO?

“Brad has had a front-row seat for the evolution of retail technology, and brings decades of experience and a fresh new perspective on the current challenges facing retailers,” Spacee founder and CEO Skip Howard said in a statement. “From the very start when we were introduced, he made it clear that he had some fantastic ideas to help Spacee grow. We’re thrilled to have him.”

A great entrepreneur ‘can see the future’ 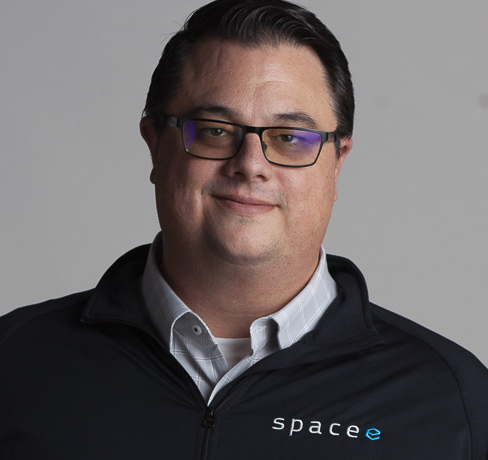 Anderson told Dallas Innovates he was intrigued by Spacee’s Skip Howard for a key reason. So much so, that he’s also become an investor in the company.

“As an entrepreneur, one of the things that makes you a great entrepreneur is you can see the future,” Anderson told us. “And you can see it in a way that’s so tangible that you just know you can make it happen. That’s a powerful trait I think Skip has.”

Another trait that attracted Anderson: “Entrepreneurs I’ve known have this wonderful sense: They can see the opportunity, they can’t see the obstacles. [Skip Howard is] the only one I’ve ever seen who has that kind of innovation engine—and seems to me also personally on the path of wisdom. I’ve never seen that combo before.”

Here’s a look at two innovations Spacee has brought to market:

Perot Jain-backed Spacee was launched in 2013. Using light and motion, the company’s patented technology has led to HoverTouch, a custom augmented reality solution that lets customers interact with 2D and 3D surfaces. We wrote in June about HoverTouch being used at Audi Dallas (above).

Another feature Spacee built in is HoverTouch Connect, which gives retailers, brands, and their agencies control of content, UX, and device management while providing actionable data. The plug-and-play solution can be installed in minutes with no manual calibration or tweaking needed, Spacee said.

Spacee counts Morison’s, Mercedes Benz, Dell, Intel, and NTT Data as clients. Typically working with clients in the retail, automotive, hospitality, and entertainment spaces, the company entered the gambling industry in 2020 in a partnership with Konami Gaming to develop interactive gaming tables with facial recognition capabilities.

Anderson brings big-box retail experience to the Spacee advisory board, having notching 36 years at Best Buy before retiring in 2009. He started out as a salesperson in the 70s for what was then a tech-forward chain of stereo stores called Sound of Music. The small chain was the precursor to Best Buy, where Anderson worked his way up to CEO in 2002.

Anderson spent a lot of time in Dallas while at Best Buy and grew up partially in Fort Worth. So he knows the territory in more ways than one.

“What I’ve gotten to see over the years—nobody should have as much good luck as that,” he said.

Now, with innovations like those that are coming from Spacee, he hopes to see even more.

“My mom is like 99,” Anderson told us. “When she was a little girl they mostly still had horse and buggy. In her lifetime, she’s spanned seeing radio, television, computer, internet—everything has just completely transformed in one lifetime.”

“And I feel the same way in the consumer electronics industry. Over a lifetime I’ve watched things move at an incredible pace—and things are moving much faster now than ever before—historically completely incredible.”

Recalling his early days selling stereo equipment, despite people investing in expensive amplifiers and giant speakers, when the needle hit the record “you still had to put up with crackling and everything else,” he recalls. “[Today] my kids have never heard of anything that didn’t sound right. [What’s happening today] was science fiction when I started as early in ’73.”

“What’s exciting about Spacee,” Anderson said, “is this is a group of people with fundamentally fascinating innovations in industry spaces that are very important. But even more so, I was attracted to the company’s learners and adapters. They’re a team of people that when you have a problem, they are unencumbered in their ability to innovate to solve the problem.”

“It’s like what they did with their HoverTouch technology. When COVID came along, they realized people don’t want to touch surfaces, so they adapted devices to use hand motions. That’s the kind of innovation I’ve seen from Spacee. And it doesn’t take 10 years. Their team of people can do that kind of innovating.”

Anderson says that speaks to the “best of what we’re going to see in future companies and certainly in innovators.”

Over the years, he’s seen iconic innovators, such as Steve Jobs and Sony co-founder Akio Morita, who have shared those traits.

“Deming gives me a better picture of what’s going on inside my business. It doesn’t matter whether it’s a retail store or warehouse,” he said. “I can have a better idea of what’s inside and replenish faster. It’s time-urgent and more accurate. I can measure the financial benefit of doing that.”

Data, curiosity, and the tools to use them

Anderson says Spacee is helping to solve the data challenge for retailers, but also delivering on having the curiosity to innovate and the understanding of the tools involved.

“The reason I invest in Spacee is they seem to have all three at a very early stage,” Anderson said. “You’ve got to have the ability to observe correctly what the challenge is. But then you got to have curiosity and the technical knowledge of the tool set available to you. Then you can see if you can apply it better than anybody else in the space.”

“It’s fascinating that individuals like this have this particular gift. It’s been one of the great joys of my life getting to know people that literally changed the world with that. It’s that same gift. The ability to look at something and say not what is, but what could be.”

One of the first things Howard and Anderson talked about was the talent pool in North Texas.

“I asked Skip: Is the talent here in this community—the culture and the talent—to do this from this platform? And he said enthusiastically, ‘Absolutely.’ And I certainly saw it in the people I met there.”

“If you looked at spaces where you have growing fields for innovation, you’d be hard pressed to figure a much better one than Dallas in the world,” Anderson added. “Anybody that looks at the future [likely] thinks Texas is the best place in the U.S., presuming it retains its core traits.”

Joins three others on Spacee advisory board

“We’re at a critical time in the company’s growth as people are returning to stores, and retailers are under pressure to make consumer experiences interactive and engaging while also collecting data on the shopping experience that is on par with e-commerce data,” Spacee founder and CEO Skip Howard said in a statement.

Crutcher, who owns a management consulting business, is the former top executive at local semiconductor giant Texas Instruments. He also serves on the boards of Mariposa Technology and mmTron.

“[Crutcher, Wellen, and Duncan] all bring valuable insight on leveraging technology to help retailers thrive…as we continue our product innovations in AI and computer vision this year,” CEO Howard said in April.

In July, the National Retail Federation highlighted four companies that are powering retail’s tech transformation—and Spacee was one of them. The NRF cited Spacee’s ability to provide “near-real-time insights for managing inventory and interactive consumer behavior.”

“Spacee’s technology can also help retailers optimize their supply chains, which is especially important as retailers deal with unprecedented challenges and backlogs in global supply chains,” the NRF wrote. “Howard wants policymakers to learn ‘how AI is going to affect the retail market’ and how Spacee ‘solves multibillion-dollar problems for retailers.'”