The Yomi robotic system, developed by Miami-based Neocis, is assisting with dental implants in at least two Dallas-area practices. "It works like a GPS navigation system for the mouth,” says Coppell's Dr. J. Robert Steele. At ArchPoint in Dallas, 172 implants in 90 cases have been placed using Yomi, with patients being "intrigued" by the "minimally invasive experience." 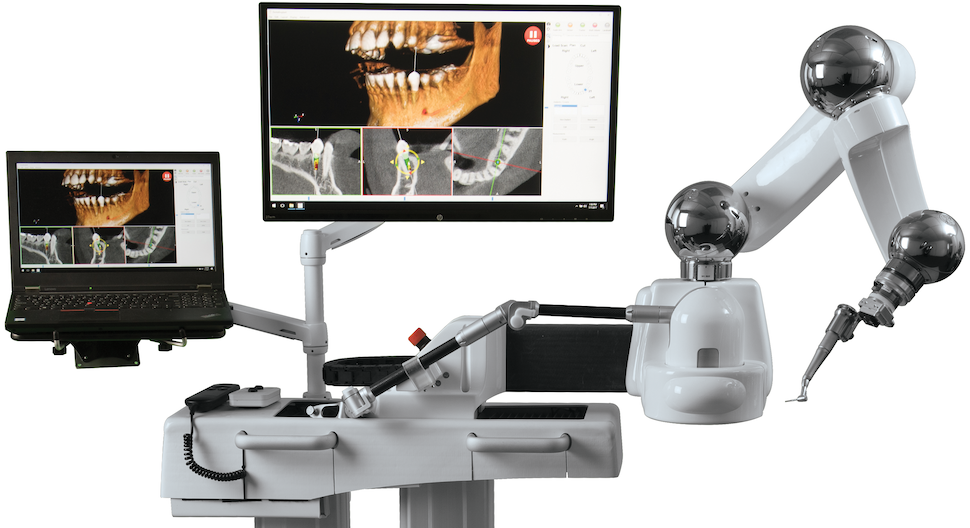 Robots already do lots of things in Dallas-Fort Worth, from polishing your nails to delivering wings to rolling tacos down sidewalks to giving CEOs a lift. But now they’re finally doing something really fun: dental implants.

The Yomi robotic system is the first FDA-cleared robotic device for dental surgery, providing robotic guidance and “delivering repeatable surgical precision,” according to Neocis, the Miami-based startup that developed it.

Dental implants are a leading standard of care for replacing missing teeth, with around 500,000 Americans getting an implant each year. Now Yomi is taking on some of that workload right here in North Texas.

Approved by the FDA in 2017, the system’s use has been pioneered at Boston University’s Henry M. Goldman School of Dental Medicine and the University of West Virginia’s dental school—and now a number of dental practices across the U.S. are using Yomi, including at least two in DFW.

Dallas practices are first in city to use Yomi

ArchPoint Oral & Maxillofacial Surgery and ArchPoint Implant Dentistry are the first practices in Dallas to acquire the Yomi system and use it on patients.

“We’ve placed 172 implants in 90 cases since installing the Yomi robot a few months ago,” ArchPoint’s Dr. Reed Gibbins told Dallas Innovates. “While the technology is new to this area, we’re already seeing an increase in inquiries/bookings and expect the interest to grow exponentially in the coming year.”

“We’re truly bringing the future of dentistry to Dallas with this advanced robotic technology and exceptional surgical care,” Draper said in a statement. “This game-changing surgical approach for single implants and full arch implants options will lead to a new standard of care for the profession, and we’re pleased to be at the forefront of this surgical movement.”

Yomi is used for both the pre-op and surgical phases of dental implant surgery. It works by giving surgeons “real-time guidance in the position, angulation, and depth of the surgical instruments” used in the procedure. ArchPoint says that using Yomi’s minimally invasive technique—a small opening in the gum tissue—”leads to faster recovery after surgery” and “helps ensure the ideal placement of the replacement tooth at the restorative phase.”

‘Researching and training for years’ 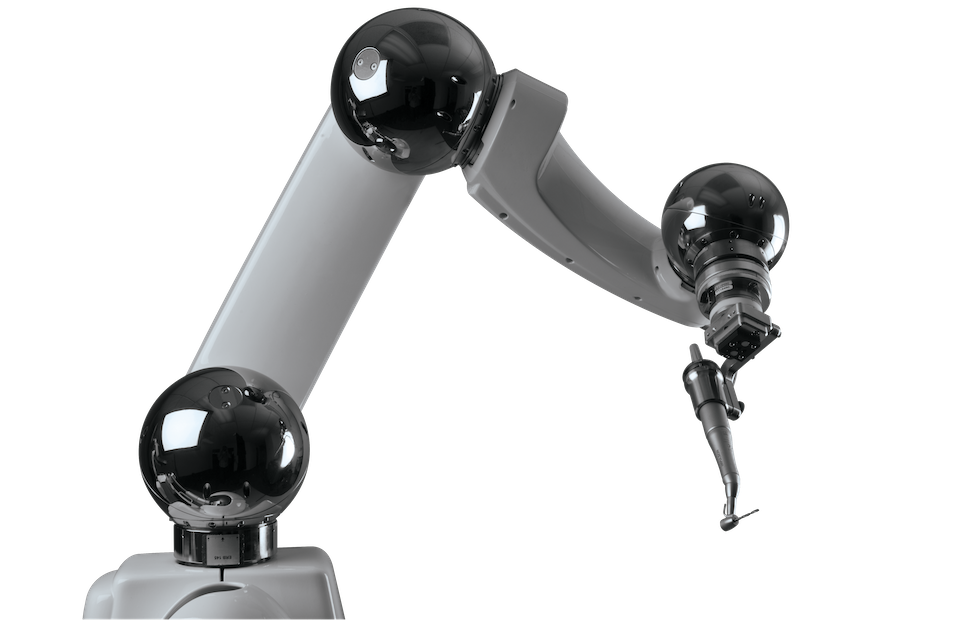 ArchPoint’s Dr. Reed Gibbins says using the robot didn’t happen overnight. Since Yomi was approved by the FDA in 2017, it’s been on his radar.

“The Yomi robot is one of the most exciting new technologies to become available to our specialty in the last decade,” he said in a statement, “and we’ve been researching and training for years to bring it to Dallas and to share with patients and help advance our specialty.”

Gibbins told Dallas Innovates that Neocis, the company that developed Yomi, “have provided our surgeons and staff with a comprehensive training program and continue to provide support for our cases.”

Moving forward, ArchPoint will serve as a training center to introduce other area oral surgeons to Neocis’ robotic system. “Next month we’re introducing a collaborative treatment program between ArchPoint and area dentists to ensure that more dental implant patients will have the option to include Yomi in their surgical process,” Gibbins told us. “Our plan at ArchPoint is to expand this learning opportunity to dental students and oral and maxillofacial residents in the coming year.”

Most patients are ‘intrigued’

For many dental surgery patients, just climbing in the chair can cause anxiety. So how are patients reacting to a robot helping out?

“It’s not uncommon for patients to be nervous regardless of the treatment being performed in the oral surgery office,” Gibbins told us. “Given that, we haven’t noticed an increase in anxiety over the technology. We explain that this is considered a minimally invasive technique using a small opening in the gum tissue.”

ArchPoint also provides options for patients based on their level of anxiety, including IV sedation.

“If a dental implant or implants are needed, we introduce the concept of the guided robotic surgery to the patient,” Gibbins said. “We let them see the Yomi firsthand and explain how it is used to aid us in precision implant placement.  Most of our patients are intrigued and excited to learn about the technology.”

The Yomi robotic device does away with some traditional techniques, and offers real-time solutions for needed adjustments.

“Traditionally, guided implant surgery was done using static guides,” Gibbins said. “These guides needed to be prefabricated and then rely on nearby teeth or bone to be secured.  Discrepancies during the manufacturing process could lead to improper fit.”

“Additionally, if, during the treatment, the surgeon felt the plan needed to be altered, then the guide would need to be abandoned.  With Yomi, if an adjustment needs to be made, it only requires a few clicks of a mouse and then we’re ready to continue with the procedure.”

“Since a guide isn’t being manufactured,” Gibbins added, “a patient seeking quick treatment could have a Cone Beam CT scan, and minutes later be in the chair receiving treatment.”

Coppell’s Dr. Steele: ‘Works like a GPS navigation system for the mouth’ 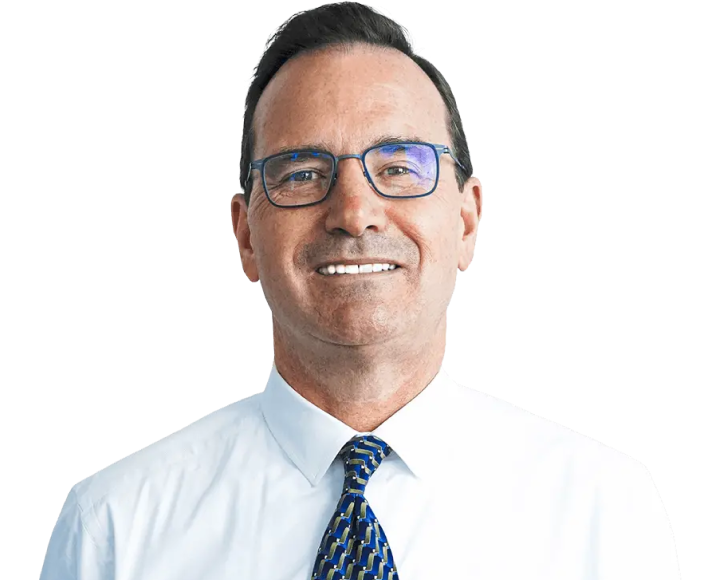 “It works like a GPS navigation system for the mouth,” Steele told Spectrum News 1. “I always have control of the drill and can always go back and change the treatment plan if needed. The robot is simply an assistant so that I can perform a faster and more precise implant procedure with less pain.”

Steele told Spectrum he wishes he’d had the Yomi system when he began doing implants decades ago.

“There’s not many opportunities in dentistry for this type of technology,” Dr. Steele said. “This kind of advance comes along once every 10 to 15 years. Once I saw this technology and what it could do for my patients, I had to add it to my office.”

A Yomi creator started out with ESPN’s ‘pitch tracker’

Yomi’s orgin story has an interesting twist: One of its developers started out at Sportsvision, a special effects company that created those yellow lines that mark first down distances in NFL broadcasts.

Neocis was founded in Miami in 2009 by Alon Mozes, PhD, and Juan Salcedo, who’ve been working on surgical robotics for over 20 years.

While working at Sportsvision, Mozes won an Emmy for developing the baseball pitch tracker “K-Zone Effect” on ESPN.

“The technology used for those effects closely parallels the technology used in robotic surgery,” Neocis says on its website. “Hardware and software engineering for camera-tracking of a baseball pitch is similar to robots tracking real-time surgical and patient movement.”

Dad was a dentist

Mozes then moved to Mako Surgical, a Florida medical device company, where he met Salcedo. As principal design engineers, they developed the RIO system for guided orthopedics surgery, which helped lead to Mako’s IPO and subsequent sale to Stryker in 2013, Neocis says.

Mozes’ father is an endodonist, which led Mozes and Salcedo to consider creating a robotics device for dentists. They developed and patented a prototype that could assist in implant surgery, naming it “Yomi” after a family dentist friend. The rest is history—and could be waiting for you in a dentist’s chair sometime soon.