Game On: North Texas is a ‘High-Tech Entertainment’ Paradise

Check out this roundup of who's playing what where.

Technology can move mountains, disrupt industries, and change the world. It can also be a total blast—and companies are proving that all over Dallas-Fort Worth. In the past few years, North Texas has become one of the world’s leading showplaces of high-tech entertainment concepts.

Welcome to ground zero for getting your game on—with reimagined ways to play golf, soccer, shuffleboard, video games, tag, and more. From the latest cutting-edge Ferris wheel technology to an indoor “circus” of tech-enabled games, here’s a roundup of how North Texas is reinventing fun:

Activate Games says it offers “the next level in entertainment, fitness, and gaming.” Its six locations in Canada and the U.S. have up to 11 rooms with laser mazes, touch-activated climbing walls, arcade-style target walls, light-flashing basketball hoops, and more—with your score tracked by an RFID bracelet. You can “put your brain and body to the test” when the new Plano location opens as soon as the end of this year.

Step Into the Celeb-Backed Sandbox for Full-Body Virtual Reality

Inspired by Star Trek’s Holodeck, San Francisco-based Sandbox VR’s exclusive worlds let you feel like you’re in a game or movie. Built by EA, Sony, and Ubisoft veterans, Sandbox VR’s immersive metaverse experience offers “full-body” virtual reality. Now in both Dallas and Fort Worth, you can don a helmet and body gear and grab your virtual weapon to play one of six games including Star Trek: Discovery, Deadwood Valley, Amber Sky 2088, Curse of Davy Jones, Deadwood Mansion, and UFL: Unbound Fighting League. Sandbox VR says it offers “a futuristic VR experience for groups of up to six where you can see and physically interact with everyone inside, just like the real world. The company’s backers include Justin Timberlake, Katy Perry, Kevin Durant, and Will Smith. 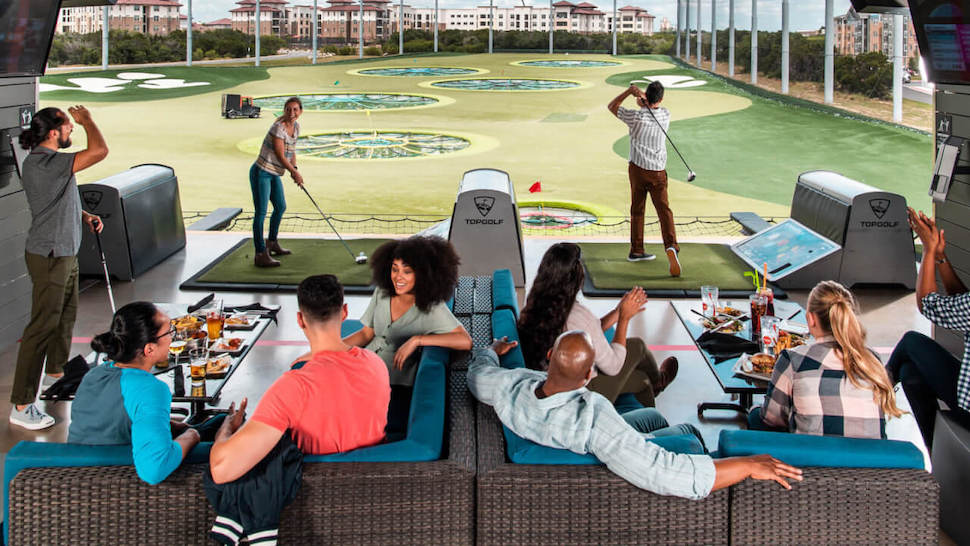 North Texas has become a “Golf Mecca” for many reasons. The PGA of America is creating a “Silicon Valley of golf” by moving its HQ from Florida to Frisco. Dallas is the home of ClubCorp, the largest owner and operator of golf facilities in the U.S., and Arcis Golf, America’s second-largest.

But we really shine by making golf more fun. Dallas is the home of Topgolf, Drive Shack, BigShots, and Puttery—all of which have turned classic golf into high-tech entertainment concepts.

Topgolf (above) leads the pack with 65 venues in the U.S. and more in the U.K., Australia, Mexico, Germany, and the United Arab Emirates. As we wrote last summer, it’s pursuing a goal of continued expansion and innovation. 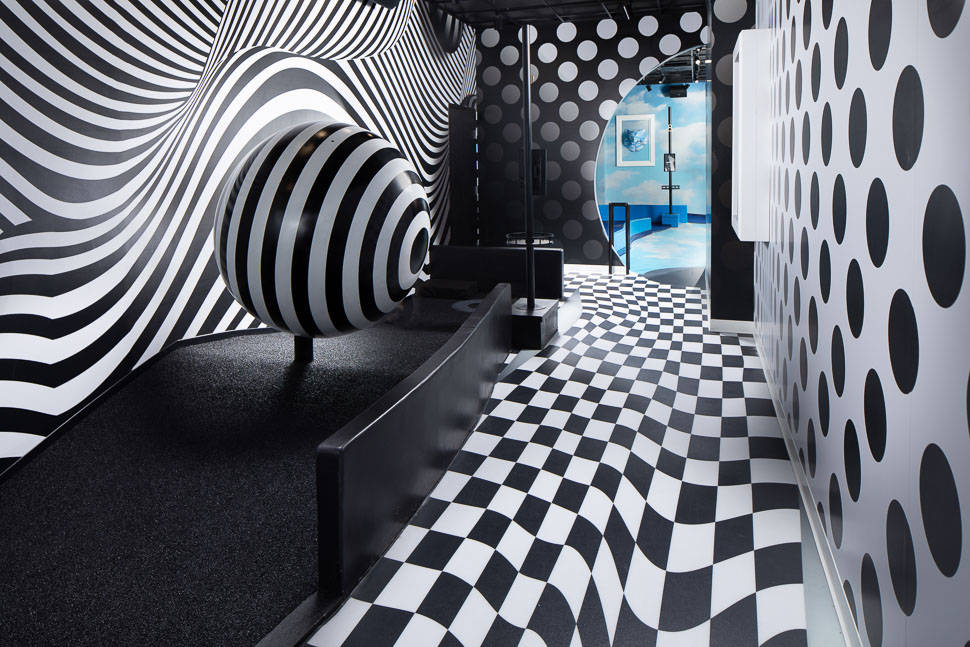 Drive Shack is a Topgolf rival that debuted a whole new concept last summer—Puttery, a high-tech, totally reimagined version of miniature golf mixed with cocktails and food in an adults-only playground. It opened one of its first venues at Grandscape in The Colony just north of Dallas, and will soon open its ninth in New York City’s chic Meatpacking District.

Meanwhile, Dallas-based ClubCorp is rolling out more of its BigShots golf entertainment venues, with one in Fort Worth and five more spread out from Bryan, Texas, to as far away as Northwick Park, U.K.

And Dallas companies Flite Golf and Century Golf have partnered to bring gamification tech to golf ranges and golf entertainment venues across the U.S.—with help from Senior Advisor Ken May, former CEO of Topgolf, Drive Shack, and FedEx Office.

Soccer Gets a New Kick in Big D 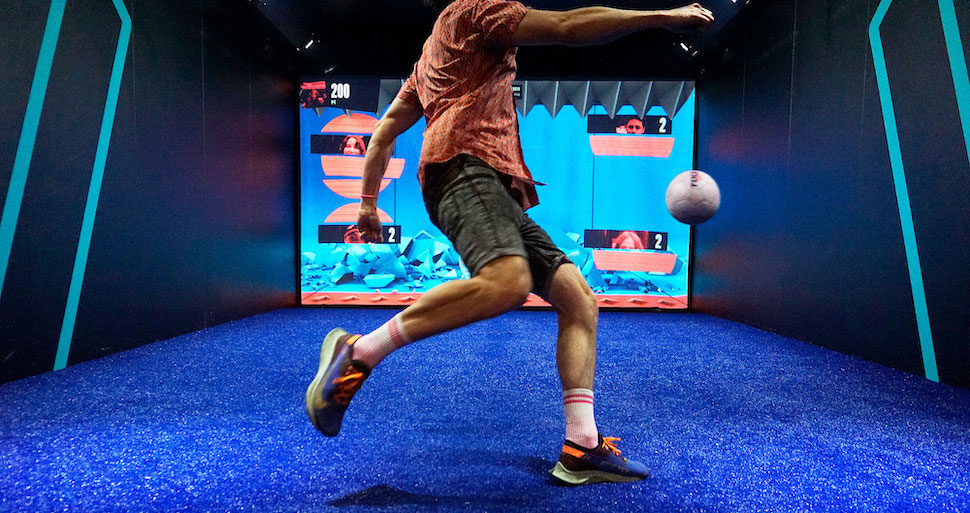 In a TOCA box, a ball is launched at a player with targets waiting on the video screen. [Photo: TOCA Social]

Everyone knows soccer is huge in England—but it got an even bigger pop culture kick when TOCA Social opened last year in The O2, London’s live entertainment and retail destination. The venue has attracted stars from top English football clubs as well as celebs, influencers, and even cast members from “Ted Lasso.”

Now a TOCA Social is coming to the Dallas Design District near downtown, offering “world-class” cuisine, bars with sweeping views, and immersive target-game “TOCA boxes.” In the Dallas location’s 34 TOCA boxes, groups will be able to eat, drink, and take turns fielding and kicking soccer balls at gamified video-screens.

Slated to open in early 2023, TOCA Social will be a three-level, industrial-style showplace built atop an existing warehouse at 1313 Riverfront Blvd.

TOCA is a soccer term that comes from the Spanish word for “touch.” It means having a good touch on the ball, especially your first touch in a play. So why did the company touch down in Dallas for its first U.S. venue?

Its first level will hold 27 TOCA boxes, along with the main bar and a dessert bar called Sweet Finish. The second floor will have seven TOCA boxes and a “really amazing, 5,000-square-foot outdoor patio with bonkers views of downtown.” The third floor will be a climate-controlled bar, with accordion glass doors that open in good weather, offering what Shor calls “the best place to have a view of downtown with a great cocktail in your hand in the city of Dallas.”

Two Bit Circus, a “micro-amusement park” concept that first launched in Los Angeles, is expanding this fall to its second U.S. location in Dallas’ The Shops at Park Lane, near NorthPark.

The new venue will offer 35,000 square feet of tech-enhanced entertainment that fuses the latest interactive technology with the “wonder and spectacle of classic circus and carnival.”

Its main bar features a 20-foot LED TV, a mixology bar, and a 40-tap self-pour beer & wine wall. The hybrid sporting venue and sports bar is designed to be “a convergence of e-sports, augmented reality, simulation, and immersive technology.” It all comes with a “global menu” featuring tacos, flatbreads, wings, and sushi.

Gaming in an ‘Electric Gamebox’

Why just play video games when you can be inside one? That’s the thinking behind Electric Gamebox. The immersive group gaming platform has locations in three U.K. cities and one in the Grandscape complex in The Colony north of Dallas.

Shuffleboard used to be as old-school as it gets: a long, sandy wooden table with metal pucks rolling silently down to click their way to victory. That was before Electric Shuffle got ahold of it and turned it into a series of high-tech concept bars.

Like other concepts on this list, Electric Shuffle got its start in the U.K. before seeking a home in America—and setting its sights squarely on Dallas-Fort Worth. The first U.S. location opened last fall at 2615 Elm Street in Deep Ellum.

The bar-eaterie “reimagines” shuffleboard with “unparalleled vision technology” for an immersive, highly social experience. With several different competition areas on tap, teams of up to 16 players can compete in the three featured games.

We keep saying “Grandscape,” and it’s no coincidence: the shopping/dining/entertainment complex in The Colony—located off Highway 121/Sam Rayburn Tollway and just west of North Dallas Tollway—has become a destination for all kinds of entertainment experiences.

One new reason: the Grandscape Wheel, which follows the trend of plus-sized, cutting-edge Ferris wheels worldwide. At 180 feet tall, it opened last September, Second in height in Texas only to the Texas Star in Dallas’ Fair Park, it was designed by Netherlands-based Dutch Wheels and features 42 climate-controlled, music-playing gondolas that hold up to eight people each. It also has a VIP glass-bottom floor gondola with Ferrari-style leather seats for four.

Okay, let’s say you’re not a techie-type person. If you prefer your entertainment concepts totally analogue and real-world, look no further than Fowling Warehouse, coming to East Plano in summer 2022.

Fowling (rhymes with “bowling”) is easy to explain. You pick up a football and throw it 48 feet to knock over a set of bowling pins. Five other locations nationwide are already offering this experience, with a sixth on the way in Ann Arbor later this year. Like the one coming to Plano, they all come with a full bar, a beer garden, and live music performances.

From the National Videogame Museum in Frisco to the Perot Museum’s newly revamped “speed wall” in Dallas, along with a wide array of video game arcades and bars across DFW you’ll find plenty to do. There are all kinds of new concepts being cooked up right now by innovative entrepreneurs. With other experimental entertainment like the Museum of Illusions in Dallas and the Sweet Tooth Hotel pop-up exhibits across the region, there’s almost no limit to new kinds of fun you can have in Dallas-Fort Worth. Stay tuned and we’ll let you know what’s coming next!