The Department of Energy grant went to a UTD mechanical engineering professor and his team. If successful, the project could make a new technology that produces electricity cost effectively and reliably offshore.

The University of Texas is moving forward on a research project to develop technology for offshore wind turbine systems—a project that could be the future of renewable energy.

The U.S. Department of Energy and the Advanced Research Projects Agency-Energy awarded UTD researcher Dr. Todd Griffith a $3.3 million grant to support ongoing development of high-tech wind energy research. Griffith has spent years working on the design of an offshore wind turbine, and the money is now going to take the project to the next level.

“Texans continue to show national leadership in developing the next generation of wind technology, and UTD’s work will position our region to reap the benefits of the jobs that go along with it,” Congressman Colin Allred said in a recent announcement. “As we look to our recovery after this crisis, it is more important than ever that we support programs like ARPA-E, which provide critical funding to our universities to develop new clean energy technology.”

The grant is part of ARPA-E’s Atlantis program, which gave out $26 million in funding to accelerate floating offshore wind turbine tech. Congressman Allred is a cosponsor of the bipartisan ARPA-E Reauthorization Act of 2019, which is led by Congresswoman Eddie Bernice Johnson.

The grant was initially announced back in December, but was recently awarded to Griffith and his team. That means the project can officially begin.

Griffith, who joined UTD in 2017, began investigating vertical axis wind turbine designs in 2009 at Sandia National Laboratories’ Wind Energy Technologies Department. His design converts winds over the deep-sea into electricity. The turbine, which would sit at least 20 miles from the coast, has blades that vertically rise above the ocean’s surfaces. Griffith compares it to an upended eggbeater.

First up is the design and production of the specs. The design team and an experienced fabricator are already in place and ready to go. Ultimately, Griffith says, the group aims to design a system that would have a height mimicking the tallest building Dallas. 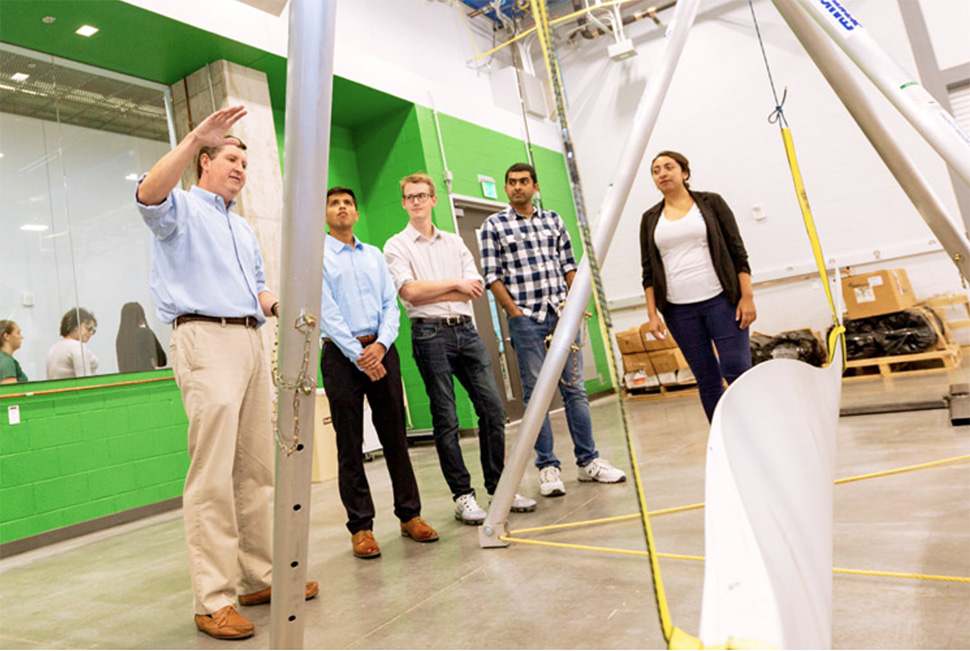 “Initially, we’ll be building something at a much smaller scale, maybe 10-12 feet tall, so that it can be tested in the wind tunnel. Then we’ll be building a prototype,” he told us. “In the wind tunnel we’re evaluating the aerodynamic performance, how the forces are transferred to the components, how we would do the control system—those kind of details. It really gets some data that will help us know if our design calculations are accurate. And, how good the performance of our design is.”

Griffith says that first check always wants to be done at a smaller, more cost-effective scale. From there, the prototype will be tested on a floating platform in a wind and wave tank testing basin at the University of Maine. The tank can simulate wind and waves similar to the ocean.

“It will still be sub-scale, but that will be a bit more sophisticated prototype, since it’s floating,” Griffith says. “We’ll be able to check out how the full system works together. This project is two years—if we’re successful, we’ll plan to build something even bigger, and then move to the open ocean in the East Coast, West Coast, or Gulf of Mexico. And we’ll do a larger prototype test there.”

From there, the team would move into another two year phase of testing with larger prototypes. Griffith estimates it could be a 1/10th scale at that time, which is still pretty significant.

“Then after that, if we’re successful in those stages, I could see in the 5-10 year time frame we could go to a full scale system for prototyping,” he says. “It’s pretty aggressive, but this is what we’re pushing for.”

Why this is important

The project is needed because a traditional three-blade horizontal axis turbine doesn’t tend to work deep in the ocean—it’s better for land and shallow water. Griffith’s design would lower the cost and connect to already existing energy grids with underwater cables, which helps with any installation challenges that may arise. He says any offshore operations are typically more expensive than those on land.

“Any operations that we do in the offshore environment are going to be more expensive than those on land. The land-based wind energy industry has been quite successful in driving down cost. We all love having a reliable electricity supply and we all love having low cost electricity. On land, wind energy has been able to do that,” Griffith says. “Going offshore, those costs are much higher.”

Griffith says his solution is a new type of turbine that’s specifically designed for offshore.

“Taking the turbine that’s on land and then moving it offshore is not a cost-optimal design solution,” he says. “So what we’re proposing is a different type of turbine that has many inherent advantages for reducing costs and improving reliability offshore.”

The project involves cross-collaboration with partners who are working toward a similar end goal.

UT Dallas researchers, with Griffith in the lead, are teaming up with the University of Illinois at Urbana-Champaign, Aquanis Inc., VL Offshore and XFlow Energy. The UT Dallas team will include doctoral students, postdoctoral researchers, and Dr. Mario Rotea, the Erik Jonsson Chair and head of mechanical engineering.

Griffith, also an associate professor of mechanical engineering in the Erik Jonsson School of Engineering and Computer Science, emphasizes what a rewarding opportunity this is for students—those that might directly work on the project and even younger students that might have the opportunity to visit UTD.

“I encourage students out there to consider engineering as a career because it’s really a great opportunity to create the future. That’s what we’re hoping to do with this project,” he says. “If this is successful, we could have a new technology that produces electricity cost effectively and reliably offshore. There’s a huge potential in developing what could be a new industry, and a potential for job creation in many, many different sectors. There are some major potential benefits of pursuing this really high risk, high reward type of research.”

Education
The Last Word: Brother Bill’s Blane Rogers on the Impact of a Food Pantry at the West Dallas STEM School