We spoke with Vari CEO Jason McCann about the Coppell-based workspace innovation company's renovations, its new products, and how businesses can get ready for the new normal.

Despite the COVID-19 crisis resulting in around 95 percent of Vari’s employees to work from home, CEO and Co-founder Jason McCann and his team have been anything but stagnant. Vari, which may be best known for its disruptive standing desks, had a multi-million dollar rebrand in February that included a name change.  Now the workspace innovation company formerly known as VariDesk is in the process of renovating its headquarters, developing new designs, and moving forward.

Like most companies, Vari has had to restructure its daily operations in response to the pandemic. That transition was easy, since the company is already designed to function 100 percent remotely, McCann says.

Within four hours, Vari was fully operational with its 350 employees. “From day one,” McCann notes, “we built the company to always be nimble, just in case.”

Once McCann’s team realized everyone was going to be working from home for an extended period of time, they sent out surveys to employees asking what they needed most. Vari has provided them with everything from its iconic sit-stand desks to computer monitors and chairs. Now it’s working with other companies to help them do the same.

Vari also has donated 500 masks, while its team members have been putting in volunteer time.

“Nothing has stopped by leaning into our values,” McCann told Dallas Innovates. “So it’s been a challenging chapter, but I think we’re all going to come out stronger for it.”

McCann and his team aren’t just thinking about how Vari is functioning in the present, either. Beyond working from home, Vari has been looking ahead to what the workplace be like once everyone can return to the office and address what McCann calls “the new normal.”

That’s why Vari is already in the process of renovating its 70,000-square-foot headquarters in Coppell to face “the new normal” head-on.

Renovating for the new normal

Many companies pride themselves on having an open and collaborative office space. Vari is no different, but with social distancing measures needing to be put in place, that’s all going to change—at least for a while. 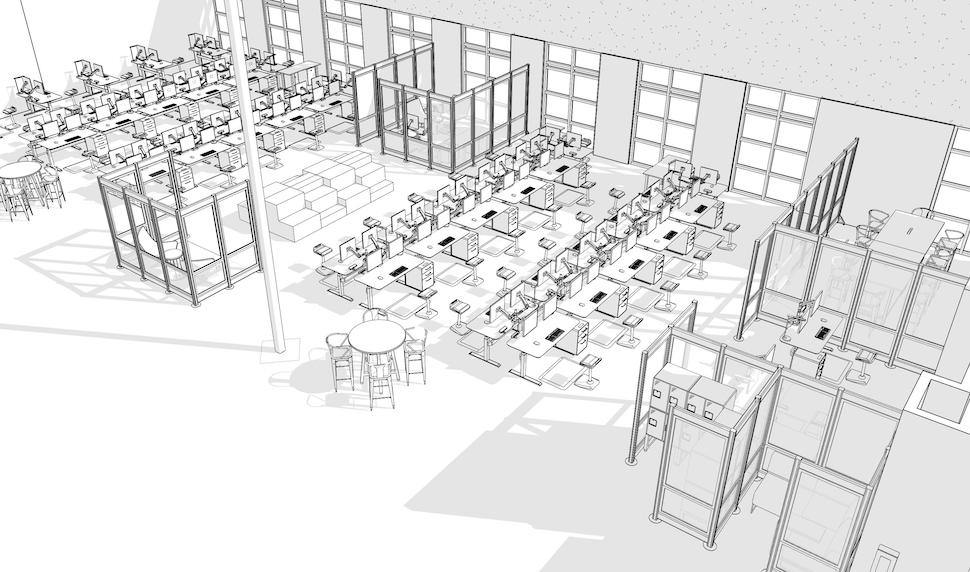 A rendering of what Vari’s HQ looked like before renovations. [Image: Courtesy Vari]

In direct response to COVID-19, Vari has set to work restructuring its headquarters. Much of the redesign is focused on distancing and keeping spaces sanitized, while mostly using Vari’s own products.

Employee workspaces will be spaced six feet apart, privacy panels and natural barriers such as “living walls” made of plants will be added, and the amount of “focus pods” for individuals will be increased—all to facilitate social distancing.

To keep the Vari team healthy, temperature scanning tech will be implemented at entrances, more hand sanitizer and Clorox wipe stations will be added, and some doors and door handles will be removed to reduce contact points. Over one percent of Vari’s staff is already dedicated to cleaning, with four housekeepers splitting morning and night shifts.

All of the renovations are expected to be complete by May 4, which may seem like a quick turnaround, but with Vari’s designs, the team is able to build an office in less than an hour, according to McCann.

“Our solution has been designed for companies that are fast-growing, and so they’re always changing,” he says. “We don’t believe in sheetrock and things like that that provide too much permanent space.”

Although all of these renovations may not be perfect, McCann calls Vari’s headquarters “a living, breathing ideation lab” where they can try and learn about what works and what doesn’t. Even if some or all of the furniture and additional walls that Vari brings in don’t feel suitable within the next few months or years, Vari’s products can easily be restructured.

“Spaces are going to continue to flex and change over time, based upon the needs and so everything we design at Vari is around flexibility,” McCann says.

VariSpace, which is Vari’s space-as-a-service concept combining amenities and flexible space solutions in multi-tenant campuses, has similar changes being made at its Las Colinas location, such as privacy panels, temperature scanners, and hand sanitizer stations. Its Southlake location, which is currently under construction and is expected to open in August, will also be following the best practices.

Vari is accelerating production on its 24-inch clear acrylic panels, which people originally thought were “so big,” McCann says. But with the ongoing pandemic, many are thinking about the need to distance themselves from others—so the panels make more sense now than ever.

Vari also designed a sofa meant for two to three people that’s now being redone for one person. Other single-seat designs are also being accelerated and are expected to be available soon. Vari is also prototyping products with built-in wipe pull stations and hand sanitizer.

“We’re able to create plenty of dividers, leverage our current products, just really rethink how they’re deployed inside of the building,” McCann says. 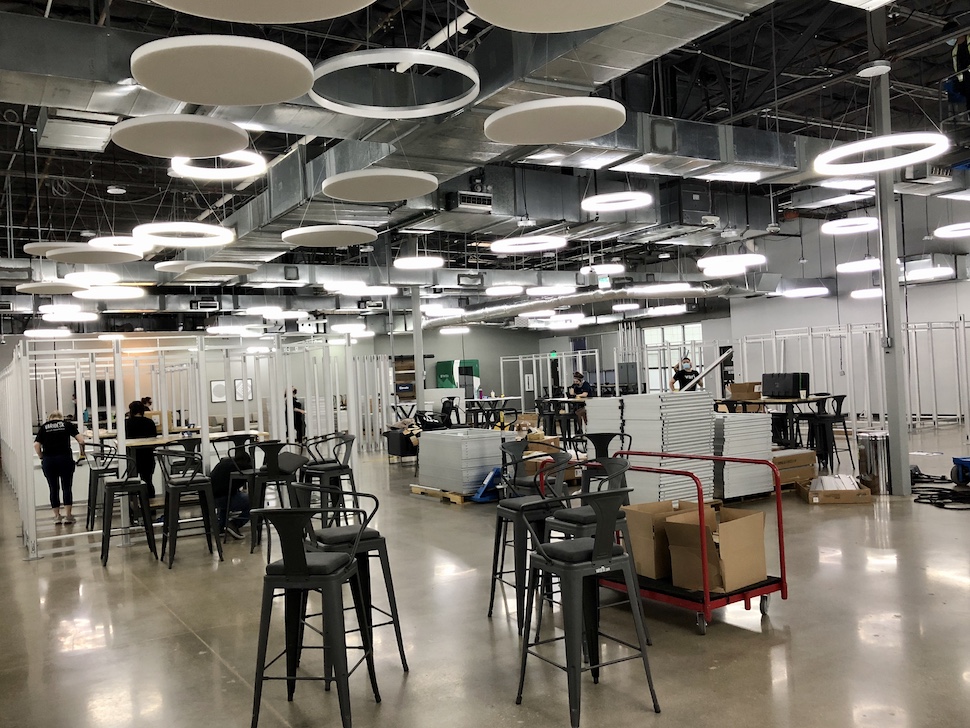 Vari’s headquarters used to have only one coffee bar, which McCann says was seen as a “collision point” for collaboration. With the new measures being put in place for the safety and health of employees, even conversations around the coffee machine will have to adjust. But with the help of technology, there are still ways around this.

“I think the power of Zoom and MS team meetings has been very, very good. So I still see a lot of collaboration can happen that way,” McCann says. “I think there is a beautiful energy that happens in a space when people are together, but we’re just going to have to short term and until it’s appropriate, recognize social distancing.”

One additional measure that Vari is taking is only having four chairs in conference rooms that would typically allow 8 to 10 people. McCann doesn’t believe all of these measures will last forever, though.

“I see us slowly ramping back into what is ‘the new normal,'” he says. “The pendulum obviously swung really hard to work from home and so we’ll all come back and we’ll find a new balance and a new normal that I think will be very healthy for organizations and for people, as well as the environment.”