An inaugural class of 60 students will begin this summer at the medical school, which emphasizes efficiency, holistic learning, and immersion training in real clinical settings.

The medical school will be based in the Interdisciplinary Research and Education Building, left, at the University of North Texas Health Science Center west of downtown Fort Worth. [Photo: Courtesy UNTHSC]

For generations, medical school has meant two years of lectures and memorization for tests—with little connection to the practice of healthcare or interacting with patients—followed by two years of grueling hours in the hospital. Texas Christian University and the UNT Health Science Center’s new medical school in Fort Worth is hoping to turn that tradition on its head.

The first class of 60 students will begin this summer, and they will experience a curriculum that differs from the traditional model. Efficiency, holistic learning, and real-world application are top of mind for the new school.

While there already is a medical school in Dallas and an osteopathic medicine school in Fort Worth, Dean Dr. Stuart Flynn says that more physicians are needed because of Texas’ shortage. He also hopes the school will be a boon to the local economy and will attract biotech, pharmaceuticals, and other industries to grow businesses in the nation’s 15th largest city.

Also, on Tuesday, the school of medicine announced that it had received a gift from Dr. John M. Geesbreght to establish the John M. Geesbreght, M.D., M.S., FACEP Endowed Chair of Emergency Medicine. Terence McCarthy, M.D. was named the inaugural recipient.

Medical school will ‘train where physicians are going to practice’

What really stands out about the new school is its curriculum.

Most medical students today watch recorded lectures on one-and-a-half speed while taking notes, and only come to class when they have to take a test, regurgitating scientific concepts that they may never use again.

The Fort Worth school will flip the classroom. Rather than have lecturers speaking to empty auditoriums, the school will provide videos and reading to be studied at home, and students will come to class for discussions, collaboration, and application of what they have learned.

The rotations will also break the mold of traditional medical school. Students get most of their clinical practice in a hospital during medical school, even though most practitioners end up working in a clinic setting. At TCU, students will spend 10 months in ambulatory settings such as clinics.

Finally, medical schools as they currently exist self-select for those who can memorize well, study efficiently, and take multiple choice tests. 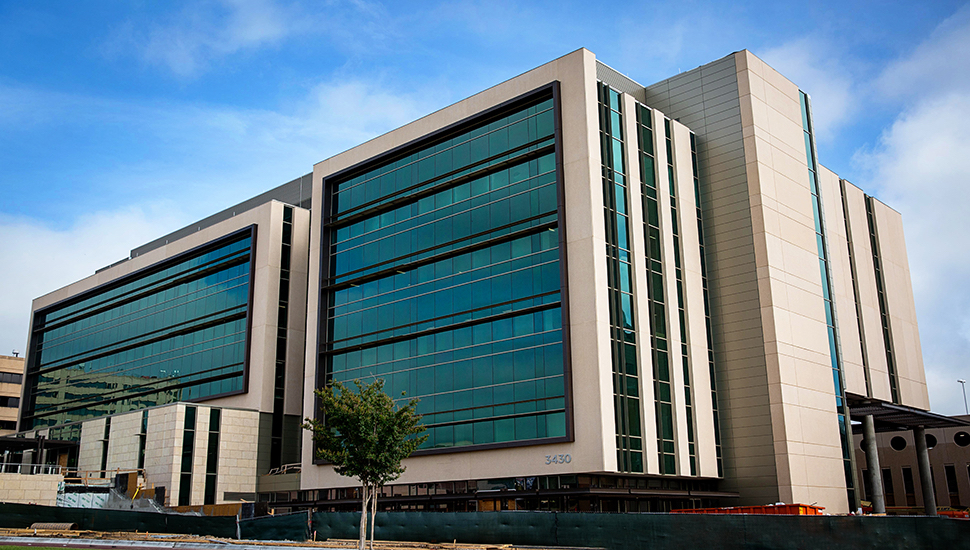 Unfortunately, these skills will not be as important once the doctor is interacting with patients, managing staff, and collaboratively making decisions.

The school, which is also home to the  will pursue an interdisciplinary team model of care that places the patient at its core via cutting-edge technology, enhances communications among the caregivers, and focuses on safety.

“The reality is they aren’t taught how to communicate,” Flynn says. The new school will have a four-year “compassion curriculum,” to help medical students communicate better and be more empathetic, and admissions will be prioritizing those skills that most medical schools don’t emphasize.

Before coming to Fort Worth, Flynn was the founding dean for a Phoenix medical school at the University of Arizona. He says he’s excited about Fort Worth’s prospects.

“There is a clean slate here, and this is how we have to train the next generation of physicians,” he says. “We can’t keep doing what we are doing.”

Administrative offices for the School of Medicine will be at the Interdisciplinary Research and Education Building. [Photo: Courtesy UNTHSC]