In this weekly roundup of research and development activity in North Texas, you’ll also find news on UTSW and the American Heart Association examining cardiac concerns, as well as Cook Children’s in Fort Worth receiving a grant to bolster research. 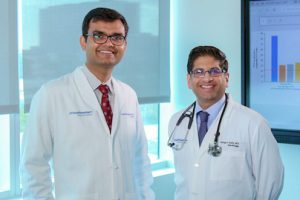 Drs. Ambarish Pandey, left, and Parag Joshi believe some patients at risk of heart disease could be helped by a biomarker blood test. [Photo: UT Southwestern]

According to a new study, the researchers pooled patient data from three major patient populations, which include multiple ethnicities and encompasses roughly 13,000 people.

Researchers asked whether measuring levels of two biomarkers, which are proteins in the blood, would identify people in need of treatment. They found that roughly one-third of adults with mild hypertension (abnormally high blood pressure) who are not currently recommended for treatment have slight elevations of one of these two biomarkers.

And, researchers discovered that those individuals were more likely to have heart attacks, strokes, or congestive heart failure over the next 10 years. The scientists noted that those patients are “flying under the radar” and don’t know that they have an elevated risk for cardiovascular events.

“We think this type of test can help in the shared decision-making process for patients who need more information about their risk,” Dr. Parag Joshi, a preventive cardiologist and assistant professor of Internal Medicine at UTSW, said in a statement. “These blood tests are easily accessible and are less expensive than some other tests for risk assessment.”

The researchers, led by Dr. Joshi and Dr. Pandey, looked at data from 12,987 participants (mean age 55 years and 55 percent female) who experienced 825 cardiovascular events, such as heart attacks and strokes, over a median follow-up time of 10 years, according to a statement.

In other heart-related news, research is expected to be presented this weekend at American Heart Association Scientific Sessions 2019 in Philadelphia, which will tackle a variety of concerns related to people with heart disease.

The Association’s Scientific Sessions is a yearly global exchange of the latest advances in cardiovascular science for researchers and clinicians and runs Nov. 16-18. The American Heart Association is based in Dallas.

During the event, research will first be presented at the association’s Resuscitation Science Symposium, which highlights that bystanders who fail to attempt CPR because they fear legal liability actually face a higher likelihood of litigation for delaying or failing to intervene. Although every state has “Good Samaritan” laws that offer legal protection to people who give reasonable assistance to others that they believe to be injured or in peril, there are still concerns about legal liability, according to a statement.

In another session, preliminary research will be presented stating that a person’s depression may increase their odds of having heart disease or stroke.

“Cardiovascular diseases are impacted by and related to a variety of aspects of health and well-being including mental health,” study author Yosef M. Khan, M.D., Ph.D., M.P.H., and the national director of Health Informatics and Analytics for the American Heart Association in Dallas, said in a statement. “We found that the level of depression was strongly tied to living with heart disease and stroke, even after accounting for other factors that could impact risk, including the American Heart Association’s Life’s Simple 7 and variables of age, income, education, sex and race/ethnicity.”

And, research will presented in another session that shows an annual flu vaccination is an inexpensive, easy, and proven way to prevent illness and death in people with heart disease. Nearly 1 in 3 patients skip the flu shot, according to that preliminary research.

The vaccine rates are worse among the uninsured and those who lack regular medical care, according to a statement.

Researchers, historians, and students in North Texas may be happy to hear that the Portal to Texas History at the University of North Texas has reached a multimillion-dollar fundraising milestone. 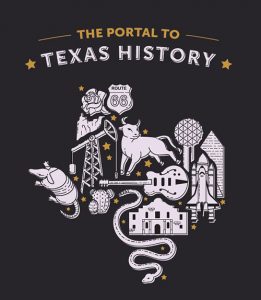 The funds support the continuing growth of its transformative online collection of Texas history and culture, according to a statement.

The portal gives access to a wide variety of resources from throughout the state, including the Texas Digital Newspaper Program, the Dallas Parks and Recreation Department Photograph collection, the Black Academy of Arts and Letter Records, and the Dallas Metroplex Chapter of the Names Project Foundation Collection. A large number of public libraries, including the Dallas Public Library, are among the portal’s 414 partners.

Over the past four years, UNT Libraries had a goal of raising $1.5 million to receive a $500,000 Challenge Grant from the National Endowment for the Humanities. UNT passed that goal earlier this semester by reaching $2.3 million in funds raised, according to a statement.

“The Portal is a free and public online gateway to primary source materials about Texas and thanks to the support from our donors and the National Endowment for the Humanities, we can ensure this resource will be accessible for generations to come,” Dean of Libraries Diane Bruxvoort said in a statement.

The money raised is expected to go into the Cathy Nelson Hartman Portal to Texas History Endowment, which supports:

The Portal includes more than 1.5 million historical materials from newspapers and photos to maps and letters, according to a statement. Every month, there are more than one million worldwide portal uses of the rare pieces of the state’s cultural and historical heritage collected from the portal’s partners at museums, libraries, and archives across the state.

Seven tenured and tenure-track professors have been hired this fall by The Erik Jonsson School of Engineering and Computer Science at the University of Texas at Dallas to continue building the school’s research programs in emerging areas, including additive manufacturing, artificial intelligence, and data science.

With the opening of the Engineering and Computer Science West building earlier this fall, mechanical engineering faculty members have new facilities for their research groups, according to a statement.

The St. Baldrick’s Foundation has awarded Cook Children’s Medical Center in Fort Worth as one of 25 infrastructure grants totaling nearly $1.5 million, according to a statement.

The one-year grants focus on giving the selected institutions the ability to open, coordinate, and treat more children on clinical trials, which often are their best hope for a cure.

“Clinical trials are a team effort on a massive scale. They require the expertise of researchers and clinical staff at hospitals, government experts and statisticians to analyze results, and of course, the children and families who actually choose to participate in them,” Kathleen Ruddy, St. Baldrick’s CEO, said in a statement.

St. Baldrick’s infrastructure grants are awarded based on the need of the institution and its patients, anticipated results of the grant, and local participation in St. Baldrick’s fundraising events and activities, according to a statement.