Back to the Future: A Look at the Tech Changing Business

Augmented reality, virtual reality, and artificial intelligence are the future of retail — and many other industries. Lurking in the background is blockchain, which has the power to disrupt everything in our daily lives. 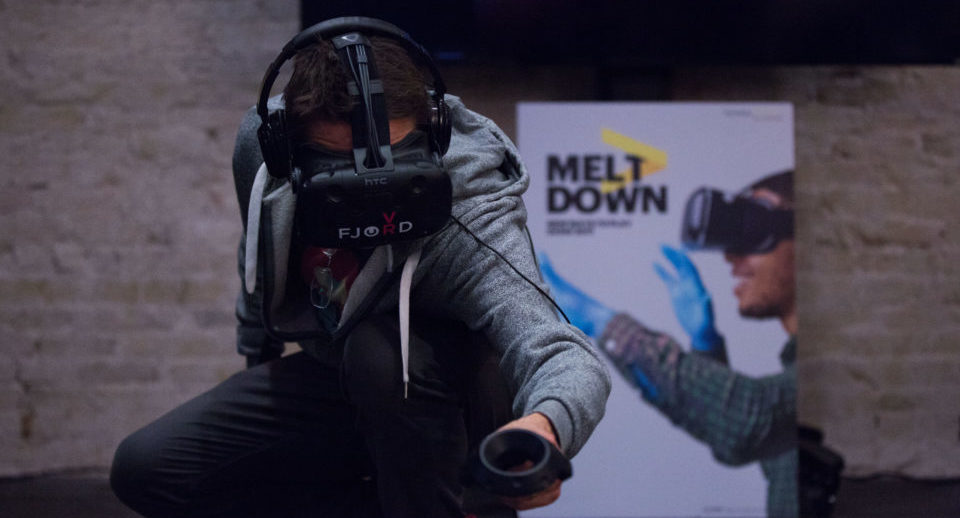 Accenture’s main North Texas office is in Irving, where it focuses on AR and VR experiences for retail clients. [Photo courtesy of Accenture]

There is no question that the future holds a place for augmented reality, virtual reality, artificial intelligence, and blockchain.

In a time when brick-and-mortar stores are struggling to stay afloat, companies are increasingly turning to AR, VR, and AI to alter retail commerce. The goal: to make shopping more interesting, more entertaining, more interactive — smarter.

“There’s no point in going out, other than to be out and have an experience while you’re buying something,” said Skip Howard, the CEO and founder of Spacee, an AR-focused startup based in the Addison TreeHouse. “That’s the only thing that separates brick and mortar stores from buying online.”

It’s a daunting task North Texas corporations — from small startups like Spacee to mega-companies like Accenture — are out to tackle.

“There’s no point in going out, other than to be out and have an experience while you’re buying something.”

“It’s all about using technology to help improve how you do business today,” said Emily O’Halloran, managing director and Southwest lead for Accenture Digital. “With advancements such as increased computer power, big data storage, open access, and open source making a lot of things openly available, AI is now more available than ever before.”

Meanwhile, Oaken Innovations wants to take blockchain beyond cryptocurrency and put it in the vehicles of tomorrow, doing microtransactions for rideshares, short-term insurance plans, rentals, and self-driving vehicles. The blockchain is still in its infancy — think of the internet in the early ’90s — and companies like Oaken Innovations are working to make it as ubiquitous as wireless networks are today.

“We get the technology that literally powers everything else,” said James Johnson, chief marketing officer and co-founder of Oaken Innovations. “That’s why I think it really complements Dallas and pays homage to engineers past.”

A seismic change in the way we do business is about to take root — and the disruption starts here.

When most people think of AR, they think of looking at the world through their mobile devices or special goggles to see the digital overlay.

Skip Howard throws all that convention out the window.  His team at Spacee is working on AR projections that are touch-sensitive without the need for goggles or mobile devices — or any special devices, for that matter. His latest invention turns any glass panel or shop window into a touchscreen.

“We make the whole thing interactive as if it were a standard touchscreen down to the pixel,” he said. “You can’t wear it out with too much use — it’s just glass.”

What’s more, “our touch glass can be used to attract customers outside the store,” he said.

It’s all powered by a holographic projector hidden away in the ceiling. In addition to this projection method, his team uses much of the same technology found in the Xbox Kinect to follow movements and gestures. That means he can essentially make any object into a touchscreen.

Customers could browse inventory, order a product, or even communicate with an avatar or holographic image of an artificial intelligence. Sensors not only react to touch, but also analyze a person’s demographics, possibly changing the content based on the person.

While his clients include several beverage companies and Wal-Mart, he sees huge potential for his touchscreen technology to be used in convenience stores, restaurants, and shops.

“Making the experience last is definitely something we do,” he said.

At Mercedes Benz of Plano, Spacee simulated a driving experience allowing drivers to sit inside a real car and steer it along various road courses. [Photo: Chase Mardis]

His latest challenge is finding a way to complete sales made through the technology quickly and easily without compromising the safety and security of the customer.

His team, which includes a handful of full- and part-time employees and contractors working around the globe, is looking at integrating with Apple Pay or QR code that links to a customer’s mobile device, or linking it to a hands-on, point-of-sale device to complete the transaction. He wants the process to be quick and seamless, as well as entertaining.

HOW BLOCKCHAIN COULD CHANGE TRANSPORTATION

The world is speeding to an autonomous vehicle future where many individuals shun owning their own car in favor of using self-driving, on-demand rideshare. Or, an owner could make their vehicle available for a short-term lease. An electric car could sell power back to the grid. Tolls are collected based on GPS location. Behind all these innovations lies the blockchain, a series of independent computers working anonymously to securely store data.

Dallas-based Oaken Innovations is working with Toyota and several other major automobile manufacturers on how to incorporate blockchain technology to securely store data, into the vehicles of the future.

“I would never make a bet against technology.”

“We become the platform with which people can hail rides and make payments, and our software parcels out that transaction,” James Johnson said. “I would never make a bet against technology. We love our cars, but I go back to the user experience of going to get gasoline, purchasing and maintaining a vehicle, having an insurance policy. I don’t see how a consumer will still do that in favor of pulling up an app and hailing a ride. It’s so much cheaper.”

Johnson had an epiphany about blockchain in 2014 when he realized how easily people could send cryptocurrency with very little transaction cost along with trust and security.

The blockchain makes it possible to do microtransactions that will revolutionize transportation. The rideshare of the future could disrupt its own creator, Uber, by allowing anyone to create a platform that’s secured through blockchain.

A self-driving vehicle could provide a customized experience where the passengers play an augmented reality video game during the ride. The blockchain also could maintain a vehicle’s history such as its repair and service records, accidents, and how it’s been driven, disrupting CARFAX.

“With blockchain, there are going to be huge leaps in user experience that we don’t have now.”

“It can give the entire history of the car’s trips, which is pertinent to a potential buyer, and have it in a private permission silo and allow people to look at it,” Johnson said.

The blockchain will transform the entire Internet of Things industry, such as smart thermostats, refrigerators, and other devices.

“Anyone trying to build on a traditional platform is either doing a market grab or wasting their time,” he said. “With blockchain, there are going to be huge leaps in user experience that we don’t have now.”

ACCENTURE GETS AHEAD OF THE GAME WITH AR, VR & AI

Accenture’s main North Texas office is in Irving, where it focuses on AR and VR experiences for retail clients. It also has opened a new Innovation Studio in downtown Dallas’ West End, where it demos all of its latest technology.

“The idea is to break down some of those barriers and feel and touch those things,” O’Halloran said. “It’s a great way to get ideas flowing.” 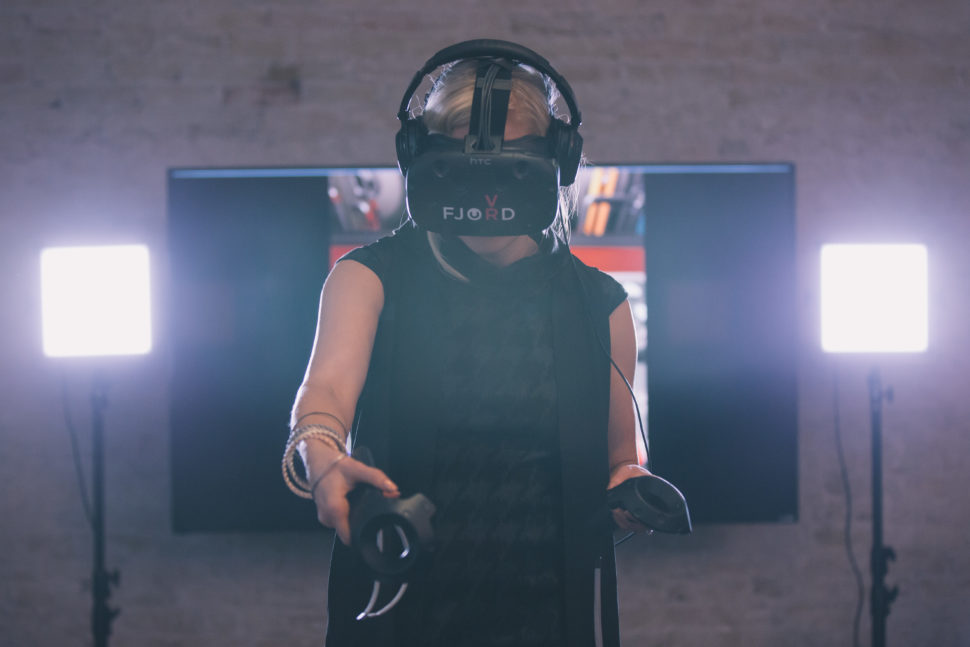 Accenture’s tech includes an employee training simulation where the user must prevent a nuclear power plant from having a meltdown.

“Companies are using VR to help train people very quickly,” O’Halloran said. “VR training is good wherever you have turnover or seasonality of talent.”

While VR goggles and the computers that run the software are cost prohibitive for consumers, O’Halloran believes the price will come down and the technology will go mainstream.

Accenture also is making headway in training and retail with AR. Unlike Spacee, Accenture’s AR requires goggles to generate the simulated reality, but the benefit is that they can be used anywhere, as opposed to only areas where a holographic projector is set up.

One Accenture demo projects LEGO instructions so the user can easily assemble a toy car. The same concept could be expanded to a factory, to assist workers putting together a complex machine or a consumer assembling furniture.

“Machine learning is being used to drive dynamic pricing so you can put the most optimal price in front of shoppers.”

And AI has become a large part of Accenture’s business, too, from setting prices to creating personal shoppers.

“Machine learning is being used to drive dynamic pricing so you can put the most optimal price in front of shoppers,” O’Halloran said. “Pricing can be complicated — with AI you bring in many factors to determine price, what competitors charge, factors in the environment, out of season, what’s weather doing, is this the type of customer who is price conscious?”

Personal shoppers could recommend products to a consumer after looking at what they buy and what they return.

“They take all that feedback that I gave them, and they’re able to make recommendations based on the colors I like to wear, or whatever I have in my wardrobe,” she said.

From Dallas to Plano, large corporations are using technology to change how they serve customers and outplay competition. From Blue Cross Blue Shield’s C1 Innovation Lab to AT&T’s Living Lab, here are a few Dallas-Fort Worth companies in the innovation trenches.

Invention: A Look Back at Historic Firsts With North Texas Ties

From liquid paper to the frozen margarita machine, delve into a list of inventors and inventions that have North Texas origins.

Breaking the Mold: North Texas Companies to Keep on Your Innovation Radar

More than a dozen companies operate innovation labs, test centers, or teams in North Texas — add these to your watch list.