The North Texas biotech boom just keeps booming—and a new "DFW Life Science Snapshot" from JLL shows why. From the Biotech+ Hub at Pegasus Park to a string of accelerators to local universities, DFW Airport, and more, here's a deep dive into what's behind the boom.

"We are showing up in the rankings and in the data," says Mike Rosa of the Dallas Regional Chamber. "It results in more opportunities and more looks for us." 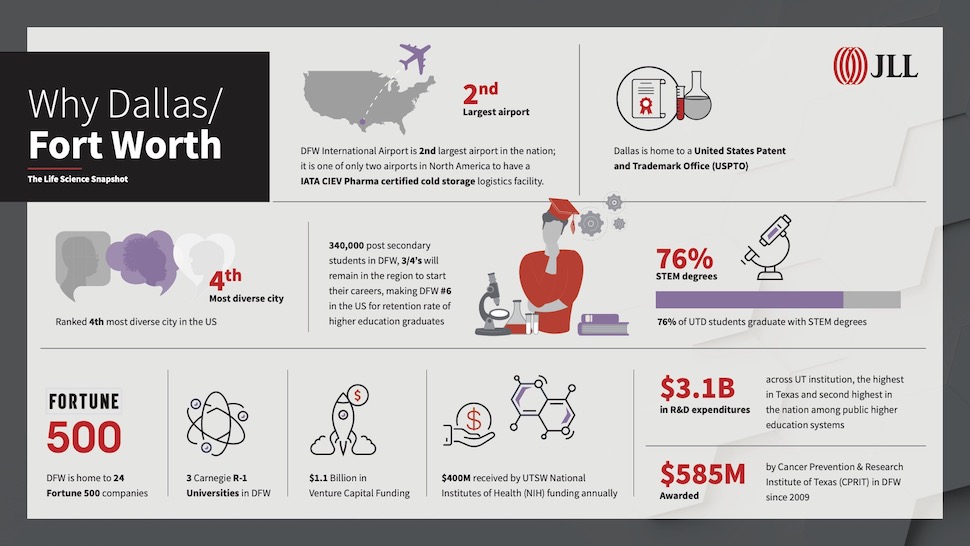 North Texas has built a reputation as a national leader in the biotech industry, putting the region on the cutting edge of research and innovation in this growing field. And a new “DFW Life Science Snapshot” from real estate services firm JLL helps explain why.

The snapshot—which you can peruse at full size here—is packed with factors that tell the story behind the local biotech boom.

And plenty of other voices back it up.

“We have more important companies here in biotech than ever before,” Mike Rosa, SVP of Economic Development at the Dallas Regional Chamber, wrote in a recent blog post. “This includes McKesson’s global headquarters, Taysha Gene Therapies, Caris Life Sciences, Verily, and Evolve Biologics.”

“We are showing up in the rankings and in the data,” Rosa adds, a point reflected in the JLL graphic at the top of this page. “It matters. Company leaders and location advisors pay attention when they start seeing cities and metro areas show up consistently. It results in more opportunities and more looks for us.”

One recent ranking proves his point. In July, Dallas-Fort Worth was ranked No. 16 among U.S. metros for having “the most favorable combination of factors for a successful life sciences ecosystem,” according to a study by CommercialCafe.

And just last month, D Magazine reported that “DFW Is in the Midst of a Biotech Boom,” citing “a steady supply of talented graduates and a business-friendly environment.”

JLL’s Life Science Snapshot shows that many factors have made North Texas a booming biotech hub:

Pegasus Park is a key driver of the boom

Among the newest players in the North Texas biotech scene is the Biotech+ Hub at Pegasus Park in the Dallas Design District. It’s a 23-acre future-focused campus that encourages collaboration, problem-solving, and innovation, particularly through its partnership with BioLabs, an international, membership-based network of shared lab and office space that helps launch biotech companies.

Pegasus Park says it has reserved almost 40,000 square feet of state-of-the-art, flexible lab, training, and office space to serve as the epicenter for regional life science innovation and to enable biotech trailblazers in their pursuit of the next big scientific breakthrough.

See inside BioLabs at Pegasus Park 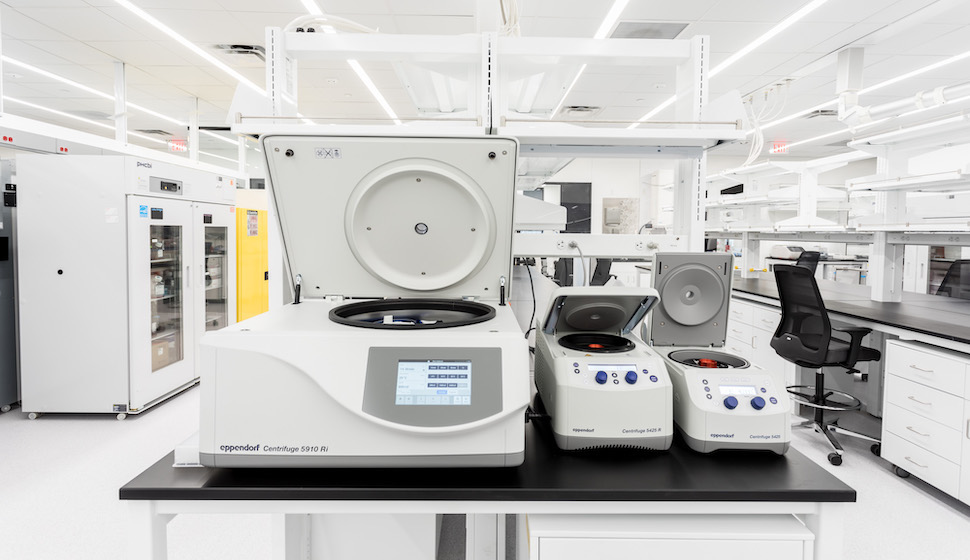 Pegasus Park’s partnership with BioLabs highlighted its role as an emerging biotech epicenter. BioLabs has successfully launched a network of Class A laboratory and office buildings with personalized, talent-driven services and cost-effective month-to-month leases for entrepreneurs in established and emerging biotech clusters. You can see inside the BioLabs coworking lab at Pegasus Park here.

A global accelerator will soon launch its first Dallas accelerator in partnership with the Biotech+ Hub at Pegasus with a focus on life science startups across the healthcare pipeline. Several other accelerators will also have a presence in the hub, including Blackstone Launchpad powered by Techstars, Health Wildcatters, and TechFW’s Thinklab.

Also, UT Southwestern’s Office for Technology Development will be located at Pegasus Park.

Biotech+ Hub says that it will welcome all sources of life sciences and healthcare innovation to prevent, detect, and treat diseases and promote health and well-being.

As a physical location, Biotech+ Hub at Pegasus Park has plenty to offer biotech startups:

The facility is one more reason why biotech leaders see Dallas-Fort Worth as well positioned to meet their needs.

In addition to the region’s relatively low cost of living, business-friendly environment, and rapid growth, the region’s educational institutions are supplying the talent that companies seek. Last year, for example, North Texas universities produced 1,935 bachelor’s degrees, 378 master’s degrees, and 108 doctorate degrees in biological and medical sciences, according to the Dallas Regional Chamber.

Dallas Fort Worth International Airport is the second in the country to be named a Center of Excellence for Independent Validators by the International Air Transport Association. That means the airport meets the standards for safe handling of pharmaceutical and life science products.

“When you’re flying a vial with maybe 4 or 5 ounces across the world from Mumbai to DFW, you need to know has it hasn’t been shaken too much,” Varela told D Magazine. “It could be worth $250,000.”

Fort Worth is growing its own biotech scene

To the west of Dallas, Fort Worth has utilized its infrastructure investments to help grow its own biotech scene, with accelerator TechFW taking the lead by partnering with the University of North Texas Health Science Center in Fort Worth and Texas A&M’s growing research and innovation presence in the city.

Fort Worth’s labor supply is bolstered by the Health Science Center and Texas Christian University’s School of Medicine. The city also has a growing funding presence with venture capital firm Cowtown Angels, which has supported the city’s startup biotech industry.