In a Time When Restaurants Have Taken a Hit, Here’s Why Revolving Kitchen’s Commercial Kitchen Rentals Thrive

Revolving Kitchen's ghost kitchens are equipped with the infrastructure necessary to develop a new concept or scale while driving costs down. Popular chains like Wingstop have taken notice—in a COVID-19 world, all you need is a kitchen.

Tyler Shin was born to a mother who ran restaurants in Seoul, Korea.

Growing up, he saw glimpses of the business. His mom came home overworked, and the day-to-day was often cumbersome and austere. It was an industry Shin swore he’d never get into. He moved to the states at the age of 12 and eventually got into corporate finance.

But when his mom passed, Shin decided to travel for around 18 months—and when he came back he decided to start a business, one that came full circle with his upbringing. Sort of.

Shin is the founder of Revolving Kitchen, a designated space for commercial kitchen rentals. Out of its 34,000-square-foot building in Garland, the business hosts 25 private commissary kitchens for short- or long-term rentals.

Think of it like a coworking space for cooking: The concept is often called a “ghost” or “cloud” kitchen for virtually anyone in the food business to thrive. The expansive warehouse facilities were gutted and built from scratch by Shin and his team, equipped with the infrastructure and equipment necessary to develop a new concept or scale while driving costs down.

“Most food businesses are driven by regulations, food safety, and public health concerns. You can’t just do it from home, it has to be in a commercially outfitted, inspected, and permitted space,” Shin told Dallas Innovates. “As any restaurateur or real estate moguls will tell you, that’s probably the most expensive and time-consuming part of the build out. So, for any individuals looking to start, expand, or relocate their business, it becomes an incredibly expensive proposition.”

Shin came up with the idea for Revolving Kitchen in 2018 while on the hunt for a commissary kitchen in North Texas to use for catering jobs. He was still working in corporate, but had become a silent partner in a local restaurant.

He did some research and found the region had an influx of food businesses, but not many commercial kitchens with loosely structured rental terms.

“I visited nearly every commissary kitchen/shared kitchen space in DFW and couldn’t find one that I like. Each one was either too small, too dirty, too old, too far, or too expensive,” he says. “I just knew that there was a pent up demand. I think Dallas is a food capital in terms of a number of restaurants and establishments per capita.”

The appeal, practicality, and rising popularity of ghost kitchens

This type of model has been on the rise in the U.S. in recent years, with reports predicting the sector to triple to $972 billion by 2026. 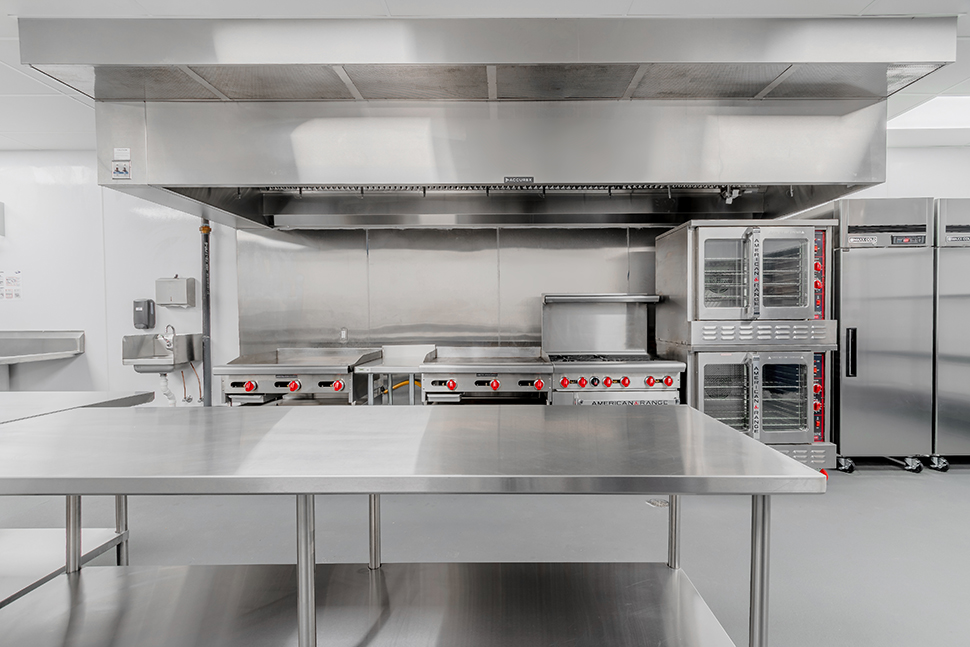 Users hail the low costs subsidized by the absence of a dine-in space. As Shin points out, building or leasing a restaurant space can lock business owners into a five- to ten-month lease plus utilities, labor, commercial permitting, and more. Not to mention the price of retrofitting a kitchen space that passes all health inspections.

It can become a time consuming and expensive process.

“You’re spending all this time, all this money, all this effort, to have the space open for food production. It may take six months, it may take as much as two years,” Shin says. “And you’re not making any money whatsoever until you open the door.”

Revolving Kitchen is what Shin describes as a turnkey solution. All members need to do is register with the City of Garland Health Department to conduct a food business.

They can then choose anywhere from a 250-square-foot to 700-square-foot kitchen. The private kitchens are available around the clock with new, high-grade equipment that has already been licensed, permitted, and inspected for use. There’s even elevated loading docks and conference rooms on-site. 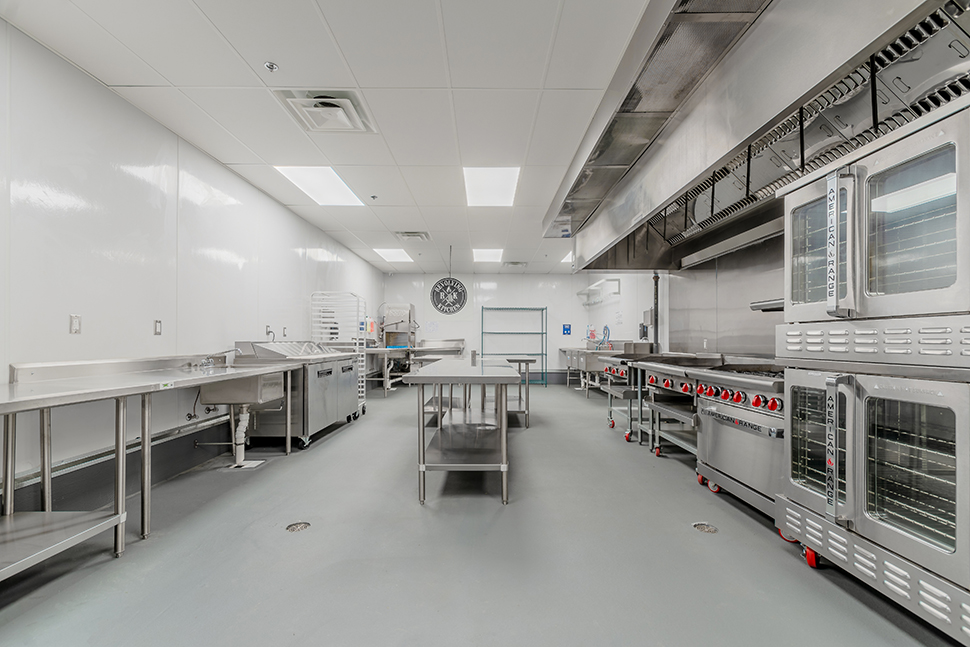 Tenancy is entirely up to Revolving Kitchen members. They can choose to rent a kitchen by the hour, structure a long-term lease, or book month-to-month. That’s especially important for businesses looking to scale.

“If your restaurant goes well, you can run out of space. If you want to expand, you have to go through the whole process over and over and again,” Shin says. “How long is it going to take for you to actually open 5-10 locations?”

Today, Revolving Kitchen has around 50 members who are using the space. Shin describes his customer base as a vast amount of different people doing different things.

Some are sole tenants (as in one company uses a kitchen full-time) while others rotate depending on their customized terms. There’s catering companies, meal prep companies, consumer packaged goods producers, farmers market vendors, and more.

Even locally based food chains have taken notice of the concept—Wingstop recently began using Revolving Kitchen for takeout and delivery via third party apps. 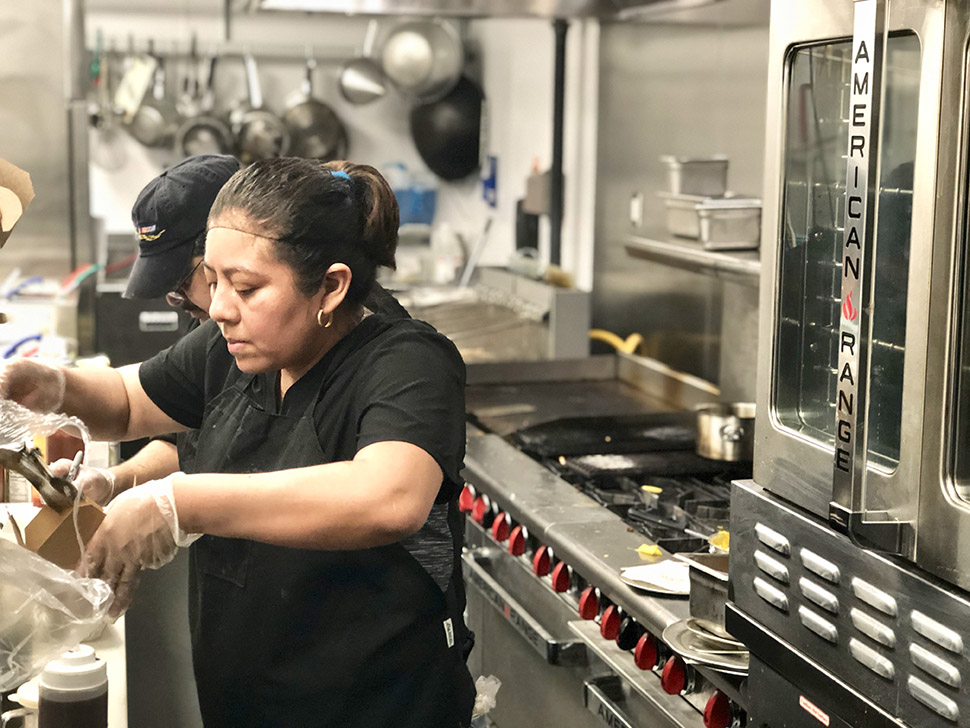 “People who are doing customer packaged goods, people who do catering, they don’t really need a retail space,” Shin says. “That’s where we come in.”

That mindset has become even more apparent with the onset of COVID-19.

When the pandemic hit, like most retailers and restaurant operators across the country, Revolving Kitchen took a beating.

The healthy mix of catering businesses and farmers market vendors using the space could no longer afford to, though Shin tried to accommodate everyone by lowering rental rates and providing more flexible terms.

But about four weeks into the pandemic, things took a turn.

“We started getting a lot of calls from people wanting to do strictly takeout, delivery, or meal prep operations,” Shin says. “Everyone realized that what all restaurants could do—or were already doing—was takeout and delivery or curbside pickups.”

Most of Revolving Kitchen’s new business has come from those struggling to keep up with brick and mortar operations. It’s entrepreneurs who don’t necessarily need a retail space—they just need a kitchen. 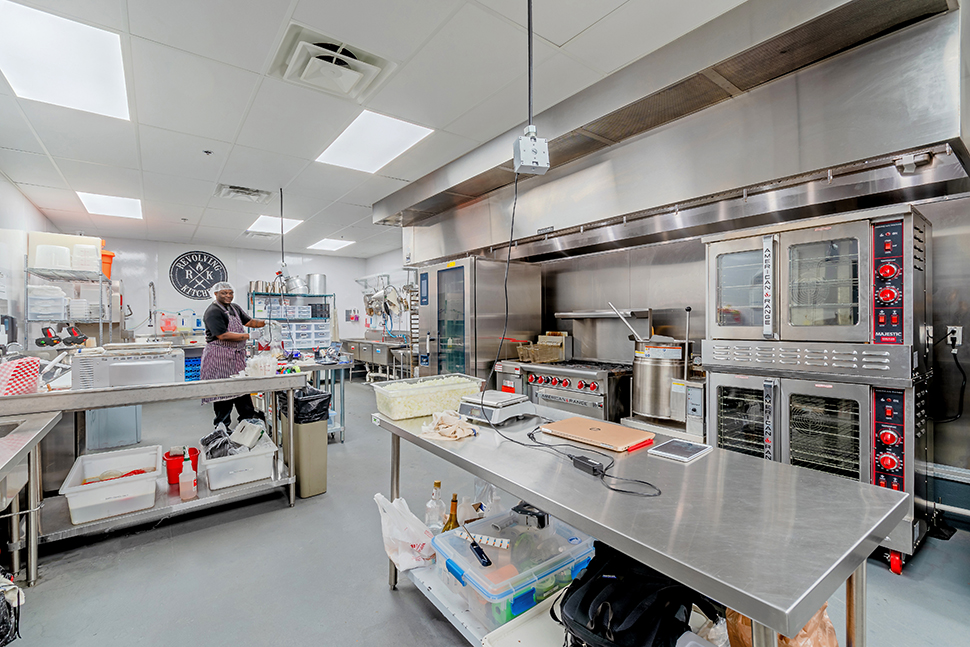 While restaurants, catering businesses, and food trucks have struggled, delivery services like DoorDash, Uber Eats, and Postmates are doing really well. The same goes for wholesale, transportation, and food processing.

The pandemic has brought a rise in what’s convenient and cost-effective. Despite looking into the unknown, Shin plans to ride the wave of changing tides.

“COVID-19 may alter our behavior in terms of where we work, how we work, where we eat, and how we eat,” he says. “But it’s not going to be like this forever. Maybe delivery and takeout will taper, despite exploding right now. But a lot of people should, right now, try to capitalize on this.”

What’s next for Revolving Kitchen

Choosing Garland was strategic from both a location and financial standpoint. As an infrastructure-intensive business, Shin had to completely build-out everything with his team before actually accommodating members.

He didn’t want to be in the middle of heavy foot traffic—as a food production and distribution facility, he just needed to be close enough to a major interstate and far enough from traffic. 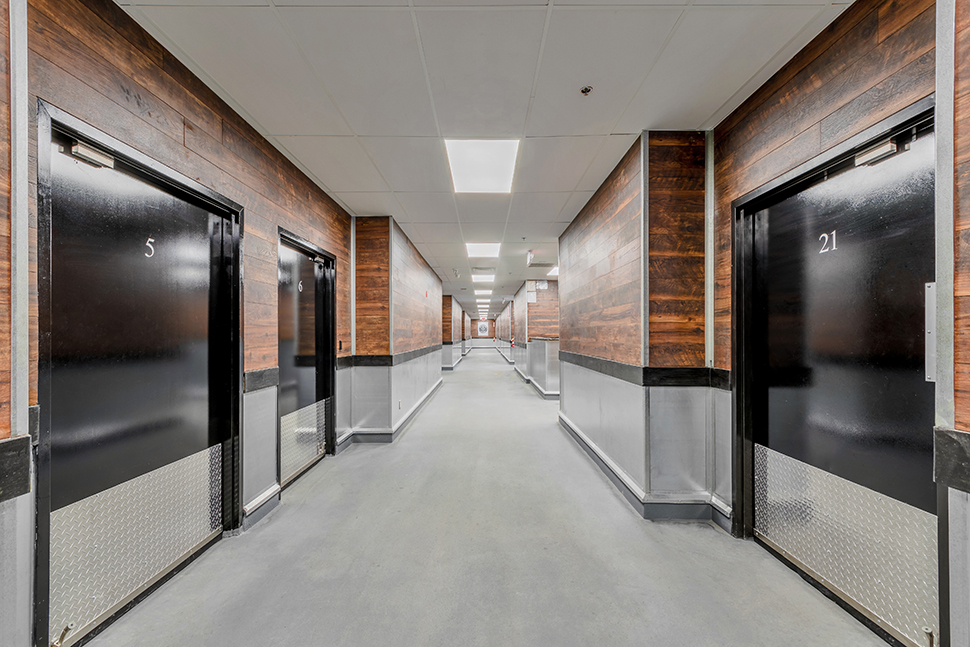 “Where we are is perfect in terms of serving people who are in Addison, North Dallas, some parts of Park Cities, Lake Highlands, Lakewood, Plano, and Richardson. We have access to a lot of different neighborhoods,” he says. “But I probably need four or five locations throughout DFW.”

Now, Shin is seriously looking into South Dallas for a second Revolving Kitchen location. With the large number of food deserts there, he’s considering adding a retail or grocery component.

Revolving Kitchen’s bread and butter is commercial kitchens for rental, but Shin and his team are hoping to tweak the current model depending on the location.

“Nobody’s perfected the model here. We’re basically a startup—nobody’s done this before, at least to this scale,” Shin says. “We want to grow, but I think first we have to prove our concept.”