Find Me In the Club(house): Here’s Why You Should be on Social Media’s Latest Phenomenon

"It's going down." The newest audio only app, Clubhouse, has taken social media by storm with its big-name visitors and exclusivity. Here's how you can get started, courtesy of some hot tips from PR maven Leah Frazier.

It’s not everyday that you can hit the club and work at the same time—but since November, I’ve been frequenting one of social media’s most buzzed about hotspots, Clubhouse, almost every day.

Without the formality or pressure of being on video, Clubhouse allows users to connect via voice, leverage one’s business expertise on stage or establish friendly banter, with absolutely no strings attached. This is accomplished through virtual “rooms” that hosts speakers and moderators who conduct an ongoing conversation (on various topics) on the virtual stage.

For the time being, Clubhouse is only available on iPhone (or on an iPad), however Founders Paul Davison and Rohan Seth have recently advised that Android access is coming soon. While in beta, the app has reached a valuation of over $1 billion, generated 10 million downloads as of February 2021, and continues to grow in impact as new features roll out weekly.

Gary Vee, who labeled the app as a “gamechanger,” admitted recently that if it weren’t for his back-to-back meetings, he’d be on Clubhouse all day delivering content and networking, because of the power of the platform.

So what’s the big deal?

I have personally witnessed the magnitude of Clubhouse by expanding my network globally. I’ve connected and appeared on stages with multi award-winning TV and film producers, NBA and NFL legends, top-tiered business coaches and consultants, and more.

Every time I co-host a room or appear on stage, my social media following increases by 50 to 200 new followers on both Clubhouse and Instagram. I’ve monetized the platform by directing audience members to my products or service offerings via the link in my Instagram bio (more on that in a bit), increased my private Facebook community numbers, generated leads for my high ticket service offerings, and collaborated on projects with like-minded professionals from all over the world.

Multi-billionaire Grant Cardone promoted the launch of his hit new show Undercover Billionaire primarily on Clubhouse, making it number one on Discovery TV. He thereafter raised $15 million on the app., in addition to other fundraising efforts coordinated during the Texas Freeze by rapper The Game, that raised over $5K in a couple of hours. Business coaches and consultants have generated six figures or more in one day and/or weeks, successfully building trust by virtue of their audio content and then navigating the audience offline to their products or services.

The list could go on forever about the magic of Clubhouse, but you really have to dive in and see for yourself. In the meantime, here’s a quick “get started” guide, and ways you can be intentional about your time on this rapidly growing platform.

One of the main areas of focus when you first get into the Club is to create your bio. This is the first thing people will see when determining whether they want to follow you and for busier rooms, whether or not you will be brought on stage to speak. The first several lines of the bio are most important, so make them count. My advice would be to include any awards, wins or accomplishments you’ve earned, followed by your elevator pitch.

Get creative by using emojis and dole out your contact info at the end (email address and website address). Currently there is no way to include direct URL links for contact off the platform, however, the founders have advised that the functionality is coming soon.

Upon entry into the club, you’ll have the chance to set your interests. Do you want to have rooms focused on entrepreneurship, dating, or entertainment? It’s completely up to you, but know that these will be the types of rooms pushed onto your feed.

My approach is a tad different: I set my interests for the topics I’m interested in speaking or listening to, and I also set them for rooms where I believe my target client will be. I’ve personally been in rooms where I was the only marketer or publicist on stage and it was like hitting the lottery. 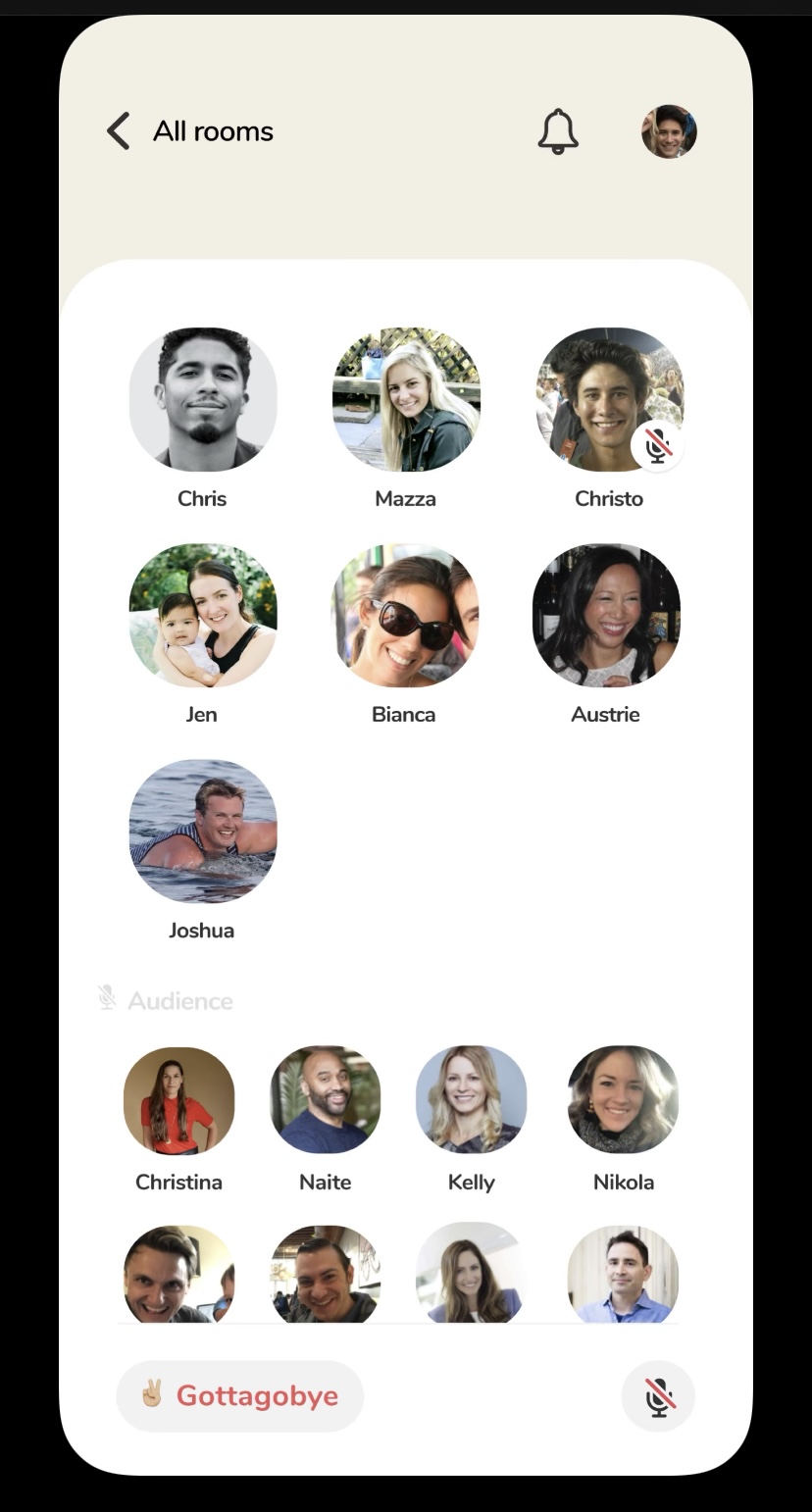 This isn’t about following your friends. Clubhouse is about strategy. If your friends have completely different interests than you, then don’t follow them. Let them know it’s nothing personal.

In addition to the interests you previously set, Clubhouse will show you the rooms that your friends are going in and out of, stages they are speaking on, and will also put similar rooms in your feed. Do yourself and the algorithm a favor and only follow the people you are truly interested in gaining value from and keep it at that.

I’ve received the most value from Clubhouse just from sitting in the audience and listening to the experts. Some of the speakers have been celebrities or business moguls that I have followed for years and now I’m virtually in the same space as them, hearing their knowledge and advice.

If I’m listening and I have something valuable to add—or it’s within the area of my expertise—I virtually raise my hand, get up on the stage, and speak to what I know. There have been times where the moderators or room hosts have kept me on stage, upgraded me to a moderator, or have directed the audience to engage with me off of the platform.

Depending on if the moderator or speakers on stage follow you, your profile will then be upgraded to what I’d like to call the VIP section, labeled the “Followed by Speakers” section. Here, you’ll appear above the section labeled “Others in the Room” and can stand out.

As speakers are presenting, and just as an active listener, people are most likely tapping on your profile pic and deciding whether to follow you by skimming your bio. (See Tip 1 on crafting that stellar bio.)

Just as a listener in the “VIP Section,” I’ve gained new followers to both Clubhouse and Instagram without even speaking or stepping onto the main stage.

Take ownership for the conversations you want to see on Clubhouse and host your own room. Don’t be discouraged if you only see one or two people come to your room your first time going live. Just like any other platform, keep at it and your audience will grow.

Pro tip: Collaborate with other Clubhouse users to co-moderate the room with you. As co-moderators, their audiences will receive notifications of the room and topic, in addition to your own followers. Obviously, the more followers you have and the more that your moderators have, the more potential for you to host a room with a larger audience.

As you navigate through the platform, there are options for you to join clubs solely narrowed down to certain topics or for you to start your own club. These operate like communities that you would see on Facebook or LinkedIn. Get as creative as you want when it’s your turn to host a room.

An organization did Clubhouse’s first ever musical, The Lion King, as an audio-only production with a full cast and choir last December. There have been TV show castings, auditions, and media-led exclusive Q&A’s with celebrities for upcoming film releases on the platform as well. It really is whatever you make it.

And no. I don’t foresee this taking the place of podcasting—it’s rather an enhancement, especially if you open a room and podcast at the same time. And no. This definitely doesn’t replace LinkedIn—it’s an enhancement to your realm of networking.

While Clubhouse has its cons (favoritism, male versus female power dynamics onstage, racial and social equity tensions onstage, etc.), I have seen more good than harm from this new-wave social media platform. Echoing the sentiments of my new Clubhouse friend turned platform influencer Samit Patel, “Clubhouse is a brand new platform and I think it is going to go places.”

So jump in while you can—it’s better late, than never.

Leah Frazier is a 2-Time Emmy Award-Winning, 10-Time AAF ADDY Award-Winning entrepreneur, best selling author and named one of the top 50 leaders in innovation for Dallas-Fort Worth. She was recently(...)