‘A Global Influencer of Technology and Innovation’: Richardson Opens HQ for Its Innovation Quarter

The 27,500-square-foot new HQ—in partnership with UT Dallas—anchors Richardson's 1,200-acre Innovation Quarter. A masterwork of vision planning years in the making, it's a catalyst to spark innovation and nuture collaborations—and attract hundreds of entrepreneurial businesses. 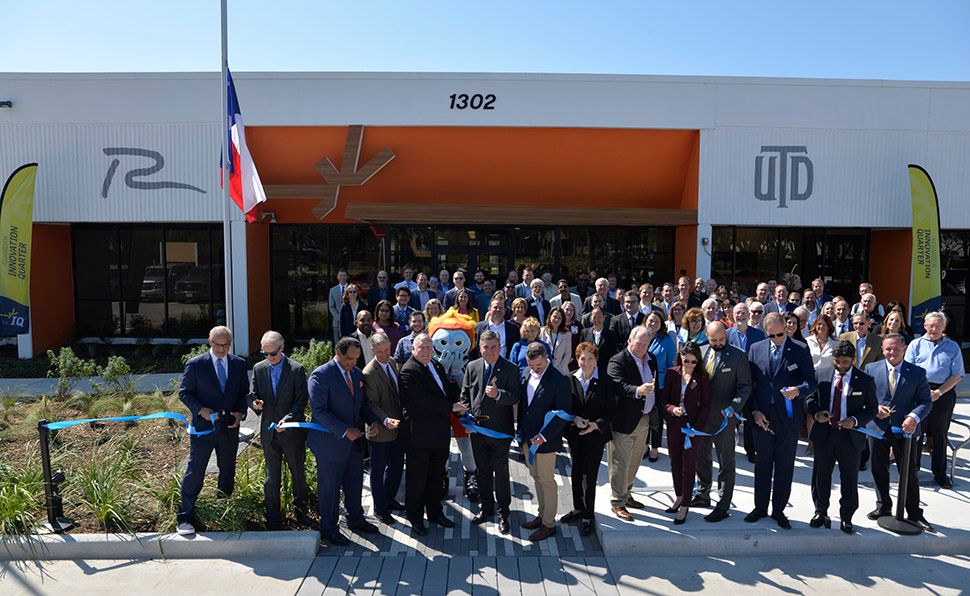 “Catalytic” was the watchword at the grand opening of Richardson’s Innovation Quarter headquarters on Wednesday, capping off years of planning and work. The HQ is now the keystone to a district aimed at leveraging the city’s telecom past to become a hub for new technologies.

The new 27,500 square-foot space, leased in partnership with UT Dallas, anchors the 1,200-acre Innovation Quarter, which is aimed at bringing together players from tech startups to established international firms, university researchers, and public stakeholders to make the city a global player in the ecosystem.

Richardson, which was designated by the Texas Legislature as the International Business Capital of Texas in 2011, already has 65 major international companies and hundreds of other global firms, Voelker said. From a catalytic standpoint, the IQ is not only about increasing the city’s global market share and number of entrepreneurial businesses, but also fostering more clusters of industries, he says.

Situated between Campbell Road to the north and Apollo Road to the south along a stretch of land known as the Telecom Corridor, the Innovation Quarter is already the site of operations for numerous global companies like Ericsson and Siemens, in addition to others like id Software and Zyvex.

“The collaboration that we’re going to be able to have truly is a global marketplace,” said Voelker. “And in my experience, the international community tends to be some of the most entrepreneurial types of individuals that you can ever run across,”

After rezoning much of the area for uses that would make buildings there more attractive and flexible to emerging companies, the city used the event’s ribbon cutting to mark the ceremonial opening of the IQ—which businesses will be able to use as a testbed for new tech and ideas. For example, the city hopes to leverage the existing telecom infrastructure to aid in the use of autonomous people movers along Glenville Drive, which makes up the “backbone” of the IQ.

Voelker said the IQ can provide a place for building a business or commercializing the research coming from UT Dallas and other institutions in North Texas. The IQ aims to attract hundreds of small companies and startups that could eventually turn into unicorns or go public, rather than focusing on incentivizing one or two big-name companies to set up shop in the city.

“As we went out and recruited a diverse set of key industries to be part of the Richardson area, the common denominator was our innovation around communications and computation,” Voelker said. “When these companies looked at the heat map of resources that were available, and that will be available because of UT Dallas, this is a logical place for them to land.”

Inside the IQ HQ, the city of Richardson plans to house its Office of Economic Development and its Office of Strategic Initiatives, along with space for events and programming.

“Some remember the early days after the telecom bust, when many of us got together and said, ‘What are we going to do now?’” Voelker said. “We took a punch to the gut. This building, this day, we’re back.”

UT Dallas will play a leading role in bringing talent and companies to Richardson, as it has helped to do since UTD was initially formed as a research arm for Texas Instruments.

“Our proximity to the technology corner of North Texas is one of our greatest advantages,” UT Dallas president Richard Benson said at the event.

In addition to attracting talent and emerging startups to the area, the university will take up a large portion of the space at the IQ HQ. Along with coworking, office, and lab space, the university is launching five new research centers—which will be rotated, as demand from researchers in the space is high—under the umbrella of the Centers for Emergent Novel Technology at the Innovation Quarter.

“How will we know what that we are successful in our work here at the Richardson IQ?” UTD President Benson asked at the event. “It will look something like this: Industry will engage with top researchers from UTD, entrepreneurs will launch startups with our support, and the public will experience academic and skill-building education from one of the nation’s top-ranked research universities.”

Benson says the university will have six applied research centers at the IQ. Each was chosen for its emerging novel technology through a competitive process led by the university’s Office of Research and Innovation  Dr. Joe Pancrazio.

“What that means for our region is that high-growth small and mid-size firms—whether in the fields of aerospace, defense, biotechnology, financial services, or next generation communications—can look to the IQ as a resource,” Benson said.”Collaborations like those that will be nurtured here are the lifeblood of innovation.”

Benson believes that together, we can solve some of our greatest challenges and is “proud to bring our best and brightest” students from UTD to engae with the Richardson IQ.

He also welcomes members of the community throughout North Texas to attend the IQ’s open events, as well as mentor or volunteer.

“This forward-thinking initiative will allow us to collectively attract new businesses to the area and collaborate to ensure UT Dallas and the resulting community can learn and implement the knowledge they gain, while contributing to the economic growth of the city and beyond,” Jamison, said at the event.

“While some communities are on first base, we find an extraordinary pace in a special place—the city of Richardson—in an exceptional space to provide dominant visionary leadership in this research, innovation, and technology race,” Jamison added.