Olympian and entrepreneur Allyson Felix says that speed is of the essence when it comes to advancing opportunities for girls and women. With a theme of "Transforming Texas," the TXWF event also featured Dallas Mavericks President and CEO Cynt Marshall, the award-winning Garland High School step team, and a live-streaming room next door where 200 local students took it all in.

The Texas Women’s Foundation believes that when you invest in a woman, there’s a “ripple effect” that benefits her family, her community, and her world. That belief was on vivid display earlier this month at the Hilton Anatole Hotel in Dallas, when the foundation held its 37th annual luncheon. And by featuring Olympic track and field legend Allyson Felix as a key voice, the TXWF showed speed is of the essence when it comes to advancing opportunities for women.

The Texas Women’s Foundation—formerly Dallas Women’s Foundation—has delivered grants totaling $32 million since its launch in 1985. This year’s event, held October 6, had a theme of “Transforming Texas” and served as the TWF’s principal fundraiser, supporting its research, advocacy, programs, and grantmaking to help Texas women and girls thrive.

Olympian Allyson Felix was featured at this year’s event

This year’s event featured Felix, the most decorated American track and field Olympian of all time. She made waves in 2019 by standing up to Nike for its maternity policies for sponsored athletes, then striking out on her own as a competitor by co-founding Saysh, an L.A.-based, women’s footwear and lifestyle brand. She told Inc. Magazine recently that making those moves was terrifying, but ultimately rewarding.

“It’s important for women to see that there is freedom on the other side of fear,” Felix told Inc. I was terrified to speak out. I wasn’t sure how it would be received. But I started to realize I have a voice—even if it shakes, I can still use it. We could all do this—just strive to live bravely.”

At the luncheon, Felix talked with Dallas Mavericks president and CEO Cynt Marshall about her work as an advocate for maternity rights, access to education, and support for mothers who are athletes. (The Mavericks served as the presenting luncheon sponsor.)

Felix told Marshall she decided to try track after starting out as a basketball player. “This is my thing that makes me feel alive,” she discovered. “I found out I like to win.”

Felix said she parted ways with Nike when they asked her to take a 70% pay cut after she became pregnant. Without a footwear sponsor, she talked with her brother Wes about starting someone on their own. Her brother said, “What if we did this ourselves? Here is an opportunity to create Saysh—shoes designed for and by women.”

The Olympian started competing again when her daughter was eight months old, and saw how her colleagues also struggled with childcare. That led to one of her ongoing advocacy efforts. “We offered free childcare at our national championship,” she said.

Felix lauded Marshall for her achievements (the Mavericks leader recently wrote a memoir, “You’ve Been Chosen: Thriving Through the Unexpected,” which was given to each attendee at the event).

“[My inspiration] comes from women like you,” Felix told Marshall. “You’ve really set the tone. It’s seeing strong women in roles of leadership.” 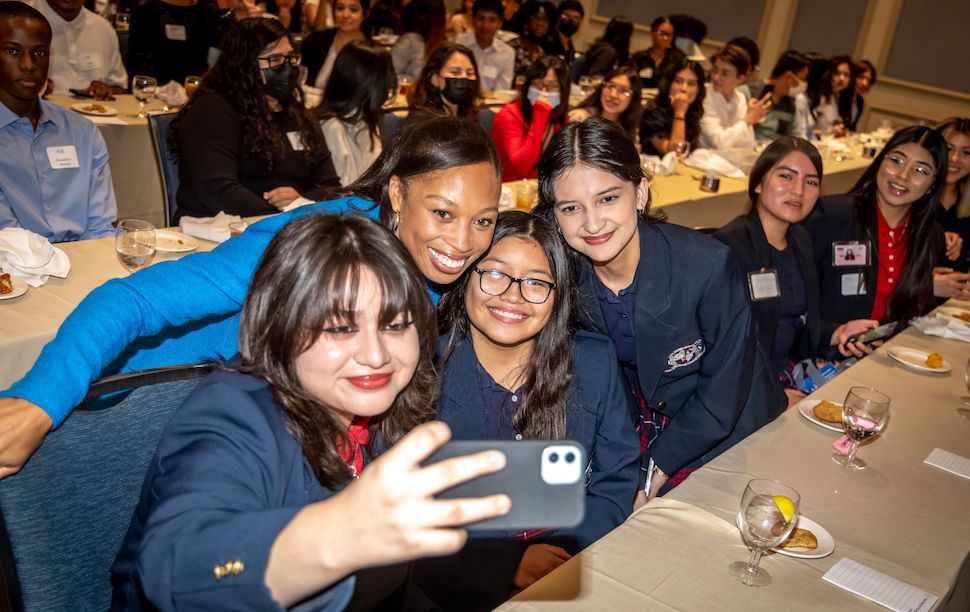 Allyson Felix taking selfies with some of the 200 teens in the livestream room at the Texas Women’s Foundation luncheon. [Photo: TXWF]

Turning their attention beyond the luncheon crowd to the 200 students viewing the action next door via livestream, Felix and Marshall gave them advice.

“We think we have to have a massive platform, but you don’t,” Felix told them. “Start where you’re at. Know your worth and know your value.”

The discussion was quickly followed by a video featuring TXWF President and CEO Miki Woodard.

Woodard then invited the event’s two co-chairs back to the stage: Rachel Vinson, president of debt & structured finance U.S. at CBRE, and Laura Nieto, Southwest Airlines’ director of community outreach.

As seen in the photo at the top of this article, Vinson and Nieto had pulled on running shoes to reflect TXWF’s high-energy, fast-paced mission to advance change.

“We can’t continue to stay where we are,” the co-chairs told the crowd and students in the next room. “We have to sprint towards a better Texas for all. Let’s cross this finish line together.”

More images from the TXWF luncheon 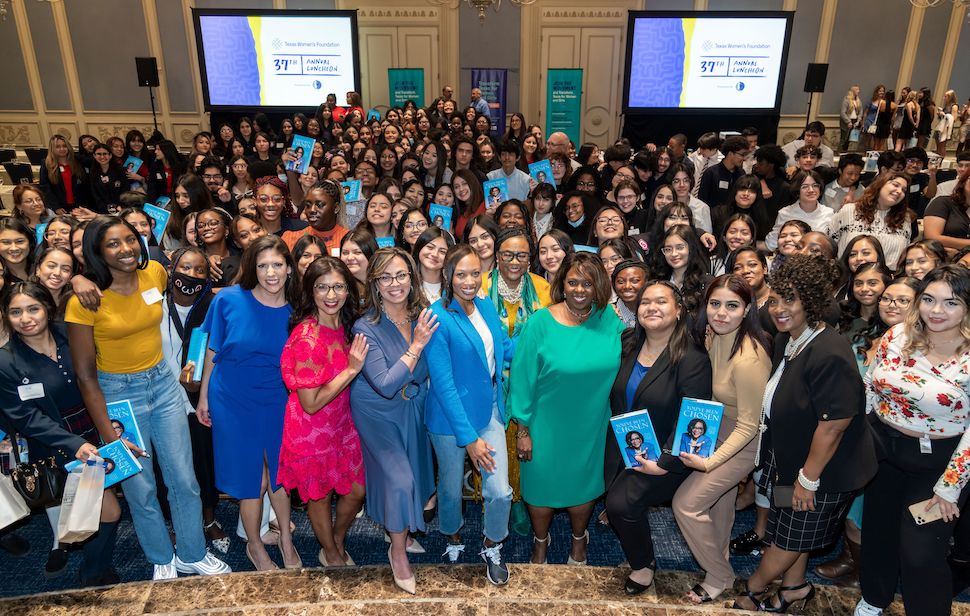 The “ripple effect” in action at the 2022 Texas Women’s Foundation luncheon. [Photo: TXWEF] 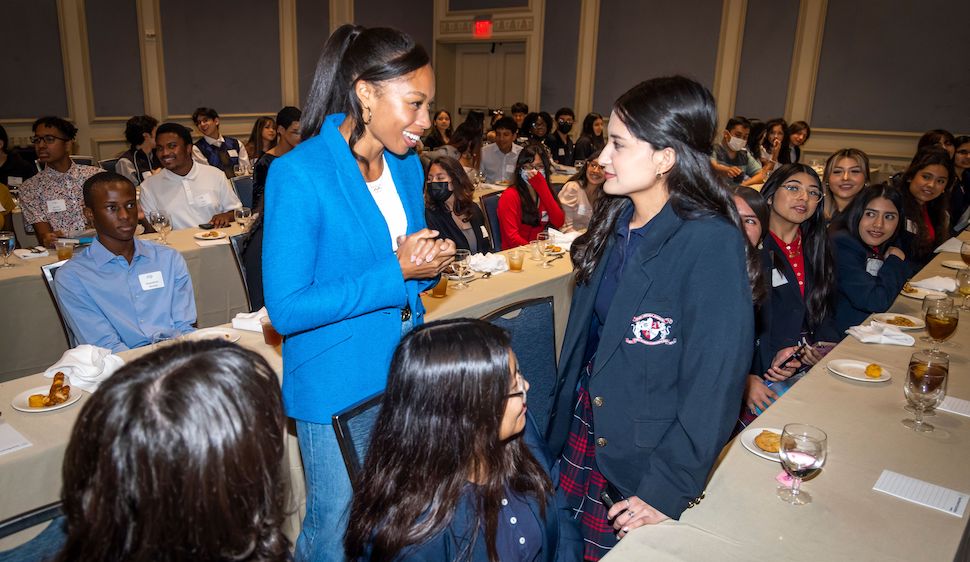 Allyson Felix talks with a student in the TXWF livestreaming room. [Photo: TXWF] 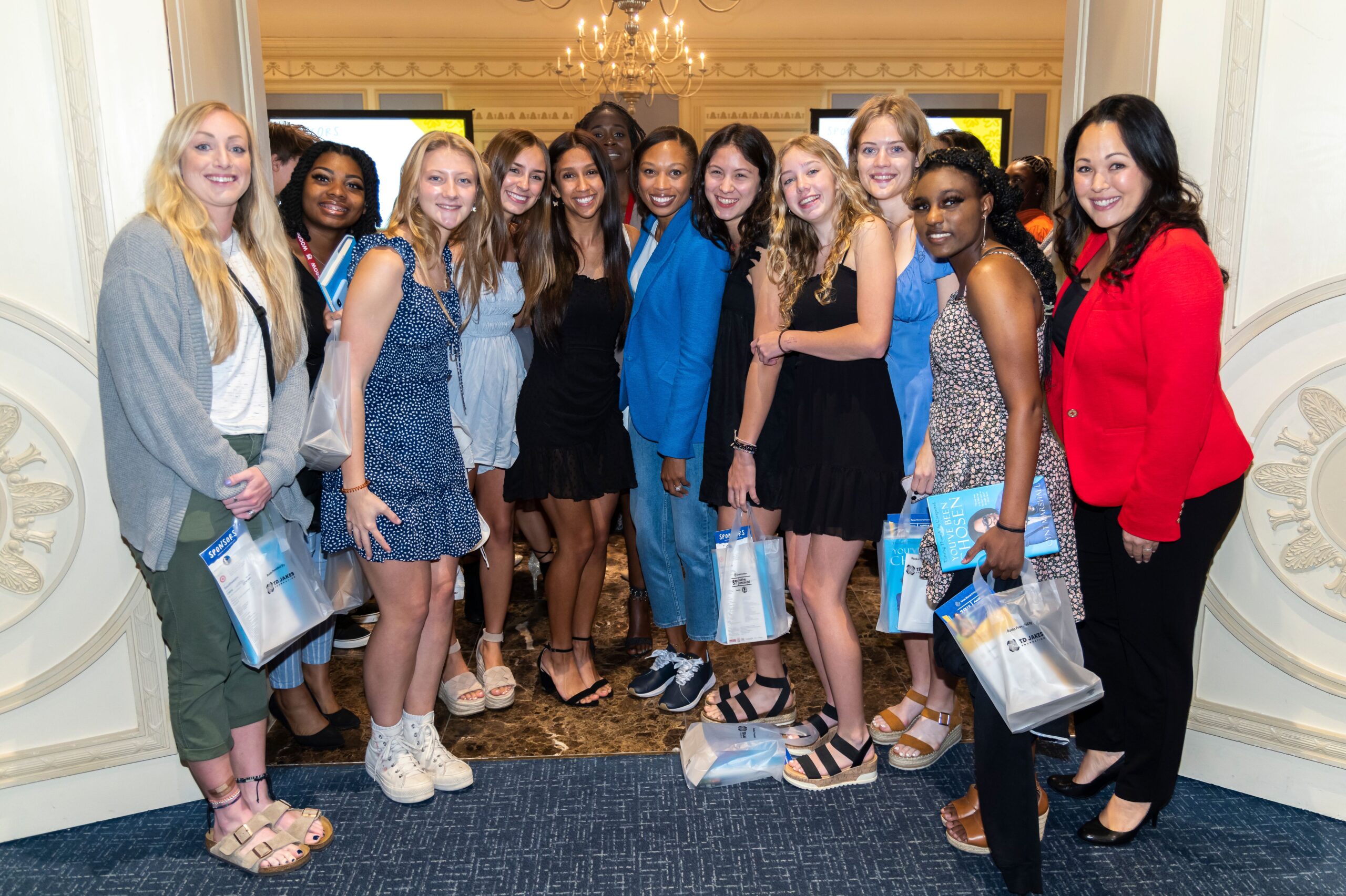