The Centanni Lab at TCU has received a $10,000 grant from the GRAMMY Museum for a study exploring connections between musical instruction and brain improvements that might help with dyslexia.

"We've found in the last few years that there may be some overlap here—a really interesting way of using our knowledge about musical training to learn some more about what's happening in the brain in individuals that have dyslexia," Dr. Tracy Centanni told Dallas Innovates.

A TCU lab in Fort Worth just won a GRAMMY. Not an award, but a grant—one that could help the lab explore connections between musical training and brain improvements that might help with dyslexia.

This week the GRAMMY Museum awarded $200,000 in grants to 16 recipients in the U.S. to help facilitate research as well as support archiving and preservation programs. The museum awarded $10,000 to the Centanni Lab at TCU, which focuses on studying auditory perception with a focus on language, genetic influences in communication disorders, and neural plasticity during intervention. The grant adds to $310,000 in federal funding the lab has previously received, along with $8,500 awarded by an organization in the United Arab Emirates.

Tracy Centanni, Ph.D., the TCU assistant professor who heads up the lab, laughed when congratulated for being a “GRAMMY winner.” (She learned about the award in an email, not with a statuette handed out on stage.)

But she’s very serious about the underlying study and where it might lead.

“We’re interested in understanding all of the different biological and environmental factors that impact reading acquisition, and what’s happening in the brain during that process,” Centanni told Dallas Innovates.

“How does the brain perceive different elements of music? And how does musical training increase or decrease these various brain responses?” Centanni said. “We’ve found in the last few years that there may be some overlap here—a really interesting way of using our knowledge about musical training to learn some more about what’s happening in the brain in individuals that have dyslexia.” 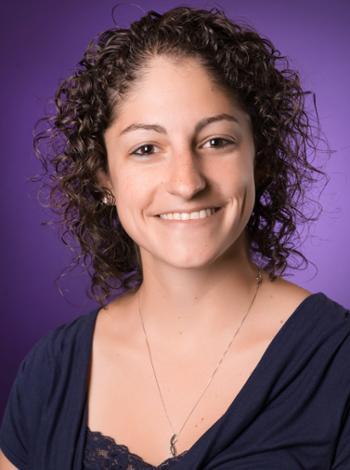 The Centanni Lab uses a 256-channel EEG system (seen in the photo above) to measure the electrical signals a brain generates when a subject performs a task.

“Our brains are making predictions all the time about what’s going to happen next,” Dr. Centanni explained. “If you think about it in terms of language or reading, this is information that is coming at the brain very quickly. So the brain tries to take a shortcut and make ‘predictions’ about what it thinks is going to happen next, to kind of speed up processing time.”

People with dyslexia may have deficits in that ability, Centanni says.

“So in terms of the musical tasks, we’ve shown that if you have music training, it can improve your brain’s ability to make predictions, at least in the musical sense. And so if we find the same in individuals with dyslexia that have had lots of musical training, it could provide support for more musical-type interventions in the future.”

The 256 sensors in the EEG “net” above allow Centanni’s team to measure brain signals with “millisecond precision.”

“The idea is to determine whether musical experience in the form of formal training, does that improve the brain’s ability to make predictions about what’s going to happen next?” Centanni said.

“For this particular project, we’ll be interested in the brain’s responses to individual notes within a melody. The ability to say—millisecond to millisecond—what’s happening in the brain’s response will allow us to compare what’s happening when the person is listening to individual notes, rather than have the average activity over a longer span, which is what you get in other techniques like fMRI.”

Those milliseconds can make all the difference for someone having difficulties with speech or reading comprehension. If their brains can improve their ability to predict what succeeding letters or sounds might be, it’s possible the individual can improve their speech and reading, as well. But that research and potential outcome is still down the road. For now, Centanni’s lab is exploring the basic science behind it all.

Stimulating the vagus nerve for a ‘memory’ response 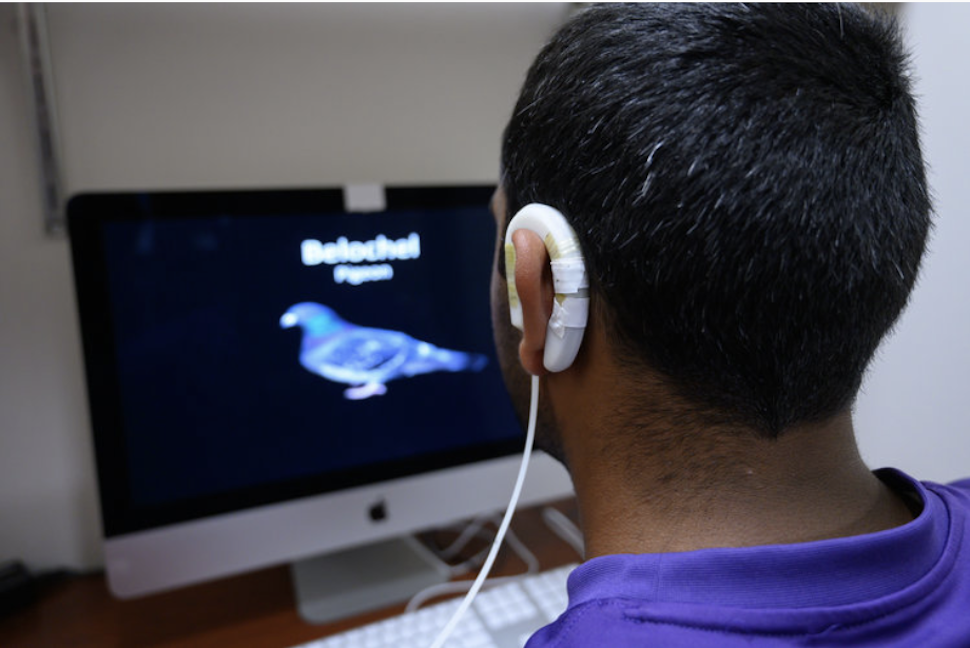 Centanni’s lab is also exploring how non-invasive stimulation of the vagus nerve can improve reading ability. The vagus nerve is best known for its role in the fight-or-flight response, like when a cheetah suddenly attacks a zebra. The vagus nerve controls physiological responses to danger—faster heartbeat, more rapid breathing, etc.

“What it also does is creates a lifelong emotional memory about that experience,” Centanni said.

By using a vagus nerve-stimulating device like the “surface electrode” earpiece in the photo above, the Centanni Lab is trying to harness this memory-making ability to create memories for things that are not life-threatening—like learning to read or master a new language.

“If you wanted to, for example, improve motor function after a stroke, can we stimulate the vagus nerve and help improve some of those brain connections? It’s actually an approach that’s already been approved that came out of my my doctoral lab’s work,” Centanni said.

“We have a paper on reading comprehension that is currently under revision, so hopefully that’ll be out soon,” she added. “And then we have a project on language acquisition that we’re wrapping up data collection on this fall.”

Another project Centanni is known for is her “Code Breakers” study, which was published in the journal Brain Stimulation in 2020.

“That project was actually our first vagus nerve stimulation study in the lab here at TCU,” she said.

Young adults and college students came into the lab for five different training sessions, learning how to read letters in Hebrew they hadn’t been exposed to before.

“We tested them on three different measures of varying levels of complexity to see, ‘Are you just learning the shapes, or are you actually learning to read using these letters? Are you creating an automatic relationship between the letter and the sound that goes with that letter?'”

“We were actually very surprised to see benefits in these more difficult tasks,” Centanni told us. “So stimulation did seem to help individuals automatically pull out a letter or a sound when prompted with a letter. And they were actually better at decoding novel words created with those letters.”

In the next year, Centanni hopes to begin a follow-up study using a very similar protocol, expanded into individuals with dyslexia and also adding EEG scans. By tracking what’s actually happening in the brain during the process, she hopes to learn which parts of the brain are being strengthened by the use of this stimulation.

Lab is also known as the GAPP Lab

The Centanni Lab is also known as the GAPP Lab, for Genetics of Auditory Perception and Plasticity.

The lab uses a variety of models to study the biological mechanisms of communication impairments. To explore the genetic heterogeneity of language and reading, the lab uses rats as a model to investigate the link between certain genes and auditory perception and plasticity.

The lab then brings in human participants to test these results, and evaluates new methods of driving plasticity during language and reading interventions.

The goal: to “bridge the GAPP” between the basic science involved and the diagnosis and improvement of language and reading in humans.

Dyslexia study on children subjects to be published soon

Among other Centanni Lab projects is a R.E.A.D. study on the Remote Evaluation of Audio-visual skills in Dyslexia. Conducted remotely during the pandemic, the study investigated auditory and visual processing in children with dyslexia between 7 and 12 years old. Optional saliva sample submissions were solicited to help the lab track down genetic correlates of reading skills.

“We’re about to submit the first paper from that project, looking at rhythm perception in young children with and without dyslexia,” Centanni said.