In Dallas County, Literacy Instruction for Texas estimates more than one million or one-third of the county’s population in 2030 will be illiterate.

A new game being created by Southern Methodist University puts users in the shoes of an archaeologist traveling the world to decode artifacts.

While Codex’s lead character works to translate ancient languages, for developers there is one core mission in mind: improving adult literacy.

“Nobody knows this language, so everyone is on equal playing field, and there is nothing to be self-conscious about when you play this game,” said Corey Clark, a software development lecturer who leads research efforts at SMU Guildhall.

Clark and Diane Gifford, a clinical assistant professor at SMU’s Simmons School of Education and Human Development, gave a preview of their app during a private event recently at Samuel Lynne Galleries.

“We need a radical new approach to adult literacy learning.”

As an entry into the Barbara Bush Foundation Adult Literacy XPRIZE competition, the game is focused on boosting reading and writing skills for adults.

A report released in 2015 by the U.S. Department of Education found that 36 million U.S. adults have low literacy skills.

In Dallas County, Literacy Instruction for Texas estimates more than one million or one-third of the county’s population in 2030 will be illiterate.

“We need a radical new approach to adult literacy learning. A solution that is relevant, scalable, and accessible — anytime, anywhere,” says the Bush Foundation on its XPRIZE competition web page. 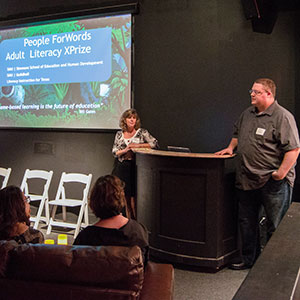 TEAMING UP TO TACKLE ILLITERACY

LIFT President and CEO Lisa Hembry approached SMU about teaming up for the competition last year. Regardless of its outcome, she realized an app could help her nonprofit reach more than the 5,000 it currently serves in the area.

“There are just lots of barriers to participating in a class twice a week. … so this solution would help so many people and it would be a tremendous supplement for those that are already working so hard to have a better life,” Hembry said.

There are 85 teams around the world working on literacy education apps for the multi-year XPRIZE competition, which will dole out $7 million in awards.

A panel of judges will narrow down the field to 15 semifinalists next spring. The $3 million grand prize will be reserved for the team whose app demonstrates the greatest literacy gains during a yearlong field test with low-literate adults.

Clark told attendees at the preview event that games offer a unique medium for learning.

“One of the great things about games is it’s actually one of the few things where you are expected to fail,” Clark said.

“And that’s what people want to do. They want to try something over and over. So, it’s an amazing thing to be able to have a student fail and still want to keep going.”

“One of the great things about games is it’s actually one of the few things where you are expected to fail,”

The game lays a solid foundation for literacy by beginning with activities focused on letters and sounds, Gifford said. Next, it weaves in words using the consonant-vowel-consonant format as well as sight words.

“We are shuffling in five, maybe 10 per a step so that they are really getting a grasp of these sight words, and then, [they] have early access to sentence reading,” Gifford said.

Before developing the game, the team held a focus group with LIFT students to understand what adults might be looking for in a literacy education app.

“There was a sense that because of their illiteracy, they weren’t able to learn and experience things outside of Dallas, where they were,” Clark said.

In addition to real-world learning, the students also expressed that current literacy game options were kid-focused and their need to feel a sense of accomplishment.

Clark said they worked to address the participants’ input into the game. As the player progresses through the story, they can unlock information and images about the real-life locations around the world they’ve visited in the game.

There are also mini games within that tackle everyday situations requiring literacy skills such as reading a map, filling out a shipping label, or handling money at a market.

TAKING IT TO THE NEXT LEVEL

In its alpha phase, the team is currently testing its functionality with LIFT students, Clark said.

“In January, our goal is to do a soft launch and at that point start collecting metrics on usage and actually have people play and then testing to see if we are increasing the literacy rate through the application itself,” he said.

Teams must turn in a final version for the competition in March.

So far, the Simmons School has invested $250,000 into the game’s development, but further funding could open up opportunities to enhance the app such as securing a better voice recognition software, Clark said.

He also sees possibilities to apply the game in other subjects such as Science, Technology, Engineering, and Mathematics education.

“It also becomes something we can push beyond literacy,” Clark said. “Once we have this stabilized, the game is made in a way that we can actually branch out into other areas.”

Education
Why Are There 750,000 Unfilled Job Openings in Cybersecurity? UNT Researchers Are Getting Up to $750K to Find Out

Related Articles
Why Are There 750,000 Unfilled Job Openings in Cybersecurity? UNT Researchers Are Getting Up to $750K to Find Out Is College Worth It? Emerging Research Focused on ROI Offers a ‘Resounding Yes,’ Economic Analyst Says The Last Word: UTD’s Balakrishnan Prabhakaran on Virtual Reality Tech for Phantom Limb Pain SMU Breaks Ground on $100M End Zone Complex at Gerald J. Ford Stadium Calendar: Not-to-Miss Events for Innovators in Dallas-Fort Worth
MORE►