See How the Dallas International District Is Taking Shape, from a ‘People Mover’ to a 20-Acre Park to Smart Cities Tech and More

From demolished mall to global destination, a plan 10 years in the making aims to turn the Valley View-Galleria area into an international center for businesses of all sizes. Here's a new look at what it could offer—and how it could spur dynamic growth in Dallas for decades to come. 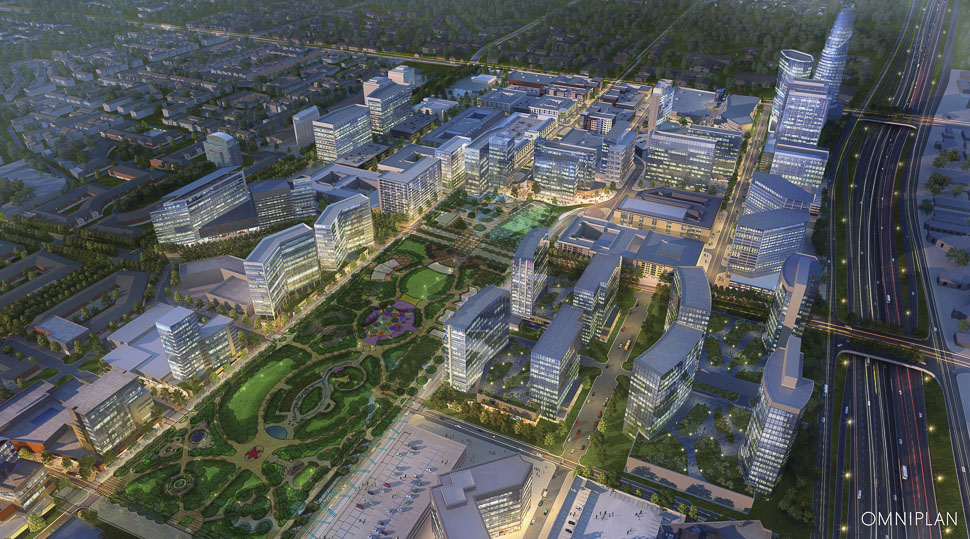 The aerial rendering above shows what’s slated to be a major new addition to Dallas—one that will bring a long list of new “accents” and opportunities to the Valley View-Galleria area.

In January, the Dallas City Council’s Economic Development Committee advanced the International District initiative in the 450-acre area north of LBJ Freeway between the Dallas North Tollway and Preston Road, which includes the site of the former Valley View Center mall. At the time, Dallas Mayor Eric Johnson called the district “a wonderful opportunity to boost our city’s presence on the global stage while also transforming an underutilized area into an amazing gathering place that all of our residents can enjoy.”

The new district will provide a unique home for international businesses of all sizes. Its attractions will include a 20-acre central park, one-of-a-kind international festivals, and community gatherings where worlds can collide year round.

We wrote in January about the district’s proposed layout, its status as a Civic Innovation Smart Zone, and the public-private partnership that will fund the initiative. Today we’re sharing new renderings of what the district could look like, what the project could mean for the city, and how it’s connected by a city of Dallas “TIF district” to the Southwest Center Mall on W. Camp Wisdom Road in Southern Dallas.

Built around an “iconic” central park 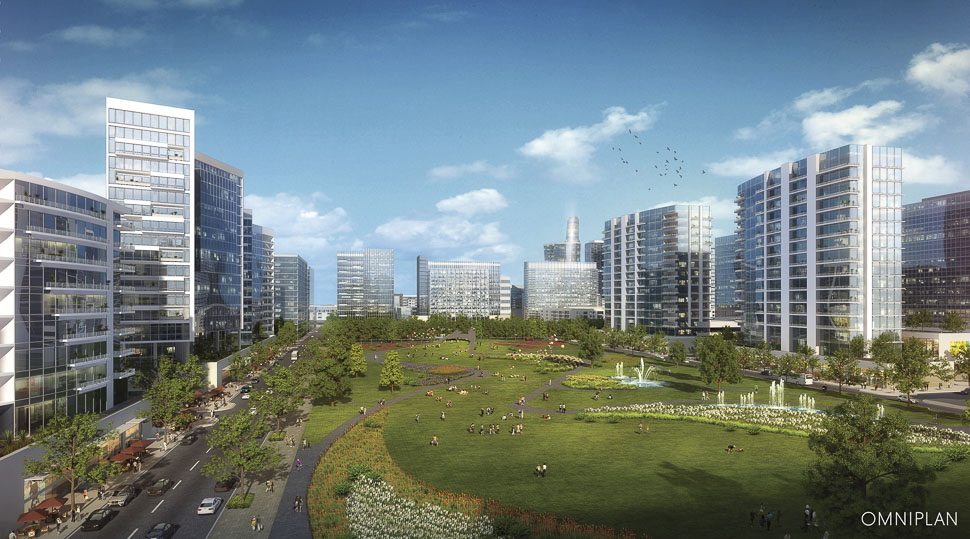 The district’s new buildings will be built around an “iconic” central park. [Image courtesy of Omniplan]

At the heart of the development will be a 20-acre “iconic” park called The Commons of the International District. It will be built with $6 million in funds from the 2017 Dallas bond program, conditioned on a $6 million match of private grants or donations.

MIG, a Berkeley, California-based expert in park design, developed a conceptual master plan for the park back in 2016/2017.

The park’s first parcel has already been acquired by the city of Dallas through the purchase of Prism Center at 5580 Peterson, a building that’s now housing the district office of Dallas City Council District 11. The building will also be the proposed home of an International Business Center and Entrepreneurship Center. 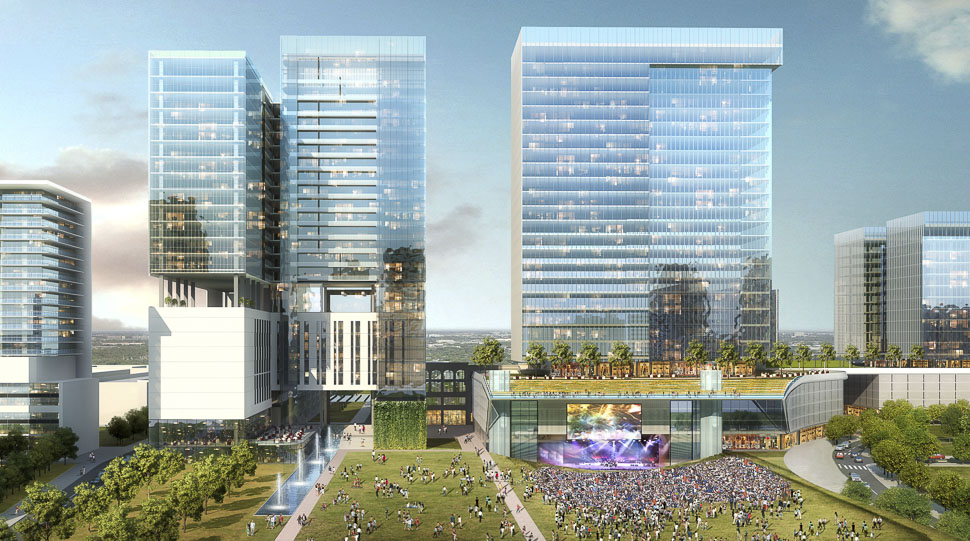 From concerts in the park to innovation within new architectural masterworks, the International District could become a key attraction for the city. [Image courtesy of Omniplan]

The last two years have made millions rethink the office—creating a need for balance between desk work and communal amenities, green space, and places to recharge and connect. The rendering above shows what might await just outside the doors, decks, and walkways of what could one day be new Dallas architectural landmarks.

For the district’s workers and residents near and far, the new district could become an attraction that reshapes part of the city and invigorates its civic life.

As a Civic Innovation Smart Zone, the International District will leverage best practices in smart cities and eco-friendly design. It will also provide a canvas for architects to put their stamp on the city in one of the biggest, broadest scales in many years.

The new park will be a “testing ground for park innovation,” and energy efficiency will be a key goal at Prism Center and new developments in the district. “Green walls” and improved concrete will reduce the impact of an urban “heat island,” while drought-tolerant planting and rainwater recycling systems will help preserve water.

A plan for an automated, elevated people mover in the International District. has been approved by the Dallas City Council. [Rendering: NCTCOG]

In late January, the Dallas City Council approved a transportation plan that includes an automated, elevated “people mover” that would run 2.2 miles across the Dallas International District. Envisioning a future less reliant on individually owned vehicles, the planners aim to connect the people mover to DART lines and other public transportation.

How excited is the City Council about it? They adopted the plan unanimously. The city will now seek federal funding and grants to build the people mover at an estimated cost of $95 million, plus $1.4 million for annual maintenance.

International District plan is 10 years in the making 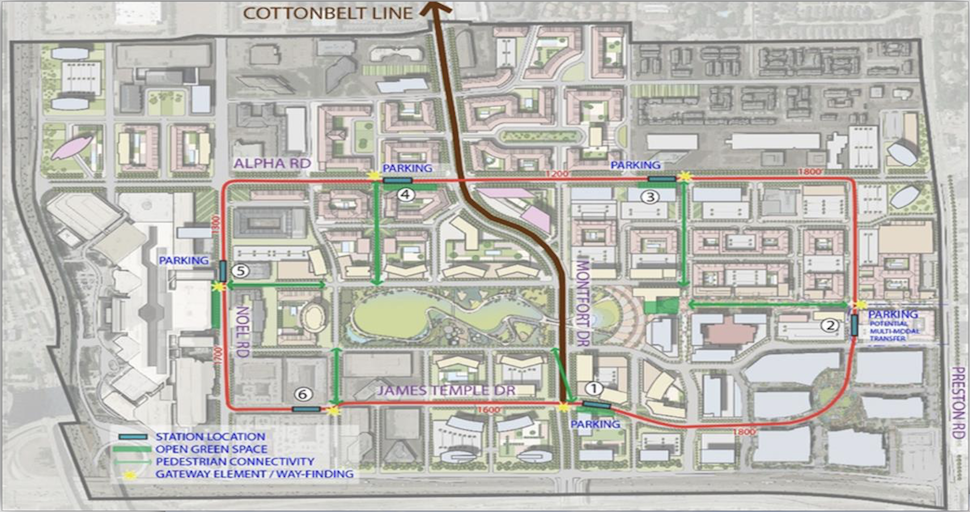 Ten years of planning have gone into the new district, with the aim of creating a walkable, mixed-use neighborhood anchored by a public park—one that can drive economic development, private investment, and public infrastructure investments.

From 2011 to 2013, a public-private partnership was formed by the city of Dallas, the North Dallas Chamber of Commerce, and area stakeholders. In May 2013, the Dallas City Council adopted the Valley View-Galleria Area Plan.

In 2017, Dallas voters approved a $1.05 billion general obligation bond program, which earmarked $6 million toward a Central Park in the Valley View-Galleria area. In recent years, the area has also received designations as a special purpose zoning district and a tax increment reinvestment zone.

The city of Dallas created a Tax Increment Financing district called the Mall Area Redevelopment TIF District that unites investment in both the former Valley View site and the former Redbird Mall in Southwest Dallas—now known as the Southwest Center Mall.

By uniting the two projects into one TIF district, the city’s goal is ensuring “an orderly and expedited redevelopment of these two premier gateway locations.” TIF funds will assist with the provision of public infrastructure improvements that stimulate private investment and the creation of mixed-income housing, the city says, in “one of the nation’s largest urban redevelopment projects.”

The largest retail center in southern Dallas County, Southwest Center Mall is a redevelopment project led by owner and developer Peter Brodsky. Last year, we ran a story by the Dallas Regional Chamber about the many positive things that project had already brought to both the mall and its surrounding area—boosting the access, talent, and purchasing power of Southwest Dallas.

Smith’s public benefit corporation, Social Impact Architects, worked with early stakeholders on strategic plans for the Dallas International District. “Our slogan right now is ‘Connecting the World to Dallas. Sharing Dallas with the World,’ she says