Kodiak Robotics is paving the road to a driverless future with its self-driving long-haul trucking technology. From a new facility in North Texas, Kodiak is testing and growing its freight operations to eventually provide the first commercial application of autonomous driving at scale.

We’ve all seen a lot of buzz in the news about self-driving cars and how they have the potential to affect the future of our roads. Even tech giants like Apple are making a foray into the autonomous vehicle scene. But, one startup has entered the market with a new mindset: The future of driverless technology lies with long-haul trucking.

California-based Kodiak Robotics was founded a little over a year ago as a startup poised to revolutionize the trucking industry through self-driving tech.

Kodiak was co-founded by Don Burnette (CEO) and Paz Eshel (COO), who both have laundry lists of experience. Burnette worked for Google’s self-driving car project and a robotic trucking company that was acquired by Uber, and Eshel hails from VC and enterprise startups.

Together, Burnette and Eshel set out in a new direction on the winding road of driverless vehicles.

Kodiak operates as a true freight carrier, and with its now-growing fleet of autonomous trucks, the startup is setting out to make the roads safer, reduce the cost of carrying freight, and shave off the time it takes to move products.

The trucks aren’t driving all on their own yet, but the startup today announced two big milestones. It has started making its first-ever commercial deliveries (with a safety driver along for the ride) and it’s decided to expand east—where the roads are long and the freight economy is rich—all the way to Texas.

“As you can imagine, a lot of variables went into this decision,” Eshel told Dallas Innovates of the move to DFW. “There’s things on the logical side that facilitate and make it easier for us to start testing and applying this technology, such as weather, the quality of the roads themselves, how hilly it is, and so forth. But there are also other important aspects. Is there enough freight volume in a given geography? Is the regulatory structure that’s in place supportive of such technologies? So, we ended up choosing Texas, and particularly, Dallas.”

Inside the Dallas-Fort Worth facility

The new facility in Dallas-Fort Worth will now be Kodiak’s main base for freight testing, operations, and delivery. Kodiak currently has a temporary office space and is in the process of signing a more permanent lease. Seven employees will operate out of the DFW office, adding to the more than 60 employees Kodiak already has.

The ultimate goal is to make Texas the home of self-driving trucks.

“As a region adding more than 1 million new residents each decade, it is important to develop a comprehensive strategy for the safe and reliable movement of people and goods,” Thomas Bamonte, senior program manager of automated vehicles at the North Central Texas Council of Governments, said in a statement. “Our policy officials on the Regional Transportation Council have been very forward-thinking in their recognition of technology as part of the answer, which is positioning our region as a leader in the automated vehicle industry.”

Get a sneak peek under Kodiak’s hood

The production vehicles that Kodiak has built operate on “middle mile” highway routes. Kodiak built the software from the ground up, integrating cutting-edge AV technology and hardware specifically calibrated for trucks. 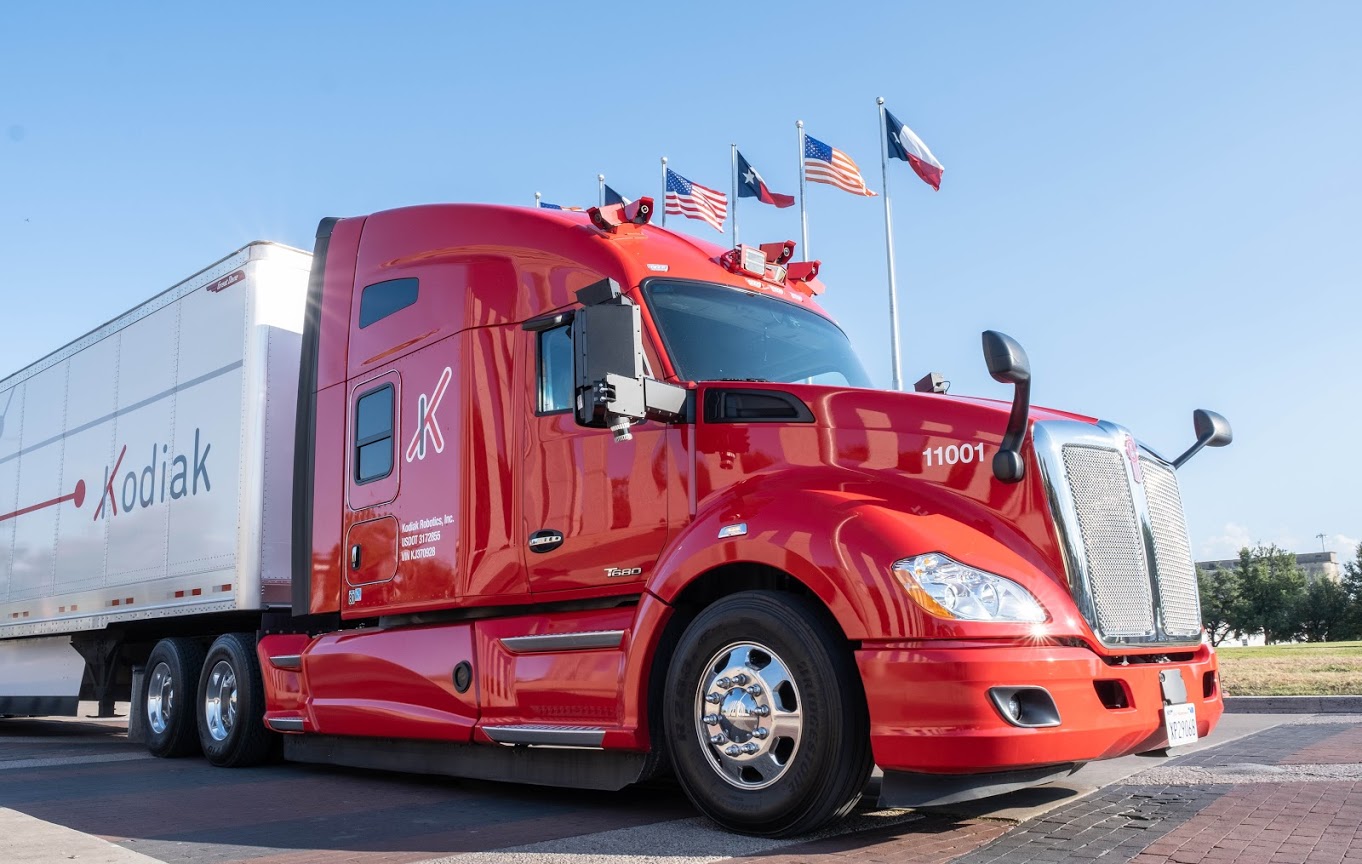 Most of the people behind Kodiak are industry veterans like Burnette, which might be why the startup’s seen such rapid growth. The team all believes that long-haul trucking will be the first commercial application of self-driving tech at scale—it just has to be done safely and effectively.

But Kodiak also declares that it’s “more than just a tech company.”

As a freight carrier, Kodiak is also responsible for hauling goods for commercial clients. But it refuses to actually deploy a driverless truck on the road until it’s proven to be a better option than a human.

“We always verify our system and ensure that our drivers and safety operators have complete control and that nothing bad happens to our trucks while they’re out operating on public roads,” Burnette says. “That’s our number one priority.”

For testing, the truck does a kind of a loop up and down the highway, and then reports back the quality of the ride and performance of the system. Kodiak tracks each performance and makes improvements.

But at the foundation of Kodiak’s core values is that it thinks about and builds autonomy for trucks, not cars.

Think about it like this: You’re driving to your favorite restaurant in downtown Dallas. There’s traffic. Pedestrians are jaywalking. You accidentally turn down a one-way (we’ve all been there). The lane you need to be in suddenly closes for construction.

Those headaches aren’t niche to Dallas. Most dense urban environments are full of unpredictable activities and challenges, even for a human being.

But, on the long-haul interstate highway, it’s way less structured. There’s no crosswalks, intersections, or cyclists, and all of the vehicles are flowing in the same direction.

That’s why Kodiak thinks trucking is the first commercially viable application of self-driving. Cars will eventually follow. Burnette says it will be years before the tech is deployed on the public roads, but Kodiak is a step in the right direction.

“In the self driving industry, there’s always the age old question of, ‘When is it coming?’ The important thing is that we’re taking a safe and responsible approach to developing this technology, and that’s our number one priority as we move forward,” he says. “We’re not looking to move too quickly and jeopardize safety or take any unnecessary risk along the way. I think we’re moving very quickly as a company—especially one that’s only been around for 16 months. We’re extremely proud of getting to these milestones so quickly.”