Populous is growing its global footprint, and hopes its new Dallas office will enhance those efforts in the southern United States as well as Central and South America.

A rendering shows the exterior of the new Esports Arlington Stadium. {Image courtesy of city of Arlington]

Populous, the Kansas City-based sports architecture and design firm with many of the world’s top facilities bearing its mark, has opened a new office in Dallas.

It’s the fifth office expansion in the past three years for Populous, which touts 35 years in the sports design business. Its work includes such high-profile places as Yankee Stadium in New York and Wembley Stadium in Great Britain. Populous’ work has been used in several Olympic Games and other sporting events.

In Dallas-Fort Worth, Populous announced earlier this it would design America’s largest and most robust esports stadium in an unused portion of the Arlington Convention Center.

The company said it hopes the Dallas office, which is operating out of temporary offices on Griffin Street in downtown Dallas,  will enhance its ability to expand its footprint not only in the American South and in Texas, but also in Central and South America.

The firm recently opened offices in New York City, Pittsburgh, Boston, and San Francisco, and has been aiming to open a Dallas branch for a long time. The Dallas office is the firm’s 15th worldwide.

“Having a physical presence in the Texas market has been on our radar for many years; it is indicative of our desire to continually adapt to changing market needs,” Populous Americas Managing Director and Senior Principal Earl Santee, FAIA, said in a press release.

Populous’s new office will be led by Byron Chambers and Jonathan Kelley.

In Dallas, Chambers and Kelley will be working with a team of eight people with the goal of bringing the community together through unique and memorable buildings, the firm said in a release. 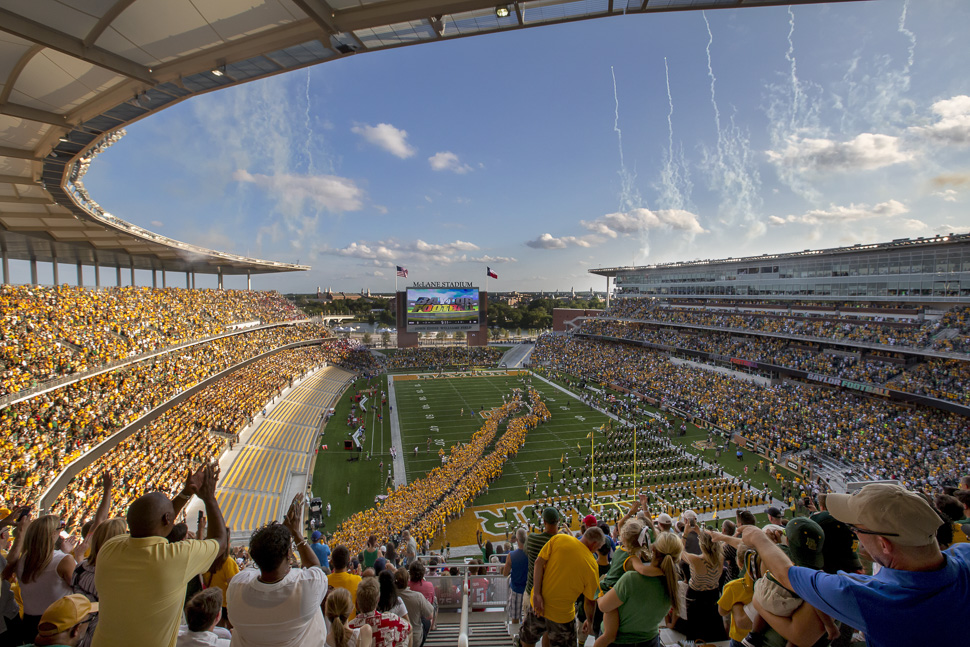 Baylor’s football stadium was created to help brand the school to over 43 million people that drive past Baylor University each year. Populous incorporated several innovative concepts, including the creation of a lagoon around the stadium to promote “sail-gating”, designs to help ‘stitch’ together with the communities of downtown Waco and Baylor University while stimulating both economies, and an amphitheater with a walking path for spectators to enjoy. The project was completed in 2014, and the $250 million projects gave Baylor football the opportunity to play in their own backyard after 60 years of playing at an off-campus location. 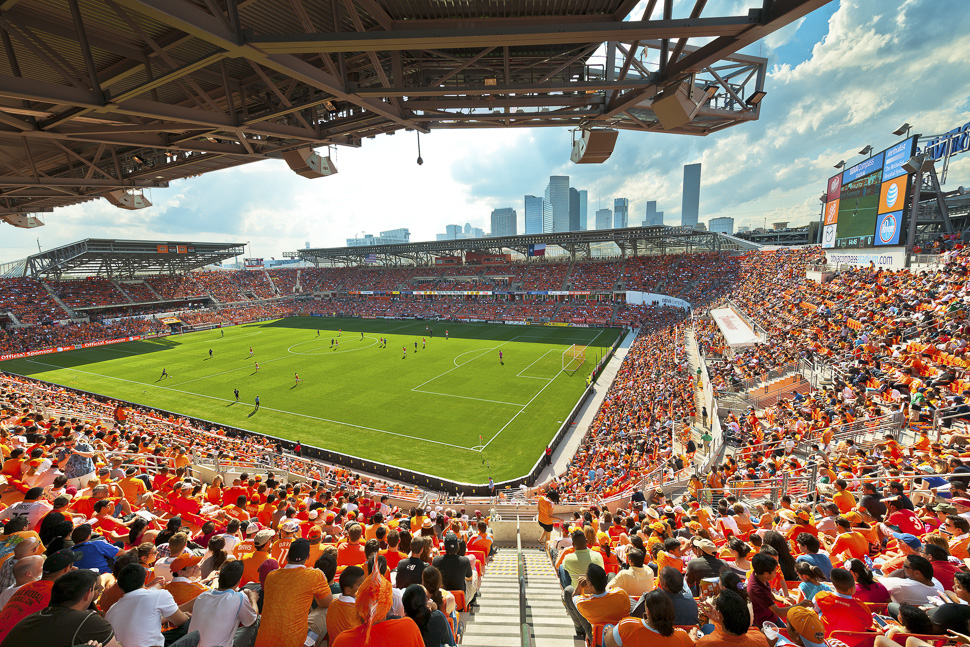 Designed to be the centerpiece for Houston’s East downtown redevelopment plan, the stadium hosts soccer, rugby, lacrosse, concerts, and more. The stadium can hold 22,000 spectators and was created as an innovative way to promote soccer to American spectators. The stadium was designed to create the intimate setting that European soccer games take pride in, and was constructed with a budget of $60 million.

Completed in 2015, Monterrey, Mexico’s soccer stadium is designed to incorporate the area’s culture of steel manufacturing and brewing. The stadium holds more premium seating than any other stadium in Latin America, with more than 4,500 club seats and 324 suites. The stadium caters to the area’s geography, providing shade and cooling comfort while also paying tribute to the Cerro de la Silla Mountain that can be seen from the stadium’s roof. 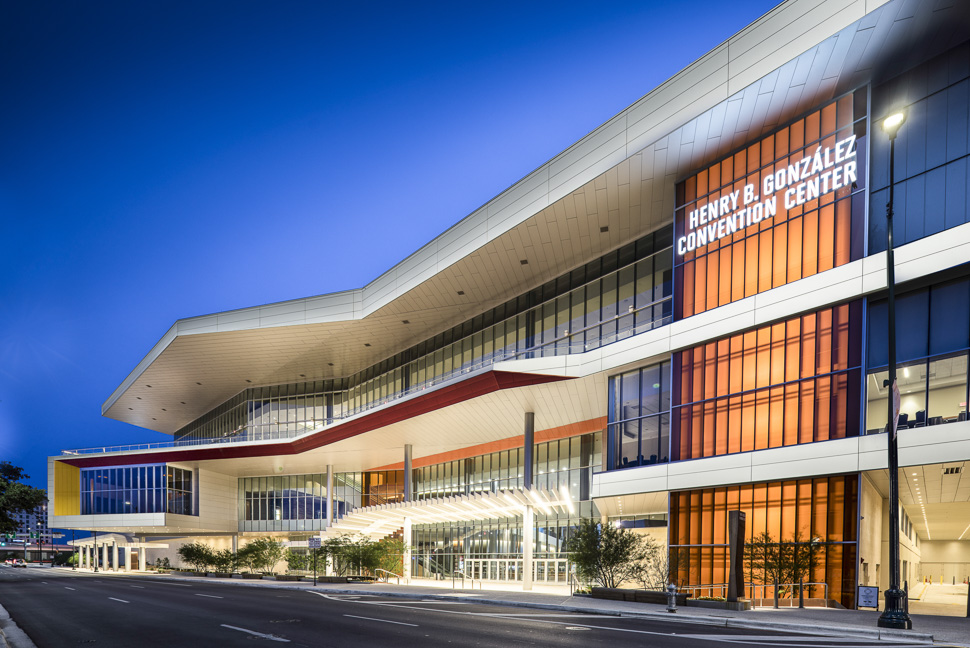 Populous worked to expand and renovate the San Antonio convention center with a $325 million budget. The center includes state-of-the-art exhibit spaces, as well as 800,000 sq. feet added to the existing building in order to accommodate a wider range of events. The architects also rearranged the convention center set-up to expose San Antonio’s famous River Walk to attendees.

Populous worked to ’embrace the temporary’ when designing the stadium for the Olympics, which included their development of the 80,000 person arena for the opening and closing ceremonies that was able to be converted to a smaller area once the games had concluded. By placing the stadium between two waterways, Populous was able to bring Games viewers closer to the events than previous Olympic venues. 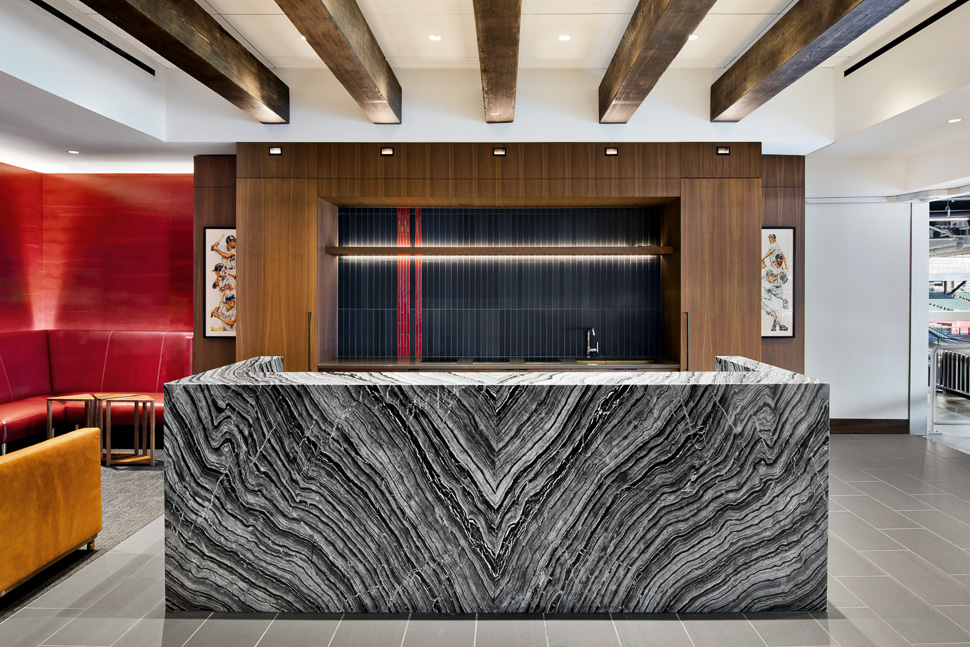 Home of the Atlanta Braves, SunTrust Park incorporates both the southern hospitality of its people and and modern aspects that the fans desired. The stadium has the biggest canopy in the major leagues, which makes fans even louder and provides a sense of intimacy. The goal of Populous was to make the stadium accessible to every kind of Braves fan, and completed the stadium in 2017.

The T-Mobile arena almost became the home to the Stanley Cup champions during the Knight’s first season in the NHL last year. However, Populous had to create an arena that also hosts boxing, basketball and concerts for the people of Las Vegas. The stadium incorporates a 9,000 foot LED screen, and a large glass facade. The arena incorporates both the desert terrain of Nevada as well as the glamour of Las Vegas.

A 2015 renovation aimed to update one of the largest college football programs in the country’s training facilities. Populous created a new entrance, upgraded lockers, lounge areas, training rooms, offices, and more for Aggie nation. Some of these enhancements included charging stations in every locker, LED screens designed to display player information, and a barber shop.

You can learn more about Populous here

Getting in the Game: Arlington Repurposing Convention Center into Esports Stadium