David Frugé noticed a disconnect in the music booking industry.

Venue managers struggling to fill slots and musicians getting paid very little for their craft. With a digital platform, Frugé believes he can cultivate those relationships more efficiently to help relieve stress and offer a financial win-win for the venue and live talent.

The Fort Worth resident partnered with five others at Startup Weekend Fort Worth earlier this month to bring the idea to life. The 54-hour event challenged participants to pitch ideas and launch a business all in one weekend.

Their winning product, Buzz Local, first will focus on getting musicians and Fort Worth venues signed on, but Frugé sees the potential to eventually expand to other markets.

“Our beachhead strategy for this is to then go to Dallas, Austin, Houston, and San Antonio. Then after that, spread outside of Texas,” he said.

In the next month, they’ll be working to create the initial app connecting venues and musicians. In the long term, Frugé hopes they can encourage audiences to seek out more local entertainment experiences.

Frugé took a moment this week to talk with Dallas Innovates about the new venture. Responses have been edited for brevity. 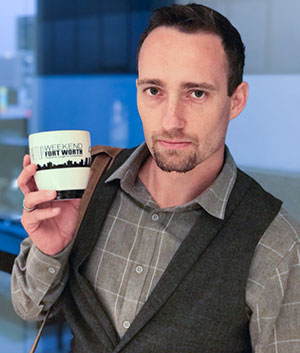 What led you to start Buzz Local?

I became very concerned that musicians were not getting paid to perform or if they were getting paid, it came out to $8-$10 an hour and this is at venues that hold a 150 or less as their capacity. So, bars, restaurants that you go to and people just happen to be playing.

As an entrepreneur, talking to my friends and finding out that they are getting paid a $100 a night for a band of four— they aren’t making any money, they are doing it because they love it. And, I basically said to them, ‘I want to see if I can find a way to help you guys make more money.’

Can you explain your product/business?

Do you remember how restaurants had to do everything by paper? Well, restaurants need live performance, but it hasn’t been digitized at all. So, the same way restaurants got point of sale systems to digitize and use computers to improve their efficiency in their sales, customer service, and with their food preparation, we’re trying to do the same thing with [helping] venues like bars and restaurants connect with music talent. And a lot of these musicians — solo, duo, trios, sets of musicians — they don’t have managers yet. They don’t make enough money to have managers. They are just getting their name out there.

“The big things we are trying to push are modernizing the local music booking industry, that’s done [right now] through just paper, emails, and phone calls.”

So, the big things we are trying to push are modernizing the local music booking industry, that’s done [right now] through just paper, emails, and phone calls. So, we are getting them plugged into the [online platform] and we are giving businesses access to all this data that’s being lost right now. Businesses aren’t able to keep track of ‘did this band bring the house tonight? or Did this band do horribly?’ and then share that with other businesses.

Where did you come up with the name Buzz Local?

I had all these different names I liked for it. I just pitched it as Live Local because your name has to make sense. If you were to say, ‘Uber,’ 10 years ago nobody would know what you were talking about. Some of the names we had before that were Venue Connect, [and] some really silly names that capture what we do. Then we just got to the point where [we said] ‘we are trying to create local buzz. We are all about the local experience. We are pro local business.’ I guess we were just thinking music, buzz [go together].

How big is your team?

The founding team is six people (Bobby Bindra, Dustin Dvorak, David Frugé, Lee Trawick, Sholon LeBar, and Kalyntheus Carey). That’s how many were at the competition and we are not adding any other founder spots. All the other spots will be salary spots or advisory board spots.

Right now, we have a basic mobile responsive website, but we are over the next 30 days, cranking out the MVP, which will be the basic app that, at first, will just connect venues with musicians.

We’ve identified around 200 locally-owned businesses that are bars, restaurants, or coffee shops in [Fort Worth] that either currently have live music or can have live music that have capacities under 250.

We are bootstrapping these venues, so we are doing everything for them for free. We’re getting them plugged in for free and letting them use the product for 90 days and we are getting all the musicians plugged in. Our goal is to make it permanently free for musicians.

How do you plan to generate revenue?

Our main goal with the company is to after 90 days of showing these businesses of how we increase their revenue, then we’ll begin to charge them a rate that is insignificant to them, but once you start to add it up, it becomes a lot.