The Deep Ellum Foundation has installed new streetlight pole banners showcasing the work of local Deep Ellum tattoo artists. Here's a gallery of the designs you'll see if you walk or drive through the neighborhood. 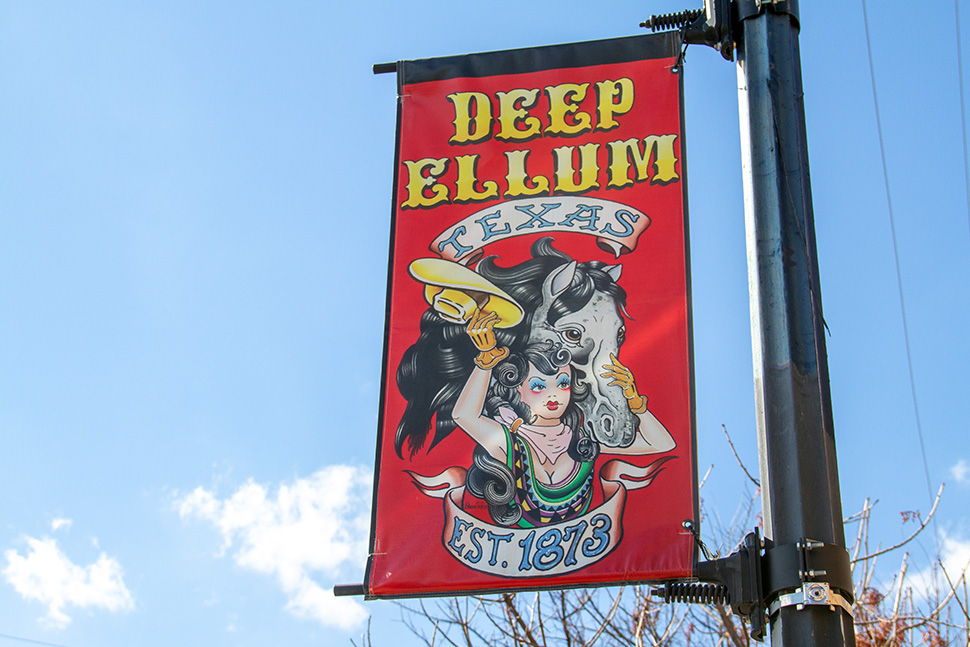 The banner above is being presented again as a tribute to its designer, the late Norman Dean Williams, who was a founder and owner of Elm Street Tattoo. [Photo: Deep Ellum Foundation]

You’ll see new signposts ahead when you walk or drive through Dallas’ Deep Ellum.

One banner honors a fallen artist

For the first time ever, the foundation is returning a banner to one of the light poles, in honor of the late Norman Dean Williams, who was a founder and owner of Elm Street Tattoo. His banner, featuring a cowgirl with her horse, is seen in the photo above.

“Dean passed away this summer, which has left a big hole in our hearts,” Shawn Hodges of Elm Street Tattoo said in a statement. “He was truly one of a kind.”

Each banner captures one artist’s style

Each of the 10 banners on display spotlights the style and expression of one Deep Ellum tattoo artist. For an insight into one creator, check out the design at bottom right in the gallery below. Here’s how its designer, Damian Reign of Dallas Tattoo and Arts Company, described it in the statement:

“The piece depicts a beautiful woman resting atop a skull in a martini glass with the setting sun behind her. This breathes to life the heart of the night life in Deep Ellum. Drinks, late nights, and beautiful people. The tattered look of it all and the use of American Traditional artistry encapsulates the feeling of pride in the history of this beloved city and its culture,” Reign said.

Inked-up banners have flown in the past

Deep Ellum showcased neighborhood tattoo artist banners once before. That was back in 2017, and it proved so popular and memorable it’s being reprised for 2022.

Now, here’s a look at the other nine banner designs currently being featured on Deep Ellum streetlight poles—along with their artists’ names and shops: 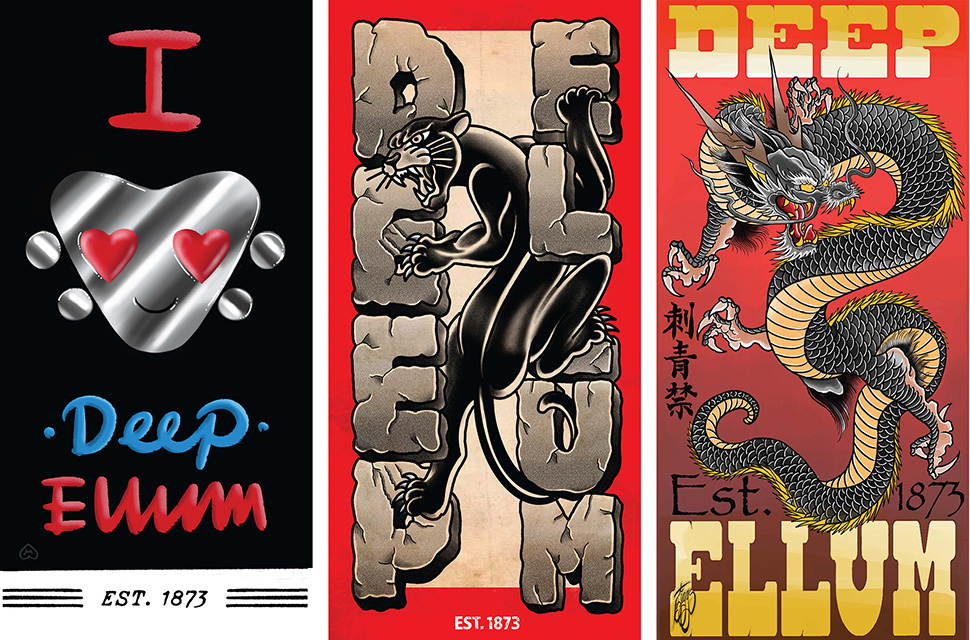 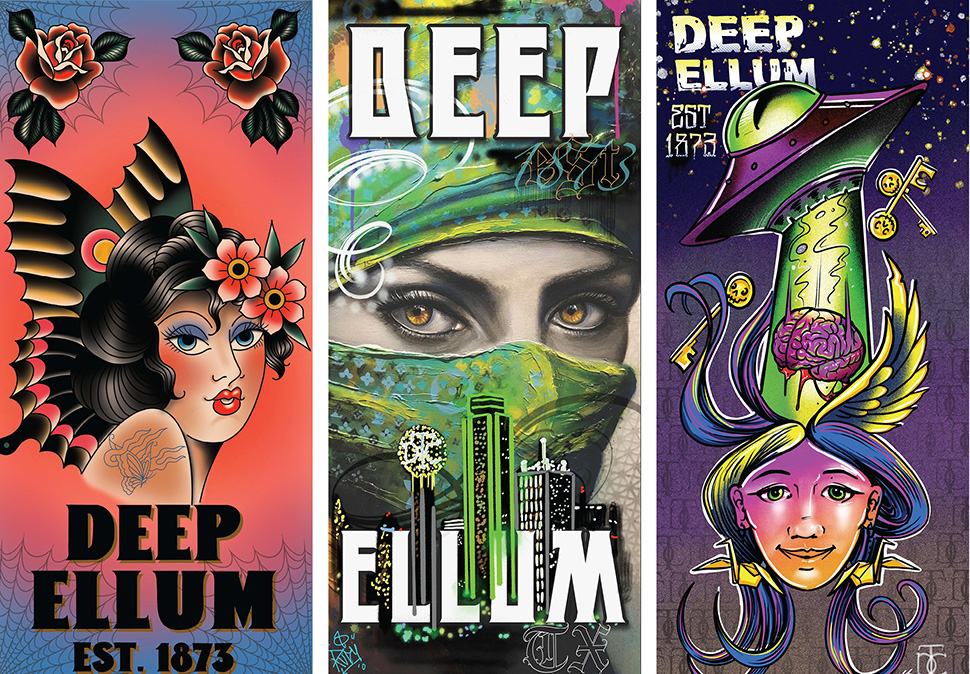 From left, banners showcase designs by Kat Freedman of Taboo Tattoo, and Rudy Hetzer and Mike Duncan of Dallas Tattoo and Arts Company. 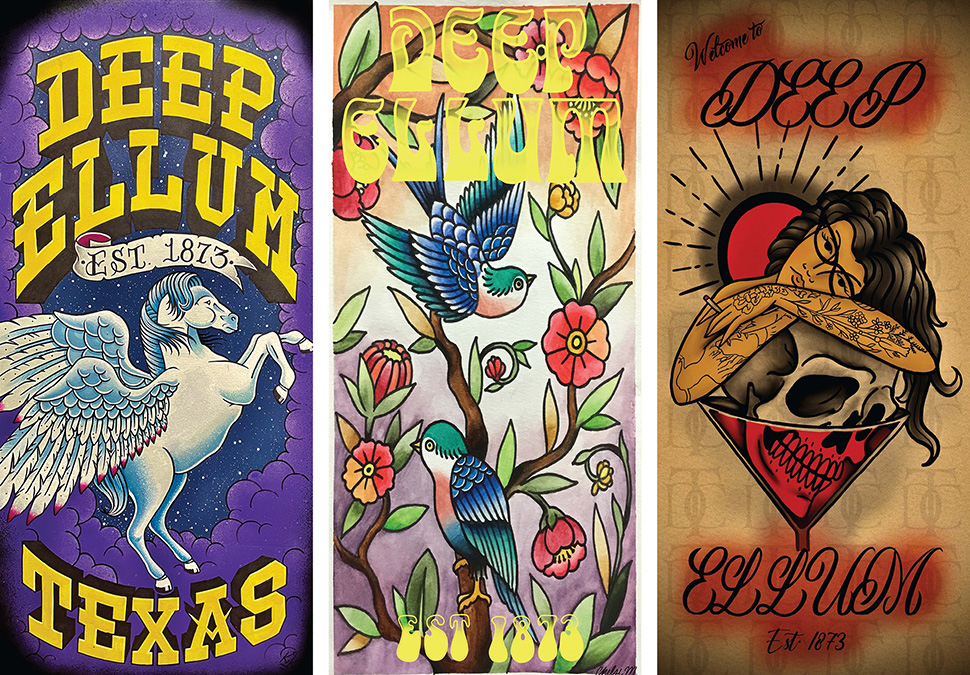 From left, banners showcase designs by Kendall Kirkland and Chelsi Morrow of Taboo Tattoo, and Damian Reign of Dallas Tattoo and Arts Company.