With a new research and development center, Dallas-based Borden gives a new look to its 83-year-old mascot, Elsie, and doubles down on efforts to introduce innovative new products.

Borden, the longtime dairy brand headquartered in Dallas, has introduced a research and development center to launch new innovative products, change its leadership, and re-establish marketing and sales functions.

With its new ownership and leaders, Borden said it has a focus on its people and an “optimistic vision” to reclaim its position atop the dairy industry.

But, at the center of the 162-year-old company’s efforts to boost its profile and sales, is a more modern makeover of an iconic 83-year-old cow named Elsie.

Borden, founded in 1857, introduced Elsie in 1936. She quickly became one of the nation’s best-known brand mascots. AdAge later named Elsie one of the Top 10 advertising icons of the 20th century.

“Despite not having made marketing investments in recent years, the Borden brand still holds a lot of equity, driven by over 150 years of dairy leadership,” Borden Chief Marketing Officer Joe DePetrillo said in a statement. “Elsie remains a beloved and iconic representation of this proud heritage with people of all generations. For these reasons, we wanted our brand refresh to be evolutionary in nature rather than revolutionary. We were mindful to respect the familiarity and trust Elsie has earned, while ensuring that our brand stays relevant to today’s consumer.”

A Borden truck illustrates the revival of Elsie, Borden Dairy’s iconic spokescow, as the company steps back into the spotlight with new leadership, a new look and glass half-full optimism to reclaim its position as the undisputed leader in the dairy industry. [Photo: Courtesy Borden]

At one time, Borden was the only national dairy company in the U.S. and the world’s largest dairy operator, topping $7 billion in annual sales.

The company will introduce a new marketing tagline as part of Elsie’s reintroduction—”Glass Half-Full since 1857.”

“Our research showed that Elsie represents pure joy and optimism for American families, which we are harnessing as key drivers in all marketing initiatives in 2019,” DePetrillo said.

Borden said it has partnered with the Dallas marketing and advertising firm BrandCory on refreshing its logo, and with Ohio-based Curiosity for its marketing strategy and plan.

Curiosity will support a fully integrated campaign, including creative, consumer strategy, and media to announce that Borden is back and better than ever.

Elsie became a celebrity, making appearances at the Macy’s Thanksgiving Day Parade in New York City, the World’s Fair, major universities, and cameos in Hollywood and on Broadway. 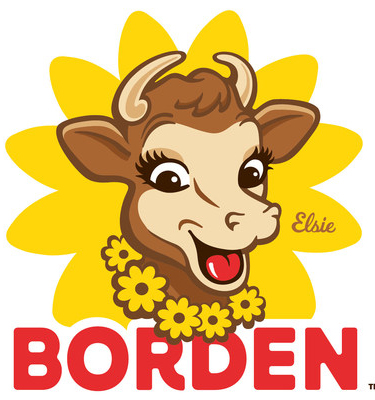 After ownership changes in the 1980s, Borden said it ran into turbulent times after it was acquired by New York-based Kohlberg Kravis Roberts & Co. As sales dropped, KKR sold off many of Borden’s divisions and brands, and Elsie’s star faded because of limited exposure and a lack of marketing support.

The website Dairy Foods said that much of the company’s dairy operations were later acquired by Grupo Lala of Mexico. In 2011, Grupo Lala changed the name of its Dallas-based LaLa-USA operations back to Borden Dairy Co., the website said. In 2013, Borden Dairy was spun off into the privately held Grupo Lala-owned Laguna Dairy, S.A. de C.V.

Now, Borden is a newly independent company with its eye on gaining momentum and industry share. It’s Led by new Chief Executive Officer Tony Sarsam, who has more than three decades of experience with some of the leading companies in the food industry.

Sarsam took the reins of Borden in March 2018.

“Borden has a rich history spanning many decades and filled with both victories and lessons learned,” Sarsam said in a statement. “When it comes to our future, the people of Borden have a ‘glass half-full’ outlook. We are passionate and ready to bring innovation and pure joy to milk lovers everywhere.”

To benefit from the public trust in the Borden name, DePetrillo told Dairy Foods that the company is taking a step-by-step approach to its product innovation efforts. Borden already has identified its strategy, the territories in which it wants to compete, and what the Borden brand stands for, with In-depth focus groups being a major part of that the innovation undertaking, he said.

Borden is engaged in concept development and validation, and brought together a broad internal cross-functional group for brainstorming and product ideation, Dairy Foods noted.

“Then we’ll converge and select ideas to test,” DePetrillo said. “Next, we’ll do concept testing, as well as an internal feasibility assessment.”

Borden taking its comeback one stage at a time

Once all of that is done, the company said it will re-evaluate the concepts and enter stage two of development process, DePetrillo said. That involves formulation development and market opportunity refinement. Then, stage three will take any concepts closer to launch and stage four will entail the the actual launch of the concepts.