Coming to 7-Eleven's Evolution Store on Park Lane and Abrams Road is the first-ever Laredo Taco Company drive-thru restaurant. It marks the latest innovation at one of the Irving-based retailer's 'lab stores,' an experiential testing ground for patrons to try new concepts. 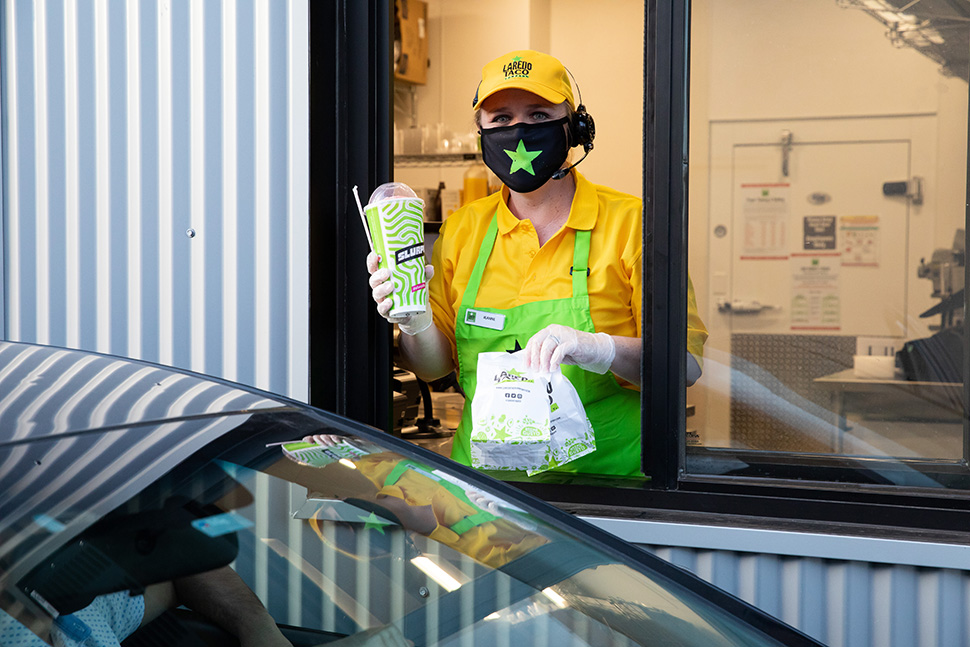 7-Eleven is putting out a call to all taco lovers with the latest update at one of its Evolution Stores in Dallas: Laredo Taco Company is getting a drive-thru.

Located at Park Lane and Abrams Road, the first-ever Laredo Taco Company drive-thru restaurant will serve up its South Texas-inspired eats and drinks. The joint, which also has indoor seating, will share space with the newest 7-Eleven Evolution Store, offering the ability to order both authentic tacos and 7-Eleven favorites.

The news marks the first time 7-Eleven has operated a corporate-owned drive-thru restaurant at one of its stores.

“While opening the first Laredo Taco Company drive-thru restaurant with a 7-Eleven store would be exciting any time, we think customers looking for socially distanced ways to grab breakfast, lunch, and dinner will really appreciate it now,” Chris Tanco, 7–Eleven executive vice president and chief operating officer, said in a statement. “Soon I hope, ordering tacos and beverages for in-person get-togethers with family and friends will be the norm once again.” 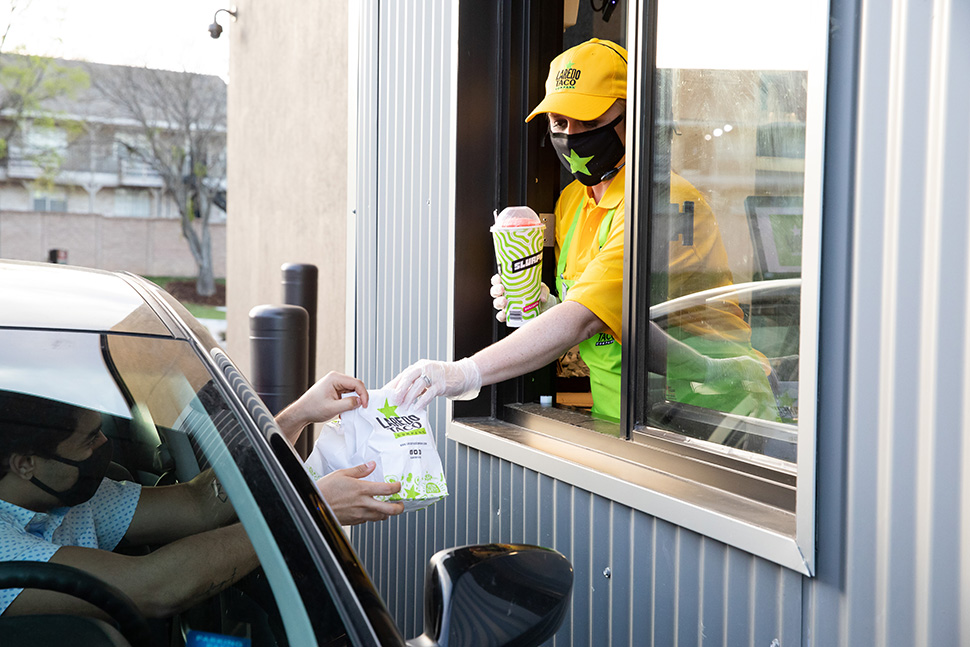 In 2019, Irving-headquartered 7-Eleven first introduced its ‘lab store’ concept as an experiential testing ground for patrons to try new concepts. The only one in the U.S. at the time, the store opened at Sylvan | Thirty with a “revolutionary” new format that included limited-time offerings, digital initiatives, and made-to-order menu items.

It also was the first 7-Eleven location to incorporate a Laredo Taco Company taqueria—and became the Tex-Mex restaurant’s first location in Dallas.

That opening came on the heels of 7-Eleven acquiring the Laredo Taco Company restaurants, along with Stripes convenience stores, as part of a 1,000-store acquisition from Sunoco in 2018. Some three years later, the convenience store giant and gas station taco maker are furthering their storied history.

As a “beverage destination,” the Evolution Store format allows 7-Eleven to test its newest drink ideas before introducing them across the entire retail chain.

In a single stop at the new drive-thru, customers can order a Slurpee (7-Eleven’s cult classic), fresh-brewed coffee or espresso, or traditional beverage choices like aguas frescas, fountain drinks, iced tea, Topo Chico, and anything else canned and bottled. Inside, diners can grab wine-based frozen margaritas, beer, or wine.

In all, there’s more than 30 drink options and even more food combinations—the intent is to combine a traditional taco drive-thru with the best 7-Eleven has to offer.

“This is delicious news for customers of both 7-Eleven and Laredo Taco Company,” Tanco said. “7-Eleven is known as a beverage destination, and Laredo Taco Company makes some of the best quick-serve Mexican food anywhere. Throw in the convenience of grabbing a taco paired with a Slurpee drink through a drive-thru, and it’s a match made in heaven.”

The 7-Eleven Evolution Store at Park and Abrams is the third of its kind in Dallas and the sixth in the country—but no two are exactly alike.

The Evolution Store is 7-Eleven’s foray into innovation, with each spot stocked with the retailer’s newest products and technology to see what sells. All come equipped with a restaurant concept, but 7-Eleven alters the design and product mix based on customer feedback and shopping habits.

For instance, the Evolution Store at Park and Abrams has a self-serve bean-to-cup coffee and espresso bar, baked cookies and croissants, skincare and cosmetics items, a wine cellar and beer cooler, and a slew of organic better-for-you items.

Digitally, initiatives are incorporated that enhance the shopping experience. Customers can skip the line and pay for non-age-restricted purchases on their smartphone with mobile checkout technology and the 7Rewards loyalty program in the 7-Eleven app. Or, they can use the app to have items delivered to their door or available for pickup.

The Evolution Store at Park and Abrams is just one of 7-Eleven’s plans for 2021. The retailer expects to open concept stores in North Texas and Manassas, Virginia throughout the year.

The retail innovator that literally invented the convenience store concept and trademarked the word “brainfreeze” is also elevating its game by identifying artists to create neighborhood-specific murals on interior and exterior walls of its existing and new 7-Eleven stores. 7-Eleven has teamed up with The Ammersion Group, a new Dallas-based creative agency, to help.

Step inside 7-Eleven’s Evolution Store at Park and Abrams. Note that the Laredo Taco Company drive-thru is open Sunday-Thursday from 5 a.m. to 10 p.m. and on Fridays and Saturdays from 5 a.m. to 11 p.m. Breakfast is served from 5 a.m. to 10:30 a.m. and there’s also an all-day menu and meals for “los niños” that include a side and a small drink. 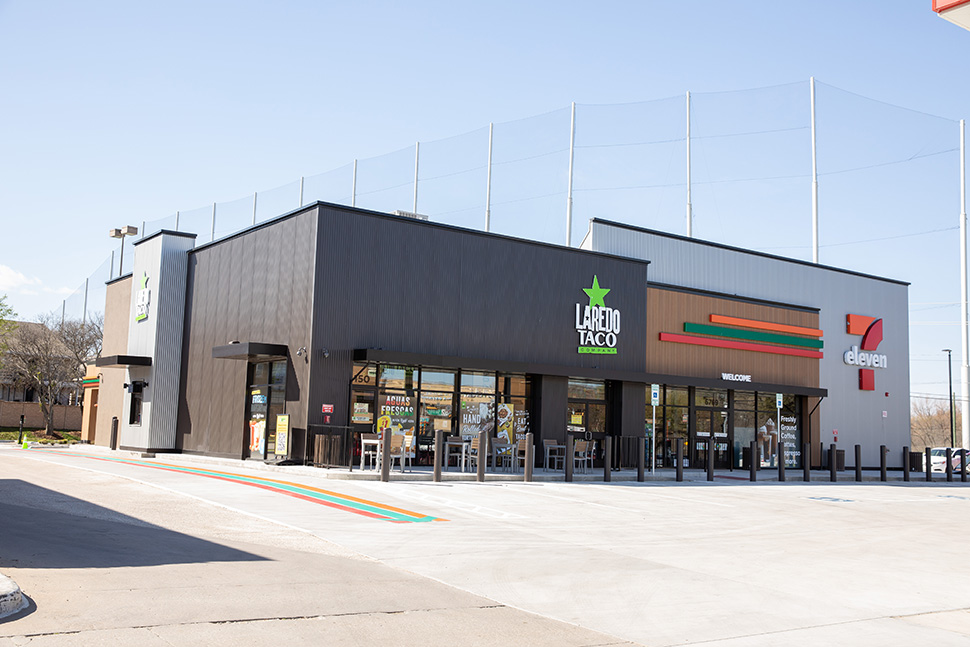 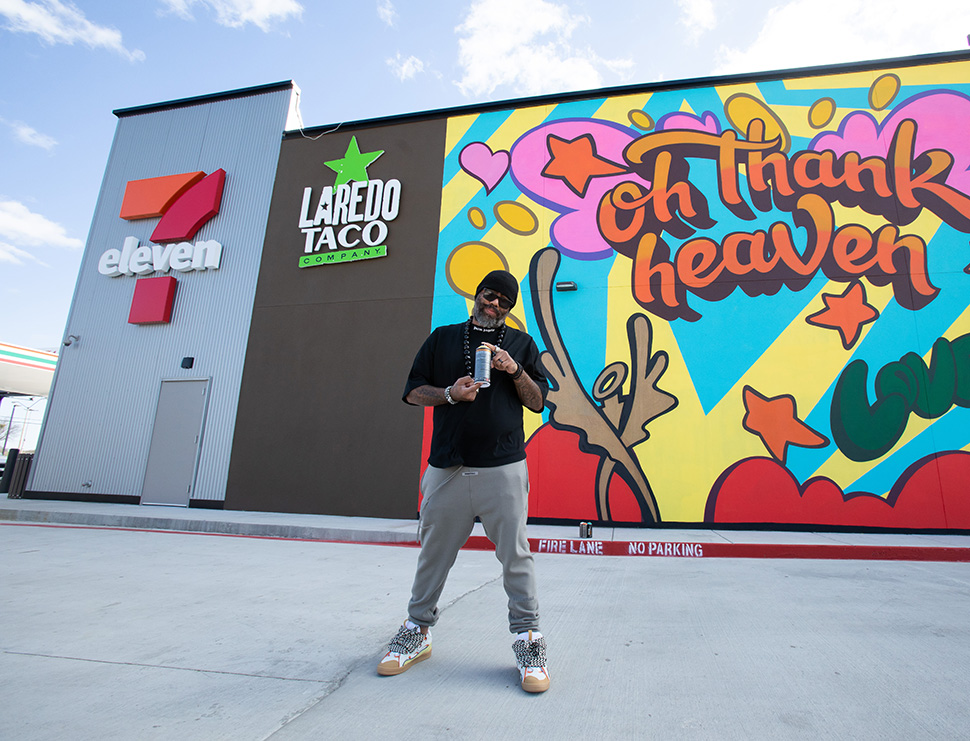 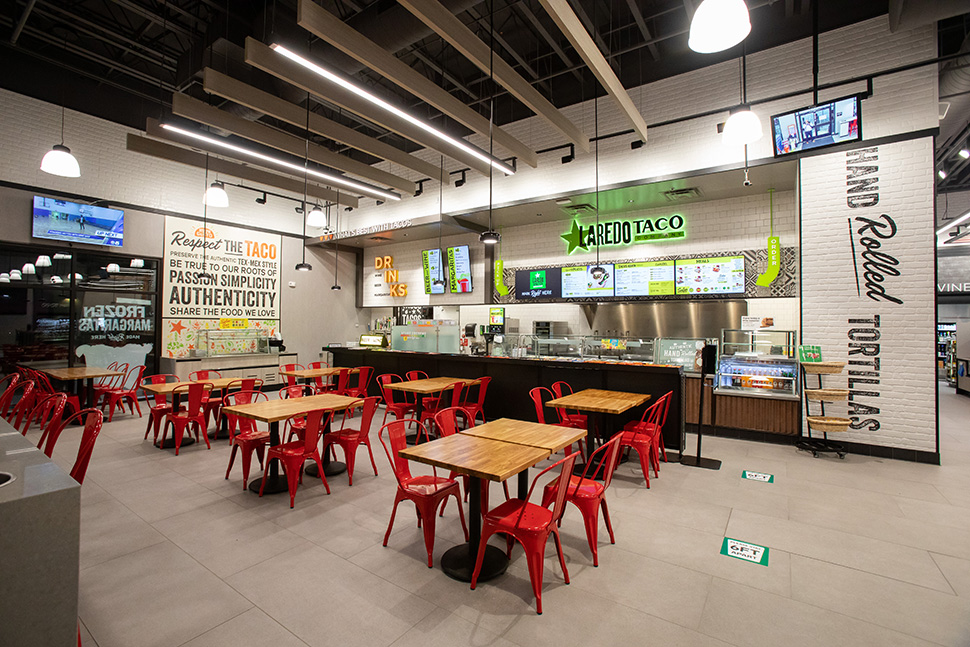 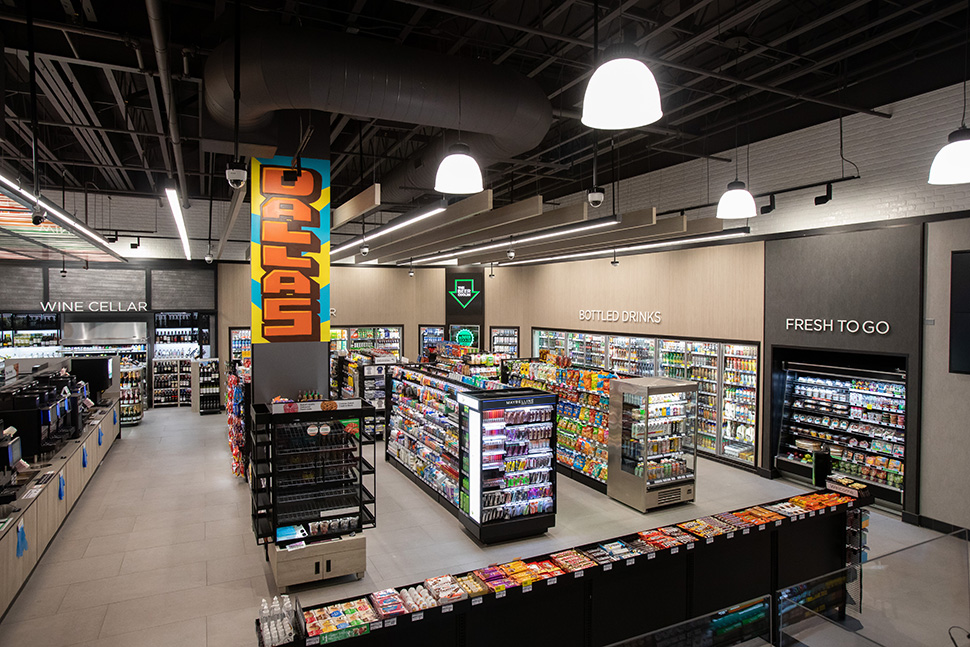 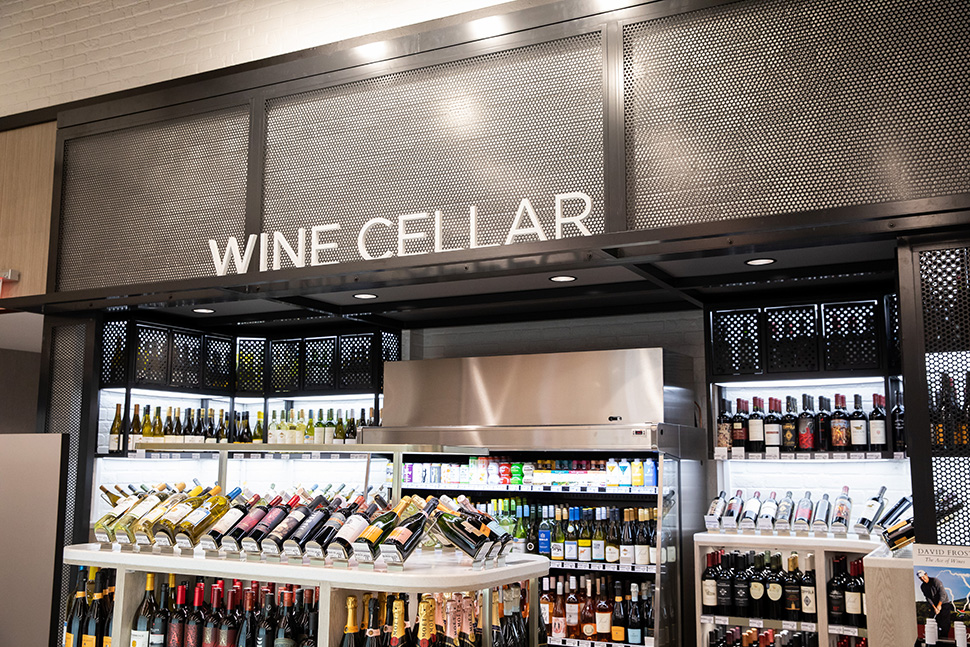 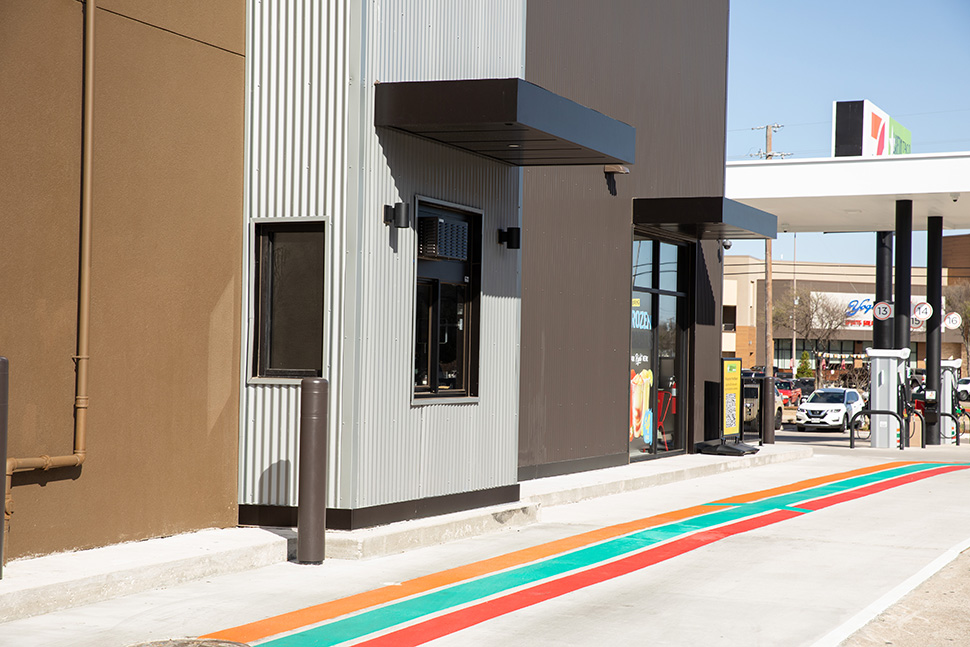 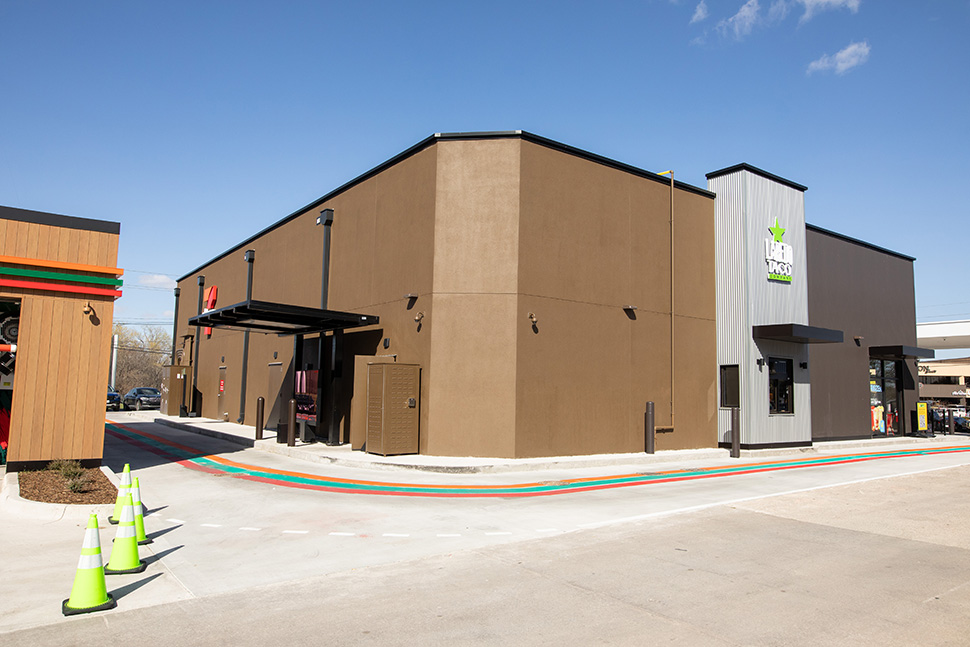