Will Dallas-Fort Worth Get Its Own HyperLoop or Bullet Train Line? Open Houses Take Us One Step Closer

A transportation study team is exploring a potential high-speed Dallas-Arlington-Fort Worth rail line along the I-30 corridor. The North Central Texas Council of Governments is holding open house presentations on the project—which could ultimately lead to a bullet train or hyperloop whizzing us between the cities.

Update, February 17, 2022: The Regional Transportation Council has eliminated the hyperloop discussed below from consideration, in favor of a high-speed rail line between Dallas and Fort Worth which can operate at speeds of up to 250 miles an hour.

It’s 5:15 p.m. on Thursday, October 14. Google Maps says it will take 50 minutes to drive from downtown Dallas to downtown Fort Worth. Public transport via the Trinity Railway express train takes 56 minutes. If you’re thinking “there’s gotta be a faster way,” then we’ve got an open house for you.

The North Central Texas Council of Governments (NCTCOG) is holding open house presentations on its study of a proposed high-speed rail line between Dallas and Fort Worth. In coming years it could ultimately lead to a bullet train or a hyperloop whizzing us between the cities, with a quick stop in Arlington along the way.

Goals of the Dallas-Fort Worth High-Speed Transportation Connections Study

The 36-month study began in May 2020 and is being conducted by the NCTCOG in cooperation with the Federal Railroad Administration and the Federal Transit Administration. Its goals are selecting a passenger technology; identifying potential alignments/routes; and receiving federal environmental approval.

Once that’s achieved, the project can move on to the harder stuff: securing funding, detailing the design, acquiring right-of-way, and beginning construction.

Where would the high-speed line go?

As you can see above, the project study team explored a lot of corridors and alignments. The initial set included a route along Highway 180 that lined up with AT&T Stadium, Globe Life Field, and UT Arlington. Other options swooped northward along Highway 183 and to the south along Spur 303.

But last May, the study team narrowed its recommendations to what you see below: a three-station, one-seat ride along the I-30 corridor between Beckley Avenue in Dallas and Beach Street in Fort Worth. “The most direct and least disruptive route for connecting Downtown Dallas and Downtown Fort Worth with a stop in Arlington was determined to be along I-30,” the NCTCOG said.

Didn’t I hear about another bullet train in Dallas?

Yes, that would be the planned Texas Central bullet train line between Dallas and Houston. We’ve written recently about Texas Central’s $16 billion design-build contract and how Spain’s Renfe has been signed to be the operator. But the Dallas-Fort Worth high-speed line is a different project.

The Dallas-Arlington-Fort Worth line could link to future high-speed services, like the Texas Central line and the Fort Worth-to-South Texas corridor, which is also being studied for a potential high-speed option: 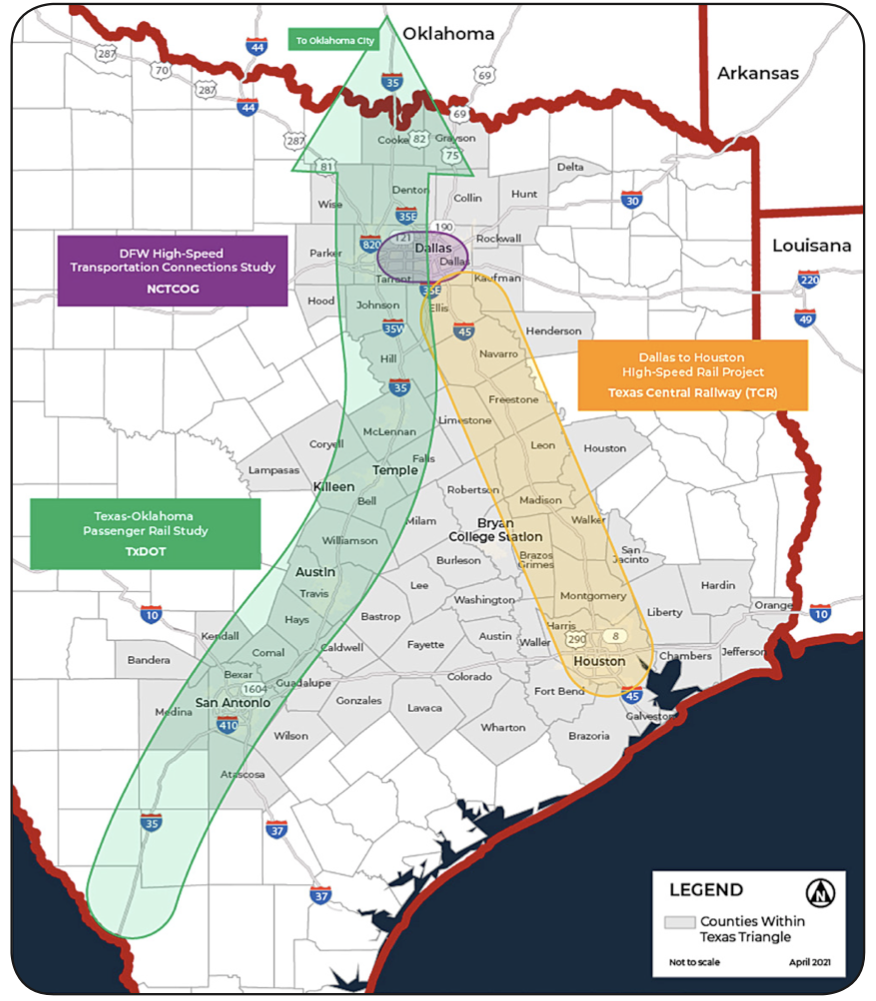 Three Texas high-speed rail lines could all lnk up in Dallas-Fort Worth. [Image: NCTCOG]

On July 8, the NCTCOG’s Regional Transportation Council approved moving into the second phase of the study, which will further explore the I-30 corridor and the high-speed rail and hyperloop options. The study team will also develop plans for operations and service, prepare preliminary engineering, and compile environmental documentation.

How fast are we talking?

Here are the two recommended options. Hold on to your hat:

The high-speed bullet train would have a maximum speed of 250 miles per hour. New, exclusive tracks would have to be built for it. It would run on a fixed schedule similar to how high-speed trains run now in Europe and Asia, including Japan’s Shinkansen service. A bullet train project like those is currently under construction in California between San Francisco and the Los Angeles basin.

The hyperloop has an even faster maximum speed of 650 miles per hour. New, elevated hyperloop tubes would have to be built. But unlike bullet trains, a hyperloop could be used on an unscheduled, on-demand basis, with only two minutes needed between two trains or “pods.”

In a hyperloop, passenger-carrying pods accelerate through an extremely low-pressure tube, gaining the ability to approach the speed of sound. Here’s a great look at the proposed technology.

On the other hand—unlike high-speed trains which have been in operation for several decades—hyperloop technology is still only in the prototype testing stage. But that hasn’t stopped the NCTCOG team from recommending hyperloop as an option.

“While it is not proven at this time, by the beginning of construction on this project, it is anticipated that hyperloop technology would likely be ready for service,” the NCTCOG study team says.

A caveat on the speed

Even with the hyperloop, you wouldn’t be zooming at 650 MPH from start to finish. That’s just the maximum possible speed of the potential technology. A stop in Arlington makes the distance traveled between stations relatively short, so there must be time for safe acceleration, deceleration, and onboarding and offboarding.

The NCTCOG says that even on an express, nonstop run between Dallas and Fort Worth, the goal is simply to make the trip “in under 20 minutes.” That would still cut around 40 minutes off a rush-hour car ride.

“The goal is to provide a reliable service that takes less time to travel between Fort Worth and Dallas, which can typically take up to an hour in a car during peak periods,” the NCTCOG said in a recent DFW High-Speed Update newsletter. “Technology and alignment alternatives with express service in under 20 minutes between Dallas and Fort Worth are being considered.”

Where would the stations be?

In Dallas, a new rail station for the high-speed Dallas-Arlington-Fort Worth line would be built near and tie into the proposed Texas Central bullet train station, just south of the Dallas Convention Center in the Cedars neighborhood. Two potential Dallas station sites are shown below in orange, north and south of the orange Texas Central station location.

In Fort Worth, the study team’s primary proposed location is Trinity Metro’s existing Central Station along I-35W downtown. But six other downtown-area sites are also being explored.

For the midpoint Arlington stop, three potential station locations are being explored between Six Flags Over Texas and Collins Street.

The study team may also consider an alternate, intermediate station location based on specific alignment and technology requirements.

Will the rail line be elevated, in tunnels, or on tracks on a grade?

“Given the dense urban environment between Dallas and Fort Worth, the high-speed technology chosen (either high-speed rail or hyperloop) is expected to be grade-separated for a majority if not the entire length of the corridor,” the NCTCOG’s Brian Wilson told us.

So most, if not all, of the high-speed line between Dallas and Fort Worth will be elevated above ground. The expensive cost of tunneling makes this option more economical.

When can we take a ride?

Not anytime soon. The initial three-year study is scheduled through May 2023. If the project moves forward, it will take years to secure funding, acquire right-of-way, build the needed stations, and construct the high-speed rail line or hyperloop.

What can I see at the open house?

At the NCTCOG open houses, a short video playing on a loop will offer an overview of the project. Presentation boards throughout each venue will explain the different high-speed technologies and offer a closer look at the recommended route.

Attendees will be able to interact with the project team while getting a good sense of all the Phase I recommendations. If you have comments about the project, they will be accepted in person at the open house, or you can make them online here.

When/where are the open houses?

The free, in-person open houses are being held in large venues to allow for social distancing. The first one was held Tuesday at Lone Star Park in Grand Prairie.

The next open house will be in Fort Worth from 4 to 7 p.m. Tuesday, Oct. 19, at Southside Preservation Hall at 1519 Lipscomb St.

Each location will offer free parking nearby.

About the NCTCOG and Regional Transportation Council

The NCTCOG’s Regional Transportation Council has served as the Metropolitan Planning Organization (MPO) for regional transportation planning in the Dallas-Fort Worth area since 1974.