It's the first acquisition by WeWork as a public company since its new CEO's arrival.

Common Desk, founded in Dallas by Nick Clark in 2012, has grown its network to serve 4,000 customers at 23 locations in Texas and North Carolina. It will now operate as "Common Desk, a WeWork Company." 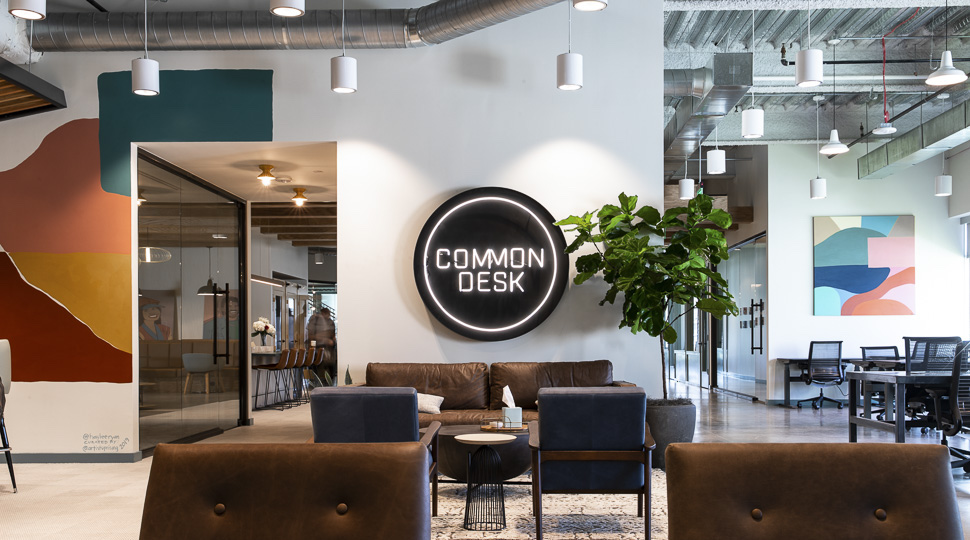 Change is coming to the coworking and flexible space world in North Texas. Dallas-based Common Desk announced Tuesday that it has agreed to be acquired by WeWork Inc. in a deal that should close in March.

WeWork said in a statement that the deal is the latest step toward cost-efficient, strategic growth for the New York City-based company. Once the transaction closes, Common Desk will operate under the name “Common Desk, a WeWork Company,” the companies say.

Common Desk was founded in 2012 in Dallas by CEO Nick Clark. It has grown its network to serve 4,000 customers at a total of 23 locations across 13 cities in Texas and North Carolina.

“Similar to WeWork, Common Desk is a company built on the concept of bringing people together to have their best day at work,” Clark said in a statement. “With the added support from WeWork, Common Desk will be able to not only leverage WeWork’s decade of experience in member services to improve the experience of our own members but also leverage WeWork’s impressive client roster to further build out our member base.”

In the past decade, Common Desk says it has achieved disciplined growth through strategic management agreements with landlords that have enabled it to achieve strong margins by minimizing capital expenditures. The company says that 19 of its 23 locations are operated under management agreements.

One of the country’s ‘premier boutique flex space providers’

Common Desk says that has helped it become one of the country’s premier boutique flex space providers, with a strong local brand known for well-designed spaces and member experiences. WeWork and Common Desk both strive to create “meaningful communities through member-focused hospitality and the acquisition is expected to enable both brands in expanding best-in-class flex space across markets,” according to the companies.

“With an eye towards partners most aligned with our priorities, Common Desk presented itself as a sophisticated operator with a compelling approach to providing a top notch member experience without sacrificing strong margins or an exceptional product,” WeWork CEO Sandeep Mathrani said in the statement. “On the heels of a strong year for our business, Common Desk’s operational expertise and portfolio of first-class space will further bolster our value proposition as we focus on strategic growth.”

The deal is the first acquisition by WeWork as a public company under Mathrani, according to Bloomberg. Mathrani replaced WeWork’s embattled founder Adam Neumann, who was ousted in 2019 as CEO after the company suffered large financial losses and Neumann’s business model and management style came under heavy criticism, according to the website Lexology.

Common Desk has established itself among the elite of flexible service providers in North Texas, serving thousands of professionals since 2012 across a network of flexible office locations. Its coworking spaces consist of a thriving community of freelancers, small businesses, fast-growing tech companies, and enterprise businesses, according to the release.

Its brand portfolio also includes Fiction Coffee, which has three locations in Dallas and one in Houston.

Founded in 2010, WeWork says it has sought to create environments in which people and companies come together and do their best work. It says it has become a leading global flexible space provider that is committed to delivering technology-driven turnkey solutions, flexible spaces, and community experiences.

Clark: ‘An active future for coworking” in North Texas

In an interview earlier this month with Dallas Innovates, Clark forecast what he sees as an active future for coworking and flex space in North Texas.

“I think we’re going to see a heavier push into the suburbs, as more and more people through 2020 and 2021 have gotten used to the convenience of working from home,” he said. “But you’re going to see more and more people searching for office space that is closer to home, and basically just saying, ‘Hey, look, we’re tired of a 20-30 minute commute.'”

“I wouldn’t be surprised to see more companies choosing to either go with a hub-and-spoke model, even within the Metroplex, meaning they have one larger corporate office that might be closer to the city center and CBD district,” Clark added.

He foresees a number of locations spread throughout the city, whether it is with Common Desk or with another space provider. He also sees the coworking and flex space industry as an important piece in helping businesses return from the chaos of the pandemic and the turbulence it created—not only in work environments but in attracting and maintaining a strong workforce.

“I have, as well as I think a lot of people have, a nice home office setup, and so the need for getting into the office is much more geared towards collaborations, meeting time, getting face-to-face time with people,” Clark told Dallas Innovates. “We all know that after going through the great resignation of last year—I think there’s a lot of companies still struggling with that going into this year—it’s becoming more and more important for companies to have a very strong culture.”