CBRE has released the first installment in its multipart "Food In Demand" series, which shows millennials are the main ingredient for the future of food and beverage entrepreneurs and retail property owners.

Check the map to see food spending in Dallas-Fort Worth and its suburbs.

Restaurants will become even more important as neighborhood gathering places near the city center. [Photo: monkeybusinessimages via iStock]

The way to turn a trend into an opportunity for restaurateurs and retail property owners may be through the stomachs of a generation of North Texans.

A new CBRE analysis of U.S. consumer spending and demographic patterns shows that major changes are in the offing for food and beverage purveyors and the real estate where they operate in metropolitans such as Dallas-Fort Worth. “Food in Demand: Consumers” is the first installment of CBRE’s series that looks at the food and beverage sector.

In the report, CBRE concluded that a greater push for conveniently prepared foods, a growing millennial influence, and the emergence of inner-ring suburbs have pushed the food and beverage sector to emerge as the real estate industry’s hottest market. Consumers, especially millennials, want to spend less time cooking and eating, which likely will lead grocers to begin offering more prepared foods.

That’s good news for Dallas-Fort Worth, which ranked as the third highest-rated region for where millennials want to live, according to a recent study by research groups Langston Co. and Centiment.

Here are other conclusions from the CBRE report:

How we eat and drink will evolve rapidly because of demographic shifts, economic factors, and automation, CBRE noted.

“The food and beverage category claims nearly 25 percent of retail sales in the U.S., and few other sectors have expanded their presence in shopping centers as quickly as restaurants and grocery stores,” Melina Cordero, CBRE global head of retail research, said in a statement. “But this sector is just as susceptible as others to sweeping demographic changes, which we’ll see influence real estate through formats such as grocery-restaurant combinations, more kitchen-only outlets and delivery services.” 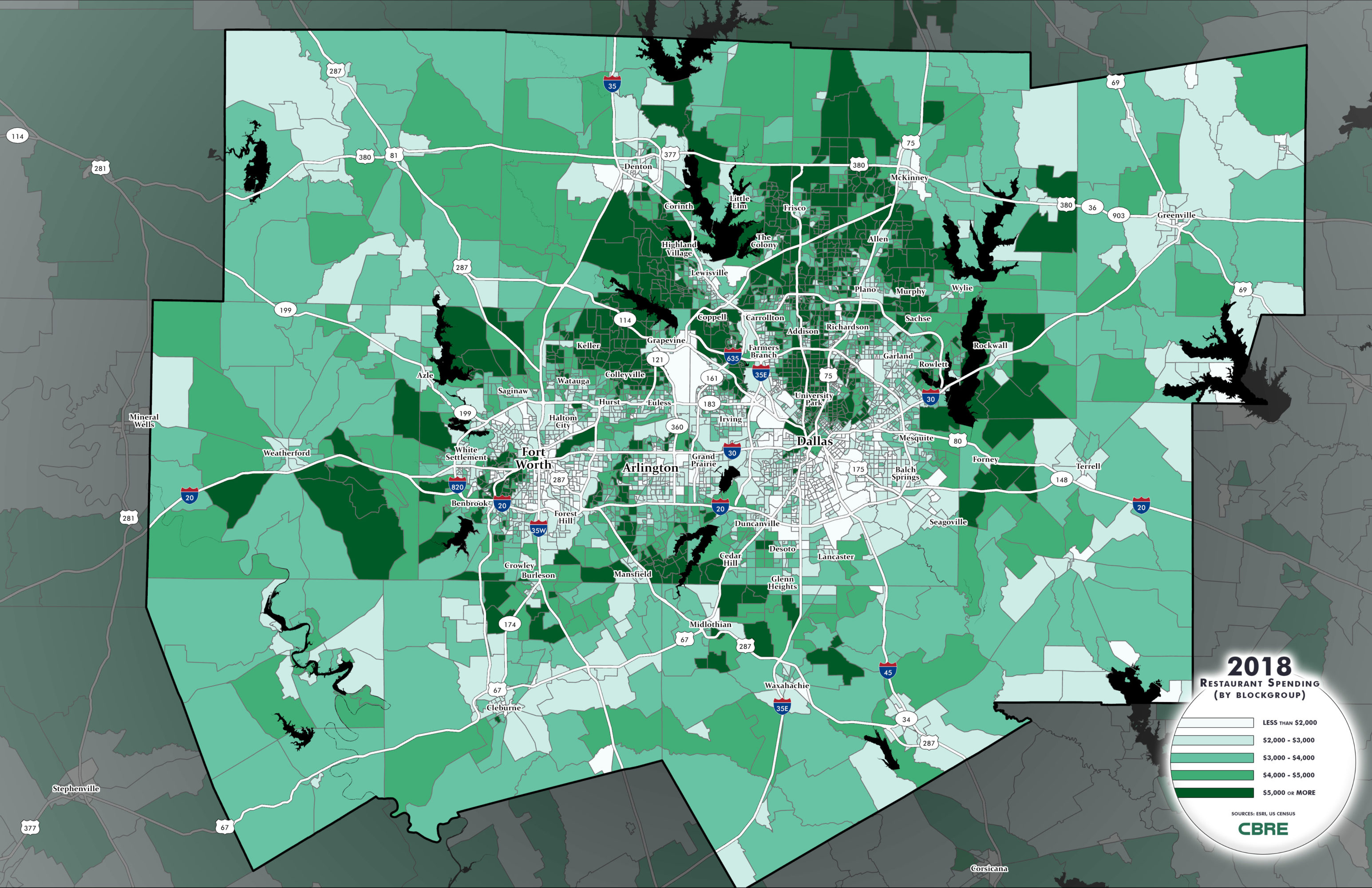 What the future may hold in store

Looking at past and present data, the report also offers several predictions about the near-term outlook for the U.S. restaurant and grocery industries and their potential real estate implications.

A lot of densification is happening in inner-ring suburbs near the urban core in cities such as Dallas, making restaurants, bars, and grocery stores optimal anchors for mixed-use developments in those neighborhoods. They’ll likely become “gathering points” for both residents and employees. Click on the map above to see restaurant spending in Dallas-Fort Worth and its suburbs.

An example of that effect is The Union mixed-used development at the edge of downtown Dallas that includes a full-size Tom Thumb grocery store on its first floor and a mix of restaurants on the property.

Due to the locations of the inner-ring suburbs, there will be a dual benefit of higher food and beverage spending by suburban households and a higher patronage by suburb dwellers commuting into metro areas for work. Many first-ring suburbs are in the early stages of densification, and few of them have the high lease-rates typically associated with urban cores.

And, while suburban households are often families, the percentage of single-person U.S. households rose to 28 percent last year, up from 17 percent in 1969. That combined with a rise in dual-income households means people have less time to prepare, cook, and clean up meals, leading to more demand for prepared foods at grocery stores, delivery from restaurants, and other time-saving conveniences.

CBRE said that spending in restaurants and grocery stores will outpace other soft-goods categories for the next five years. The category’s share of total U.S. retail sales grew to 24.3 percent in the past decade from 22.7 percent in the eight years before the recession, according to Commerce Department data.

The food and beverage category has seen lower e-commerce penetration than most other sectors. That’s led to restaurants, bars, and grocery stores taking a growing share of retail real estate. Some restaurants are even adding kitchen-only locations aimed at delivery and carryout customers only.

According to the International Council of Shopping Centers, since 2007, U.S. mall square footage dedicated to restaurants (excluding food courts) rose by 18 percent to 43 million square feet. The sector’s expansion should continue for several years, but at a more measured pace than in recent years, CBRE forecasted.

Conversely, baby boomers—generally people born between 1946 and 1964—are likely to spend less as they move into their retirement years.

In order to craft menus and gain prime locations, retailers and retail-center owners need to analyze and understand their customer base, including who’s coming in. Often, this can be done through location-analytics technology.

“Restauranteurs and grocers must stay abreast of a lot of constantly changing factors, but consumer preferences and spending habits are among the most important,” David Orkin, an executive vice president leading CBRE’s restaurant practice in the Americas, said in a statement. “We see consumer preferences influencing many facets of retail real estate, including store location; kitchen-only locations to support delivery services; store design to accommodate delivery pickup or prepackaged meals; and different store layouts to incorporate automated ordering and self service.”