Welcome: The State of Innovation in Dallas-Fort Worth

A few years ago, Quincy Preston, publisher at D Magazine Partners for the Dallas Regional Chamber Publications, was talking to the head of a major commercial real estate firm about startups, entrepreneurs, and innovation in Dallas. She told him that Dallas-Fort Worth’s stories of collaboration and invention needed to be shared.

“We don’t do innovation in Dallas,” the real estate executive responded. “That’s like putting lipstick on a pig.”

Preston was stunned. If an industry leader believed that to be the case, then Dallas-Fort Worth had a problem. “As God as my witness, this perception is going to change,” she told him. “Because it’s just not true. That’s not the Dallas-Fort Worth I know. It is happening now, and we’re going to prove it.”

A collaboration of the Dallas Regional Chamber and D Magazine Partners, Dallas Innovates is an online media platform promoting the region as a hub of innovation. We’ll bring you the stories in all of innovation’s forms, including social, invention, creative, enterprise, startups, and education. It’s important that the stories we tell, the people we showcase, and the technology we reference are all a reflection of what makes Dallas-Fort Worth so special. “While many people know the innovation story here in Dallas-Fort Worth, others across the country don’t know all the great things that are coming out,” says Duane Dankesreiter. “We haven’t done a great job of telling that story in the past.”

Dankesreiter is the senior vice president of research and innovation at the Dallas Regional Chamber. Three years ago, Dankesreiter, Preston, and Jeremy Vickers, who at the time was the vice president of innovation at the Chamber, were discussing how to share these stories. “Chambers do messaging really well,” Dankesreiter says. “We spend a lot of time talking with companies. Dallas Innovates was a good fit. We realized it was something we could put the resources behind, get people together, and make happen.”

It makes sense for Dallas-Fort Worth to be seen as a hub of innovation — it’s at our core. “The information age started here with Texas Instruments and their invention of the integrated circuit,” Dankesreiter says. “And we’ve had company after company creating things that are driving the global economy.”

Don’t believe us? Keep reading. We’ll not only bring you the stories of the people doing innovation here, but we’ve also started a series called the History of Innovation to better inform you of where we come from and who we are. We’ll dive into topics, such as the region’s mentality of “business as mutual,” a term Preston first heard from Mina Chang, CEO of Linking the World. “I see us here working together better than what I see in other geographies,” Preston says of our region’s aptitude toward cross-pollination. “I think we have that sort of collaboration and mutual support in spades here — that’s a big part of our secret sauce.”

We believe our goals for Dallas Innovates are reasonable (if not a little ambitious): we want to see the region appear on a global top 10 list for innovation. We want our stories shared. We want to act as a catalyst and amplify the great work already being done. We want to attract talent that will continue to grow, create, and spur innovation in the region.

And we want to make a difference. 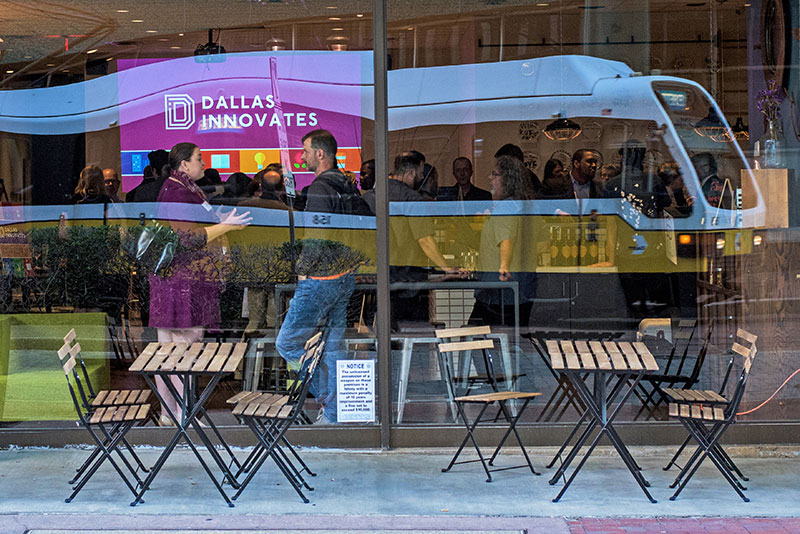 We hosted a meeting earlier this year with our contributors, writers, advisers, and sponsors at Cafe Momentum. Photo by Michael Samples.

Dallas Innovates will build and connect the already vibrant and strong innovation community through this website, a daily e-newsletter, events, and online social engagement. We’ll deliver news about area innovators and provide a voice for technologists, creators, idea-makers, and entrepreneurs as the region gains critical mass. The site will be updated regularly with stories from our staff, our sponsors, our voices, and our advisers. With this incredible group of nearly 100 people, we’ll cover various sectors, geographies, and ideologies.

Have an idea? Let us know.

The State of Innovation in Dallas-Fort Worth

Often, when talking about the idea for Dallas Innovates, we were asked if we truly believe there is enough content in innovation in Dallas-Fort Worth to run a daily website. The answer is, unequivocally, yes.

Want examples? Take a look at this excerpt from Patrick Kobler’s story about our state of education:

“Students from around the world come to DFW for a first-class education from schools that include the University of North Texas, UT Dallas, and UT Arlington, which are among Texas’ seven “emerging research” universities; Southern Methodist University, whose Cox Executive MBA program is ranked No. 3 in the world; and UT Southwestern Medical Center, which is one the nation’s best universities in biology and biochemistry research.

Or read about social innovation from staff writer Tara Nieuwesteeg:

“In 2015, we saw results from things like the Ground Floor at United Way, the D3 Institute at Communities Foundation, and the work that Commit is doing,” Nicole Small, CEO of the Lyda Hill Foundation, says. “These organizations represent a wide range of thinking, from innovative startups to new ways of working together to solve problems. Social innovation is about the willingness to take risks in how organizations think about solving big issues.”

One of the biggest things to happen in 2015 in relation to innovation was the opening of the United States Patent Office. Here’s more from staff writer Dan Koller’s piece about the state of invention innovation:

“’Many cities wanted a regional office, and you have one,’ USPTO director Michelle Lee told the crowd that filled the Perot Museum of Nature and Science lobby for a celebratory gala on November 9. ‘So take advantage of it, use it, and make it the busiest office in the country.’

If the Texas Regional Office, as the Dallas location is officially known, handled patent applications only from Texans, it would have the potential to be among the nation’s busiest. The USPTO granted 10,691 patents to Texas inventors last year, second only to California’s 43,679.”

Then there’s this from Kobler’s piece about the state of startups:

“According to the 2015 Kauffman Index: Startup Activity, DFW ranks 15 out of 40 metros for startup activity. The report, commissioned by the Kauffman Foundation, takes into consideration factors such as the “rate of new entrepreneurs,” and “startup density,” or the number of startups per 100,000 people, when researching and ranking cities.

‘The number of quality startups has skyrocketed in the last few years,’ Trey Bowles says. ‘The resources for the early stage entrepreneurial community have grown as well.’”

And this from Koller’s piece about the state of enterprise:

“Whether you are reading this story on a phone, a tablet, a laptop, or a desktop computer, that very act can be traced back to the ingenuity of Jack Kilby. In the late 1950s, while working as an engineer at Texas Instruments in Dallas, Kilby developed the integrated circuit, or microchip.

‘If you think about the modern electronics industry, anything from cellphones to the electronics in your car, none of that would have been possible without the invention of the integrated circuit,’ says Art George, an editorial adviser to Dallas Innovates who recently retired from a 30-year career at TI. ‘It has spawned an incredible legacy.’”

We’re also seeing the impact that transplants are having on our region. Take this example from Nieuwesteeg’s piece about the state of creative innovation:

“As Dallas grows and evolves, Clyde Valentín is optimistic that the arts community will continue to flourish in coming years. ‘In cities like Dallas, the cost of living is different than in a place like Brooklyn, so what we’re seeing is a more interesting creative development in these mid-size cities,’ Valentín, a Brooklyn native, says. ‘We’ll arguably be a leader as this decade emerges.’” 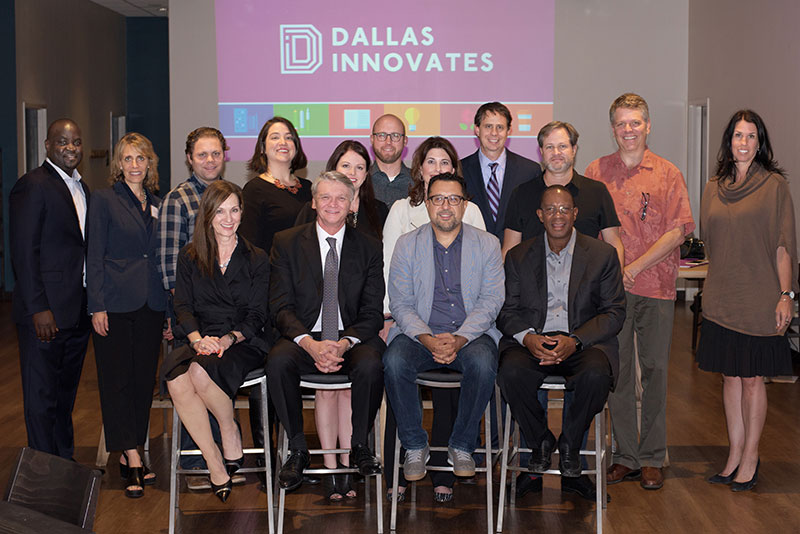 So, when we’re asked if we really think there’s enough content to have a daily site about innovation, we chuckle. Then we head back to our office to edit yet another story, because you, the innovators, are busy. And you’re keeping us busy.

For the past few months, as we’ve prepped for launch, Dankesreiter has been asking people he meets who the Elon Musk of the North Texas area is. Who is that visionary who is not just thinking about what the world will be like in 20 years, but actually working toward making their innovative ideas a reality? No one knows, but Dankesreiter believes the person is here.

“Maybe we’re supporting that person as they’re coming up through a local university or moving to the Entrepreneurial Center. Or maybe they’re working out of their garage or developing patentable technology at a corporate innovation center. We haven’t seen that person yet, but we look forward to finding them and telling their story.”

Join us as we find and tell these stories. And then spread the word.