SMU's Arts Entrepreneurship Program has won a major national innovation award for pursuing its North Star mission: "to end the starving artist stereotype." How well are they succeeding? One recent graduate's startup just had a valuation of over $50 million.

Jim Hart speaks with SMU students about the guest speakers they were about to encounter, and how each would speak about making a living in the arts. "We seek to engage students with actively working creative entrepreneurs," Hart says. "It's one thing for their professor to say something is so. When external guest speakers say the same, their learning is reinforced." [Photo: Kim Leeson]

When college kids say “I want to be an artist,” their parents often imagine decades of struggle in a lonely hovel, with only paint-spattered shirts to show for it. But a professor at SMU aims to change that by teaching artists to be entrepreneurs. One of his graduates co-founded a startup valued at more than $50 million—and the program the professor leads has now won its fourth national award.

James Hart, director of Arts Entrepreneurship at SMU’s Meadows School of the Arts, teaches a course in “Creative Entrepreneurship & Attracting Capital.” The United States Association for Small Business and Entrepreneurship (USASBE) honored it last month with its Excellence in Pedagogical Innovation Award, which celebrates innovation in entrepreneurial education. The USASBE’s annual event is the largest private entrepreneurship education conference in the U.S. 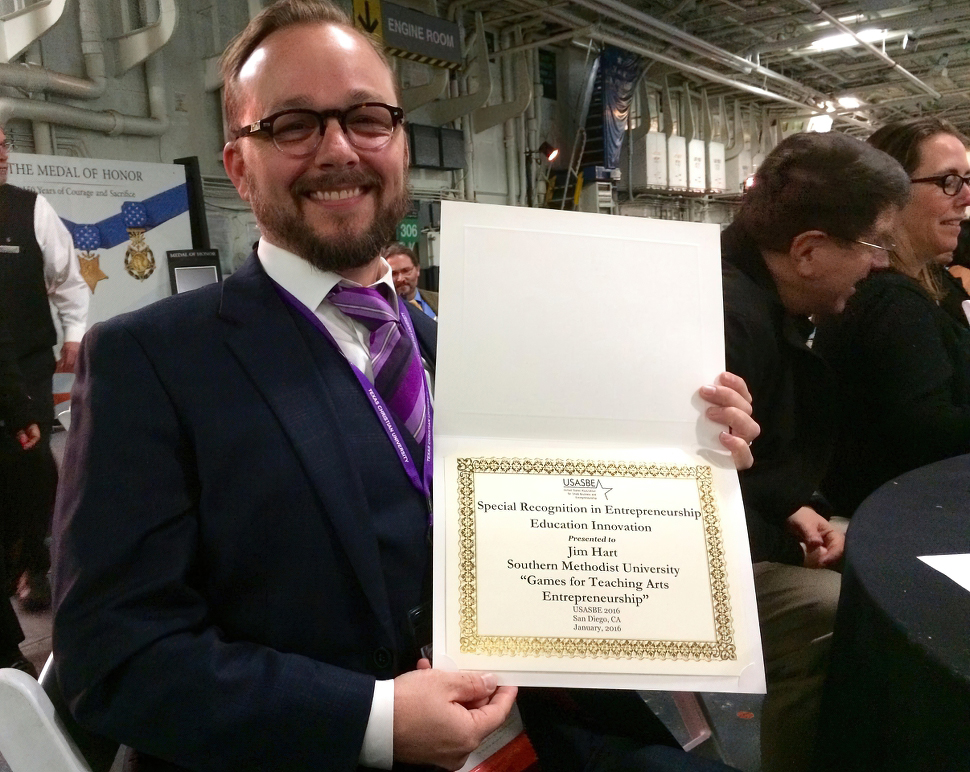 Hart winning a previous award at the USASBE conference in 2016.

The winning course is part of a Creative Entrepreneurship program taught by Hart, which he calls “a new way of teaching entrepreneurship.”

“We’re an unconventional program that exclusively exists to increase the likelihood of our artists and creatives making a living from their artistry, imaginations, and creativity,” Hart told Dallas Innovates. “Our North Star goal is to end the starving artist stereotype.”

The USASBE has taken note by giving Hart’s program three awards in the last six years.

“Jim Hart’s course at SMU is truly innovative and interesting and gets better over time,” said Judi Eyles, program awards chair for USASBE 2022, in a statement. “The judges were impressed that the course content has been open-sourced for others to replicate, making this an excellent model of pedagogical innovation.”

Hart introduces his exercise “Have a Classmate Tell your Story” at last month’s USASBE conference.

Every founder in town masters the elevator pitch—how to impress someone in minutes with your story, your idea, and your investment-worthy future.

It’s a sales pitch. A business pitch. And Hart teaches artists how to do it.

At the USASBE conference in the photo above, Hart explains his course exercise, “Have a Classmate Tell Your Story.” He gets student A to tell student B a story about the milestone moments in their lives. Then student B stands before the class and tells A’s story.

“Each person in class goes through this process,” Hart says. “At the end, I share that one can craft their personal elevator pitch, utilizing the milestone moments people find interesting and dynamic. Students are urged to remember their pitch so in social situations, like when networking, they can rattle off their stories without effort.”

“Isn’t that half the game in networking—have others take note and for you to be remembered by them?” he added.

Reducing risk by creating with others in mind

Hart asks educators from around the world to raise their hands during his experiential exercise “Persona Ideation & 3 Ideas” at the recent USASBE conference.

Another Hart exercise is how to reduce risk by creating what people are actually looking for.

Sure, artist entrepreneurs can simply create what they think is awesome and hope they can find people who agree. But that’s “a high-risk approach,” Hart says.

Instead, his experiential exercise “Persona Ideation & 3 Ideas” gets student A to interview B about their passions, pain points, what they spend their money on, and more. Then student A comes up with three conceptual ideas and pitches them to student B.

“I’ve guided others through this exercise in states and countries around the world and the results are always the same,” Hart told us. Typically, 97% of the resulting ideas are either “liked” or “passionately liked.” Nearly half of the ideas—47%—are passionately liked. Only 3% are disliked.

That exercise teaches artist entrepreneurs the value of seeking what people want and need, and setting their talents to meeting those needs creatively.

“Students are urged to create with another in mind—not a demographic, but a persona—a living, breathing person with a pulse and name,” Hart said. “Then they are to find 10 other people like the person they created for and assess if the results are the same as the first person. Ideally, the entrepreneur interviews 50 or more. Patterns will likely emerge and their risk will be reduced.”

Students range from dancers to filmmakers to ad agency hopefuls

“Generally, students in our arts entrepreneurship courses think of themselves as being or potentially being entrepreneurs and intrepreneurs,” Hart told us. “Some are just curious, but others have active ventures at this time in a wide array of disciplines, including non-arts related.”

Others plan to found companies later. Some didn’t think of themselves as entrepreneurs while at SMU, but have gone on to be entrepreneurs years down the line. “This latter note is common,” Hart says.

One of his most successful graduates to date is Tyler Kowalske, the co-founder and CMO of two companies— Outpost Brands, a product and brand development startup, and Nectris Labs, a CBD extract startup. A recent Series A fund raise through an outside venture group recently valued Outpost at $52.5 million, the company’s COO confirmed.

Hart literally wrote the book on this 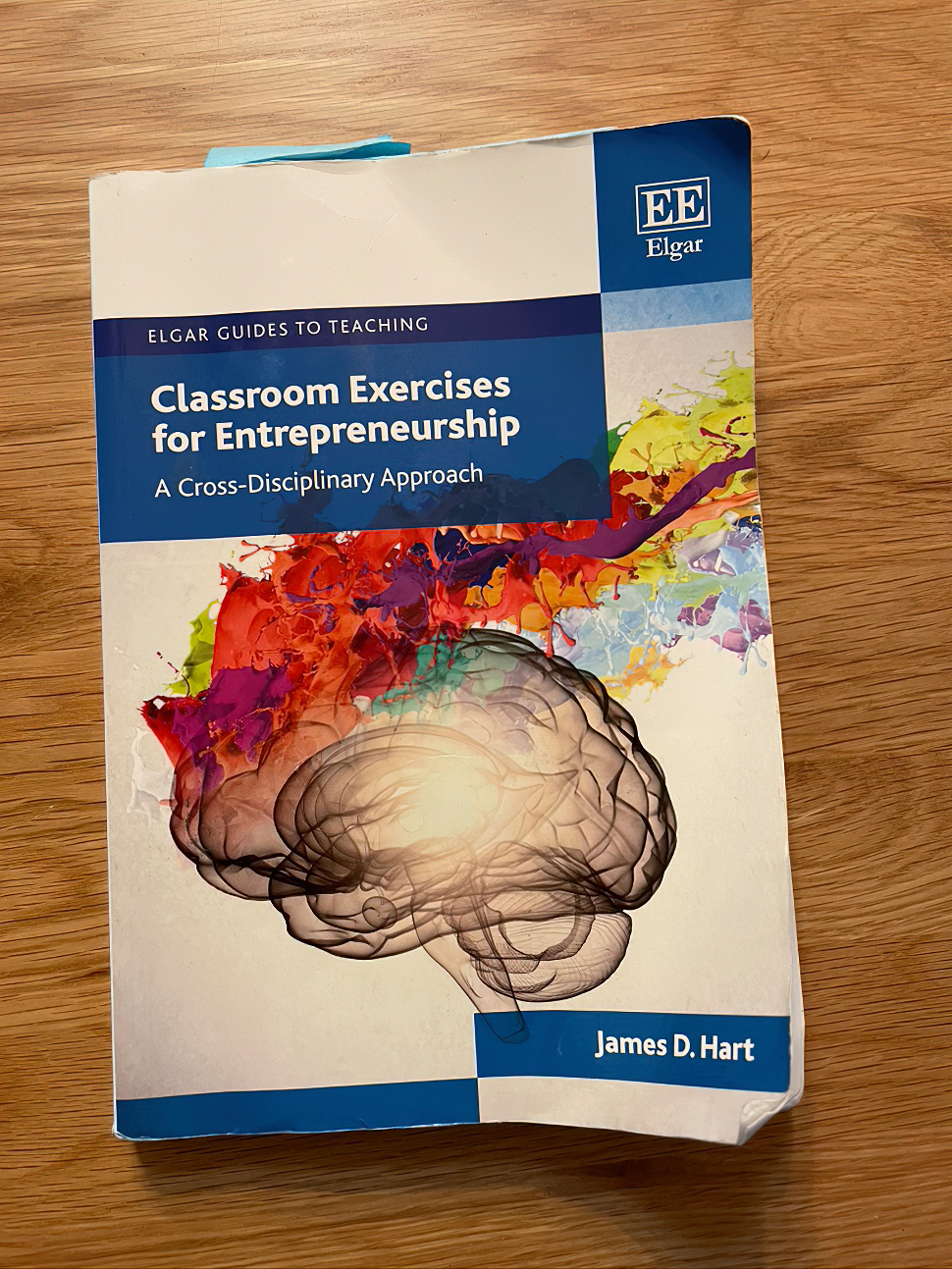 Hart’s book is an “open source” work used by educators around the world.

Hart doesn’t just teach these and other exercises—he wrote the book on them.

“Classroom Exercises for Entrepreneurship: A Cross-disciplinary Approach” is used by educators across the U.S. and around the world, he says. In the book, he outlines 65 experiential exercises for students—games, simulations, demonstrations, and projects.

“Experiential learning is important in the entrepreneurship classroom, as entrepreneurship is an experiential process,” he said. “One must do it to know it. Students can draw upon their experiences in the future when creating organizations, or integrate their knowledge into existing ventures.”

“The exercises have received several awards and [been] presented in a host of books. I created them for other educators to adopt,” he added.

The USASBE awards process is rigorous. The latest one involved a video presentation, a thick nomination packet, judging performed by a blind peer review, then a final live round of judging at the conference in January, where Hart fielded questions about his courses.

“SMU has been a distinct leader in arts entrepreneurship for years, and their efforts have garnered interest from institutions and educators around the world who are passionate about arts entrepreneurship,” said Julienne Shields, CEO of USASBE, in a statement. “Their thought-leadership and pedagogical acumen empower creatives of all types to be entrepreneurial in their work.”