Executives in Action merged with online volunteer matching platform Catchafire to keep up with nonprofit requests.

Executives in Action officially has relinquished its role as North Texas’ volunteering cupid.

Akin to a blind date, the Dallas-based nonprofit founded by Chris and Ashlee Kleinert matched up professionals who were retired or in between jobs with nonprofits needing their expertise for development projects.

In the spring, EIA began a transition that wrapped up in August to merge with Catchafire, an online skills-based volunteer platform headquartered in New York.

“We are the dinosaur, and they are the fresh, young thing,” Ashlee Kleinert said of Catchafire.

EIA began as a way to help both out-of-work executives keep their skills fresh and local nonprofits, which faced plummeting donations in the wake of the 2008 recession.

EIA began as a way to help both out-of-work executives keep their skills fresh and local nonprofits, which faced plummeting donations in the wake of the 2008 recession.

“We would offer a stipend [to executives] that was not meant to replace their salary. It was just to help pay some bills — keep the electricity on, pay a tuition payment, or mortgage payment,” Ashlee Kleinert said. 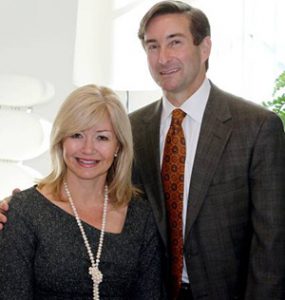 She thought the need would be temporary, but as the years passed and the economy mended, nonprofit requests continued to grow.

From the Dallas Children’s Theater to Heroes On The Water, hundreds of North Texas nonprofits and professionals have benefited from partnerships cultivated by EIA.

The retired Federal Reserve Bank of Dallas executive teamed with New Friends New Life in 2014 to craft a concept plan for a new men’s advocacy group. The work opened his eyes to an issue he didn’t even know existed in his own city: sex trafficking.

Now, he serves as community engagement director at the nonprofit, which helps formerly trafficked girls and sexually exploited women, and is continuing work to develop the advocacy group.

“Where I’m sitting today would not have happened without EIA. I wouldn’t have learned all I’m learning and be able to do some pretty special work,” Morse said.

To keep making a meaningful impact, Ashlee Kleinert estimates EIA would have to triple its staff and possibly turn away some of those asking for help.

“The demand for the projects was so great, that it was hard for us with the infrastructure to keep up with it,” Ashlee Kleinert said.

That’s why when the Kleinerts heard about Catchafire, they knew it’d be time to make a change.

“It was really hard to continue to try to fundraise and take people’s money in good faith knowing there’s another way to do this and do it more efficiently,” Ashlee Kleinert said.

With Catchafire the connections all happen virtually.

At EIA, professionals found their way to the nonprofit mostly by word of mouth. The partnerships with nonprofits happened through phone and email conversations.

With Catchafire the connections all happen virtually. Professionals can search and apply to projects aligned with their passion areas and, for a fee, nonprofits can post projects via the online platform.

“Nonprofit organizations are generally very resource constrained — not just financially, but in terms of being able to find and access talent,” Catchafire founder and CEO Rachael Chong said.

Chong created the platform to bring a faster, more efficient solution to the process of volunteering.

Ashlee Kleinert worried cutting out some of the human interaction in connecting professionals and nonprofits might not be received well. So far, she hasn’t heard any complaints.

Dallas-based The Senior Source, which focuses its services on helping older adults, had been a long time user of EIA and an early adopter of the Catchafire platform.

To help with the transition Ashlee Kleinert said EIA pledged to pay a one-year Catchafire membership for 100 nonprofits.

“For us, I don’t think we’ve felt the experience has been diminished in any way because we are talking to someone on a phone or on a video conference versus in person,” Senior Source president and CEO Cortney Nicolato said.

She said the nonprofit has already posted multiple projects on Catchafire.

Chong has been impressed with the reception Catchafire has received in the area.

Since the merge in April, 193 North Texas organizations have registered for the online platform and 3,700 hours of work have been donated.

To help with the transition Ashlee Kleinert said EIA pledged to pay a one-year Catchafire membership for 100 nonprofits.

“That was another way to kind of soften what we thought might be a blow,” she said.

Since it’s a digital platform that can be used all over the world, Catchafire gives North Texas nonprofits access to a larger number of professionals.

Acquiring that outside expertise can be very valuable, Nicolato said. The Senior Source has now utilized professionals from all over the nation for its projects.

Catchafire hopes to reach more than 1,000 area nonprofits by the middle of next year. It’s also in talks with Dallas-based companies on ways the digital platform could be used to find and track corporate volunteer hours.

“We’ve certainly found that companies are interested in a solution like Catchafire, which provides their employees with opportunities to give their time and their skills to local nonprofits,” Chong said.