7-Eleven’s Jesus Delgado-Jenkins has been named one of Fast Company‘s “Most Creative People in Business,” for 2017. 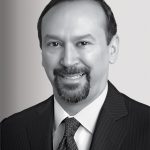 The business publication compiles the annual list to showcase 100 leaders from around the world who are “shaping the future of business in creative ways.”

Delgado-Jenkins, chief merchandising officer for the Irving-based convenience store chain, landed at No. 21 on the list for his helm over the pilot delivery program that is “making Slurpees fly.”

7-Eleven made history last summer by partnering with Nevada startup Flirtey to make the first commercial drone delivery to a U.S. home. By the end of 2016, it had made more than 70 such deliveries.

Slurpees soaring through the air and delivered to your doorstep via drone didn’t seem like a far-fetched concept for Delgado-Jenkins.

He said in the future, he sees the possibility to use drones more regularly with daily deliveries.

During his tenure at 7-Eleven, Delgado-Jenkins has started an innovation group at the 90-year-old company and brought new private-brand and prepared food offerings, Fast Company noted.

See what other leaders made the “Most Creative” list here.