The Foundry District will feature a “yarnbom” installation on a building and new ground murals, while WestBend has added 12 new public artworks and will host the #WestBend Snap & Seek event.

The "LOVE" sculpture is on display at the WestBend development in Fort Worth. [Photo courtesy of Trademark Property Co.]

The arts are taking center stage at two Fort Worth real estate developments as sculptures, murals, and photography get new places to shine in the North Texas sun.

Both The Foundry District and the WestBend development have major art events planned that will offer a variety of media for visitors to enjoy.

The Foundry District’s developer, M2G Ventures, is pushing forward with its plans to create a twist on real estate by telling a story about the arts and culture through collaborations and its increasing number of entrepreneurial tenants.

The Foundry is a part of the Fort Worth Cultural District and is adjacent to 7th Street and the Museum District. It is a recently rehabbed six-acre industrial development and is home to a mix of local retailers and restaurants, modern creative offices, and unique, alternative event venues. 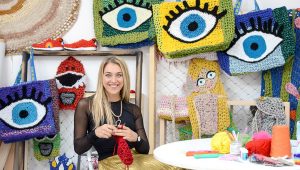 Artist London Kaye with some of her works. [Photo Courtesy M2G Ventures]

“Art inspires people,” M2G Co-president Jessica Miller Worman told Dallas Innovates. “We wanted The Foundry District to be a place where people come to work every day and think I can tackle my biggest goal, or love going to an event there because it makes them feel like they have been transported out of their daily life.”

Worman is partners in M2G Ventures with her sister, Susan Miller Gruppi.

On Aug. 19, national fiber artist London Kaye will be in Fort Worth to “yarnbomb” a large 20-foot yarn installation onto one of the buildings in the district. The installation will feature family friendly events such as DJs, food trucks, and a pop-up gallery from 6 to 10 p.m. at 200 Carroll St.

Inspiration for the yarn installation comes from an idea of expanding one’s freedom, according to a release.

Kaye, a Brooklyn, New York-based street artist, has worked with such brands as the Gap, Starbucks, and others.

She uses crochet techniques to create art pieces out of yarn that have attracted attention around the world.

Katie Murray has taken the art from the Foundry District’s walls and placed it on the sidewalks with her new ground murals that are featured throughout the district. [Photo courtesy of M2G Ventures]

Also in The Foundry District, lead curator and muralist Katie Murray has taken the art approach that adorn’s the area’s walls and placed it on the sidewalks with her new ground murals that are featured throughout the development. 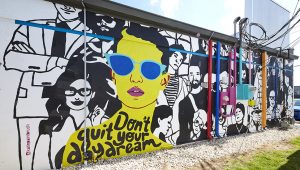 One of the colorful murals in The Foundry District’s Inspiration Alley. [Photo courtesy of M2G Ventures]

An “artwalk” of the colorful abstract murals will lead visitors to The Foundry on a tour of the artwork throughout the area’s businesses.

The Foundry District is becoming known as a destination for unique curated partnerships through interactive and engaging outdoor art.

“It is all about bringing inspiration to the everyman to the everyday experience,” Miller Worman said. “The Foundry District is pushing the conversation about art and culture through curated re-imagined spaces and a deliberate intention to create one of the most selective collections of our area’s contemporary artists.”

The first collaboration is an ever-evolving outdoor gallery project called Inspiration Alley that kicked off with Murray’s Cowtown mural.

WestBend, a 278,000-square-foot mixed-use development of Trademark Property Co. in Fort Worth’s University District, has added 12 new public artworks to the property and is going to celebrate the additions with a #WestBendLove Snap & Seek event at 7 p.m. July 20, where visitors will be encouraged to take selfies and share them.

“When it comes to retail places today, it’s all about creating experiences.”
Terry Montesi

The new artwork expands the development’s existing public art program, and showcases a variety of style and media by national and local artists, according to a release. Included in the artwork are 10 murals by Dallas-based artist Kyle Steed, a site-specific “LOVE” sculpture by Laura Kimpton, a San Francisco-based artist, and a mural by North Texas artist Lauren Childs.

They join existing works by Dallas-Fort Worth artist Devon Nowlin and a rotating photography exhibit from the Amon Carter Museum of American Art in Fort Worth.

“When it comes to retail places today, it’s all about creating experiences. Carefully curated public art activates a space and makes it unique, all while contributing to the vibe of the neighborhood and the city,” Trademark Property Co. CEO Terry Montesi said. “Most importantly, art is to be enjoyed. We invite our guests to interact with the works and share them with one another, and make them a part of their life. We want WestBend to be an extension of the world-class Fort Worth arts district.” 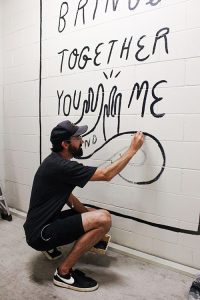 The 10 murals by Steed will mark his Fort Worth debut and will include quotes and references to famous Texans. Steed’s work includes nine murals in the parking garage — consisting of five elevator vestibule works and three small works in stairwells. They include a Willie Nelson quote, and Happy Trails mural on the exit wall, along with a Patsy Cline quote near Drybar, according to the release.

Kimpton’s steel “LOVE” sculpture sends a positive message to WestBend visitors and is in the green space near The Woodhouse Day Spa. It includes hundreds of programmable LED lights that change color at night.

“LOVE” is a part of Kimpton’s Monumental World Series that made its debut the 2009 Burning Man Festival. Since then, the series has had permanent installations at the Apple store in San Francisco’s Union Square and Santa Rosa, California., and in Las Vegas and Reno, Nevada.

According to Trademark, Childs’ first mural, The Little Things, depicts succulents with vibrant color and texture. It is located between Woodhouse Day Spa and CorePower Yoga.

Childs, of Fort Worth, is an advocate for local art and co-founded Fort Works Art. It began as an event-based pop-up organization, but has opened its first permanent gallery space in the Cultural District in Fort Worth.

PHOTOGRAPHS ARE ON DISPLAY IN SIX-MONTH INTERVALS

WestBend is home to a rotating selection of nine, 4-by-6-foot reproductions from the museum’s highly regarded photography collection, thanks to a collaboration with the museum.

The photographs are displayed on backlit film in lightboxes.

The #WestBendLove Snap & Seek event of July 20 will kick off on Level 6, the top floor of the free parking garage behind Tyler’s. #WestBendLove will feature a polaroid scavenger hunt, frozen treats, drinks from HG Sply Co., surprises, and the opportunity to meet the artists in attendance. For more information, visit the website. 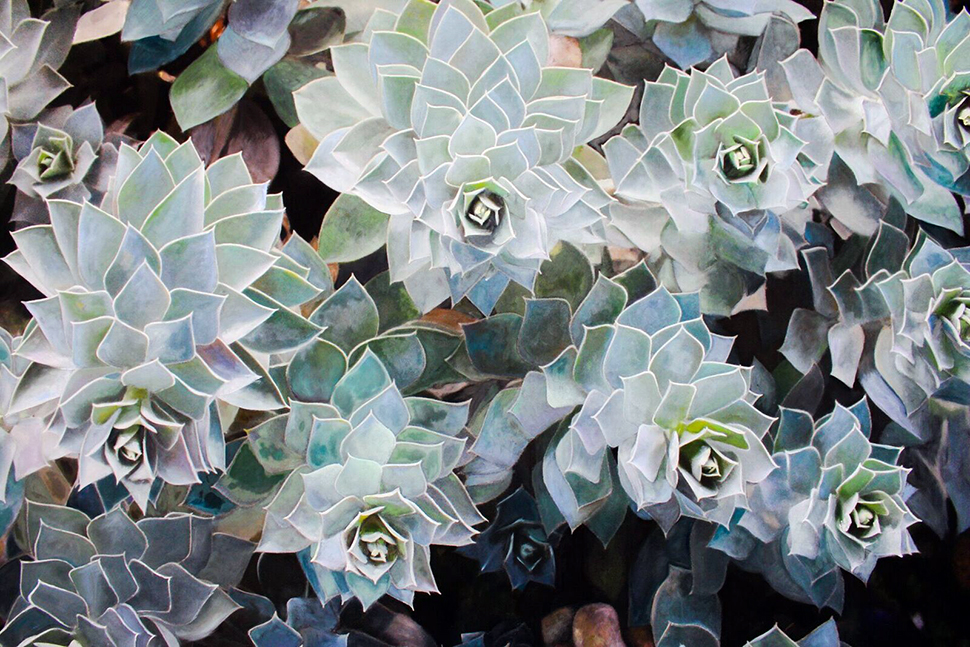 “The Little Things” mural by Fort Worth artist Lauren Childs

Waterside: Creating a ‘Conscious Place’ in Fort Worth