‘The CliffsNotes of the Courthouse’: Fort Worth-Based Tracts and Austin’s Enverus Release TitleNotes

The new property rights solution "distills" deeds, leases, and other court documents from 1,700 words to 40 or less. That can help oil and gas firms and residential developers to quickly and efficiently determine ownership rights—so they can make the deal while others are still wading through data.

We talked with Tracts' co-founder and CEO about his startup—and how it aims to "disrupt title as a whole."

From oil and gas companies buying up land to developers acquiring residential properties, one thing can’t be skipped: getting the title. That can mean sifting through lots of long, impenetrable court records to find needed key data. Now a Fort Worth-based startup has partnered with an Austin company on a “CliffsNotes of the courthouse” solution: TitleNotes. 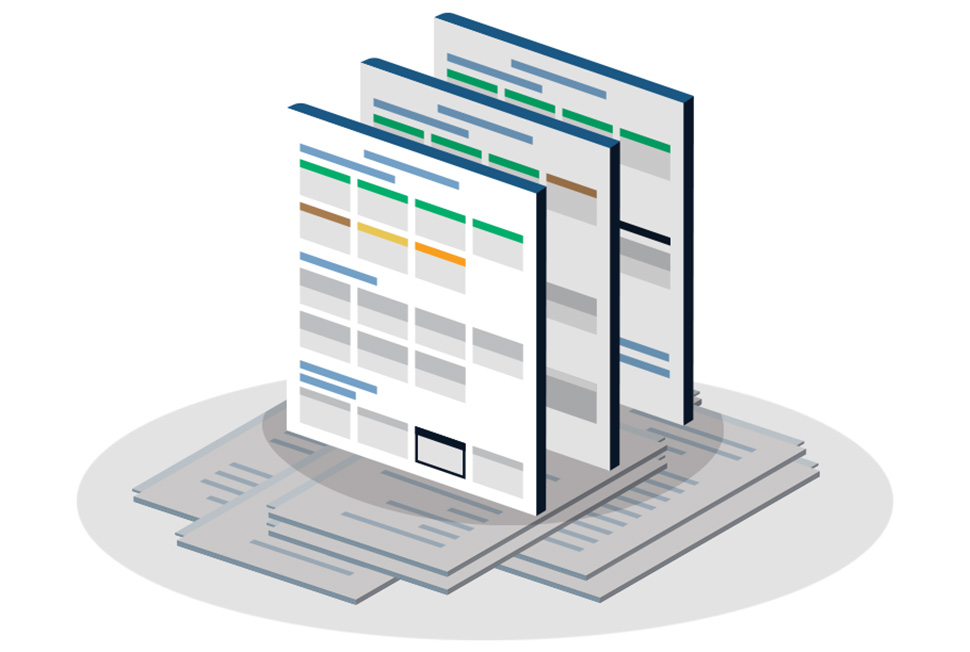 The new tech offering cuts through the noise in county courthouse property documents to provide users with the core information needed to understand the intent of transactions.

“Time kills deals, and we eliminate so much of the time and cost,” Tracts co-founder and CEO Ashley Gilmore told Dallas Innovates.

“Time kills deals, and we eliminate so much of the time and cost.”

“Essentially, every company is competing to find people that own the minerals but they don’t know who owns them,” he said. “So they use things like tax rolls to get an idea of who owns them.”

“They go to those people and say, ‘Hey, I’d love to buy your minerals. And I think they’re worth XX, maybe. I’m not sure if you do own them, but if in fact you do, and you sign this document in 45 days, I will potentially buy it for this price.”

Instead, a company using the Tracts platform can more quickly and easily run the title in advance.

For example, he says: “They show up at the door, and they say: “Here’s a check for $255,000.62. If you sign this deed, you can cash this check today,” Gilmore said. “They can do that because they already know exactly what they own. There’s no debate. It’s a faster close. It’s a faster process.”

‘The CliffsNotes of the courthouse’ 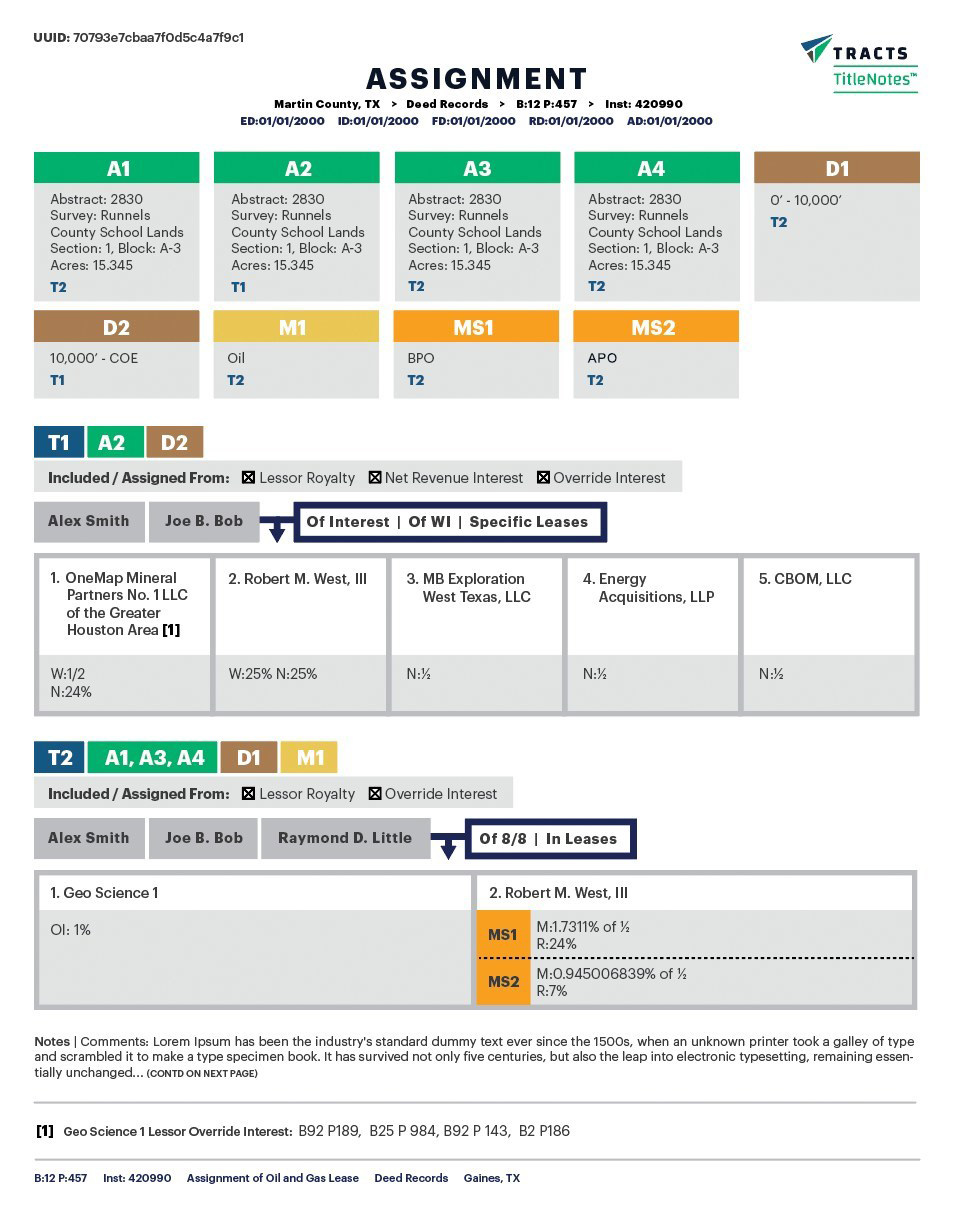 TitleNotes summarizes the information needed to understand the intent of a property-rights transaction. [Image: Tracts]

“TitleNotes are the CliffsNotes of the courthouse,” Gilmore added in a statement. “Pre-processing courthouse data creates various new opportunities beyond reducing the risk involved in the antiquated spreadsheet-centric approach … Enverus customers will now have a measurable advantage over anyone using a standard or digital courthouse.”

TitleNotes directly addresses a land professional challenge of limited time and limited tools for acquisition due diligence. These constraints have previously led to the commonly used “80/20” rule, where only 20% of the courthouse documents containing hopefully 80% of the value was checked.

The new solution from Tracts and Enverus provides asset ownership confirmation faster and more cheaply while reducing asset risk. Rather than receiving pages of data scanned from courthouse books, TitleNotes automatically provides energy companies with data on document parties, areas, mineral types, and depths delivered via email with the additional option of uploading the data into a Tracts account.

Founded Tracts in 2014 while in law school

Gilmore founded Tracts in Houston in 2014 while attending law school and interning for a law firm. “I saw a continuation of a problem that Tracts now solves,” he recalls.

In 2015, he and his co-founder, CTO David Dewey, began working for the company full time. After raising nearly $300,000 from friends and family investors, in 2017 they raised their first formal seed round of just over $1 million through Houston Ventures. A later raise of $1.2 million totaled their current funding at about $2.6 million.

“Tracts solves a huge problem. It automates running title and there’s a whole industry around that,” Gilmore told us. “When you buy a house, you’ve got to run title. Mineral title is far more complicated, and the industry spends somewhere between $2 to $8 billion on that.”

About 18 months ago, Gilmore began working on the idea for TitleNotes by looking at how the industry explores court documents.

“The teams already buy documents from Digital Courthouse and pay people to interpret them,” he said. “Once they’re interpreted, they change them out and run the title. So my idea was, if we created a product that essentially upgraded the courthouse document by giving you the answer—what do the documents say?—That’s ultimately what they want to know. We thought it was a good way to break into the market. It’s a better version of what they’re already buying.”

Relocated to Fort Worth two years ago

Gilmore and Dewey relocated their team from Houston to Fort Worth in January 2020.

“Fort Worth is incredible compared to Houston,” Gilmore says. “It’s like the largest small town in the country that I’ve been to.”

Tracts’ contractors are “like ninjas at using the software’

The company now has 15 full-time employees in the U.S., with an additional set of contractors doing services work each month, including 30 people in an office in India.

Enverus users will be able to access TitleNotes directly through the Enverus Courthouse product. For Tracts customers, TitleNotes are formatted to link directly into the Tracts Platform, connecting the courthouse records and Tracts user accounts.

The contractors “do land work. Title work. They’re like ninjas at using the software,” Gilmore told us.

Gilmore plans to grow his team by another five to 10 people this year. “We’re actively trying to hire engineers. We’re always looking for experienced landmen—that also means landwomen, of course.”

Enverus partnership ‘is one of a kind’

Gilmore calls TitleNotes “a one-of-a-kind product,” and he says the partnership with Austin-based Enverus is one of a kind as well.

“It’s something like a $4 billion-dollar-plus company,” Gilmore said. “And they don’t have any other partnerships in their courthouse product like this. No one else that’s competing in this space has anything remotely close to this product. It’s completely new and innovative. I think a lot of people have tried to duplicate it, but it’s going to be really hard to catch up.”

‘A huge opportunity to really change the game for us’

It’s not just the partnership that has Gilmore excited—it’s the product.

“Titlenotes is a huge opportunity to really change the game for us,” Gilmore said. “Through Enverus we’re getting access to some 10,000 plus customers, which the majority of could be customers of Tracts. As part of the partnership we’ll have direct introductions to the most active clients over the course of the contract.”

Nearly 200 miles down I-35, Enverus is effusive about the partnership as well.

Martin says the on-demand title document interpretation provided by TitleNotes will both speed up and reduce risk for mineral and leasehold acquisition and diligence.

While oil and gas is where Tracts’ current investments and lead investors have been focused, Gilmore is looking beyond that to “title as a whole.”

“We focused on oil and gas because it was something I was familiar with, and we could solve a huge pain point,” Gilmore said. “But Tracts and especially Titlenotes is directly applicable to all—not just energy companies—but also residential.”

“We’re actually looking at some different blockchain technologies to stack with Tracts. In order to solve the bigger title problem as a whole, I think we have one of the only platforms capable of really processing real property transactions.”

“We already work with alternative energy companies like geothermal, battery, wind, solar,” Gilmore noted. “In some states, geothermal is considered a mineral, right? So if you’re extracting geothermal energy, you have to buy the minerals or lease the minerals.”

“With wind and solar, the surface is subservient to the mineral. So if they want to build a big solar farm, they need to know who all the minerals owners are so that they can pre-negotiate drill pad sites—so they’re running all that title.”

Tracts aims to make “running all that title” much easier with TitleNotes—and they plan to run, not walk, toward a title-conquering future of growth.

Quincy Preston and David Kirkpatrick contributed to this report.