A group of North Texas investors made up a major portion of the Series A round.

A company founded by current and former University of Texas at Dallas professors recently received a multimillion-dollar boost in its work to develop non-opioid alternatives to treat pain.

Last week, CerSci Therapeutics closed a nearly $4 million Series A round of investment. More than half the funding came from the Minnesota-based Hiawatha Education Foundation as well as a group of North Texas investors including and represented by Dr. David Genecov, a Dallas craniofacial surgeon.

“[The round] kept getting bigger and bigger, which is a good problem to have,” said CerSci CEO and former UTD senior lecturer Lucas Rodriguez, who started the company in 2015 with professors Greg Dussor and Ted Price.

The most recent funding will be used to push its leading asset, CT-044, closer to human clinical trials.

A STEP IN COMBATTING THE OPIOID EPIDEMIC

The possible new pain treatment, which CerSci acquired last summer, comes at a time when the numbers of people being prescribed and subsequently becoming addicted to opioids is rising.

These painkillers, such as OxyContin and Vicodin, are commonly prescribed for moderate to severe pain. They operate by attaching to opioid receptors in the brain and other areas of the body to block pain signals from traveling to the brain therefore reducing a person’s feeling of pain. While they do reduce pain, their resulting high makes them highly addictive.

In 2016, a Surgeon General report found that 78 people die every day in the U.S. from an opioid overdose.

A 2016 Surgeon General report found that 78 people die every day in the U.S. from an opioid overdose. That number has almost quadrupled since 1999.

More than 240 million prescriptions for opioids were written in 2014. That’s enough to give every American adult a bottle of pills, according to the U.S. Department of Health and Human Services.

The federal government released its national guidelines aimed to reduce use of opioids last year. Health insurance companies such as Aetna have stepped up to fight the crisis, by sending letters to “super-prescribing” doctors urging them to think twice before recommending painkillers.

“Physicians and corporations have created this problem and it’s our responsibility to try and solve it,” said Genecov, who in addition to investing, has joined the CerSci board of directors.

As a doctor, Genecov is on the frontlines of the epidemic seeing the negative effects of drug abuse. In CerSci’s CT-044, he foresees a possible step in the direction of reversing the problem.

“It’s one mode of attack,” Genecov said of CerSci’s leading asset. “There’s plenty out there and I think a lot of them deserve the private sector’s attention to help try and fund some of these more promising approaches.”

Rodriguez is encouraged by efforts reducing the misuse and abuse of opioids, but his team at CerSci wants to go further by offering non-addictive options for patients.

“We have an opportunity to usher in a new generation of medication to treat people in pain,” said CerSci’s Chief Scientific Officer Scott Dax. 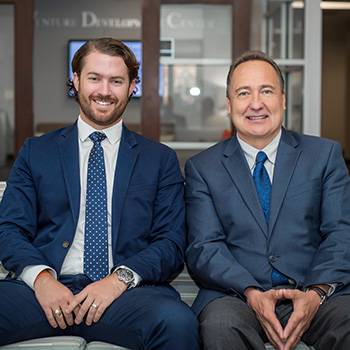 Dax has decades of experience in the pharmaceutical industry including leadership roles with Johnson & Johnson, DuPont-Merck, and Hoffmann-La Roche. He is an inventor on nearly 100 issued patents including the one for CT-044.

Unlike opioids, which essentially mask the feeling of pain, CT-044 “scavenges and neutralizes peroxynitrite in the body preventing the downstream pathways that end up causing pain,” Rodriguez said. Since the drug doesn’t cross into the brain or use opioid receptors, there is not a reward pathway stimulated that could make it prone to addiction.

“This allows for the return to a normal sensation,” Dax said. “We imagine for people this will be a huge advantage. The drug will not be prone to abuse because there will be no high that can be generated because of its mechanism.”

“We have an opportunity to usher in a new generation of medication to treat people in pain.”

Genecov is drawn to the drug’s single-molecule approach.

“It is not going to be hugely expensive to manufacture ultimately and I think it can be used both as a surgical pain reliever as well as a post-operative pain reliever,” Genecov said.

In the next year, CT-044 will go through the Food and Drug Administration’s Investigational New Drug enabling process. Rodriguez expects that to take about 12-15 months putting clinical trials — pending FDA approval — on track by the end of 2018.

CT-044 is just one in a collection of potential non-opioid treatments CerSci is developing. Rodriguez said there could be a number of paths forward, including establishing partnerships with large pharmaceutical companies, all with the end goal of bringing the treatments to the market.

“Regardless of what scenario is in our future, we’d like to make sure first and foremost that our drug makes it to market and is available for the patients who really need it,” he said.