An upcoming block party will showcase the district's potential with food trucks, activities, games, and examples of activated spaces.

Not every office park can be a monument to 21st Century amenities and transit, but the City of Richardson knows that a few small changes have the power to reinvigorate an underserved area, bringing everything from happier workers to tech startups to the city.

That’s why a team from the Richardson Chamber of Commerce, the City of Richardson, nonprofit Better Block Foundation, and others have been working for more than a year to launch an innovation district in the Collins-Arapaho area, known officially as the Collins/Arapaho Transit-Oriented Development (TOD) and Innovation District.

The area, dubbed the ‘Premier Tech Hub of Texas,’ the city reports in its Innovation District Study, contains more than half of the businesses and 20 percent of the jobs (an estimated 19,000 workers) in Richardson.

Because the area has been home to some of the region’s most innovative companies—Collins Radio, Ericsson, Texas Instruments—it became known as a Telecom Corridor.

To reestablish the innovation that once dominated the area, Doug McDonald, AICP Planning Projects Manager for the City of Richardson, says the city is pushing to implement an innovation district complete with improved bike lanes, activated green spaces, building refurbishments, and even potential for a food truck area.

Among the green spaces McDonald hopes to activate is a small waterway that runs through the site known as Duck Creek.

“Duck Creek was one of our opportunities sites…” McDonald says. “It’s similar to what you see in Dallas with the Katy Trail and with Klyde Warren Park. When you monetize open space—green space—people flock to it.”

Duck Creek will be activated during Richardson’s block party to showcase the green space’s potential in the innovation district. [Image: Courtesy City of Richardson]

To showcase the city’s work, a block party will preview the Innovation District on June 13 from 6:30 to 8:30 p.m., and on June 14 from 11 a.m. to 1 p.m. Visitors will be able to learn about upcoming transit activations, enjoy music and food trucks, test out new park and trail ideas, and give input on uses, restaurants, and other spaces in the district.

“We’ll have food trucks out there and a number of activities in games, hopefully giving some of the property owners who back up to the creek some ideas of ways they can actually improve their businesses and really kind of activate their businesses,” McDonald says.

Better Block Foundation’s new project, Better Block in a Box, will provide examples of placemaking items like seating, games, and even a shipping container that folds out for food or drink service.

“It’s as simple as a paintbrush, and letting people go outside and actually paint a bike lane or a crosswalk to make their streets safer,” Nightengale says.

Activating the Innovation District, she says, will be a game-changer for workers in the area, and for companies who are attracted to the district.

“Someone told us that a lot of people who work in that area—just to get exercise, get out of the office— they’ll just kind of walk in the parking lot,” she says. “And we want to create a space that’s more humane and more beautiful and a little bit more of an experience that you would want during your lunchtime break.”

READ NEXT Comeback of the Corridor: The Rousing Revival of Richardson

Better Block Foundation has chosen Duck Creek as the center of its pop-up park, which will be on display during the block party.

“There’s this creek that runs through the back that makes a little magical area within the district as a whole,” Nightengale says. “That was one of those things where, when we found it, we were like, ‘Awesome, this is the thing that we’re going to highlight.'”

Nightengale says Better Block will be building two bridges across the creek to give pedestrians on either side access to the other. In addition, they’re partnering with Texas Tree Foundation to bring out trees to create shade during the party.

The non-profit will also be painting a mural on the ground, “Just to add some color to the area.”

For Nightengale, the goal is simple: “That people have a better place to walk than a parking lot during their lunch break.

“I want to create a space where people can come together, and they can be surrounded by beautiful design and have a more beautiful place to be a part of,” she says.

Transit sits at the heart of the innovation district’s mission. Because the area is serviced by a DART rail, McDonald says he aims to create pedestrian passages that make it safer and easier for commuters to walk to and from work.

The City of Richardson has already taken out two lanes on Alma Road to create designated space for bicycles, and it’s now looking to complete a similar project on Greenville Avenue in the Collins-Arapaho district.

The city says Greenville Avenue is designed for three times the capacity it needs given its current traffic count.

As a result, the city hopes to narrow the roadway and install pedestrian accessibility sites from at-grade crossings to a two-way cycletrack.

“If you take out two lanes and make it safer, we can actually do an at-grade crossing to make it more efficient for people to get from the bus station from the parking to the light rail station,” McDonald says. 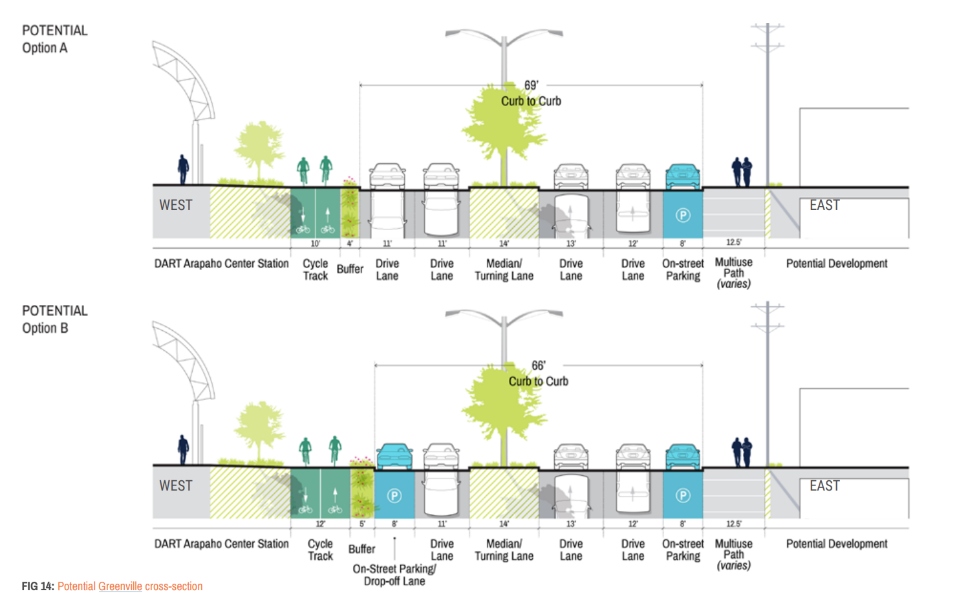 The block party is a short walk away from the Collins at Prospect bus stop. Commuters who take the DART Red Line to the event can disembark at Arapaho Center Station, then take bus route 551 toward LBJ/Skillman Station.

“If they’re really passionate about trails and open space, they can go down and try out our little pop-up trail, or if they’re really into the specific uses that are going to be allowed, they can come and give input on that during the stations,” Nightengale says. “So there’ll be plenty of things for folks to do.”

The Telecom Corridor fills the city limits of Richardson. [Photo by Michael Samples]

Comeback of the Corridor: The Rousing Revival of Richardson

The telecom bust of nearly 20 years ago rattled Richardson. Go there now and you’ll find a city in midst of an awakening built on redevelopment, marketing, perseverance, and a revised real estate toolbox.