"A 'no' always meant 'maybe' to me," says real estate developer Moreno-Lake. That determined nature and an entrepreneurial mindset has led to success in building communities from Oak Cliff to Cedar Hill to Waxahachie.

Editor’s note: This article was originally published in the Spring 2019 edition of the Dallas Fort Worth Real Estate Review. The story has been updated to reflect the fire on May 28 that destroyed the former Ambassador Hotel, a landmark property that the Lake’s company planned to redevelop into micro apartments with a restaurant, retail, and a speakeasy.

When Amanda Moreno-Lake started her entrepreneurial life at age 11, selling paletas—a popsicle-like frozen treat—for 25 cents to her schoolmates, little did she know that her drive and self-professed stubbornness would lead her to become one of North Texas’ busiest redevelopers.

You’ll find her touch in Dallas’ Bishop Arts District and in downtown Waxahachie. She has projects underway in Ennis and Cedar Hill with her husband, Jim Lake Jr., and other municipalities have contacted the pair about undertaking projects in their towns, too. 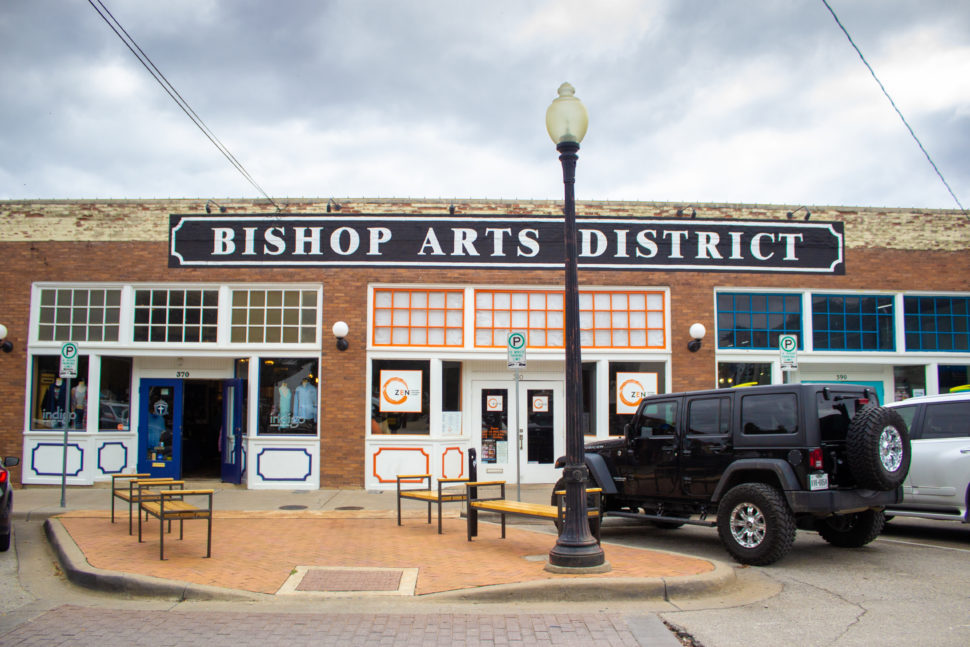 Moreno-Lake is a busy woman, and she has many titles.

She’s vice president for operations and a partner in Jim Lake Companies with her husband. She’s the owner of Lake-Moreno LLC, which oversaw the renovation of the historic Rogers Hotel and the redevelopment of roughly 200,000 square feet of mixed-use retail, commercial, office, and residential property in Waxahachie. She’s the CEO and owner of VA Capital, a commercial investment company.

And there’s more. Moreno-Lake is a consulting property manager for Victor Ballas Investments and the owner of C&K Capital and 2 Esquinas at Bishop Arts. Add to that the consulting work she’s done in the past and her role on the board of Dallas Area Rapid Transit and other community organizations, and it’s hard to imagine Moreno-Lake has any free time.

The mother of three sons, Moreno-Lake says her most important title, however, is “grandmother.”

Her career in real estate investing and development started in 1992, when she bought a building that housed a typewriting business in Bishop Arts. In 1996, she opened Jaripeo Mexicano, a Western-wear store in Oak Cliff. The following year, she opened a successful beauty salon called Amanda’s Salon & Boutique in the building. Other businesses and real estate investments soon followed—the second building she bought is now the home of Lockhart Smokehouse—and she’s spent several decades working to boost and revive the Bishop Arts District.

Among her newer local projects, Moreno-Lake and her husband bought the 113-year-old Ambassador Hotel—the oldest hotel in Dallas—in downtown’s Cedars neighborhood in 2015, and began renovations in 2017.

READ NEXT First Look: The Ambassador Hotel Redevelopment in The Cedars

Located on Ervay Street, the Ambassador is both a Texas Historic Landmark and city historic landmark. Although vacant for several years, the Lakes decided to begin renovations in 2017, staying true to what they’re known for: breathing life back into decrepit places. The plan was to put micro-lofts, a pool, ground-floor retail, a lounge, and possibly a coworking space.

However, on Tuesday, May 28, the Ambassador Hotel was completely destroyed by a fire and later demolished by a company privately contracted by the developer, as reported by D Magazine. 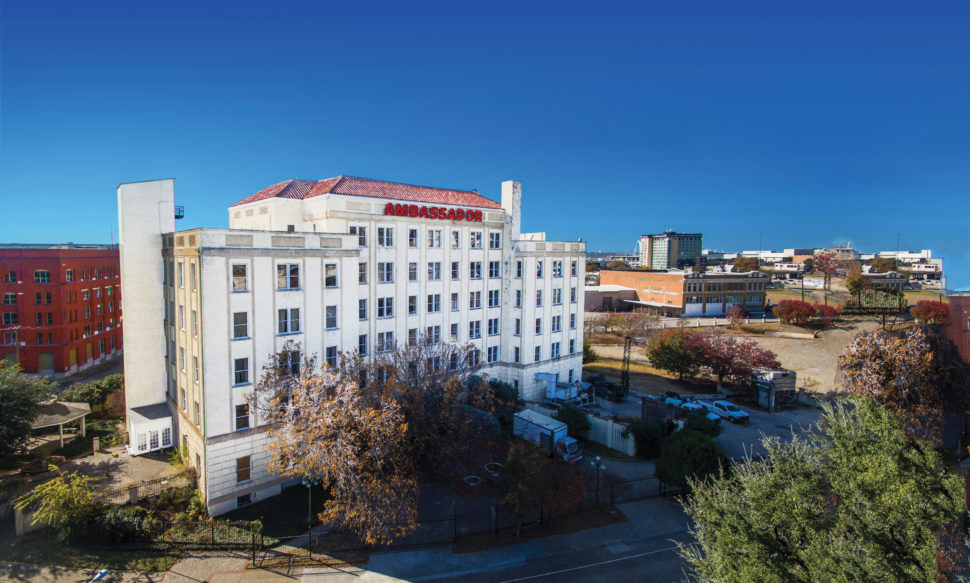 The Ambassador Hotel in The Cedars neighborhood in downtown Dallas in December 2017. [Photo: Michael Samples]

Moreno-Lake is the sixth of seven children born to Mexican immigrants who lived in an 800-square-foot home in West Dallas. The house wasn’t well insulated; in the winter, Moreno-Lake says she slept with her coat on and would use socks as gloves.

She learned how to cook from her mother, and today preparing food in her large kitchen is one of her passions.

She says she didn’t always get along with her father, who worked in the concrete business, but it was he who pushed her to understand entrepreneurship. He even gave her some seed money, which she invested in Bishop Arts.

Moreno-Lake says she saw how hard her mother and father worked, and she attributes her drive to succeed to her upbringing in that cold, small house in West Dallas.

“I knew there’s more to life than this,” she says of her childhood. “I made up my mind that I was going to work very hard.”

Admitting to a streak of stubbornness, the developer says it helped form her dogged nature as an adult.

“I’ve never learned how to quit at anything—I’m very stubborn,” she says. “A ‘no’ always meant ‘maybe’ to me.”

In her view, for every problem, there’s a solution: “You just have to find it.”

Amanda Moreno-Lake in her office at the Jim Lake Companies in Dallas. [Photo: Rebeca Posadas-Nava]

Moreno-Lake says the most important part of her success was deciphering the ins and outs of city codes and learning to work hand-in-hand with city officials to get her projects done. Also crucial was learning how to work with contractors. Her rule now is to identify companies that meet her standards, get three different bids, and build trust.

Moreno, a lifelong entrepreneur, says a placemaker is “somebody who’s really making a difference in a community.” In Bishop Arts and Waxahachie, she’s proven to be just that—and she intends to keep that role.

She’s even left a literal impression on Bishop Arts—her son’s small handprint is still visible in the concrete outside one of her buildings.

In Waxahachie, Moreno-Lake and her husband own buildings comprising more than 200,000 square feet of space. Her husband became a partner with her there before they were married.

Moreno-Lake has owned a 120-acre ranch outside Waxahachie for years, and she says taking a drive to see the city’s downtown sparked her idea for redevelopment in the Ellis County community of roughly 35,000 people.

“To my biggest surprise, there were all these beautiful buildings, but they were vacant,” she says. “It was like a sleeping beauty.” She immediately called Jim Lake Jr., she says, telling him she’d found something she wanted to partner on. So it began, and in 2014, the Lakes completed the purchase of many buildings on the city’s historic downtown square.

Notable among them is The Rogers Hotel, a historic, 106-year-old structure that now houses retail, restaurant, office, and loft tenants. The second floor has an events venue. 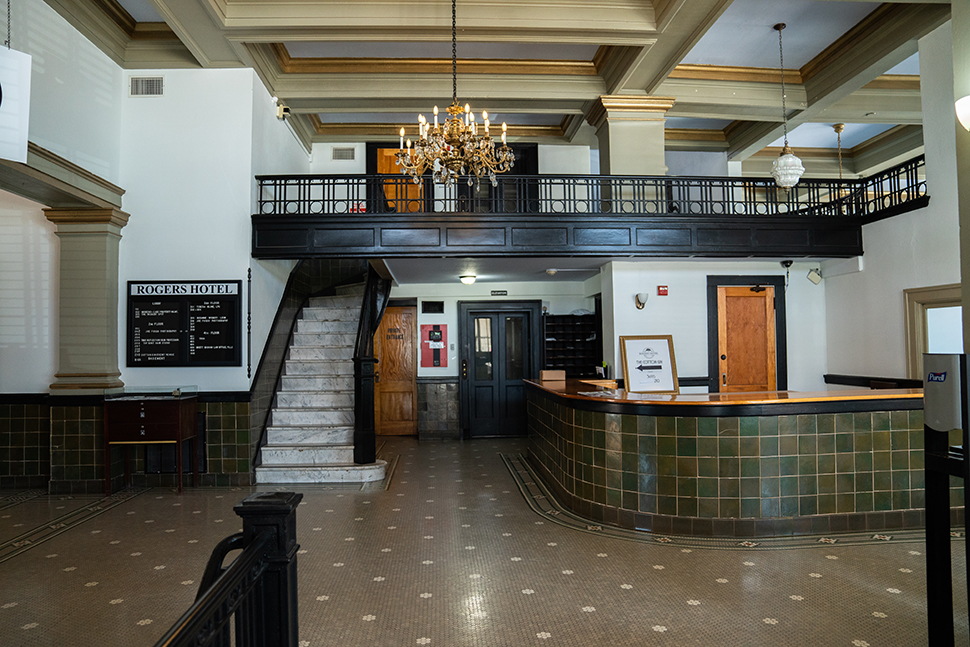 In the building at the corner of Main and Monroe Streets, a motorcycle shop and children’s boutique sit below 12 lofts, which feature fireplaces, polished concrete, and wood floors made from reclaimed basketball court flooring.

There’s also the former County Bank Building and Ellis County records building, which have been redeveloped into retail spaces with second-floor lofts above, as well as the recently purchased Texas Theatre.

The Waxahachie development, she says, has “now become very vibrant, with new businesses coming in.”

Three to four years ago, the Lakes acquired buildings in Ennis and have been working with the city to create a mixed-use development with 11 buildings. David Farrell is the architect on the project.

Her project in Cedar Hill will include a mix of retail, office, and residential space. Its $10M first phase will take a 40,000-square-foot lumberyard built in the 1960s and turn it into retail, restaurant, and event space.

The first phase is on roughly 5 acres of land near the intersection of West Belt Line Road and Broad Street. Completion is expected in 2021.

While Moreno-Lake’s past has influenced her life in many ways, it’s the future that keeps the developer eyeing new challenges.

This article was originally published in the Spring 2019 edition of the Dallas Fort Worth Real Estate Review. Read it here:

Read the digital edition of Dallas Innovates’ sister publication, the Real Estate Review, on Issuu.
Sign up for the digital alert here.