Giving Back: A Fashionable Cause in DFW’s Startup Scene 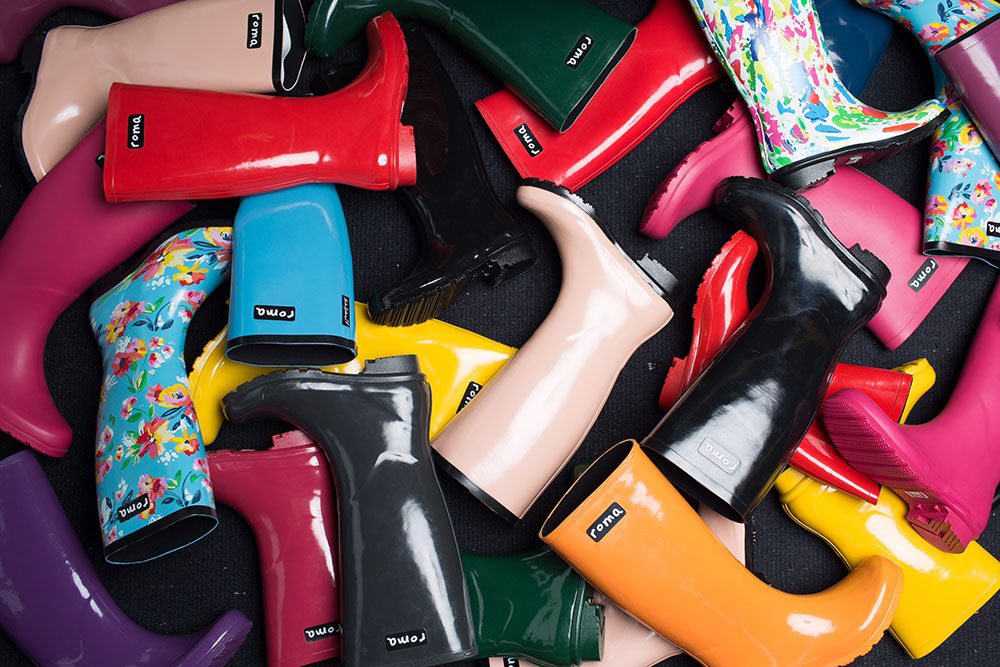 Giving back is en vogue for fashion and lifestyle startups in Dallas-Fort Worth. Both new and more established companies are devoting a portion of their growing businesses to helping their communities, partnering with national charities, and impacting the lives of those in need internationally.

“There are some really amazing things happening here,” says Bryan DeLuca, CEO and co-founder of the Dallas-based startup Foot Cardigan. “Get plugged in. Everyone can do something.”

In addition to having a positive impact on others, giving back can also be good for business. While startups often must stretch every penny, new companies that give back are making a wise long-term investment, especially when it comes to connecting with millennials. According to a recent consumer research report conducted by the global brand consulting firm Landon, “top millennial brands are pillars of the community giving back to society, serious about sustainability, and treating both customers and employees fairly.” That means brands that connect with millennials through demonstrated social good today may very well have a lifelong base of customers going forward.

Leading with both good hearts and good business mindsets, many of DFW’s startups and businesses are contributing to communities and causes. Read below for a few Dallas-Fort Worth companies that are making giving back the new black. Of course, we only scratch the surface of DFW’s good businesses with good hearts, so share the people, companies, and organizations who you’ve noticed are making an impact in the comment section and with @DallasInnovates.

In November 2014, DeLuca teamed up with Matt Alexander, a fellow Dallas entrepreneur and founder of the fashion and lifestyle companies Need and Foremost, to open Unbranded, a pop-up exhibition and event space that provides new leaders in DFW culture, arts, design, and fashion a platform to showcase their creative acumens. 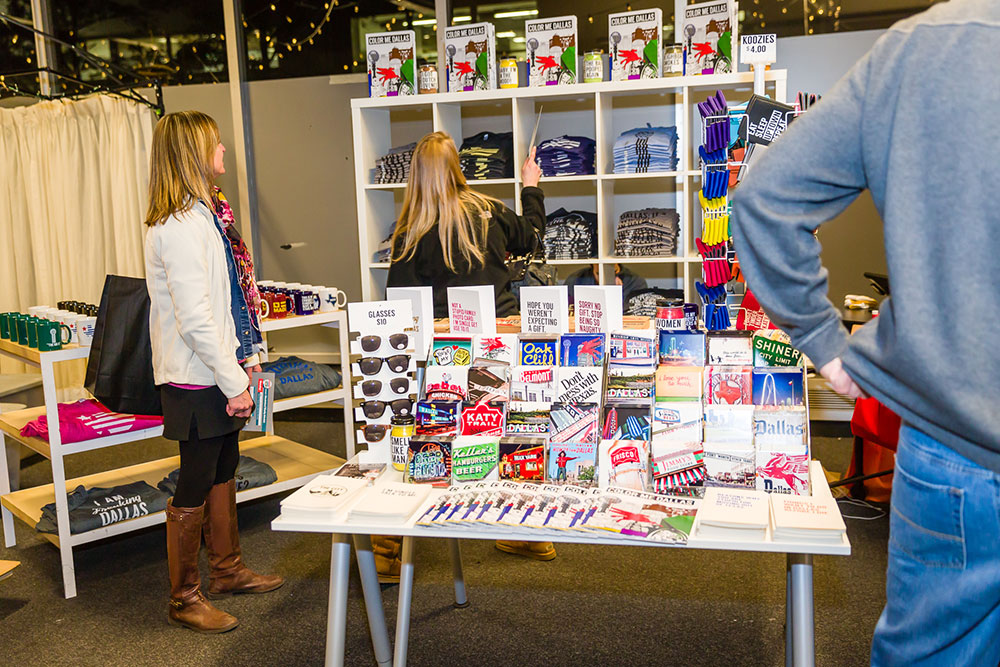 For DeLuca, Unbranded is meant to support the startup community, as well as the emerging cultural scene. “The main thing about Unbranded is that it’s free for vendors to participate,” he says. “We know what it’s like as startups trying to save every dollar.”

In November, the two launched Unbranded II, which counted companies such as 9HappyPeople among its vendors. 9HappyPeople sells clothing with a positive message and donates 50 percent of its profits to help create jobs in South and East Dallas. Founded by Dallasites Candice Quarles and Amrit Kirpalani in February 2015, it uses “the softest fabric you’ll ever touch.” Quarles’ and Kirpalani’s impact on their local community, however, might be the ultimate secret ingredient to their comfy clothes.

The duo behind Unbranded is giving back by supporting their fellow entrepreneurs. And they’re doing so in a way they feel is best for the community.

“I think most people associate the term ‘giving back’ with a physical property like money or a one-for-one kind of business model. But right now in DFW, I think the most important resource this entrepreneurial community needs are people,” DeLuca says. “We need human capital to help carry the momentum of this burgeoning startup community into a thriving metropolis where amazing things aren’t just being built, but are having big successes.”

Hari Mari, the purveyor of fine flip-flops, continues to show that a new company can devote resources to charitable causes while weathering the transition from a startup to growth-stage company—and proves that it can be done successfully.

Sometimes, our best ideas happen in our dreams. “In the middle of the night in October of 2014, I decided if I was going to continue to work for years to come, I wanted to absolutely love what I did,” says Erin Ballard, the Park Cities mom who founded Veux, a fashion startup. 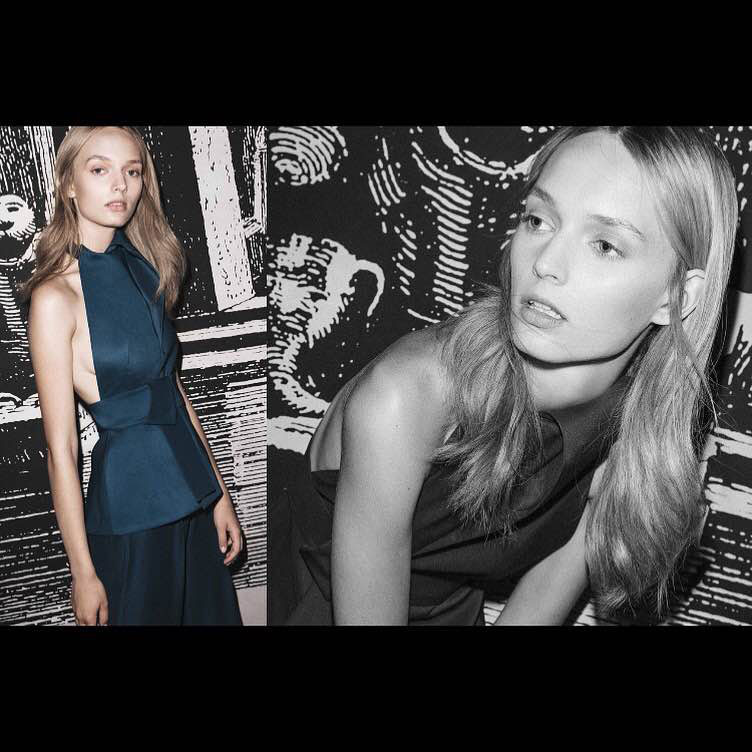 Veux sources up-and-coming and forward thinking designers on a monthly basis, and then sells their fashions on its website, as well as through pop-ups and other brick and mortar stores. The startup is unique because five percent of its sales go to a featured monthly charity chosen by Ballard from a list of suggestions presented by each month’s designers.

“I have always been passionate about charities as well as fashion,” Ballard says. “It just made sense to combine the two into a company that could operate online and eventually as a brick and mortar store.”

The startup is seeing growth in its first year. Something Ballard feels is both good for business and for the charities Veux gives to.

“My first check written to a charity (Soles 4 Souls) was $47.20. I sat across from the CEO of Soles for Souls at Starbucks and handed it to him,” Ballard says. “We both had a good laugh about it, but we could see the potential in these charitable contributions from Veux growing.”

By immersing herself and her company into DFW’s startup ecosystem, Veux grew her business and its impacts. And it did quickly.

In addition to having one of its first brick and mortar experiences through participating in Unbranded II, Veux was chosen for the highly selective Tech Wildcatters’ class of 2015. “Those 12 weeks I spent at 211 Alto downtown were invaluable,” Ballard says.

As with any startup, there is much work to be done. But to give an idea of how potent Veux’s good heart, good business mentality has been: less than a year after writing a check to Soles for Souls, Ballard was able to present the organization with a donation 15 times as big.

“The next check I sent to them was $715,” Ballard says. “We plan on our numbers increasing every month.”

When founder and CEO of Roma Boots Samuel Bistrian was 8 years old, he and his family immigrated to the United States from pre-revolutionary Romania. Emboldened by the struggles he faced as a kid growing up in poverty in his communist-ruled home country, Bistrian founded Roma Boots in 2010. 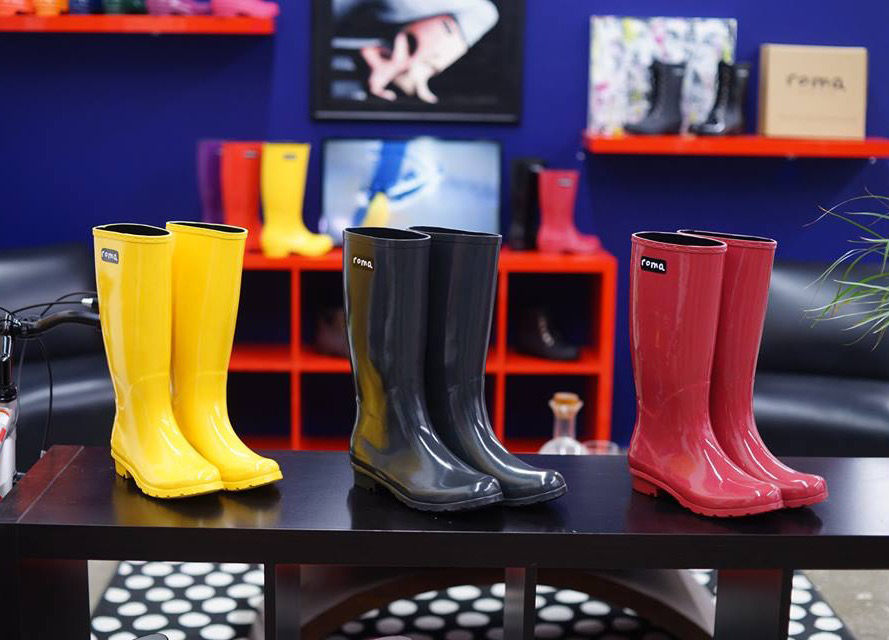 “I wanted to merge my love of fashion with philanthropy,” says Bistrain, whose company gives one pair of rain boots stuffed with educational supplies to children in need for every pair it sells.

Bistrian was driven to provide children in poverty with adequate shoes after his first trip back to Romania in 2001. During his visit, Bistrian was struck by the fact that many children were forced to walk in rain and snow with poor quality shoes, and in many cases, with no shoes at all.

Bristrian donated shoes and other articles of clothing to his home country, and also made annual service there. But he felt more had to be done.

Then in 2009, while working with Neiman Marcus, Bristrian met Blake Mycoskie, founder of TOMS Shoes—a company that donates one pair of shoes to children in need, for every pair it sells.

Bristrian took what he had learned through his previous humanitarian efforts, infused it with the experience he gained through his decade-long career at Niemen Marcus, and launched Roma Boots.

Today, Roma Boots are sold at 500 boutiques and Nordstroms. And as Roma Boots grows, so does it global footprint. “We’ve donated boots in 25 countries on five continents,” Bistrain says. “In many of those countries, we partner with learning centers to provide educational supplies and encourage children in those communities to learn to read and write.”

The company donates 10 percent of its sales to its Roma Foundation to help the children receiving the boots get an education. “The boots that we donate are simply a conduit of hope. Giving poverty the boot takes it a bit further by focusing not just on aid, but education. Through education, we can eradicate poverty mentally and physically.”

Bistrain credits Dallas-Fort Worth with both his entrepreneurial and philanthropic successes. “Dallas has been incredibly supportive over the last five years,” he says. “I’m honored to be based in such a great city.”

Creative
Launching into the Metaverse: Dave & Buster’s World on Roblox