Galaxy Unmanned Systems Chosen for Research Contract with the Army

Fort Worth-based Galaxy Unmanned Systems LLC might be the first ones to use autonomous airships for military surveillance after it was awarded the U.S. Army's Small Business Innovation Research Contract.

Galaxy Unmanned Systems (GUS) provides development, support, and services for the unmanned aerial systems industry (both civilian and military). The innovations could be anything from concept and design to manufacturing and testing.

GUS has more than four decades of experience with autonomous systems, and says it has refined and improved its airship designs for a diverse range of industry applications.

The team features a core group of industry professionals, and was founded by two brothers, Tony and Jason White.

Most recently, the company’s proposal for an aerostat/airship hybrid was selected for the U.S. Army’s Small Business Innovation Research (SBIR) contract. The SBIR contract, to be awarded in early 2020, calls for the “enhancement and augmentation of current aerostat capabilities that provide low-cost, persistent intelligence, surveillance and reconnaissance during high-intensity conflicts.”

The intent is to design a variation of a hybrid aerostat/airship that can operate autonomously.

GUS says this is the first step toward building prototypes and, ultimately, full deployment in hotspots like Afghanistan. 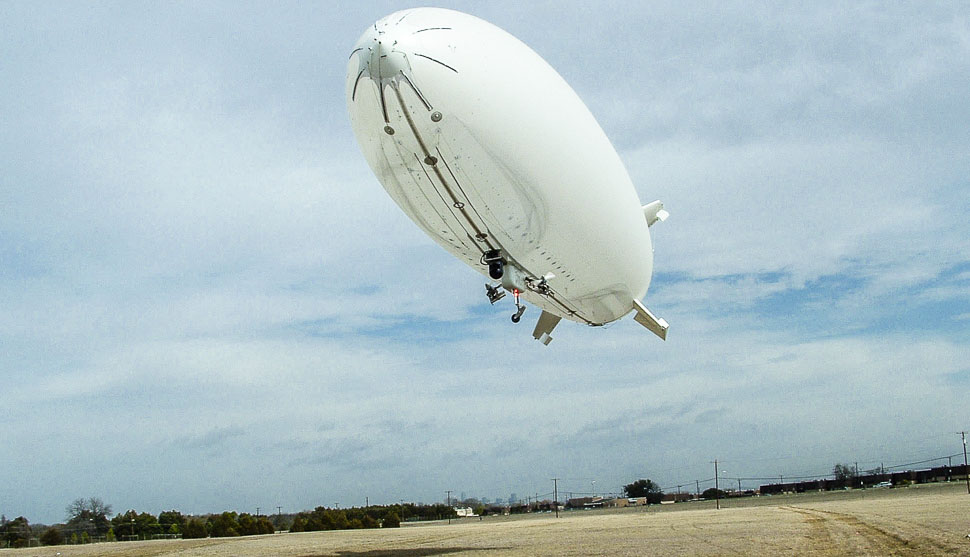 GUS’ airship can stay in the air longer with a much heavier payload than the traditional quadcopter drones that have become increasingly popular in recent years.

The helium-filled airships can potentially fly for days at a time versus traditional recreational drones’ 30 minutes. Plus, they can carry a 200-pound payload of sophisticated cameras for day and night continuous surveillance.

And, compared to the armed Predator drones—a remotely piloted aircraft previously used by the Air Force and CIA—the GUS’ airships are a fraction of the cost, meaning the Army isn’t as concerned if they are shot down by hostile forces.

“If and when the Army decides to dedicate the funds that are available for this project, Galaxy appears to be the choice,” says Tony White, who has completed two combat tours as a Boeing Scan Eagle UAV pilot contractor. “The contract calls for Galaxy, working with its strategic partner, Waterlines AeroDesign LLC, to perform a feasibility study for leveraging our commercial unmanned airship designs for military use and demonstrate potential capabilities via use of commercial products as military prototypes.”

Phase 1 of the project will be to determine the type of propulsion it will use. Jason White, who’s also a managing partner, says they’re looking at either a gasoline-powered engine or a hybrid electric/gasoline engine. GUS is doing a propulsion study with the Research Institute at the University of Texas at Arlington.

Someday they could explore a solar-powered airship that could constantly charge onboard batteries but, for now, the weight of the batteries and the size of the solar panels needed isn’t viable for flight, White says. That technology could potentially allow the airship to provide constant surveillance without having to refuel.

The Whites have already proven themselves with the military, having trained hundreds of Army drone pilots on how to operate tethered aerostat drones. These drones were used to defend small tactical bases in Afghanistan. With the tethered airships deployed, the amount of improvised explosive devices and other threats dropped dramatically in the areas surrounding the base.

That proved the airship technology works successfully and eventually led to the Army picking GUS to develop the untethered airship drone.

And the Army application is just the beginning.

“Surveillance is the justification for the research but it can spin off into a bunch of different agencies and even commercial enterprise,” Jason White says.

In addition to the Army contract, Galaxy Unmanned Systems was selected to participate in the Hillwood Mobility Innovation Zone at Alliance Airport where they’re testing all kinds of autonomous vehicles for everything from Uber Air to Amazon. The airship could inspect infrastructure, survey the land or position over live sporting events.

These ventures could be even more profitable than the U.S. Army contract, White said.

Ultimately, GUS says it takes “back-of-the-napkin” ideas and turns them into final implementations with quick turnaround times. Its unmanned aircraft system solutions can be used for military and civilian organizations for a variety of situations.

GUS actually got its start developing airship drones for the commercial sector from 2000 to 2009, long before the quadcopter (a multirotor helicopter) drones gain popularity. White says they got to do the first live broadcast from a drone on television for ESPN’s coverage of a National Hot Rod Association drag race in 2008.

Unfortunately, the next year, the Federal Aviation Administration (FAA) cracked down on all unmanned aircraft in the commercial sector. It’s been a long, slow comeback for the industry since. White says the regulations have finally been put in place that allow a full-size airship drone to take on commercial applications.

The potential for live sporting events could be huge because an unmanned aircraft could operate at a fraction of the cost of a full-size blimp with pilots and camera operators on board. They could also be used for wildlife support, search and rescue and scientific research.

GUS has also developed a helium recovery system so they can capture the helium from the airship when they deflate it rather than just venting it to the atmosphere.