Skeeter Hawk's Brandon Roach has never met a mosquito he liked. So he's out to zap, fry, swat, sizzle, repel, electrify, and dehydrate all he can. Here's how you can too— in a all-natural, chemical-free, patent-pending, relentlessly mosquito-destroying way.

One summer day in 2012, Brandon Roach blasted his 4-year-old son Gable with clouds of mosquito repellant. He was worried about Gable catching the West Nile virus in their Keller, Texas, back yard. Then he worried about all the chemicals Gable was slathered in every time he dashed outside. That led to a life-changing thought: A lot of other people must be worried about this too.

Roach had a background in electronics, so he began tinkering with alternatives in his workshop—heated elements that release a nontoxic mosquito repellent, a battery-powered wearable, and other solutions.

Those early tests grew into a line of products from Skeeter Hawk—a Fort Worth-based company whose all-natural, chemical-free anti-mosquito devices are distributed nationwide at Walmart, ACE Hardware, an e-commerce site, and other retailers.

Their goal is to arm you with repellents, zappers, bait stations, and traps so you can battle skeeters without spraying harsh chemicals on you and your loved ones.

In the company’s nearly decade-long journey from idea to widespread retail distribution, Roach and his team came to two key conclusions:

One, the best mosquito defense is to fight on multiple fronts, from repelling to zapping to baiting and trapping. That’s why their product line offers “person to patio” protection.

Two, mosquitoes see in two different wavelengths and are attracted to two different bands of light. So Skeeter Hawk uses a dual-band UV light frequency to make its zappers and traps more effective. 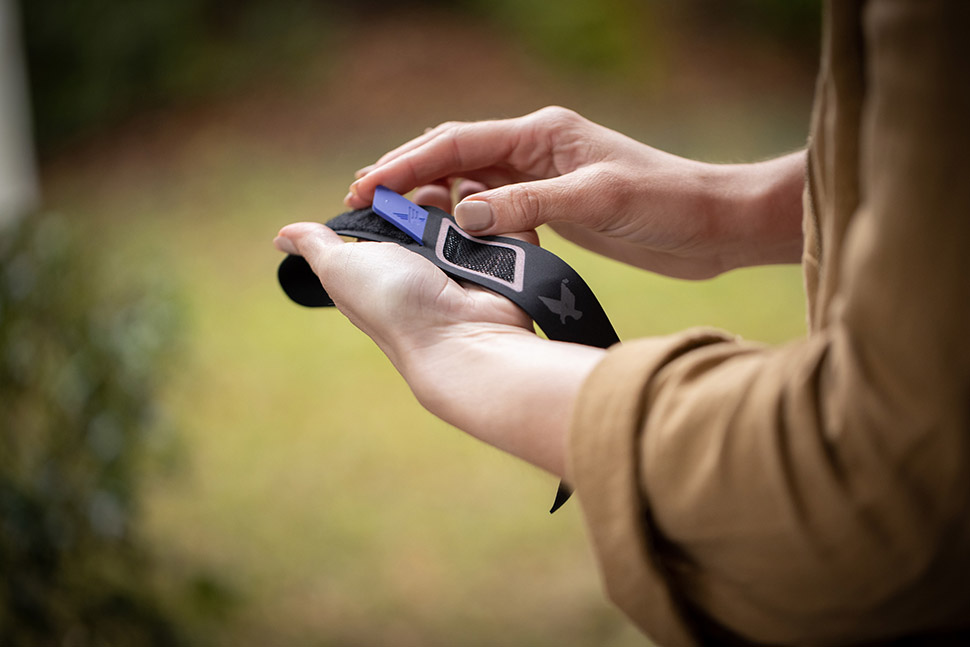 Skeeter Hawk’s wearable wristbands and carabiners ($9.99) come with two replaceable essential oil tabs, which Skeeter Hawk says are effective for 30 days at repelling mosquitoes and flying insects naturally. The wristband weighs less than a third of an ounce and has a hook-and-loop closure.

The carabiner wearables can be clipped to a backpack or belt loop for what Skeeter Hawk calls all-day personal protection from mosquitoes and other flying insects. Weighing just half an ounce, they’re made of stainless steel and are weather resistant. 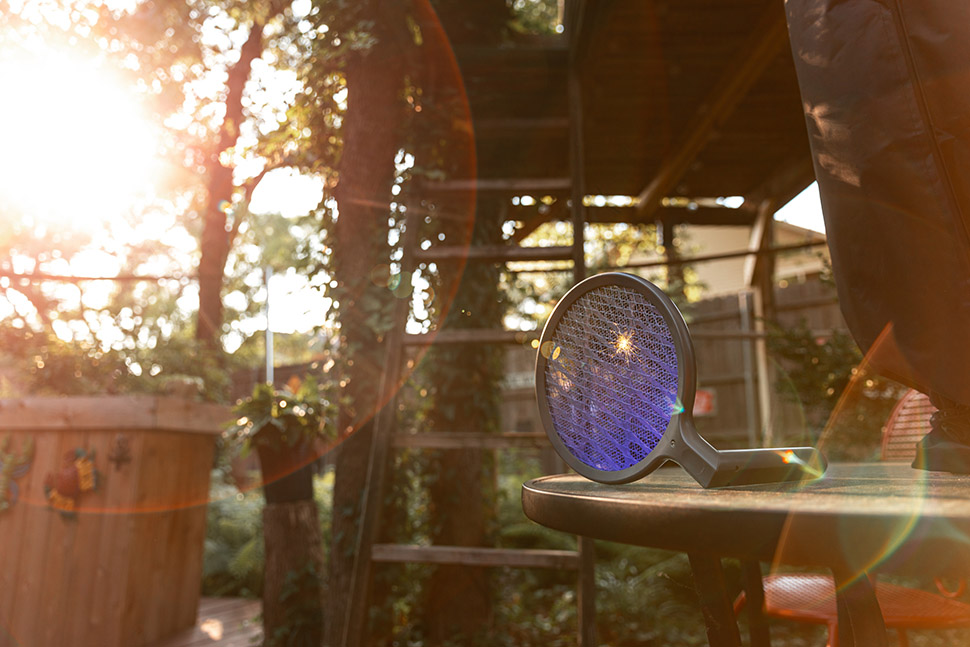 Skeeter Hawk’s newest product dropped just last month: the Handheld Mosquito and Fly Zapper Racket ($29.99). Shaped like a tennis racket with an articulating handle (above), it attracts mosquitoes and flying insects with UV light, then electrocutes them with a 2000-volt electric grid inside a protective covering. The device is USB rechargeable with a provided charging cable.

You can leave the handheld zapper sitting around and it’ll work on its own. Or you can swivel the handle so it’s straight and go on the hunt yourself, whacking and smashing skeeters in mid-air. (Or better yet, have a beer and let the kids chase them around all day.) 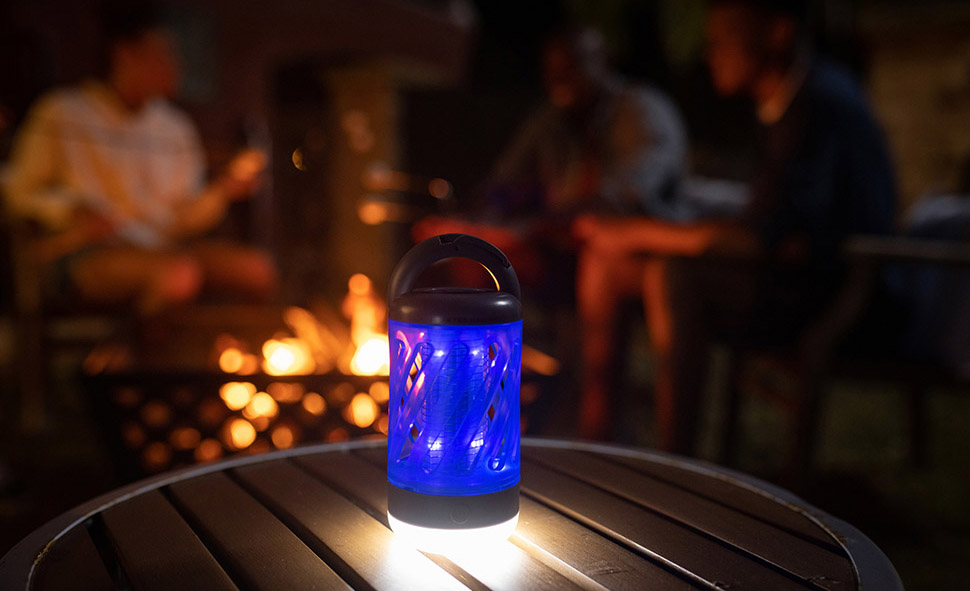 Zappers: go big or get personal

Skeeter Hawk’s Premium Mosquito Zapper ($59.99) is powered by 110-volt AC current for maximum zappage. For outdoor use, it’s a chemical-free, 360-degree solution with a foldaway handle that can serve as a hook. Using what the company calls “patent-pending dual band UV LED technology,” it attracts mosquitoes and other flying insects before merging them with the infinite in a devastatingly final, no-kidding-around way.

A more personal-sized version (above) acts as both a zapper and a lantern ($29.99). It can be used in three modes: UV only, UV + lantern, and lantern only, and is micro-USB rechargeable. The dual-setting lantern works in high mode (150 lumens) and power-saving low mode (45 lumens).

For perimeter protection, Skeeter Hawk offers a Backyard Bait Station 2-pack ($29.99). Looking like a black flashlight with a hanging hook, they use UV light to attract mosquitoes and other flying insects to the all-natural, powdered insecticide bait inside. When insects feed on the bait, they will become tiny haloed insects in insect heaven before they can breed more evil progeny to plague your BBQs.

A dusk-to-dawn sensor turns the UV light off during the day. The bait stations are powered by 3 AAA batteries. The company says the bait tube inside is effective for 90 days. Two-pack replacement bait tubes are available.

Gable, the four-year-old boy who started all this in Roach’s Keller back yard, is now 13 and uses Skeeter Hawk wearables to fend off mosquitoes. But his father says Gable’s “greatest joy” is using the Area Mosquito Trap ($89.99) and Patio Trap ($59.99), which helps him “build out his impressive bug collection.”

The traps are powered by 110-volt AC, pairing a dual-band LED UV light with a “whisper-quiet” fan system. The lights attract pesky skeeters and other flying insects, then the fan sucks them inside, where they dehydrate and depart this life for a better place in the unknowable beyond.

Wherever they do end up, here’s hoping someone zaps them there too.