"Putting a spotlight on our incredible Black creatives, designers, and artists here in DFW was undoubtedly the icing on the cake," said Think Three CEO Leah Frazier. 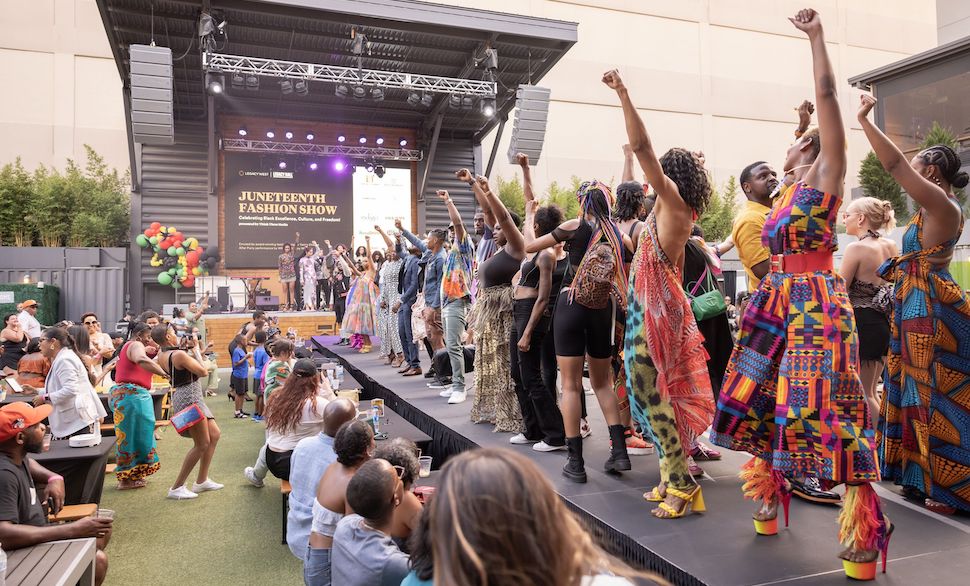 Juneteenth was celebrated in historic style Sunday in Plano—with colorful fashions by 11 local Black designers drawing an estimated 1,500-plus attendees for the first annual Juneteenth Fashion Show at the Legacy Hall Box Garden in Legacy West.

The event was presented and produced by Dallas-based Think Three Media, a creative communications and media agency that specializes in the “unique messaging and amplification of DFW black-owned businesses and their founders.”

Harrison Blair, president of the Dallas Black Chamber, also spoke at the event.

“There are many cultural elements that are uniquely distinct to the Black experience that will always bring a smile to my face—whether it’s through music, the arts, fashion, entertainment, or our culinary cuisine,” said Leah Frazier, CEO of Think Three Media (above), in a statement. “I wanted to share many of these things with the community in an effort to celebrate freedom, unity, and to honor the sacrifices of our elders—including [95-year-old] Opal Lee—and our ancestors.”

Models hit the runway at the Juneteenth Fashion Show to hip-hop and R&B from DJ Dr. Mack (above).

The event was capped off by a live music performance from Grammy Award winner The World Famous Tony Williams.

Here’s a look at some of the fashions shown by all 11 designers, from a festive day in Plano many won’t soon forget: 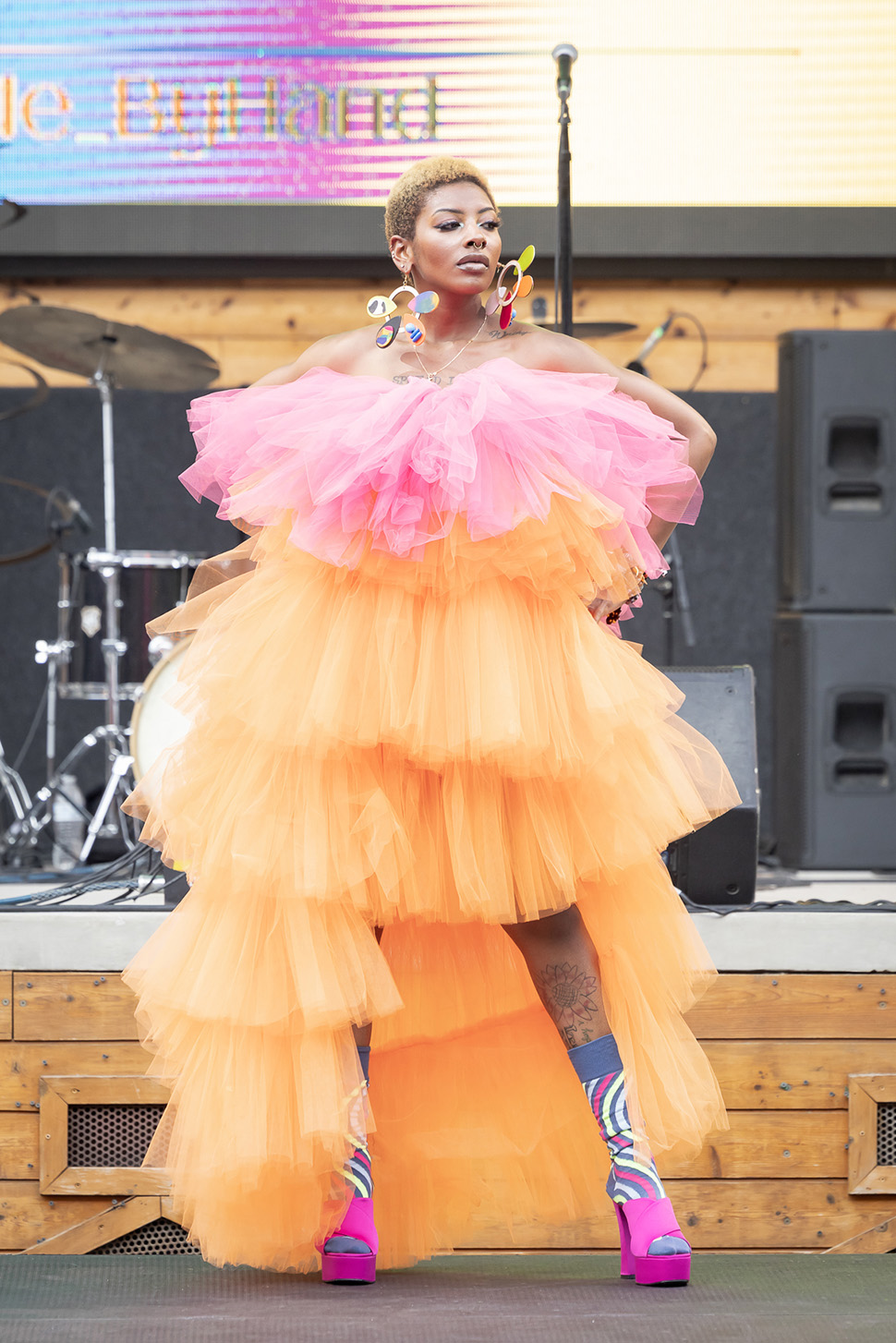 AND-MADE :: Created by Alexis Daniels, AND-MADE is a brand offering a lineup of earrings, accessories and other apparel it says is aimed at “letting women of color celebrate themselves.” Daniels also runs workshops in Dallas. 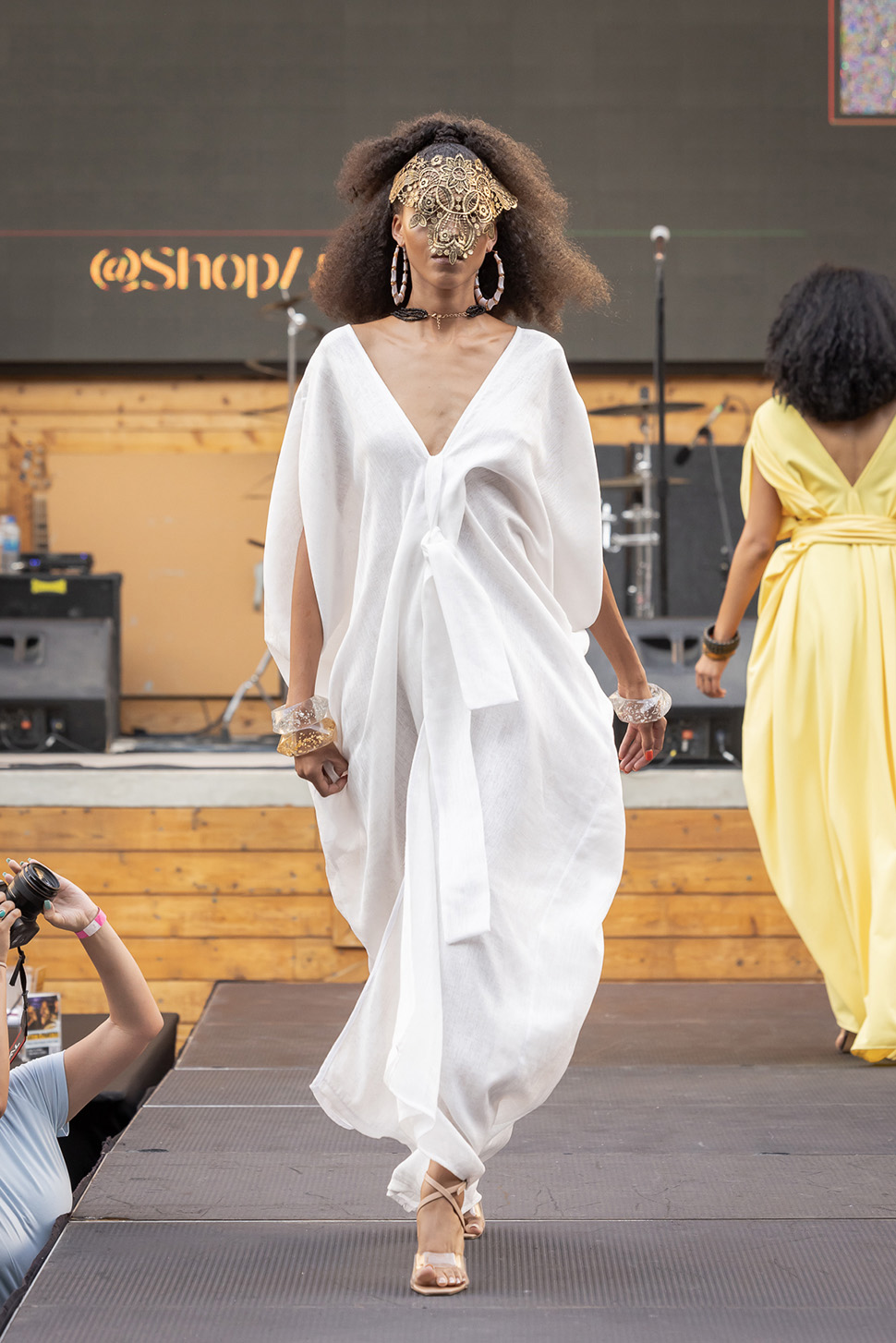 Amy Holly Caftans :: A brand focused on the style of women’s clothing formed by Amy Hampton, the Dallas-based founder of wine and apparel company Sociologie Wine, which has been around for more than a decade. 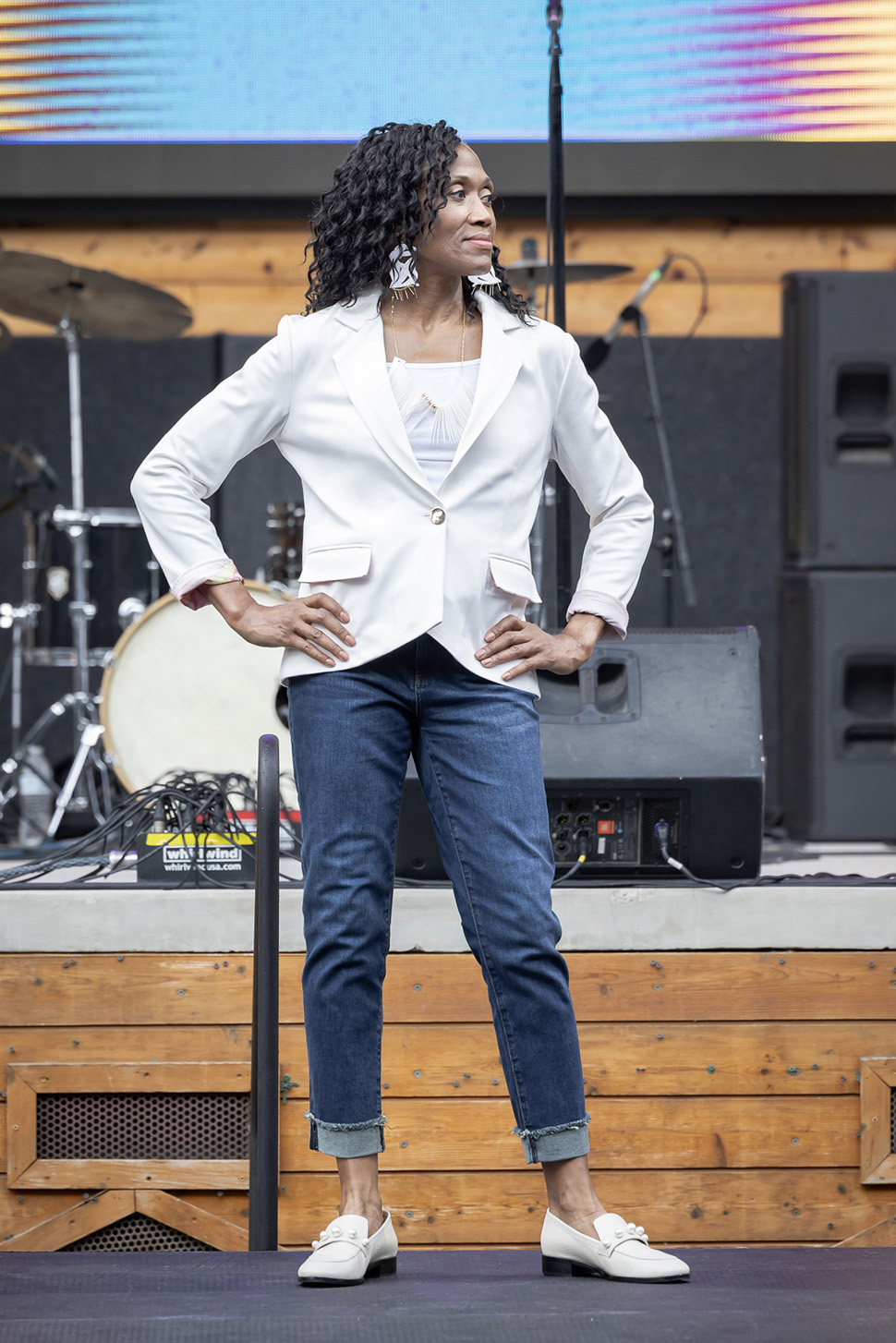 Launched in 2018 by Kimberly Borges and Miriam McDonald, PWR WMN set out to create a line of professional wear with pockets. The company has since grown to offer a range of clothing items and accessories aimed at female empowerment.

Opening its brick-and-mortar location inside Plano’s The Shops at Willow Bend after being formed more than five years ago, Creteation was launched by The Colony-based Bernadette Buentello and her husband Kelvin. Creteation makes jewelry and home décor with a focus on using concrete as a material. 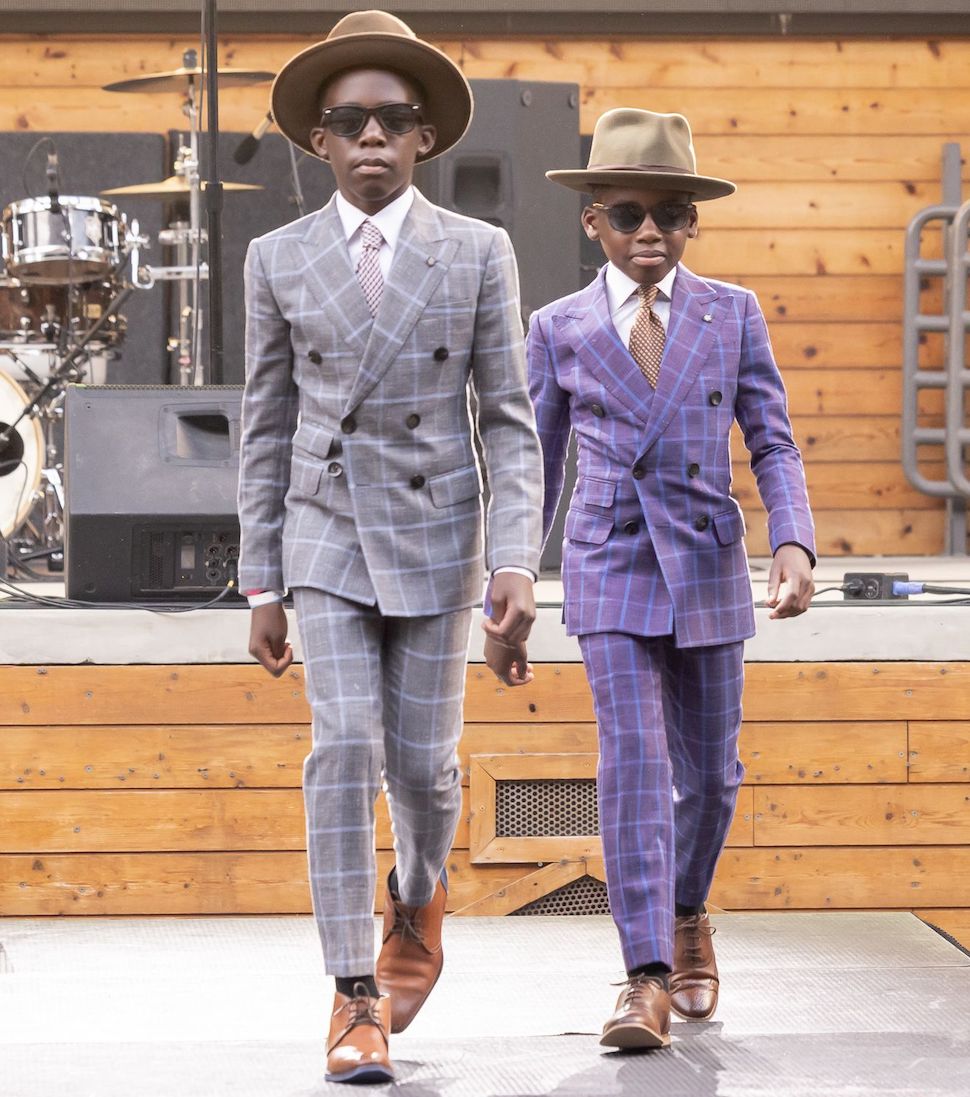 Don Morphy :: Launched in 2014 by Daniel Mofor, Don Murphy is a Dallas-based custom menswear label that worked with notable names including T.D. Jakes, Emmitt Smith, and Tyson Chandler. Mofor is also behind a local initiative to create suits and other attire for underserved residents in across the region. 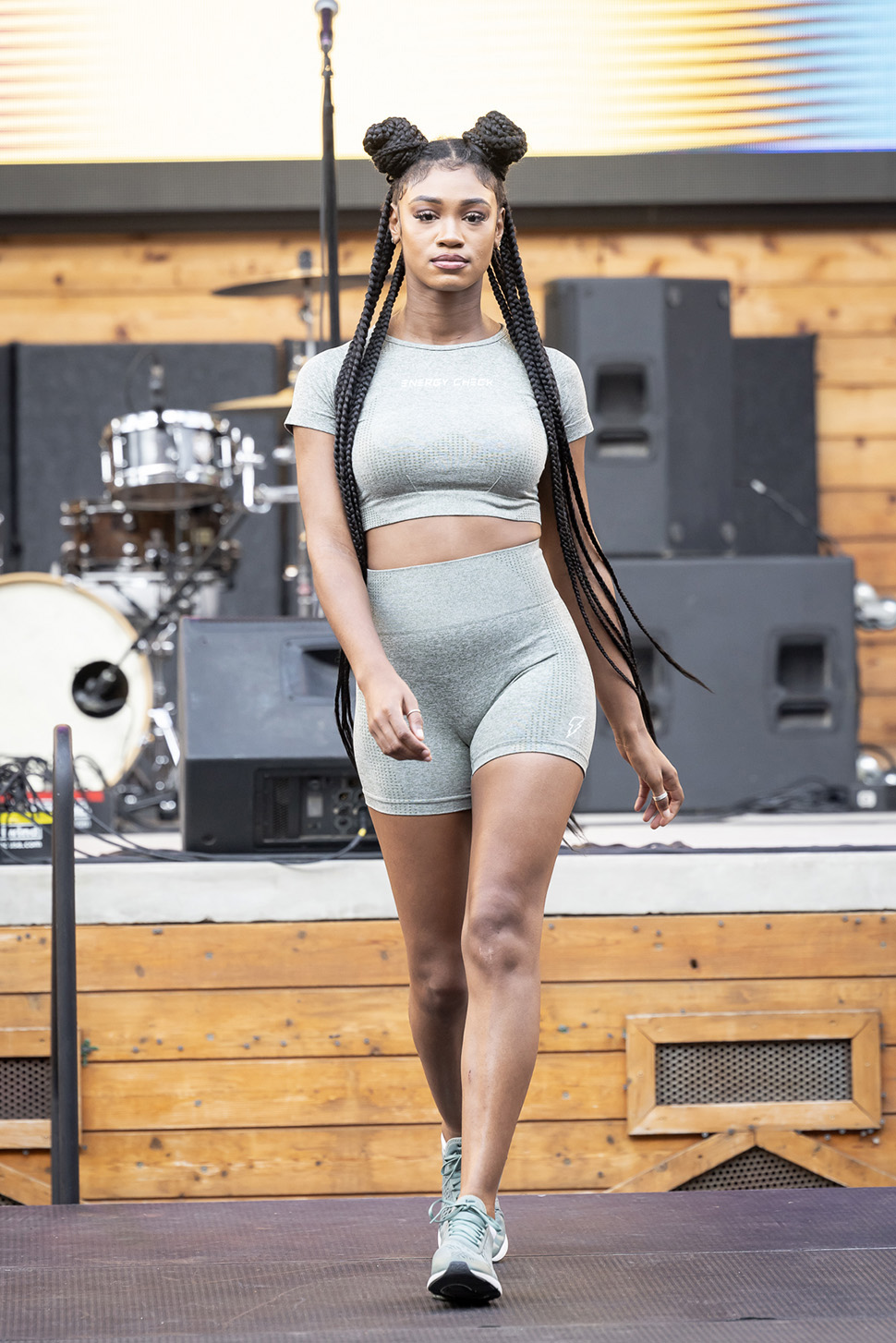 Energy Check :: Launched to the public in 2020, Energy Check is a line of activewear created by barber and social media influencer Le’Nard Meyers, based on a desire to spread positivity through his reach. 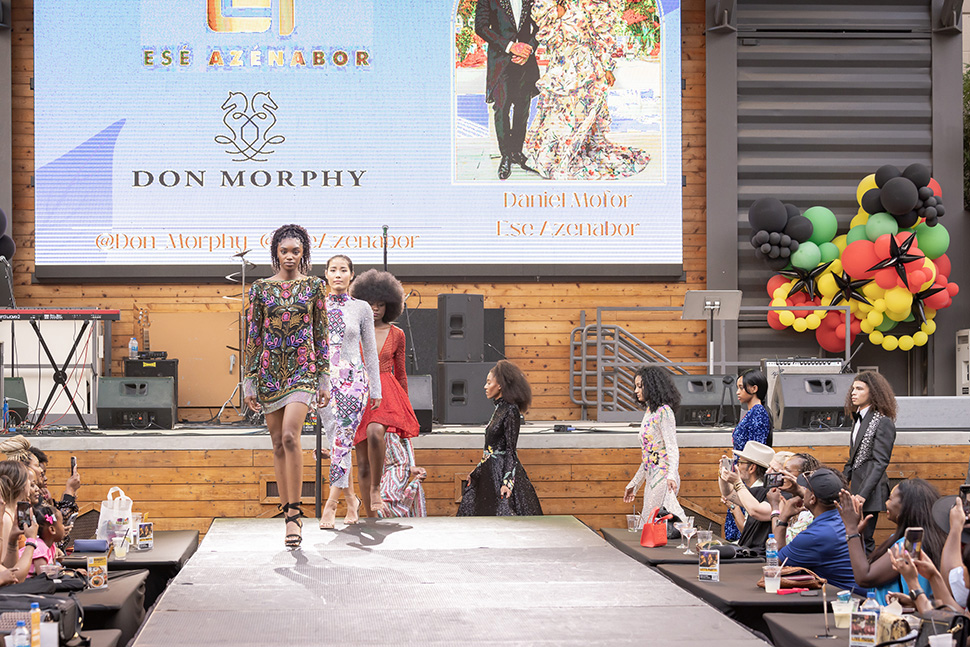 Esé Azénabor :: Named after its eponymous founder Esé Azénabor Grembowski, the Dallas-based fashion brand was launched in 2012. Since then, the company has gone from selling dresses on eBay to having them worn by people like Tyra Banks and becoming “one of the hottest names in bridal haute couture,” according to The Dallas Morning News.

Another Esé Azénabor design is below right, with a Don Morphy tuxedo at left: 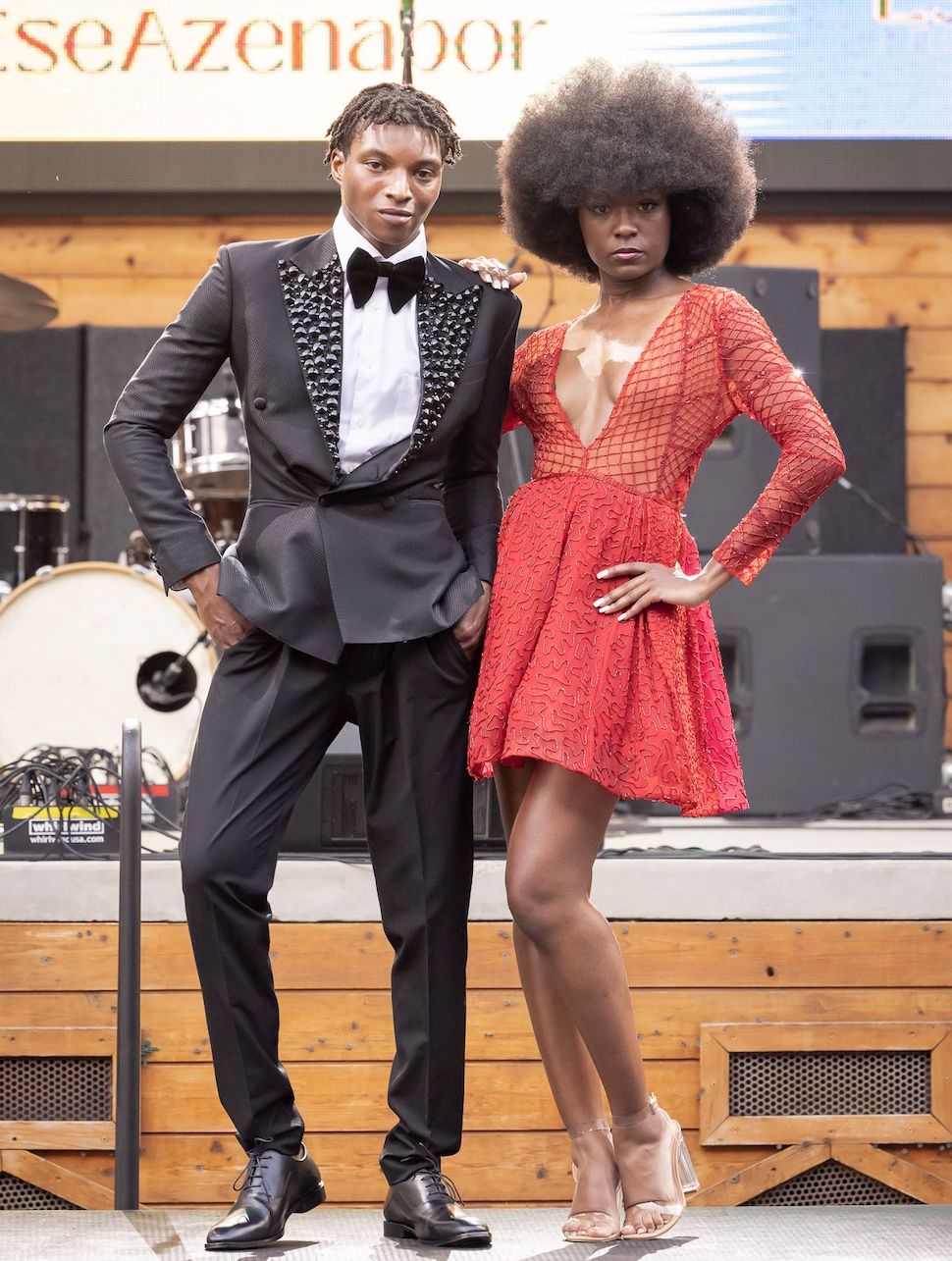 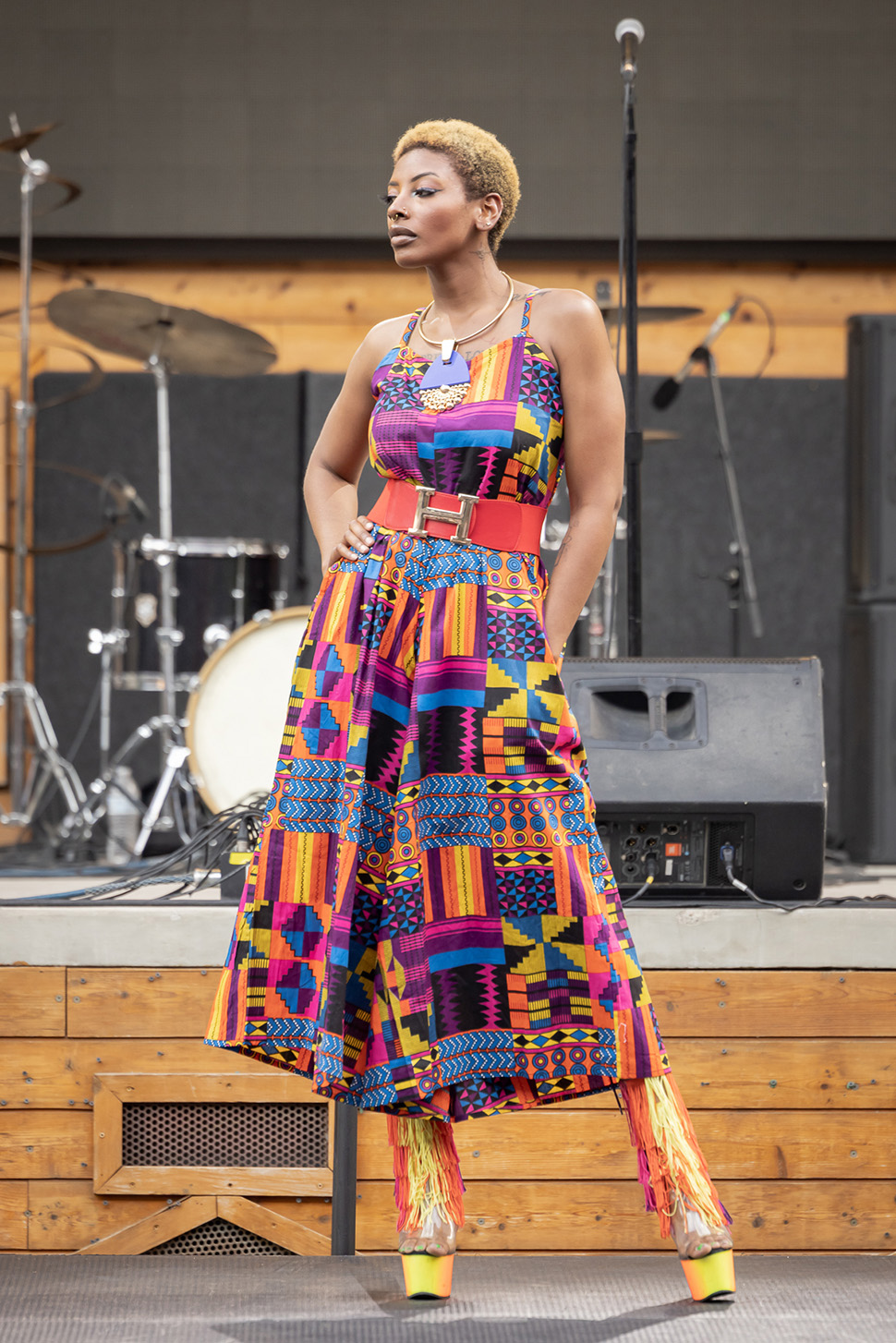 House of Dasha :: Created by Quiana McDaniel, who also founded the brand Dasha Cosmetics, House of Dasha is a clothing boutique in Desoto aimed at making affordable, contemporary women’s clothing. 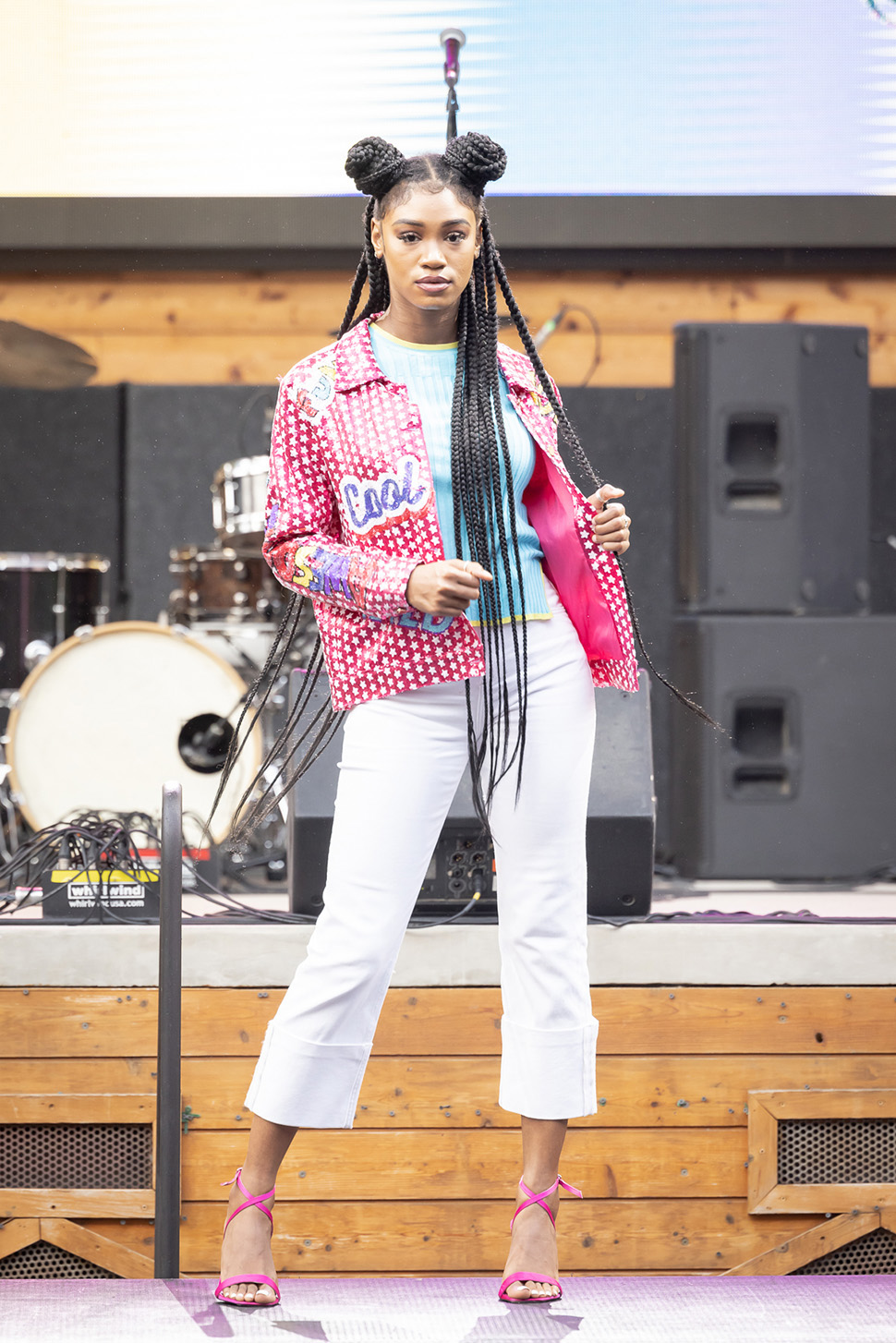 Indigo 1745 :: With a brick-and-mortar presence in Dallas’ Bishop Arts District for more than 15 years, Indigo 1745 is a boutique for men and women. Its focus is on offering “an inviting space to find new fashion.” 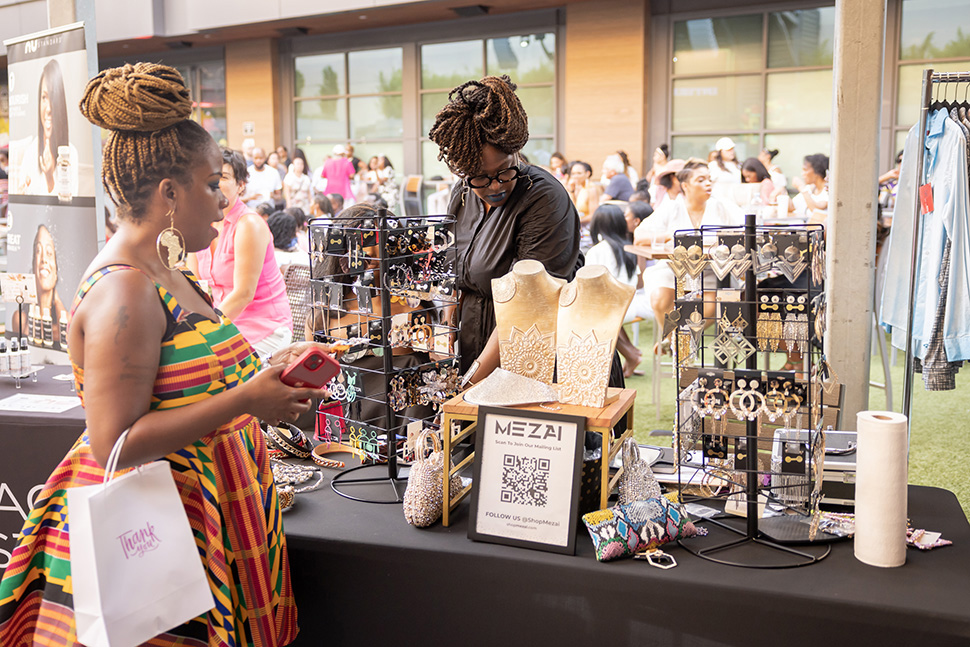 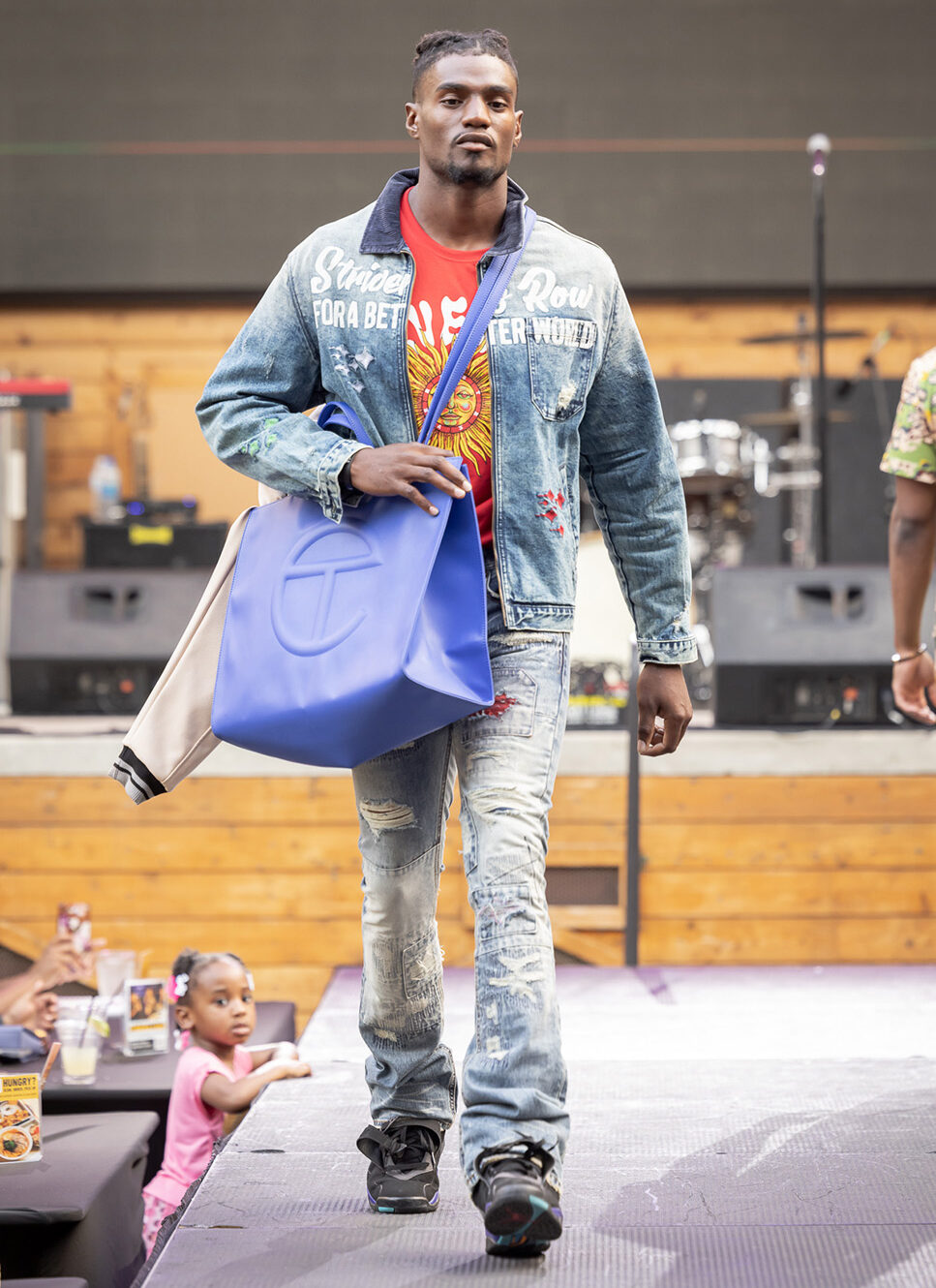 One Street Sales :: A fashion sales agency based in the Dallas Market Center, One Street Sales offers a line of various Black-owned brands in categories including activewear, contemporary, and men’s apparel, in addition to providing marketing and brand development services. 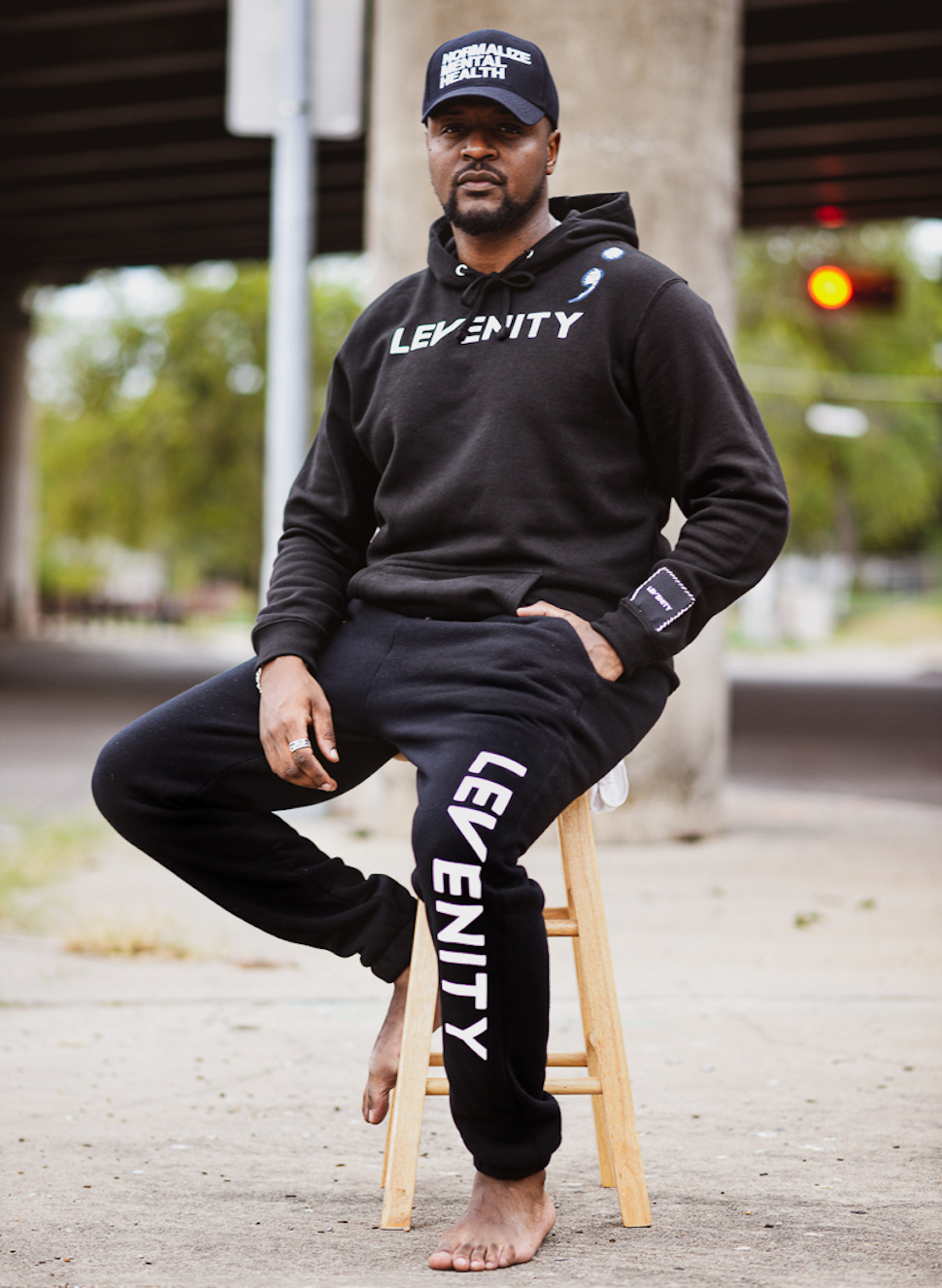 Venny Etienne :: A Dallas-based designer of Bravo’s ‘Project Runway’ fame, who counts clients like Cardi B, Beyoncé, and Niecy Nash. He’s rebranding his new collection, but Etienne is wearing items from his current collection in the photo above.

Kevin Cummings contributed to this report.