In this roundup of research and development activity in North Texas, you’ll also read about a scientist at UT Arlington who discovered bone-like particles in blood, which is a find that could help physicians treat life-threatening conditions.

A discovery sheds light on the growth process of black holes

An associate professor at the University of North Texas, Ohad Shemmer, is part of a team of astronomers that recently discovered evidence of the most remote “cloaked” black hole ever found.

“Using NASA’s Chandra X-ray Observatory as well as data from Pan-STARRS, an optical-light telescope in Hawaii, we discovered the most distant obscured quasar (the bright point where matter is consumed by a black hole) to date, shining at a time when our 13.8 billion year old universe was only 850 Million years old,” Shemmer said in a statement. “This discovery sheds light on the growth process of supermassive black holes in the early universe, which is thought to take place during a phase when the quasar is highly obscured from view by large amounts of gas and dust.”

Shemmer is in the Department of Physics in UNT’s College of Science.

UNT said that supermassive black holes are millions to billions of times more massive than the sun, and usually grow by pulling in material from surrounding space. That consumed material generates large amounts of radiation in a very small region around a black hole. It generates an extremely bright point known as a quasar.

And, even though they emit high-intensity radiation—including visible and X-ray light—UNT said some quasars, particularly the most distant ones, are believed to be generally hidden or cloaked by all the matter surrounding their black holes.

Researchers at UT Southwestern and Imperial College London are doing work that might give hope for a treatment to more effectively reduce appetite and, as a result, obesity. 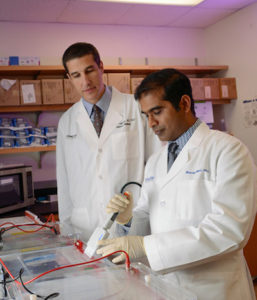 Dr. Jeffrey Zigman watches while Dr. Bharath Mani loads DNA samples onto a gel for electrophoresis. The researchers led a study that determined levels of a certain hormone’s rise or fall in response to metabolic changes. [Photo: Courtesy UT Southwestern]

Scientist are looking at the hormone LEAP2, which naturally blocks the “hunger” hormone ghrelin. They’ve found that LEAP2 is elevated in people with obesity, especially after eating.

LEAP2—short for liver enriched antimicrobial peptide 2—has been a target of interest for weight loss and appetite control since a 2018 study in mice and cell lines showed it attaches to the same brain receptors used by ghrelin, which stimulates hunger and increases food intake, weight gain, and blood glucose levels, UT Southwestern said. LEAP2 blocks the action of ghrelin by binding to those receptors.

Researchers at UT Southwestern and the Imperial College London said they looked at how LEAP2 levels in the blood change in response to metabolic challenges in a new study that involved people enrolled in weight loss studies. It showed that LEAP2 levels increase proportionately to body mass index and other markers of obesity.

The research indicates that LEAP2, a hormone produced in the liver and small intestine, is a natural brake on obesity and overeating, said Dr. Jeffrey Zigman, professor of Internal Medicine at UT Southwestern and co-senior author of the paper.

Rhonda Prisby is an associate professor of kinesiology in the College of Nursing and Health Innovations. [Photo: Courtesy UT Arlington]

Blood vessels within bone marrow may progressively convert into bone with advancing age, a researcher at the University of Texas at Arlington has determined.

Rhonda Prisby, an associate professor of kinesiology in the College of Nursing and Health Innovations, made the discovery while examining those vessels, according to a UT Arlington press release. Her research was supported by the National Institutes of Health.

Prisby’s findings recently were published in the journal Microcirculation, and they suggest that ossified particles may contribute to diseases such as vascular calcification, heart attack, stroke, and inadequate blood supply to the limbs, according to UTA.

“By examining seemingly unrelated images and linking the details of them together, I was able to posit the presence of bone-like particles in the blood,” Prisby said in a statement. “In fact, some of the ossified particles are large enough to clog the smallest blood vessels in the vascular tree.”