Wednesday's panels have tackled disruptive technologies such as blockchain, the corporate-startup relationship, and more.

We’re getting information overload over here in a good way. So many inspiring and insightful moments so far in Dallas Startup Week and there’s still plenty of things left to come. 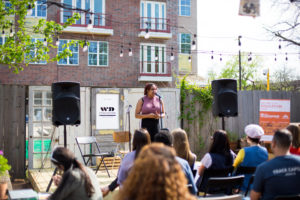 In an education session at Wild Detectives yesterday afternoon, the conversation turned to our future entrepreneurs and how to activate them for change.

The panel featured students and mentors from three different North Texas student programs — Dallas Youth Poets, which teaches high school age kids how to write poetry, Storytellers Without Borders, which helps high school kids become journalists for their community, and lastly, Faith in Texas, which is a multiracial, faith-based movement for social justice.

“As we are developing the next generation technologies it’s going to take a lot of companies and people acting in different roles interdependently — the investors, entrepreneurs, and the innovators who are really imagining technologies we don’t have today,” Ford said.

The former Dallas Cowboys player said “the startup market here has been incredible.”

“It’s like this place is on fire right now. There are so many people who are motivated.”

“It’s so impressive to see … It’s like this place is on fire right now. There are so many people who are motivated.”

His company, CounterFind, helps businesses defend against counterfeit versions of their products being sold on the internet.

Woodson said the startup has barely scratched the surface of counterfeit goods.

“The future is that in the next three to four years, we’ve reached at least four to five different verticals,” Woodson said.

Wednesday morning kicked off with a plethora of startup pitches at the area’s weekly 1 Million Cups events in Dallas, Fort Worth, and Frisco.

And, serial entrepreneur Valerie Freeman, who has started firms specializing in staffing, recruiting, and human resources, took attendees down memory lane of her startup journey during a morning session moderated by D CEO‘s Danielle Abril in Irving.

“Hope is not a strategy. You can’t hope for the best. You got to make it happen.”

Freeman said starting companies hasn’t been an easy path. You have to learn to deal with the challenges that come along the way and you can’t let them consume you.

Leaders are truly tested in times of adversity.

“Hope is not a strategy. You can’t hope for the best. You got to make it happen,” Freeman said.

She also had advice for women trying to navigate male-domaniated fields. She said it’s a great time to be a female entrepreneur and encouraged people to take advantage of it if they’re able. However, she acknowledged that disparities and outdated ideas of gender roles still persist.

“We have to band together [as women] and help each other,” Freeman said.

Back at the Chase Basecamp, blockchain experts discussed all the ways the distributed ledger technology could revolutionize our everyday world.

“This is the next big jump forward,” said Cody Marx Bailey, CEO of XRAM Capital and blockchain technologist. “You have a bunch of people who don’t trust each other with the ability to communicate. There’s trust baked into the protocol.”

The decentralized nature of a blockchain makes it ideal for digital currency, but it’s so much more than bitcoin. Smart contracts could cut out the middleman for buying a home, for example. Car insurance companies could get a much better risk assessment based on driving behavior, when people drive, and where people drive, meaning rates could potentially go down.

Lacey Shrum, compliance consultant and blockchain enthusiast, said there are so many inefficiencies in the world today that could be disrupted by blockchain.

“We’ll own our data again,” Shrum said. “We’re paying for it with our personal information and we don’t know that. They say that we agree to it, but I think that’s arguable.”

GETTING YOUR FOOT IN THE DOOR AT BIG COMPANIES

Huge corporations such as Koch Industries and TGI Fridays are actively seeking out startups that can give them a leg up on their competition, leaders from both companies explained during a Wednesday panel.

“If you’re not thinking about the future, we’re all going to be carrying our belongings out in boxes in 10 years,” Jason Illian, managing director of Koch Disruptive Technologies, said, quoting another Koch executive. “The best ideas aren’t created here. The true entrepreneurs are the ones creating the best ideas.”

Koch established a Koch Labs where it can bring in startups to let them tinker and perfect their concept. Koch usually becomes a minority partner in the startup, Illian said.

“If you’re not thinking about the future, we’re all going to be carrying our belongings out in boxes in 10 years.”

TGI Friday’s Restaurant & Bar is a 50-year-old brand that’s working hard to reinvent and reintroduce itself to a new generation.

Sherif Mityas, CIO and chief experience officer for Friday’s, said he’s in charge of everything that touches the guest. He reports to the CEO about how to make things as frictionless as possible. It’s looking for startups that are still in stealth mode, but have a cool idea that can improve the company’s processes.

Startups that have a solid idea can participate in Friday’s quarterly Shark Tank competitions. Right now, the company is piloting a computerized bartender that’s powered by artificial intelligence. That tech came from a startup who pitched in its Shark Tank program.

The biggest piece of advice Mityas has: don’t try to sell us stuff from day one.

“The ability for you to come in and just listen, to allow my team to learn from you — don’t ever be the smartest people in the room — and just get a good dialogue going, and be ready to talk about what’s next,” Mityas said. “Tie it to something we can measure. We don’t pilot anything unless it has a starting metric for success.”

Tonight brings one of Dallas Startup Week’s marquee events — State of Entrepreneurship. This year’s event will be held 6-9 p.m at the Majestic Theatre in Dallas.

Dallas Mayor Mike Rawlings is expected to attend. Also, the 2018 Startup Evangelist of the Year will be announced. The five finalists are: Leah Frazier, founder and CEO at Think Three Media; Caitlin Studley, director of culture marketing at Lifeblue and director of ecosystems at Launch DFW; Kim O’Neil, founder and managing partner at Cause Studio; Kedreon Cole, director of partnerships and business development at LaunchPad City; and Meagan Moakes, director of community development for RevTech.

Hope to see you there as the community celebrates all its accomplishments over the past year!

How to Make Corporations Your Customers

Jason Illian, Koch: Those people are hard to find—the ones that have the idea and can implement it. That could be you. #DSW18

Sherif Mityas, @TGIFridays: The best and brightest entrepreneurs are the ones that said, "I have nothing to sell you. Let’s just talk about what you’re doing.” Get out there and do those types of things. Use your network. #DSW18

How Lyft is Driving Mobile Marketing in 2018

Jim Keyes of Blockbuster, @7eleven and CEO of @wildoats, giving entrepreneurs at #DSW18 insights to success. Key nugget be fearless and have patience with your ideas. pic.twitter.com/8v5dagxIrl

The ability to embrace change determines the direction you're going. Fireside chat with Former CEO of Blockbuster and 7-Eleven. #dsw18 #jimkeyes #simplicity

“Raise money to scale your business, not to figure out what your business is.” – Joshua Baer #DSW18 #entrepreneur #dallas #startupgrind #business #texas #startup #capitalfactory #money

Momentum: Five Principles for Growing Your Business in the Digital Age

The Zen Master of Marketing @Shama, speaking at @DFWStartupWeek about the Five Principles of Growing Your Brand in the Digital Age. #Momentum #DSW18 pic.twitter.com/AkcnjiNBPk

The Future of IoT Rests on Putting the Puzzle Pieces Together

Business of Social: Bringing the Entrepreneurial Mindset into Nonprofits

Check the official schedule here to sign up for events.