Dallas residents Drew and Christine Bagot talk about what inspired them to start Texas Standard and how they hope to give back to communities.

He found his niche in finance and investment, but fashion has familial roots for him. After all, his mother is Shelle Sills, the former vice president and general manager of Neiman Marcus’ Downtown Dallas store.

When Bagot recognized a void in clothing options, he teamed up with his wife, Christine, to build a brand that epitomized Texas. Classic looks for men including polo shirts that are breathable during those scorching Texas summers. 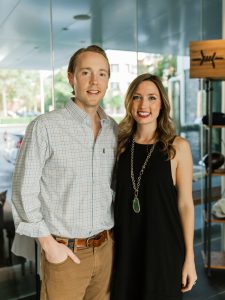 The Bagots have learned the industry along the way and naturally drawn on family expertise and support.

“There’s a lot of work that goes behind the scenes that we didn’t necessarily realize,” Christine Bagot said. “It took us about two years until we actually sold a product and I think that was longer than we had hoped for or expected.”

So far, the Bagots have financed the company themselves. Recently, they brought on another Dallas couple, Court and Mary Clare Alley, to serve as business partners.

Drew and Christine Bagot took a moment recently to talk about Texas Standard and how they plan to use their brand to give back to Texas communities.

What inspired you to start Texas Standard?

Drew: Really, we just had a lot of state pride and felt like there was a big hole in clothes that we as Texans wanted to wear. We’re not really the southeast. We’re certainly not the West Coast or the northeast and there wasn’t something that represented Texans.

So, we sat around and complained about it and talked about it for a long time and finally said, ‘how hard could it be to start a clothing company to kind of represent Texans and fill this void that we wanted to see and our friends wanted to see? It turns out it’s actually pretty hard. It took us a long time to get everything right and get it all up and going, but we put in the hard work and finally just brought it to life.

How would you describe the clothing’s design? What do you think sets it apart from others?

Christine: We tried to keep with a pretty classic look — at least initially — with polos and button-ups that were long enough that you could tuck them in, but not too long where you could still have them untucked and wear with shorts for a more casual look. So, something you can wear at the ranch or in the office or across the different areas of Texas.

“We tried to capture what Texas is all about, but in very simple, classic designs.”

Drew: One of the things that sets our polo apart is it’s got that classic look that’s a very traditional look, but it’s got that blend of new, synthetic fibers that make it more breathable in the Texas heat. It doesn’t have that performance look but has a lot of those performance attributes.

Texans are casual by nature, but it’s still the South in a lot of ways, so our pocket tee is something that we felt is probably the classiest T-shirt that you can wear. We don’t have a lot of visible stitching on any of the seams and it’s got a pretty classic, refined look to it.

We tried to capture what Texas is all about, but in very simple, classic designs. We’re going to innovate that a little bit over time but wanted to kind of cut it relatively conservative out of the gate as we get started here.

As far as production of clothing, where does that take place?

Drew: We designed our own specifications for all of our clothing, so learning how to do that was pretty difficult. It’s a matter of finding different sources of production that can make the clothes, fabric, and fit and feel. And making sure specs are done correctly. That’s what took the vast majority of the time in getting everything developed. We feel like we’ve got a pretty high-quality product …

We do have some vendors we are working with here locally and also out in West Texas and El Paso. A lot of our garments are sourced from some of the same factories that Peter Millar and some of those other types of brands are getting their garments made from as well.

Who would you consider your target market?

Drew: Right now it’s certainly menswear, but we’d like to expand into women’s and kids later on. There’s a generational story that we are trying to tell — sort of the tradition of Texas. A lot of our brand is about connecting to Texas roots and so we want that to be not aimed at just one age group.

“There’s a generational story that we are trying to tell — sort of the tradition of Texas.”

Can you tell me about your logo and why you picked barbed wire?

Christine: For one, we saw the piece of barbed wire as [having] a very rugged, manly, Texan look and feel to it, which we really liked. Also … barbed wire is the beginning of ranching in Texas and if you go to a ranch today, you’ll still see that same barbed wire on that ranch. It’s kind of a timeless item that is really woven into Texas’ history.

Any other nods to Texas with your brand?

Drew: I think there’s a lot more to come. We’ve got some really neat ideas for products. We’re looking at belts, for example, that we are probably going to release soon that are a modern take on the Texas Ranger belt. It was a gun belt for the Rangers back in Texas’ early days even when it was still a country. There are things like that that we are working on developing into our products. But, really right now its about discovering as a company what it means to be a Texan and translating that into clothing.

Drew, your family has been in the apparel business, is this your first experience doing it yourself? What are your backgrounds?

Drew: I’ve got a finance and investment background mainly in smaller company private equity investing. Christine’s been in management consulting and marketing. So, not one of us has any professional experience in clothing, which honestly, I think does give us an advantage in this type of company.

I think if we were trying to be a leading, high-end women’s fashion design firm, I think that would probably be an extreme disadvantage. At the end of the day, we aren’t trying to push the boundaries for a lot of these types of things. We recognize quality as consumers, so we’re not just copying the latest trends from a stylebook like a lot of companies have to do to have 2,000 SKUs out there. We’re really just talking to a lot of people that are here in Texas and [asking,] “what do you like and not like about your options?” and then trying to solve that problem.sku

Tell me about the Ten to Texas program. Any future plans you have for that initiative?

Christine: Ten to Texas is an initiative we started where we are giving 10 percent of all of our profits back to Texas-based charities. So, as of right now we have chosen four [charities]: Texas CASA, Texas Parks and Wildlife Department, Feeding Texas, and Habitat for Humanity Texas. We chose four that were Texas-based and not the individual ones by city, so they really do spread across the state. It was important to us to give back to Texas through this initiative.

We’d love to continue growing it through expanding funding from outside sources other than Texas Standard. And also, we’d love to put on some events with the charities and actually go out there and get a group to volunteer.

What are your plans for the future? What are some goals you’d like to reach?

Drew: For us, we really want to focus in the beginning of building out our awareness and presence and getting as pervasive as we can in the state. At the end of the day, if Texas feels like it owns this clothing brand and identifies with it and we are known throughout the state for giving Texas its own brand — that’s really our short-term and long-term goal.

I think we’d love to see this expand outside of the state, but really our focus is trying to make sure people have an opportunity to be a part of the brand across the state. Within that, we certainly want to expand all of our products and build out our offerings as we go along as well.