Vaxxinity's COVID-19 vaccine candidate is "super safe and mild and doesn’t bring recipients down for a couple of days with flu-like symptoms," says the company's co-founder and CEO, Mei Mei Hu. Unlike mRNA vaccines from Modern and Pfizer, Vaxxinity says its protein peptide-based platform is based on tech that led to a vaccine for foot-and-mouth disease in livestock.

Dallas-based Vaxxinity—which is using synthetic peptides to develop a “safe and mild” COVID-19 vaccine along with vaccine therapies for several chronic diseases—plans to go public this Thursday under the NASDAQ symbol VAXX. The biotech aims to raise $100 million by offering 6.7 million shares between $14 and $16. The middle of that price range would value the company at just over $2 billion.

Vaxxinity has a goal of “democratizing health” by pioneering what it calls the “third biologic revolution”: creating vaccines to treat chronic diseases. The company is developing a new class of therapeutics to treat diseases including Alzheimer’s, Parkinson’s, migraine headaches, Hypercholesterolemia, and others.

“By turning the body into its own antibody ‘drug factory,’ we develop medicines that are easier to make, easier to take, and dramatically less costly than [monoclonal antibodies],” Vaxxinity says on its website.

“The key to the platform is the proprietary library of UBITh peptides, which are immunosilent, avoiding inflammation, and when linked to custom-designed target antigens, can elicit highly specific antibodies,” the company says.

Based on technology that led to foot-and-mouth vaccine

The technology behind the company’s vaccines has been used for decades to create vaccines for livestock against foot-and-mouth disease. Vaxxinity says its platform has been “scientifically validated, with billions of doses commercialized in animal health, and six human clinical trials successfully completed.”

Vaxxinity’s COVID-19 vaccine candidate UB-612 is “super safe and mild and doesn’t bring recipients down for a couple of days with flu-like symptoms,” the startup’s co-founder and CEO, Mei Mei Hu, told Clinical Trials Arena in May, describing it as “the not-so-scary vaccine you would give to your kids.”

Unlike mRNA COVID-19 vaccines from Moderna and Pfizer, Vaxxinity’s COVID-19 vaccine is protein peptide-based. Its platform “works like a sheep in wolf’s clothing, using a synthetic piece of a harmful self-protein that your body normally sees as a ‘sheep,’ linked to a synthetic peptide that acts as ‘wolf’s clothing,’ signaling the immune system that the ‘sheep’ is actually harmful,” the company explains on its website.

“It’s been commercialized in multiple animal health applications, and these are large livestock animals,” Hu told Clinical Trials Arena. “You learn a lot about your technology when you have that much exposure. We learned how to scale up from a manufacturing standpoint and we know how to be efficient about it. We know how to hit low cost of goods to be competitive and we understand the safety and efficacy platform of previous indications, which are both very strong. Because of this we have great confidence and feel very well positioned to tackle the rest of the world.”

CEO Hu told Fortune magazine that limited vaccine options may be one reason that many Americans aren’t fully vaccinated against COVID-19.

“In general, there’s an anti-vax population but it’s actually very small in the U.S.,” Hu told Fortune. “But for COVID vaccines we have about 40 percent of those that are not fully vaccinated. I think that where there’s a gap is, frankly, in choice.”

“We need to have a respectful conversation that understands what people’s concerns are, and so we hope to be able to facilitate that conversation,” she added, “And to offer more choice in terms of having more products available, more types of vaccines. There are some people that are afraid of certain technologies, so offering choice is important.”

Another benefit of Vaxxinity’s COVID-19 vaccine: It requires only standard refrigeration temperatures to remain stable. This could make it particularly useful for distribution in developing countries.

Vaxxinity’s journey to its IPO this week hasn’t been entirely smooth. In June, Vaxxinity signed a purchase order with the government of Paraguay for one million doses of the firm’s UB-612 COVID-19 vaccine. But the deal was contingent on Vaxxinity getting the vaccine approved for emergency authorization from Taiwan’s Food and Drug Administration.

Fortune says the application was rejected, but that Vaxxinity has “submitted new data with the Taiwan FDA and just got approval to run a study in the U.S.”

“You don’t give up in drug development,” Hu told Fortune. “As in life, you persevere.”

Paraguay has suffered one of the worst COVID outbreaks per capita on earth.

In June, Lou Reese, co-founder and executive chairman of Vaxxinity (and Hu’s husband), talked about the company’s focus. 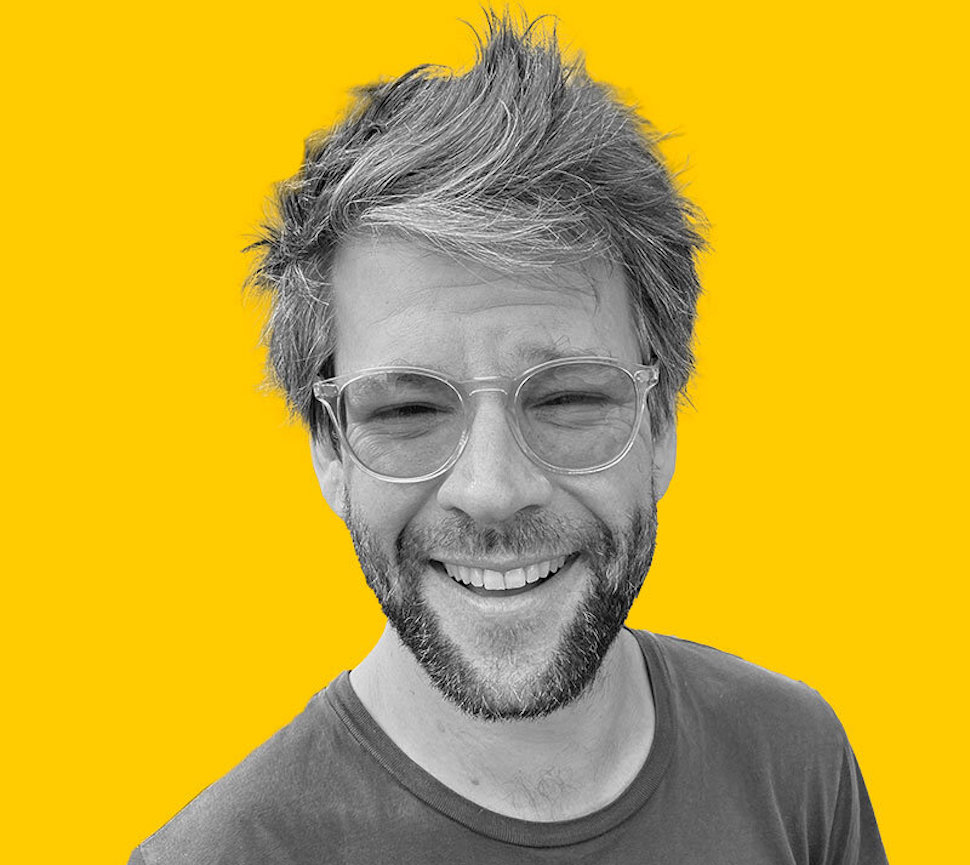 “Vaxxinity has prioritized its focus on UB-612, while continuing development of the other vaccines in its pipeline, in order to rapidly develop, manufacture, and distribute vaccines to help combat the global COVID-19 pandemic in countries most in need,” Reese said in a statement last spring.

Vaxxinity is targeting emerging countries for UB-612, with a focus on India and Latin America.

“I think less than 1 percent of vaccines have been deployed in the developing world and that’s really where we target, our mission is to really serve the underserved,” Hu told Clinical Trials Arena in May.

Vaxxinity was formed in April 2021 by combining two companies

Vaxxinity was known as COVAXX until last April, when it consolidated its vaccine development efforts with Dublin, Ireland- and Dallas-based United Neuroscience.

“Merging our pipelines, leveraging the same platform into one company will strengthen our ability to advance these urgently needed vaccines around the world,” CEO Hu said in a statement at the time.

“It’s a vision that has been quite a while coming,” told Clinical Trials Arena last May. “The two companies leverage the same vaccine platform, have a lot of overlapping team members and the same mission in terms of democratizing health.”

“COVAXX was spun out just for Covid-19 at a time where no one really knew what it was and whether it was going to stick around,” Hu added last May. “Now it’s become apparent that it’s not going away so it made sense to combine the company so we have a single, unified, aligned entity that houses the whole vaccine platform under one roof.” 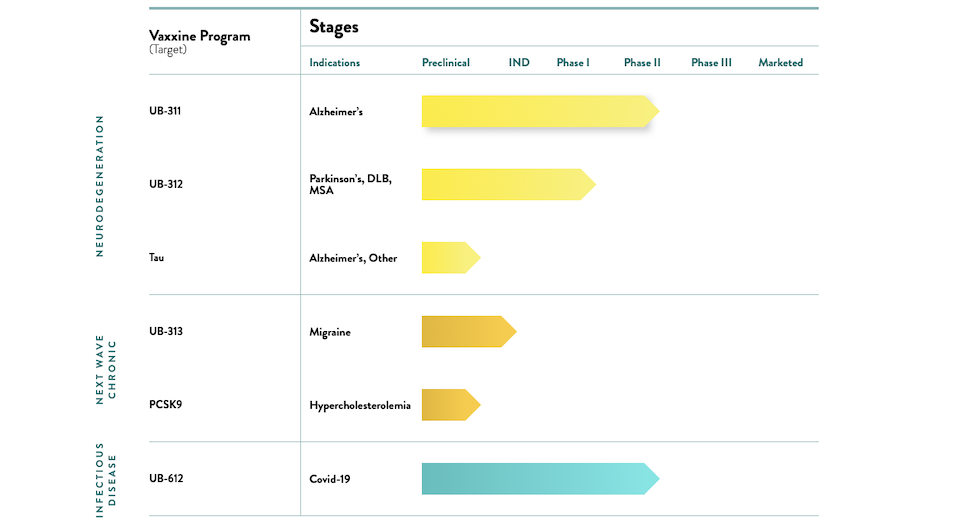 The chart above shows the current clinical trial stages of Vaxxinity’s synthetic peptide vaccines, from the company’s website.

The company says the innovation of complex biologics manufactured in bioreactors —particularly monoclonal antibodies—have been highly effective against certain chronic diseases. But those drugs pose manufacturing challenges, are difficult to administer, and are extremely expensive—which is why less than 1 percent of the world currently receives the medical benefits of monoclonal antibodies.

By bringing its cheaper, more convenient, and accessible vaccines to market, Vaxxinity says it won’t be stealing market share from monoclonal antibodies. Instead, it will expand the overall addressable market—creating what it calls “expansive disruption.”

Production facilities in Taiwan, India, Europe, and the U.S.

Vaxxinity has its own facilities in Taiwan capable of producing its COVID-19 vaccine, UB-612. But the company has sourced additional manufacturers in the U.S, India, and Europe to reach a target of producing  over 500 million doses a year, reports Clinical Trials Arena.

Last April, Vaxxinity announced a global logistics partnership with Maersk, the world’s largest shipping and logistics provider. The partnership created a framework for all transportation and supply chain services that will be needed to deliver UB-612 worldwide.