Brittany Merrill Underwood thought pitching a nonprofit jewelry line in a luxury space would be a long shot.

As she stepped into a meeting with Neiman Marcus CEO Karen Katz in January, she hoped to secure space in maybe five or 10 of the luxury retailer’s stores — at best. 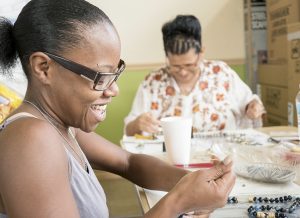 To Underwood’s surprise, Neiman Marcus gave her word in May that it would be launching Akola’s high-end line nationwide in all of its stores.

“The beautiful line combines stylish looks that are on trend with corporate social responsibility — a combination we believe our customer will relate to well,” Neiman Marcus said in a statement.

The partnership helped Underwood reach her goal of expanding Akola’s reach in Dallas.

“They placed an enormous order which allowed us to — in two months over the summer — employ 100 women living in urban poverty,” Underwood said.

For nearly a decade, her nonprofit jewelry line has trained and employed marginalized Ugandan women and invested 100 percent of its profits back into its mission.

The program translated well for the initial group of 15 women referred by West Dallas nonprofits with one snafu, Underwood said. Akola’s mass-market line, which sold for under $100 a piece, didn’t yield enough profits to pay the women a living wage.

“We realized to be able to grow Akola Dallas and help women in our city, we had to come up with an elevated collection really in the contemporary luxury line that sold from $200 to $500, so we could support women to earn $15 an hour in our program,” Underwood said.

“Brittany’s model is certainly unique, however we have and currently do sell other socially impactful brands,” the retailer said. “We worked closely with Toms shoes several years ago on a line that was exclusive to Neiman Marcus.”

Akola shipped out the first pieces of its high-end line in August. An official launch event will be held Sept. 22 at Neiman Marcus’ downtown Dallas store.

But, the collection of bracelets and necklaces didn’t go from concept to store shelves in about eight months without collaboration.

“The best part of this story was really every institution in Dallas — on the nonprofit and for-profit, business side — that all came together to make this opportunity happen for women in our city,” Underwood said.

Thanks to impact investments from a couple of family foundations, which asked not be disclosed, Akola ramped up production and hired 100 local women.

“It gave them the opportunity to earn money to meet the basic living essentials in life.”

West Dallas nonprofits referred several women for employment as well as the Salvation Army. Buckner International and the Dallas Housing Authority both offered up facilities for women to assemble the jewelry.

“It gave them the opportunity to earn money to meet the basic living essentials in life … It gave [the women] a basic sense of worth and skill of something that they could do that they’ve never done before,” Hanson said.

SETTING THE BAR FOR SOCIAL IMPACT

Underwood sees the jewelry’s entry into Neiman Marcus as a milestone not only for Akola, but other social impact brands.

She hopes to challenge other major luxury brands to think about how their products are made as well as other social businesses to see more ways they can help communities.

“There’s so many ways you can have an impact on women and marginalized communities even how you think through the production of your raw materials, assembly, and distribution of your product,” Underwood said.

For Akola, impoverished women in Uganda hand roll paper beads and carve the cow horns that adorn the jewelry.

Instead of just placing it on a wire, Dallas women hand knotted every bead for the Neiman Marcus high-end line.

“We really believe there’s no higher impact you can have as a brand and as a product than having impact through every step of your value chain, production process, and giving it all back.”

One challenge with the elevated line, has been securing gemstones, Underwood said. She found a group in India that has a social focus, but she’d like to partner with others.

“We are trying to work with Ethiopia to get gemstones that could have actually a full social impact, which would be really new and innovative in that space,” Underwood said.

She met recently with Ethiopia’s first lady Roman Tesfaye as part of the George W. Bush Institute’s First Ladies Initiative to talk about how the country could develop an ethical supply chain for gemstones.

Underwood wants to continue striving for community impact in each step of the process.

“We are trying to set the bar in the space for that, so more than one for one, more than give 5 percent or 10 percent, but give it all and even through the way you think about making your product you can make a difference.” 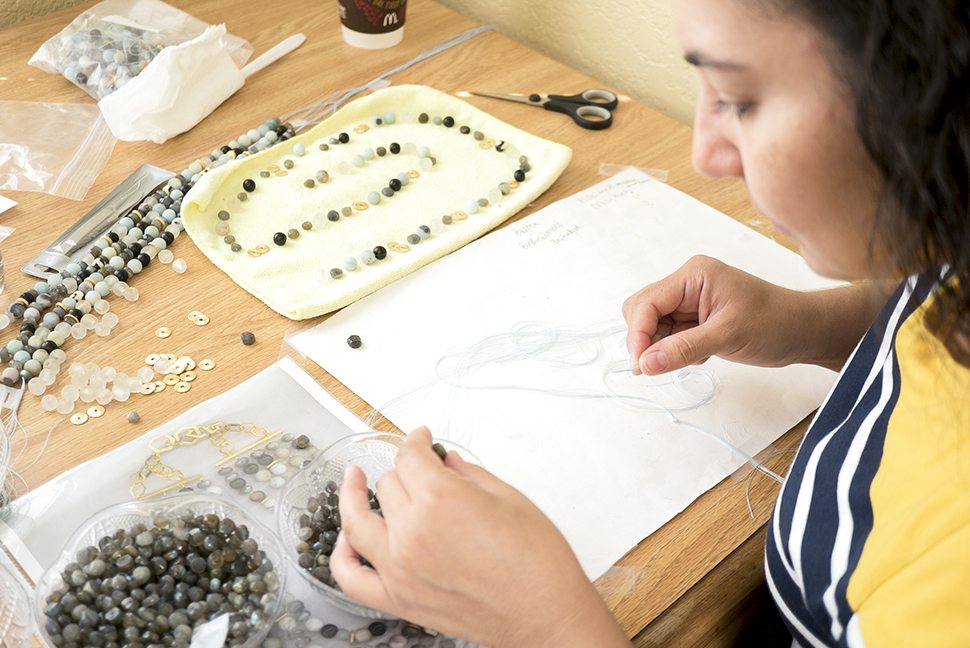 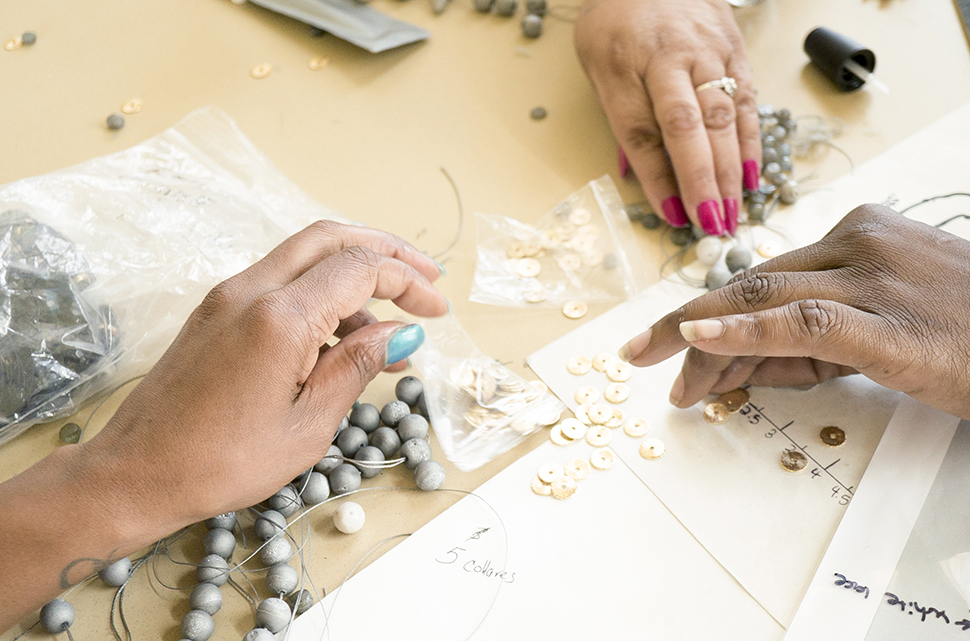 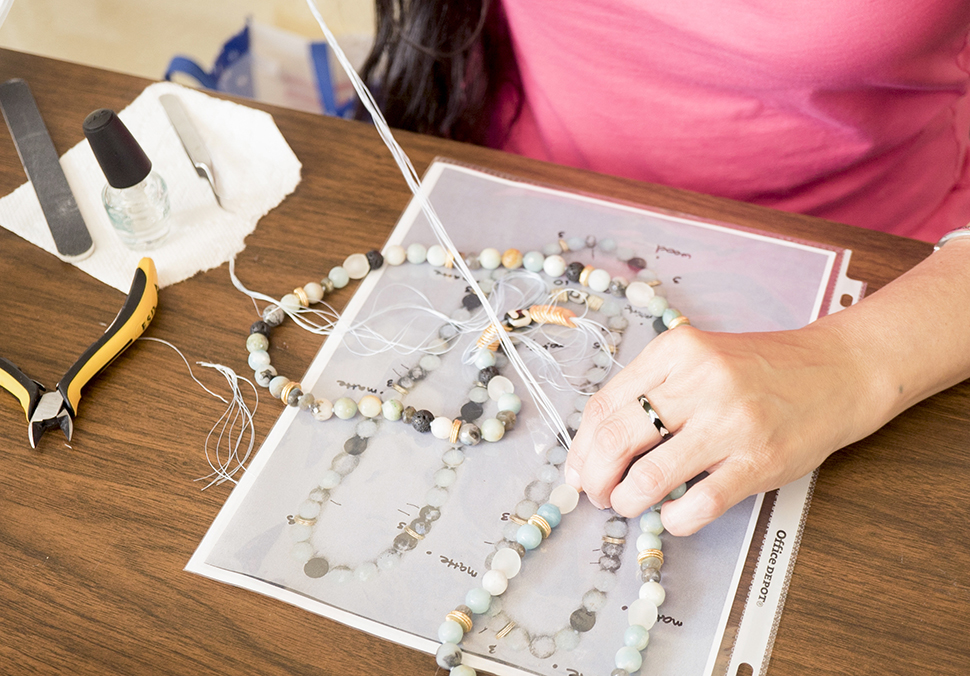 Instead of being just placed on wire, beads were hand knotted for Akola’s high-end line. [Alex Wolf Photography (c)2015]

WATCH: Emily Heger with the Akola Project discusses why North Texas is the best place to operate from, and she gives us her definition of innovation.

Workbench at The Grove: Building an Impact Business

Dallas: The Impact City
When a dedicated, passionate social entrepreneur comes up with an amazing new process to solve a pressing social problem — hunger, homelessness, war, incarceration, education — where should that person go for a deeply connected and efficient hub of resources? Salah Boukadoum has the answer: Dallas.

Becoming the Impact City in Dallas

Delivering what’s new and next in Dallas-Fort Worth innovation, every day. Sign up here.