Meet the group of North Texas innovators behind Hepius Equipment—and see why their onsite N95 mask decontaminator could be a gamechanger in battling coronavirus.

A myriad of companies and entrepreneurs across Dallas-Fort Worth have stepped up to produce personal protective equipment throughout the COVID-19 pandemic. But a group of local innovators, all in various industries, had a different idea—create an entirely new device that could actually make PPE reusable.

Hepius Equipment has developed a technology that uses 254nm UV light to decontaminate and disinfect PPE. The N9500—named because it’s specifically designed for N95 masks, though small PPE works too—has the ability to disinfect four masks at once during a timed cycle using UVGI, or Ultra-Violet Germicidal Radiation.

The N9500 is essentially a small portable device that resembles a desktop printer. Its 11”x 17″ x 17″ portable size is meant to fit on a counter, nurse’s station, or in any space throughout an office, campus, or healthcare provider facility. All you have to do is plug it into a standard 120VAC outlet.

Though unfamiliar to some, it’s actually been recommended by the CDC, which states that “UVGI, vaporous hydrogen peroxide (VHP), and moist heat showed the most promise as potential methods to decontaminate Filtering Facepiece Respirators.”

At its core, Hepius is a medical device company built to address the shortage of PPE brought on the the coronavirus pandemic. The team—locals Ab DeWeese, John Tepper, Tim Hissam, and Rusty Rose—have more than 80 years combined of technical product development experience.

Hepius was originally Tepper’s brainchild. Tepper, who has worked on more than 40 medical device patents, brought in DeWeese, who called up his friend Hissam, who in turn brought in Rose. The team then worked at lightning speed—about a week from idea to prototype—to solve an ever-growing problem across the country.

“We complement each other very well, from engineering to sales to manufacturing to supply chain. It’s been really unique that we can run and handle different things. What would normally take two weeks, we get done in days,” Hissam says. “So I think that’s been the coolest piece for me, being able to utilize each other’s strengths.”

And though they came together remotely, it’s all being done from Hissam’s 30,000-square-foot manufacturing facility, which has the capacity to build several hundred units per day. Dallas Innovates even got an inside look during our Zoom call with the team.

“The idea started in mid-March when I was sitting on the couch and my wife was on the phone with our daughter-in-law who was busy making cloth masks to distribute,” Tepper says. “The news came on and they were interviewing healthcare professionals who were talking about the shortage of N95 masks Someone said they were going to reuse them by washing with Lysol and I thought that was crazy. I’d recently worked on developing a product that was using UVGI light to decontaminate a surgical instrument. And I thought, ‘Why not you know make a system that can do that with masks?'”

UVGI isn’t a new decontamination technology; it actually dates back to the late 1800s. But the Hepius team says when compared to other similar solutions, the N9500 is small, inexpensive, and multi-user friendly. The price is $8,599, but there’s a current sale going on for $5,999 each. 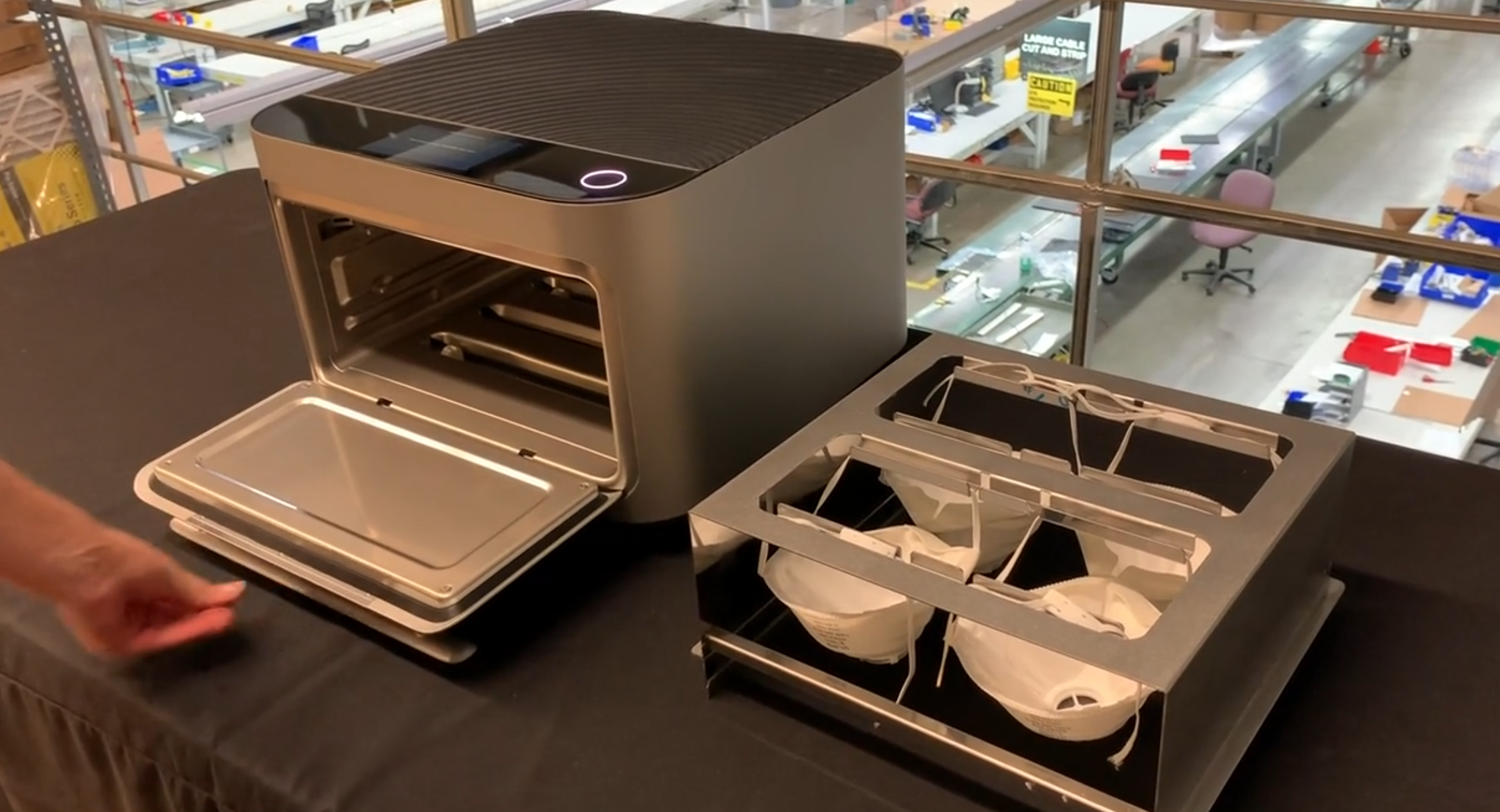 A video on Hepius’ website shows how the N9500 works. [Photo: via Hepius]

One thing that’s extremely important to note, though: It’s not safe for people at home to buy a black light simply because it has UV rays.

Black lights don’t emit the correct frequency of UV light to disinfect, and an item has to be fully exposed to the light to be disinfected properly. DeWeese says if you are able to find bulbs that do emit the correct wavelength of light to hurt the virus, it will also hurt you.

Essentially, people attempting at-home projects could easily procure the wrong light and have no effect, or get the right light and harm themselves.

“Those are grave mistakes. It has to be a very specific wavelength of UV light to be effective. This wavelength of light we’re using is absorbed by genetic material, and it actually disrupts the genome of the pathogen, whether it’s a virus or bacteria,” DeWeese says. “The way that we have the rack in our system, where the mask kind of hangs and is suspended in air, they’re radiated from both sides. There’s no shadowing, so that’s how we know that they get clean. We’ve seen other systems that don’t have that and it’s very alarming. People are going to get a false sense of security by not going about it the right way.”

The device works because it decontaminates PPE at the point of use, without harming the user or the mask itself. The intent is so healthcare providers can immediately decontaminate without a complicated system that often leads to unnecessary transporting and handling.

“There are a number of other approaches to this one, like gathering all of the masks on a rack and taking them to a 20-foot container to gas them with vaporized hydrogen peroxide. No doubt that works very well, but the logistics of that is having to put the contaminated masks and PPE on a rack, take it down the hallway, through the hospital, down an elevator, and out a loading dock door,” Tepper says. “The logistics of that are, I think, daunting. With all the stuff that goes on on a hospital ward, that just seems like an extra layer of moving contaminated stuff around. Our idea was to have a distributed decontamination that can sit right outside of the patient’s room.”

Simply place the PPE on the proprietary hanging rack, press the green button, and the decontamination works in a few minutes. 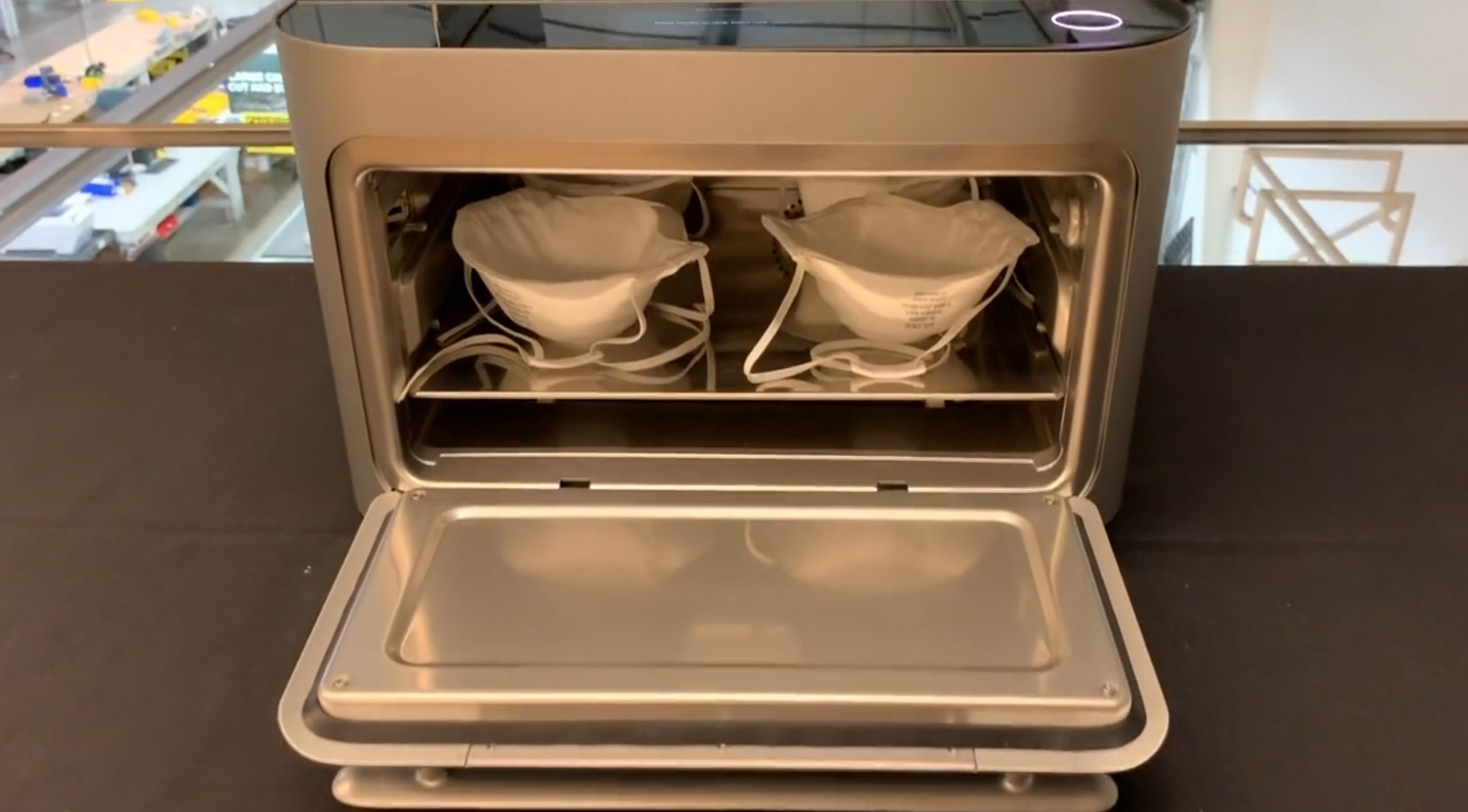 It’s said to work as fast as making a cup of coffee, though the founders emphasize that the time inside, and how often a mask is run through the N9500, is entirely up to the mask wearer. DeWeese says Hepius doesn’t plan on recommending an exposure time, because it’s often up to an organization’s infection control team or medical director.

“We think our solution puts the healthcare provider in charge of knowing that their PPE has been decontaminated,” Tepper says. “They can make the decision to re-wear it as long as they need to, as well as when it’s been worn enough times to throw away and get a new one.”

Electromagnetic radiation between 200nm and 300nm is strongly absorbed by nucleic acids. Radiated energy at these wavelengths kills bacteria and inactivates viruses by destroying their nucleic acids and disrupting DNA/RNA, leaving pathogens unable to perform vital cellular functions. The molecular defects caused by this absorbed energy include pyrimidine dimers, which are molecular lesions formed from thymine or cytosine bases via photochemical reactions. This dimerization reaction can also occur among pyrimidine bases in dsRNA (double-stranded RNA), which constitutes the genetic make-up of most viruses, including coronaviruses.

The first prototype was made a couple weeks ago and taken to Parkland Hospital in Dallas for testing. Last week, Hepius delivered a production unit to Parkland, and expects the hospital to follow with a larger order.

Hepius is now not only ready to produce and sell the N9500, but DeWeese says they’re also interested in partnering with companies designing masks specifically for reuse. The team also already started putting together plans for a second version of the product that would be more customized with additional features to ultimately get approved for consumer use.

“We needed to get up and running with this to address the immediate need and get some capital to move forward,” Tepper says. “We are thinking about the future and we think the future is no more than a couple of months away.”

Immediately up next is what Hissam describes as a three-pronged approach: spreading the message, distribution, and marketing.

“I think our approach is to solve the immediate need, but also to long term build a distribution network that evolves into a real product,” he says. “This is not an experiment. This is not a garage shop project. We wanted to do this because there’s a need for it and we wanted to use our resources to hit the scope as large as we could.”

Masks aren’t going away anytime soon—and even after the coronavirus dust has settled, the Hepius team doesn’t plan on stopping.

“When we started Hepius we had this idea: Lead with your heart and the money will follow,” DeWeese says. “There is a pandemic going on. We wanted to be part of the solution. We had faith that if we focused on solving an important problem, it would turn into a profitable business.”