Rita—a robot that seats guests, runs food to tables, and even sings "Happy Birthday"—has been tested in 10 Chili's restaurants in the Dallas area, California, and Florida. After performing correctly 99% of the time, she's now being expanded to 51 additional Chili's locations nationwide.

"To know Rita is to love her," says the SVP of Innovation for Chili's parent company, Brinker International. "Team members have realized she really is there to make their jobs easier."

If you visit a local Chili’s Bar and Grill soon, there’s a chance your food runner will be named Rita. She’s a bit over three feet tall, can carry a total of 66 pounds, and has a sweet “Happy Birthday” singing voice. She never calls in sick, always remembers your table, and makes mistakes less than 1% of the time.

We last talked to Wade Allen, Brinker’s SVP of innovation, when Chili’s began delivering chicken wings by drone in Granbury, southwest of Fort Worth. Today he told us what led to the Chili’s robot expansion.

“There were two things that we were really focused on, utilization and success rate,” Allen said. “We saw in our initial 10 restaurant test that team members were increasingly utilizing Rita over time. We also set an internal success threshold that she needed to perform her task correctly more than 99% of the time. She’s been doing that without an issue.”

Complementing Chili’s employees, not replacing them 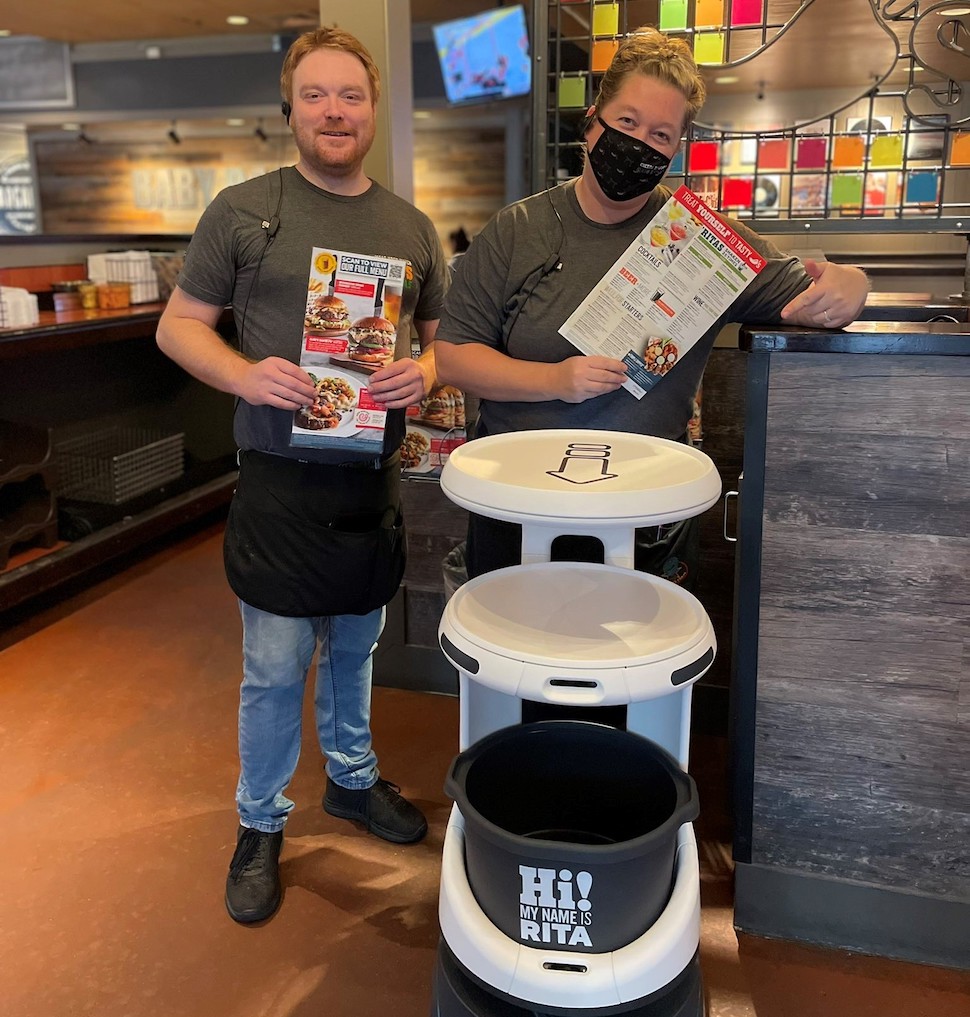 Allen says the robots aren’t meant to replace Chili’s “human team members,” but to complement them and free them to engage more with customers.

“She’s a tool intended to make their jobs easier,” he said. “The hospitality industry is about people, and we have no interest in changing that. We’re innovating in ways that make team members less likely to burn out or wear down.”

“To know Rita is to love her,” he said. “Team members have realized she really is there to make their jobs easier. Being a server, runner, or busser is hard work and Rita can shoulder some of that load, making those trips easier and leading to less exertion and more efficiency.”

What do Chili’s customers make of Rita? Allen says they’ve “genuinely enjoyed” the experience, and he has data to back it up: 82% of guests said they felt their experience was better overall because of Rita, and 77% said their server spent more time with them due to Rita’s support.

Rita is made by Bear Robotics, which has raised $117M 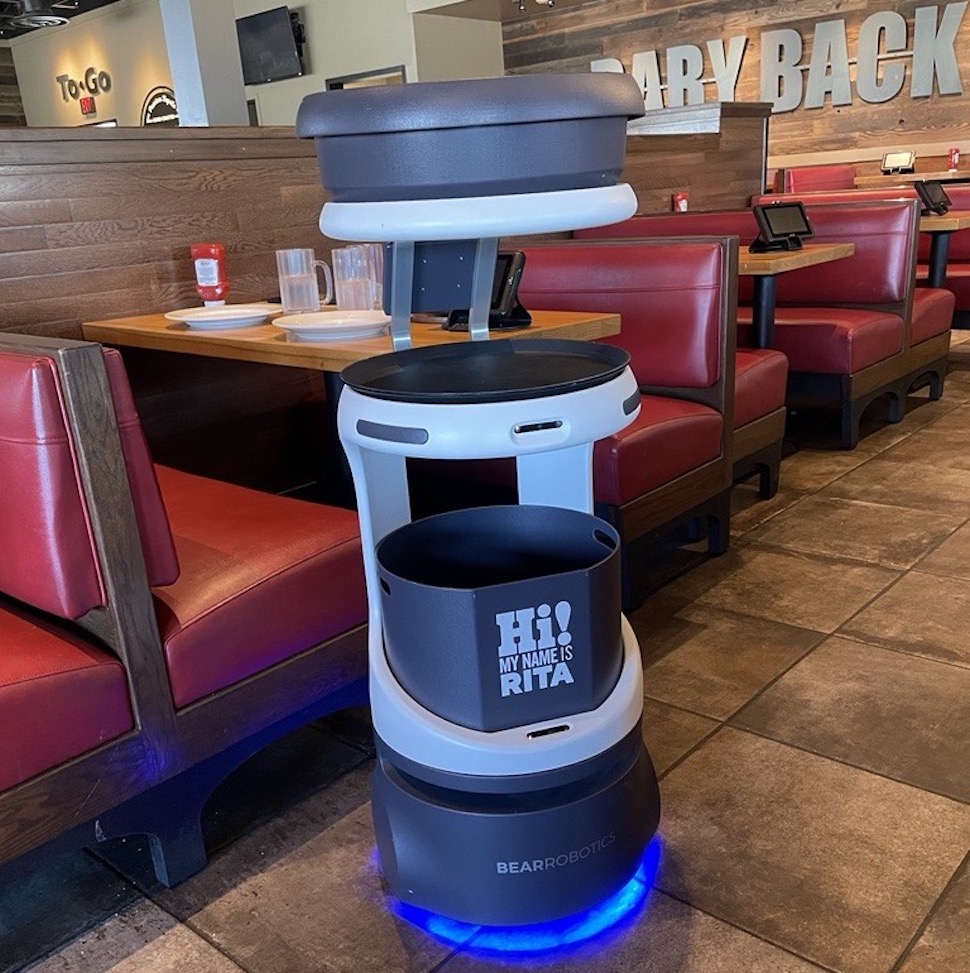 Chili’s robots are made by Bear Robotics, which announced last month it had raised $81 million in a Series B funding round, giving it $117 million in total funding to date—another sign that the trend is in for restaurant robots.

As seen above, Rita’s top two round tray holders are designed for carrying food and drinks to tables, following an AI-powered route through the restaurant to each mapped-out table. The large black bus tub in the bottom is used for additional storage or bussing tables. Visible on the top tray of Rita above is a small bus tub meant for collecting small dishes.

Rita may not call in sick, but since she’s battery-powered, she can run out of juice. However, Bear says the robot’s average battery life is between 8 and 12 hours, so she can pull a long shift before needing the 4 to 5 hours required to fully recharge. The robots are also capable of quick charging for 1 to 2 hours during downtime—say, between the lunch and dinner rushes—for another 4 to 6 hours of operation.

Bear Robotics offers an “intuitive host mode” that enables the robot to act as a host, greeting and seating customers. The robots require a high-speed internet connection to provide mapping, analytics, and instant feedback during operation.

At Chili’s, Rita is programmed to carry out her set missions of hosting, running food to tables, bussing tables, and singing the chain’s customized birthday song,.

At the robot-enhanced Chili’s locations, Rita delivers guests to their table, where a human server arrives to take the order on a TSE (Team Service Evolution) handheld device—which saves a trip by electronically delivering the order to the kitchen. When the order’s ready, the restaurants’ food runners may use Rita to carry the food and drinks to the table, allowing servers to maximize time spent with guests.

For now, Brinker isn’t planning to use the  robots at its Maggiano’s Little Italy locations. “Never say never, but that’s not in our plan at this time,” Allen told us.

But Brinker is definitely planning to continue its move toward future tech. “Technology and robotics are absolutely part of the future of dining and restaurants,” Allen said.

See Rita in action in DFW

Want to see Rita in action for yourself? Here are four DFW-area Chili’s where the robots are whirring about with plates full of baby back ribs:

If you want to see video of Bear’s robots doing their thing, here’s one of them serving customers at a California pizza chain.