Power of Towers: How Dallas’ Tallest Buildings Continue to Trumpet its Future

Innovation and construction technology have redefined what’s possible for Dallas' tallest buildings. With the state's largest adaptive redevelopment project—a $450M revival of the 52-story First National Bank Tower—back on track at 1401 Elm St. with Todd Interests at the helm, the downtown towers are being bought, sold, and given new lives as the city continues to grow.

A view of the Dallas skyline looking south from Uptown. While most DFW areas saw little change in direct rents, Uptown/Turtle Creek was an exception, showing increases in average rents. [Photo: Michael Samples]

The giant monoliths that form a city’s skyline do more than just become a symbol to people around the world. The towers are drivers of commerce and homes to thousands of workers and an increasing number of urban dwellers. And, innovation and construction technology have redefined what’s possible for these tall buildings.

In Dallas, the skyline’s towers form the image of a city that rose near the Trinity River and has become iconic worldwide.

“The city is beautiful,” Todd Interests’ founder and Principal Shawn Todd told Dallas Innovates. “In a lot of places like Denver they look at the mountains, or if you’re in California you might be looking at the beach, but in Dallas people are sitting up on the rooftops and looking at the skyline.”

The towers of downtown Dallas have been in the news a lot in recent weeks. Most recently, there was an announcement of a new team led by Todd Interests taking over the redevelopment of 1.5 million-square-foot, 52-story First National Bank Tower, the largest vacant space in the urban center and now the largest urban redevelopment project in the state of Texas.

How technology is helping make the redevelopment deadline

Once completed, the First National Bank Tower—designed by noted Dallas architects George Dahl and Thomas Stanley—will house a combination of hotel rooms, apartments, retail, and office space. Shawn Todd says the project is the largest adaptive restoration undertaking in the city’s history, the current largest project of its kind in the state, and one of the largest in the country.

But the project has to actually get done on-time, first. 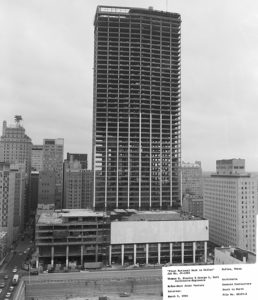 The Grecian marble was being attached in this construction photo from 1964. [Photo: Courtesy Todd Interests]

The bank building redo is a project with strict timing issues, as the developers must finish it by the end of 2020 to get nearly $100 million in historic tax credits and $50 million in Dallas tax increment financing. All that is needed to make the project viable.

Developer Shawn Todd says his firm is moving ahead as quickly as it can to make that deadline, and emphasized the importance of what he referred to as the last truly historic project in downtown Dallas.

Luckily, technology is available to make it all possible.

The key to the redevelopment of the project once known as “The Drever” is restoring the more than 13,000 pieces of Grecian marble to their historical state. That act guarantees the historical tax credits the project would earn and make the entire project possible.

“One of the reasons this is the largest historical project in the history of Texas, and one of the largest in our nation’s history, is because of all the beautiful marble,” Shawn Todd says.

The marble is so important to the project that had Shawn Todd not been confident it would be finished by 2020, it would have been a deal-breaker.

So, Todd Interests and partners such as Andres Construction and a company in China are working aggressively to prepare the marble and place it back on the building’s facade and interior locations. To do that, the marble was sent to China so the stone pieces could be recut.

“Historically, the marble was about 3 inches, heavy, big, and it was just slabbed up there and sometimes pinpointed in,” Philip Todd says. “Over time, the marble has been falling off the building and becoming a risk for people below. But also, it just made the building look real shoddy.”

To get the job done, the contractor had to remove all of the marble from the building. Then, with a computer-aided system, the marble has to be cut down from 3 inches to 1-inch thick pieces. “We cut it into thirds, and then you have three times as much marble to account for all the breakage that happened for marble just falling off,” Philip Todd says.

Philip and his brother, Patrick (another Todd Interests partner), traveled to China to witness the process in-action. The two saw how the aluminum strips were cut, molded, and attached to the marble, as well as how the marble was packaged, protected, and prepared for shipment.

READ NEXT Placemakers: For Todd Interests, Revitalizing a Downtown Dallas Neighborhood is a Family Affair

The stone is the same Pentelic marble quarried to build the Parthenon, the iconic building of ancient Greece.

“The marble that’s on the exterior of the building is something like 13,000 plus pieces, and we have historic tax credits on the federal and state side for the building,” says Philip Todd, Shawn Todd’s son and a partner in the company. “Getting that marble back into historical form and approved by the National Park Service and State Historic Preservation Office is a huge, monumental task for the whole project.” 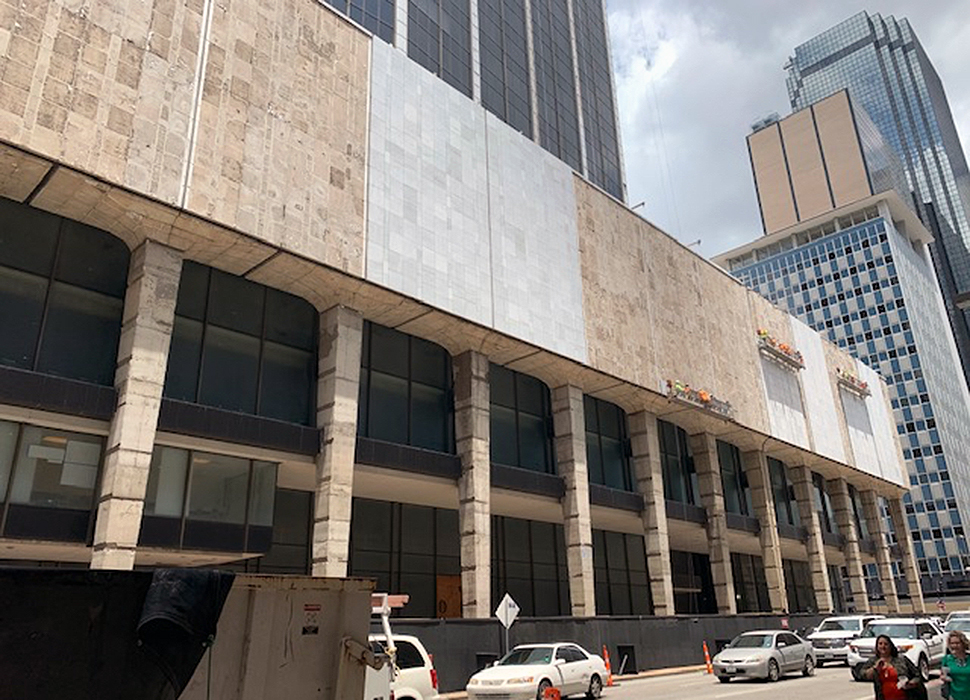 Workers reattach marble to the exterior of 1401 Elm as part of its redevelopment. [Photo: Courtesy Todd Interests]

Other technologies are being used to help Todd Interests and Andres Construction meet their deadline.

Recently, the firm used a 360-degree camera to visualize all apartment units that are being framed out now.

“He’s placed them in every single unit—all 324—and mapping all the walls for the units, and so then the contractor and architect can review them from their desktop. Then we can also review in real time and look at the changes,” Philip Todd says. “I mean, it’s just amazing.” 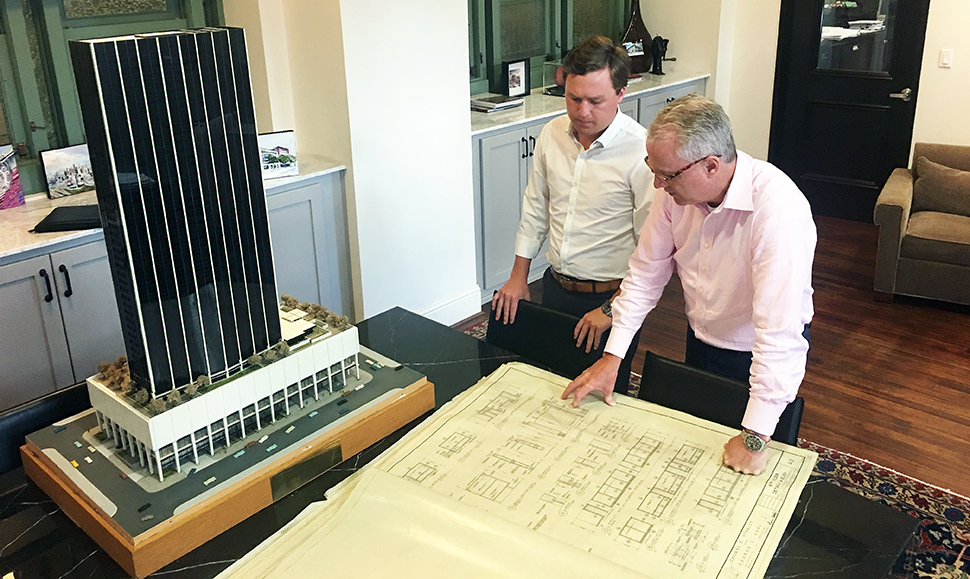 Philip and Shawn Todd look over the original blueprints for 1401 Elm made by architects George Dahl and Thomas Stanley. [Photo: Lance Murray]

He says sophisticated software also helps the contractors coordinate the schedules of the roughly 500 workers who are in the building every day. That software helps with the delivery of supplies and materials, such as the 80,000 pieces of wallboard being delivered by trucks that will be used in the project.

Technology allows the team to make adjustments and changes in real-time.

“The software that the contractor and the architects and the subs work with allows them to make almost instantaneous changes to plans,” Philip Todd says. “Before, it would take them days and weeks to change.”

Shawn Todd says the lessons he learned redeveloping One Dallas Center should pay dividends in the First National Bank project.

Farther east in downtown, Todd Interests announced that it was planning a 17-story tower at the intersection of Jackson Street and Cesar Chavez Boulevard, not far from Deep Ellum and the Farmers Market. It’s a part of the East Quarter development already underway by Todd Interests. East Quarter is a neighborhood of historic buildings the company is renovating along Commerce, Main, and Cesar Chavez into creative office spaces. The East Quarter already is home to companies such as OrderMyGear.

Before the announcement that Todd Interests was taking over the First National Bank Tower redevelopment, Goldman Sachs Asset Management sold the recently opened 1900 Pearl in the Arts District to The State Teachers Retirement System of Ohio for $180 million. That’s roughly a whopping $700 a square foot for the 25-story building, which is adjacent to the Federal Reserve Bank of Dallas and the Dallas Symphony Orchestra and Meyerson Symphony Center. 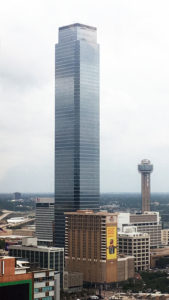 Bank of America Plaza, the city’s tallest building, is up for sale. [Photo: Lance Murray]

It doesn’t end there.

Recent good news about leasing in downtown is helping drive the figurative planting of “for sale” and “closed for remodeling” signs in the urban center.

“If you look at the leasing activity in the central business district in the last 24 months vs. the previous decade, there is no argument that a paradigm shift is occurring,” Chad Cook, CEO of Dallas-based investor Quadrant Investment Properties, told The Dallas Morning News. “The mojo has been incredible the last 12 months in particular.”

Quadrant has put its recently remodeled 22-story Saint Paul Place on the market, hoping the investment in the building will pay dividends.

If you read our story last year about whether skyscrapers are still a force in downtown Dallas, you know we are fascinated with the buildings that reach high into the sky. The recent news only bolsters our conclusion in that article that they remain a vibrant force in Dallas’ urban center. 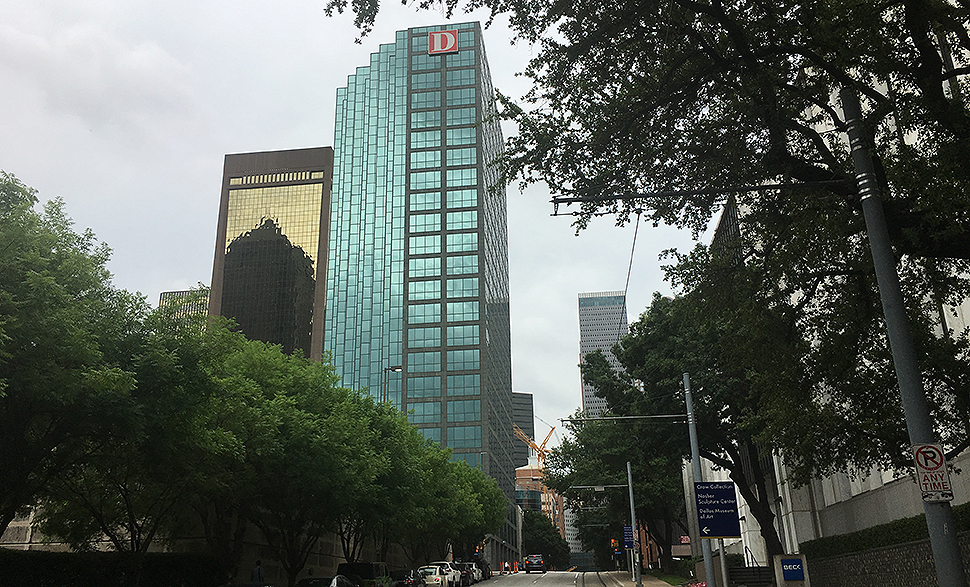 Saint Paul Place, the home of D Magazine Partners, is one of the towers on the market in downtown Dallas. [Photo: Lance Murray]