The dual-branded Aloft and Element hotel will be the first in Texas to use Savioke’s indoor delivery robot.

Room service will have a tech-infused twist at the dual-branded Aloft and Element hotel near Dallas Love Field.

Resembling a sleek, hourglass-shaped trash can, the 3-foot-tall Relay robot named Botlr can greet guests at their doorways with extra towels, a toothbrush, or caffeinated beverage pick me up.

The hotel will be the first in Texas to use the indoor delivery robot produced by San Jose, California-based startup, Savioke.

In about two weeks, Botlr will go to work full time at the Dallas hotel delivering small items that can fit in a 0.75 cubic foot compartment at the robot’s top.

NOT YOUR AVERAGE DELIVERY ROBOT

Hotel employees load up the payload with requested items and punch in the guest’s room number on the robot’s touch screen.

Botlr takes it from there, navigating the hallways even remotely operating the elevator during its journey to a guest’s room. 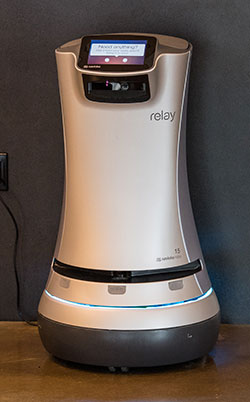 “It’s got smart-enough technology so that it’s constantly re-evaluating what’s the best route to take to get to whatever location it needs to be,” said Rob Buehler, Savioke’s regional director of sales.

Unlike other delivery robots that require a magnetic strip or beacons to get around, Botlr is autonomous, he said.

Before the robot begins work, Savioke employees will manually drive it around to create an internal map of the facility.

A combination of internal sonar and LIDAR sensors as well as 3D cameras enables the robot to avoid collisions with any obstacles. And if there’s not enough room on the elevator, it can sense that and wait like any respectable human.

Once it arrives at a guest’s door, it taps into the telephone system to call the room. As the door creaks open, Botlr’s payload lid whips open allowing guests to retrieve the items.

To express their gratitude, guests can tweet at Botlr.

“We actually built in a little delay before he leaves the room after delivery so people can pop those selfies and put them on social media,” Buehler said.

The novelty is what drew the hotel to the robot not a notion of reducing labor costs.

“It’s not displacing anybody; it’s not replacing anybody, it’s just adding to more amenities and luxuries that we can offer to our guests,” said Arzu Molubhoy, chief financial officer for Carrollton-based Atlantic Hotels Group, which is the owner/operator of the Dallas hotel along with Starwood Hotels & Resorts Worldwide Inc., and Civitas Capital Group.

From voice-activated hotel rooms to keyless entry, the Aloft brand has been known in the hospitality industry for integrating tech features into its properties.

Its Cupertino, California hotel was the first to pilot Savioke’s Relay robot in 2014.

Now, Relay robots operate in more than 20 hotels with 30 more soon to be installed across different hotel brands. While hospitality is a focus, Savioke also is piloting operation of the robot in high-rise apartment buildings, hospitals, and elder-care facilities.

Hotels pay a $2,000 fee per month, which includes use of the robot and covers any installation, maintenance, and 24/7 support from Savioke’s robot operations center.

“If a robot is out making a delivery and something has happened and the delivery takes too long, we actually see that from our operations center and most times we can actually correct the issue remotely,” Buehler said.

The robot’s appearance probably won’t be getting a makeover anytime soon, but Savioke is working to make minor tweaks to its features such as a room ushering function and a mingle option that allows the robot to interact more with guests.

“It’s inevitable and we should embrace it. It is a disruption that’s going to happen.”

In the future, Buehler foresees the robot’s potential to affect the physical space. For instance, instead of having ice machines on every floor, hotels could use one central location.

“We can recover that space and recover that energy usage by putting a single ice machine downstairs and having Relay run up ice as needed,” Buehler said.

While the “personal [human] touch is still extremely valuable and important,” robots are part of hospitality’s future, Molubhoy said.

“It’s inevitable, and we should embrace it. It is a disruption that’s going to happen,” she said. 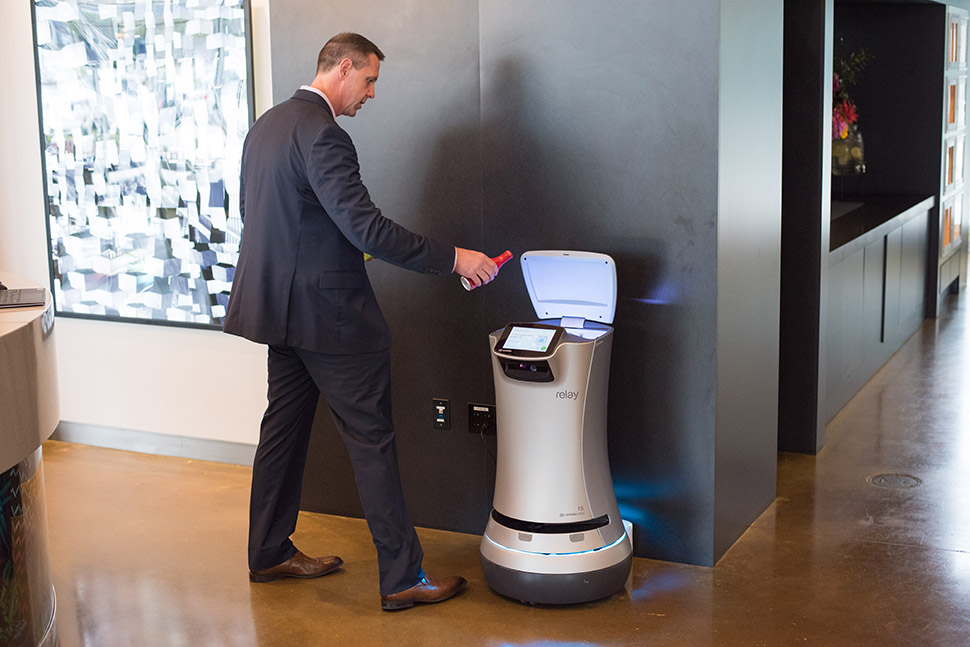 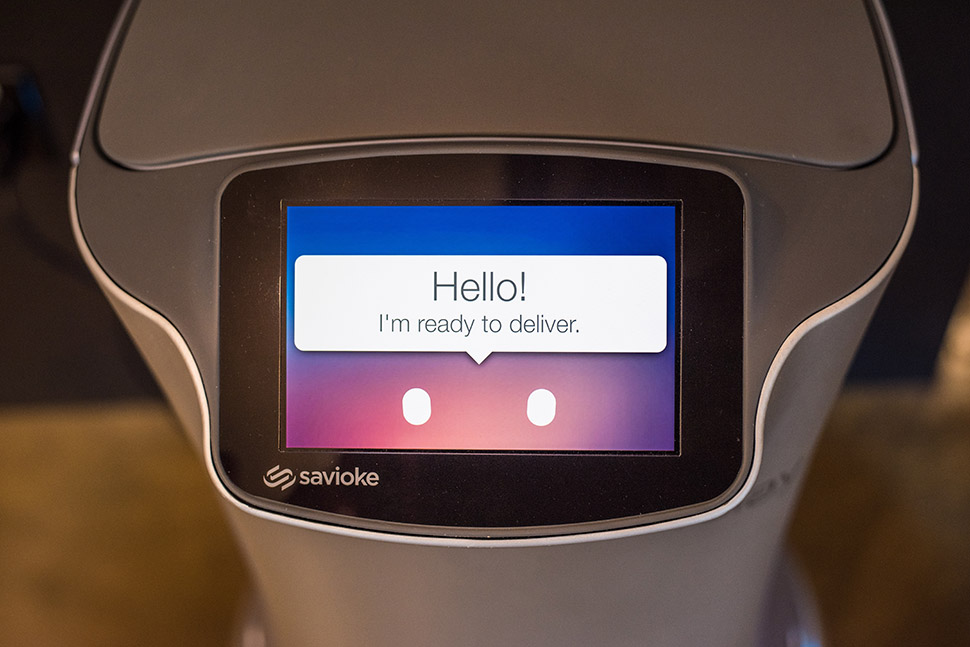 The robot communicates via messaging on its touch screen. [Photo: Michael Samples] 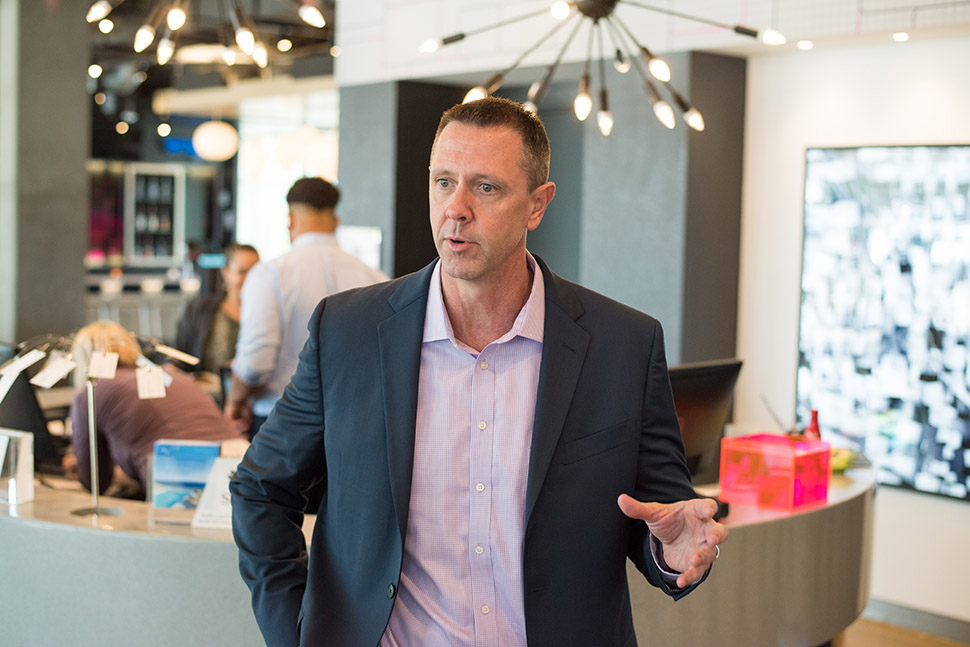 Buehler discusses the functionality of the 3-foot-tall robot. Unlike other delivery robots that require a magnetic strip or beacons to get around, Botlr is autonomous. [Photo: Michael Samples]