Former musician Corey Mellick dropped out of college to go on tour. But after meeting his now wife at a gig, he left the life on tour to become a consultant. Eventually, he realized he had the chops to start his own company—so he founded Amplifi, using his musical skills to make it a global data driven management consultancy that works with some of the largest brands in retail, manufacturing, and distribution.

In 2008, Corey Mellick started Amplifi, a data-driven management consultancy based in Addison, with the high hope of transforming the industry. With 123 employees in the U.S. and Europe, Amplifi set out to revamp information management strategies and how solutions are delivered.

But before becoming the data CEO that he is today, Mellick was a college dropout—one who worked as a musician that toured with a band and played for big names in the studio.

With a passion for rock ‘n’ roll and skyrocketing levels of rebellion, Mellick left his hometown, Scottsdale, at 16 years old to take the music world by storm. From a young age, he had been fascinated with music: He even calls himself the “odd one out” in his family.

But music allowed Mellick to utilize his creativity and out of the box thinking. “It was life and I played constantly,” he recalls.

Running to a small town in Arizona, Mellick finished high school while working multiple jobs—from telemarketing to roofing—in order to pursue his career. 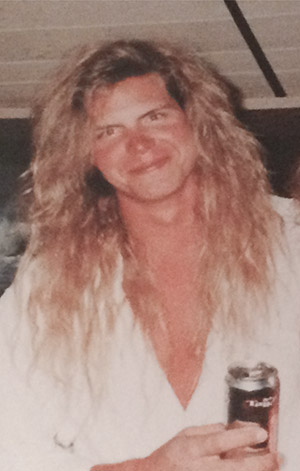 Shortly after starting at Arizona State, Mellick’s music career finally took off. He began traveling with bands; playing at popular clubs. Fast forward to a gig at The Library Bar in Arizona and Mellick had met the love of his life (and now wife), and quickly realized that he needed to refocus on his future to start providing for a family.

With the help of a good haircut and diverse resume, he landed a job as a consultant.

“Because I was working in the studio so much, I was really used to playing with computers,” Mellick told Dallas Innovates. “Consulting translated really well into the technology space. I received a few certifications and later realized I could make more money as a salesperson, so I got into sales and starting climbing the corporate ladder.”

After working for several of the largest and fastest-growing companies in the country, he was asked to run global sales for a company in New York City. However, he turned down the opportunity because he didn’t want to move his family to Manhattan.

It was traumatizing for Mellick. He put down his head, changed companies a few more times, taking some from scratch to acquisition. Eventually, he decided to take the leap and do it for himself.

“My dad always told me it’s best to run your own company,” Mellick says. “You want to be the guy saying ‘Yeah you,’ not ‘Who, me?’”

With the help of his uncle, a finance and accounting veteran, Mellick started Amplifi in 2008. It was going to be an e-commerce company, and pretty much all it had to its name was a “cardboard box for a desk and a smile.”

Amplifi operated on a business model that efficiently lets companies and consumers buy and sell things over the internet, but, the company’s execution and focus was undeniably unique.

“The name Amplifi has nothing to do with being a musician,” Mellick says. “Believe it or not, Amplifi is about how we make everyone around us bigger and better today. It may be just a verb, but this verb sets us apart from other consulting firms that think way out into the future. At Amplifi, we are all about the now.”

Keeping this mindset, Mellick built a diverse team that could take great companies with great products and maximize their digital transformation strategy. The intent was to launch global sites, increasing revenue and driving brand awareness.

And as technology evolved, so did Amplifi’s focus. Mellick noticed that his startup was building great experiences, websites, search and navigation, and mobile applications, but businesses weren’t being ‘amplified’ to their highest potential. Mainly because they didn’t understand who their customers were or what products that were selling.

In 2016, Amplifi pivoted to become a data driven management consultancy that would fix the data issues that companies were combating. Mellick wanted to provide a single source of truth for customers.

Since Amplifi’s transition, the company has expanded and generated more traffic, as well as elevated other businesses via data analytics. In the past year alone, Amplifi has been selected by Conagra Brands, Jackson Family Wines, Independent Purchasing Cooperative (IPC), Kaman Distribution Group (Kaman), and others to design solutions and “harness the power of their #1 asset … their data.”

And many remain shocked by Mellick’s road to success. He’s not, though.

“When you are a musician and understand music and music theory, it means you are analytical and creative. Those are skills that will take you so far in marketing, sales, branding, design, and IT,” he says. “Music transforms to color, branding, and design. It makes you very aware and has helped me be more creative, develop sales materials, and come up with outside of the box thinking.”

Since it’s humble beginnings, Mellick has expanded Amplifi beyond its Addison headquarters. Today, he has employees in Atlanta, Chicago, LA, and even Europe after a recent acquisition of a UK company.

Within the next five years, Amplifi’s team plans to work rigorously to be the “number one data consultancy on the planet.” That means all of their efforts are specifically geared toward helping clients around the world boost their data strategies.

Mellick is most proud of the legacy he has built today. For those hesitant to take the entrepreneurial leap, he suggests having a willingness to be flexible, change direction, or pivot as needed.

“Some people say, to be successful, you need to be laser focused on what you do. I say, track what is needed—what the customer needs,” he says. “That doesn’t mean change your business entirely, just be able to understand what your customer needs and pivot to that as appropriate.”