Poppi continues to get the Hollywood treatment after signing a deal with Rohan Oza on "Shark Tank" in 2018. Some big pop culture names—The Chainsmokers, 24kGoldn, Kygo, Kevin Love, Ellie Goulding, Olivia Munn, and Nicole Scherzinger—are joining in the beverage brand's latest funding round, along with Oza's CAVU Ventures and a group of social media influencers. 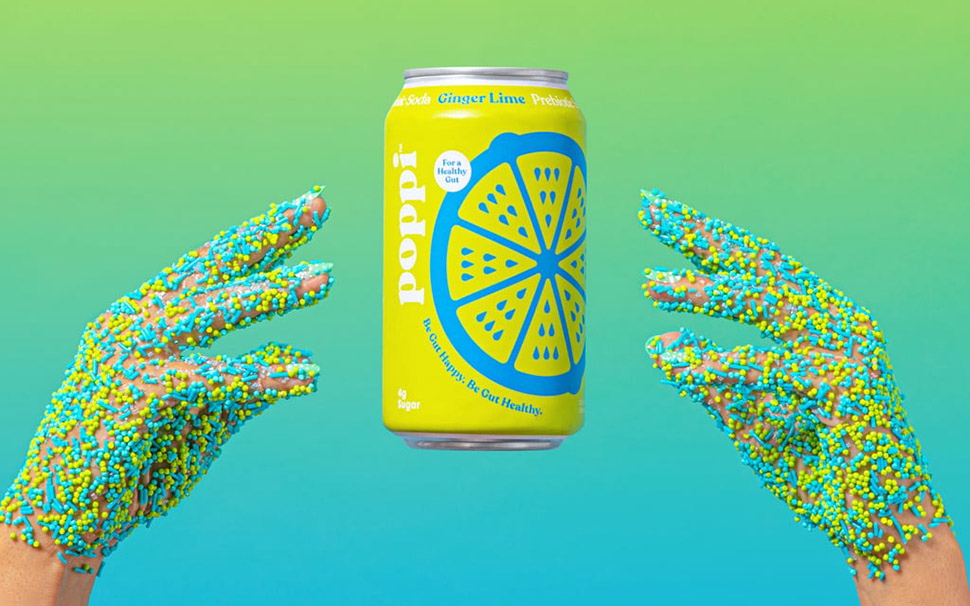 Dallas-based prebiotic beverage brand Poppi is taking on “big soda” with its clean, better-for-you product options—and it’s gotten some star-powered backing to do so.

Poppi today announced a $13 million funding round to expand distribution, scale its internal team, and invest in more marketing opportunities.

Some leading social media influencers also joined in, including Chantel Jeffries, Bryce Hall, Noah Beck, Josh Richards, Griffin Johnson, and Blake Gray. That’s fitting considering that Poppi went viral on TikTok in May, raking in 8.3 million views (as of Aug. 30) for an explanatory video. Add to that the 5.3 million views from a video of J.Lo posting about the drinks.

Having CAVU—and the slew of celebrities—on board will help pave the way for Poppi to become a “beloved functional soda brand,” the team hopes. CAVU’s previous notable investments include Oatly, Beyond Meat, One Bar, BAI, and Hims & Hers Health.

This isn’t the first time CAVU’s been on board. Poppi landed a major deal with the firm’s co-founder, Rohan Oza, on “Shark Tank” in December 2018. Oza is a notorious brand builder who’s been a recurring guest on the TV show.

He calls Poppi the “soda for the modern generation.”

“Poppi is disrupting the multi-billion-dollar soda category by offering great-tasting, low-sugar bubbles with benefits wrapped up in a culturally relevant brand,” Oza said in a statement. “As a digital-first celebrity and influencer favorite, Poppi has exploded into the marketplace over the last year and a half, growing exponentially both online and at retail.”

According to the Poppi team, it experienced an annual growth of 7,509 percent throughout the past year. In SPINS’ multi-outlet segment of the functional soda beverage category, Poppi outperformed all competitors, coming in as the No. 1 brand.

The ranking comes at a time when functional soda is staking its claim as the fastest-growing beverage category, up 465 percent as of March 21.

Founded by husband-and-wife duo Stephen and Allison Ellsworth, Poppi is a prebiotic soda made with gut health in mind. Inside each can is a combination of real fruit, a tablespoon of apple cider vinegar, and sparkling water, creating a refreshment that’s both tasty and healthy. The co-founders say it’s the “perfect balance of gut-friendly prebiotics that aid in digestion, immunity, and glowing skin.”

The Ellsworths originally taste-tested Poppi at farmers’ markets across Dallas. Allison began using apple cider vinegar (ACV) for her chronic health issues and realized its gut-healing capabilities. She quickly set out to mix up a digestive health product that would make ACV enjoyable and beneficial for others sharing her experience.

After finding local success, the couple launched the brand nationwide last year—and have since expanded it to thousands of retail locations across the country. It’s now sold for $2.49 a can in nine flavors at more than 7,500 storefronts, including Target, Safeway, Kroger, Publix, and Whole Foods. It’s also available on Amazon.

Backed by its newest investors, Poppi says it now plans to continue its mission to reinvent the beverage category with clean, functional soda.

“We’re really excited to have these new celebrity partners as an extension of our Poppi team—we have no doubt that they will play important roles in helping us scale awareness and grow our community as we continue to challenge big soda,” Stephen Ellsworth, who is Poppi’s CEO, said in a statement. “We firmly believe in the product we’ve created and consumers’ desire to choose prebiotic soda made with far less sugar, no artificial ingredients and gut health benefits over other soda options on the shelves today.”