Hispanic chambers from Dallas, Irving, and Fort Worth and Regional Hispanic Contractors Association gathered area business leaders recently to discuss the state of the economy as well as trends and challenges businesses should address in preparing for the future.

Dallas County Community College District Chancellor Joe May has seen the devastation a natural disaster can bring to a community.

While at the helm of the Louisiana Community and Technical College System multiple hurricanes roared ashore changing the course of many lives.

In 2008, Hurricane Gustav left campuses in the Louisiana college system damaged and without power for weeks. The storm displaced students and employees from their homes. Thousands of students decided not to return to class, instead picking up temporary work in the relief efforts. In neighborhoods, May remembers not being able to walk through without stepping on some sort of debris.

But out of tragedy comes triumph in the spirit of a community — and its business sector.

AFTER DISASTER, THINK OF WAYS TO MAKE LASTING ECONOMIC IMPACT

May urged the crowd at last week’s State of Hispanic Business in North Texas to think of the lasting impact and not just immediate opportunities that open up after a natural disaster.

The event presented by the Hispanic chambers from Fort Worth, Dallas, and Irving as well as the Regional Hispanic Contractors Association brought together business leaders across the area to discuss the state of the economy and how trends and recent events will affect the future. 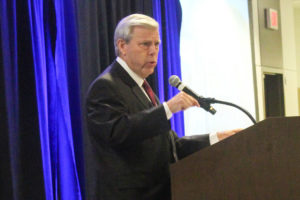 As Houston begins rebuilding after Hurricane Harvey, there are ways the Dallas business community can offer support as its economy recovers, too, May said.

“The long term is really looking at how we can continue to grow the economy, meet the needs and, for us, grow businesses and inspire people to meet those needs,” May said.

He named at least two entrepreneurs who founded businesses following hurricanes in Louisiana. And, noted how a group of citizens united after Hurricane Katrina to address economic needs by founding Greater New Orleans Inc.

“People began to use their knowledge to solve the problems of others and in doing that, they created new businesses and new opportunities and were able to accelerate the growth of the economy and the recovery,” May said.

He said small businesses have the power to drive economic growth, a statement echoed in a panel following May’s keynote address.

Their talk outlined what attracts people to North Texas, how businesses can capitalize on economic trends, and the workforce needs of the future.

“When we do work together, all boats rise.”

Rosa said it’s a combination of factors bringing people to the region from its leadership and planning to the area’s education systems and favorable business climate.

“Companies love this region because they see it as a place they can grow. A place they can have access to the things that will help them succeed in the future,” Rosa said. 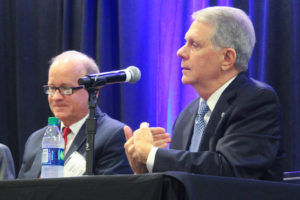 Eastland touted Dallas Fort Worth International Airport as “the economic engine, that’s made us what we are,” while stressing the importance of regional cooperation in making it happen and encouraging business leaders to recognize those opportunities for collaboration.

“When we do work together, all boats rise,” Eastland said.

TAKING NOTE OF CHALLENGES AS THE REGION GROWS

Though the region is experiencing tremendous economic growth, we must not become complacent, Spaniolo said.

“We won’t continue to make progress unless we are all resolute and vigilant at making sure the needs of our region are met,” he said.

One way to ensure that is residents and business leaders taking a proactive approach in getting to know legislators and making sure they understand the needs of the region, he said.

“We won’t continue to make progress unless we are all resolute and vigilant at making sure the needs of our region are met.”

Keeping the quality of life up means there will be a price to pay, Rosa said.

He said the region must face that it will become more expensive.

“So, we aren’t going to go out and sell ourselves as the cheapest place to put your corporate headquarters or your manufacturing plant,” Rosa said. “…But, we can still be the best place.”

FOCUSING ON TALENT ATTRACTION, COLLABORATION AS VEHICLE FOR GROWTH

Gengelbach said a critical piece in economic development that often is overlooked is attracting the labor force.

He said the Fort Worth chamber is taking a more proactive approach to bring more talent to the city. The Dallas Regional Chamber also has stepped up its talent attraction with the Say Yes to Dallas campaign, which targets recent college graduates and millennials.

Rosa said corporations are increasingly interested in where the talent wants to live.

Another trend he’s noticed is an uptick in manufacturing projects.

“We are known and branded as an office place and high-tech place — and we are all those things — but there is something fantastic about making products and selling those products outside of your borders. Then, having those sales come in and feed those great jobs,” Rosa said.

Beyond talent, Gengelbach suggested small business owners should step outside of their comfort zones to understand what’s going on in their communities, which could ultimately help their businesses grow.

He said giving existing employers and small businesses in the area tools to succeed is “the most value we can spend,” as a chamber.

“I think that’s the wave of job creation in the future that involves the least amount of resources and the greatest impact,” Gengelbach said.

Breaking down institutional silos — such as with the multiple business chambers — will also aid the economic development of the community as a whole, he said.

One quick signup, and you’ll be on the list.